The World Cup premiered a circuit in Les Gets with a test that was supposed to be very intense, and it was. From the start a high rhythm was imposed that canceled Mathieu Van der Poel, the victory went to Nino Schurter, who won one by one all those who tried to follow him. 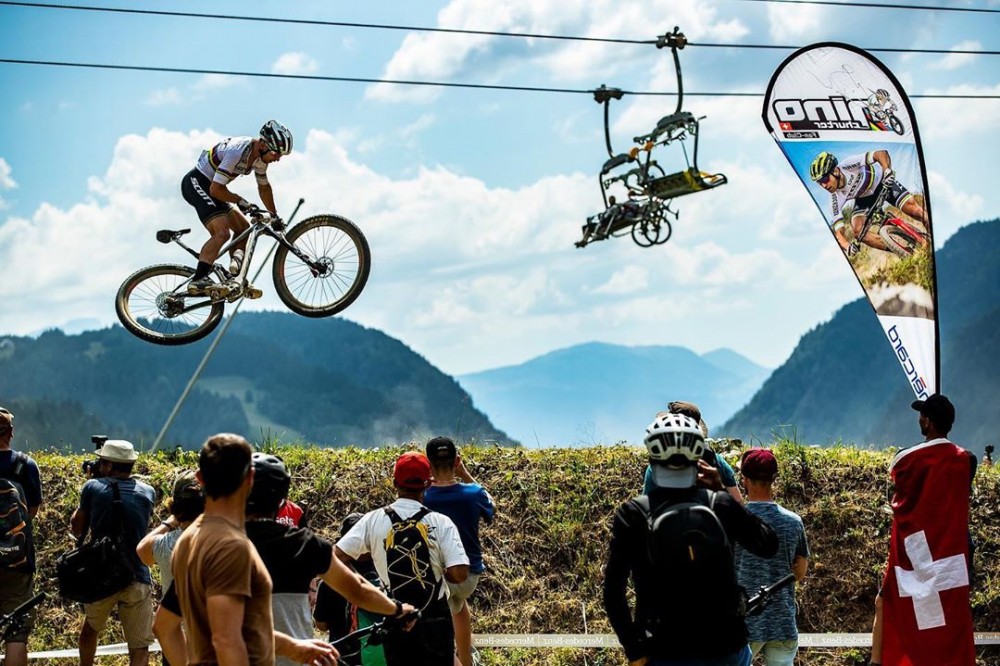 Nino Schurter wins the World Cup in Les Gets 2019

As soon as the green lights of Les Gets lit up, the race started very fast, so much that the first climb looked like a sprint with at least 6 of the favorites rolling in a group. A few meters the race took a bit of calm and Avancini and Koretzky alternated the head of the race with Nino Schurter behind them. Van der Poel was delayed and rolled into position 10. 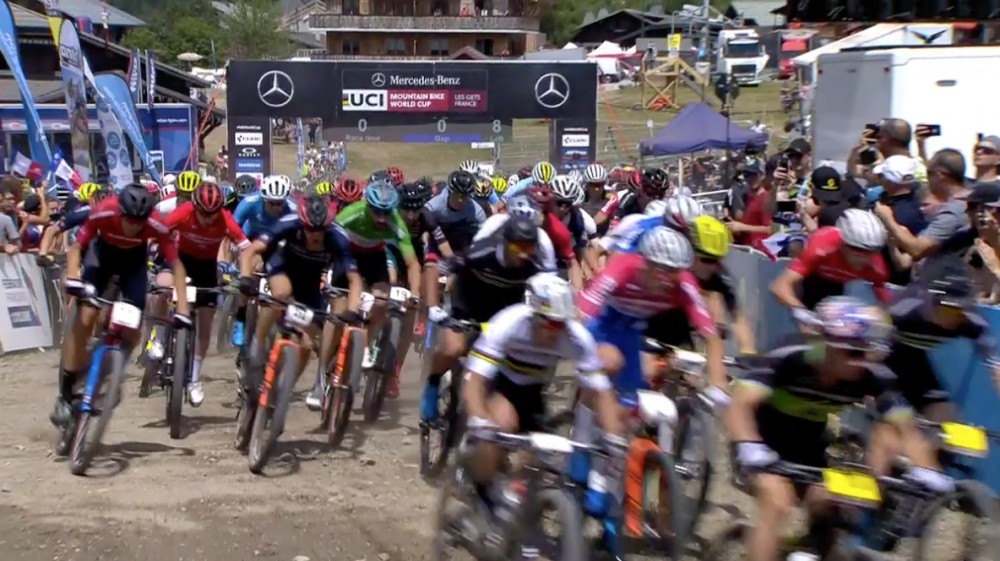 At the start of lap 2, Nino Schurter led the race with Avancini to his wheel and pulling a group of 6 bikers. Van der Poel was losing positions, he was already on the 18th, while Avancini and Schurter increased the pace on each climb. 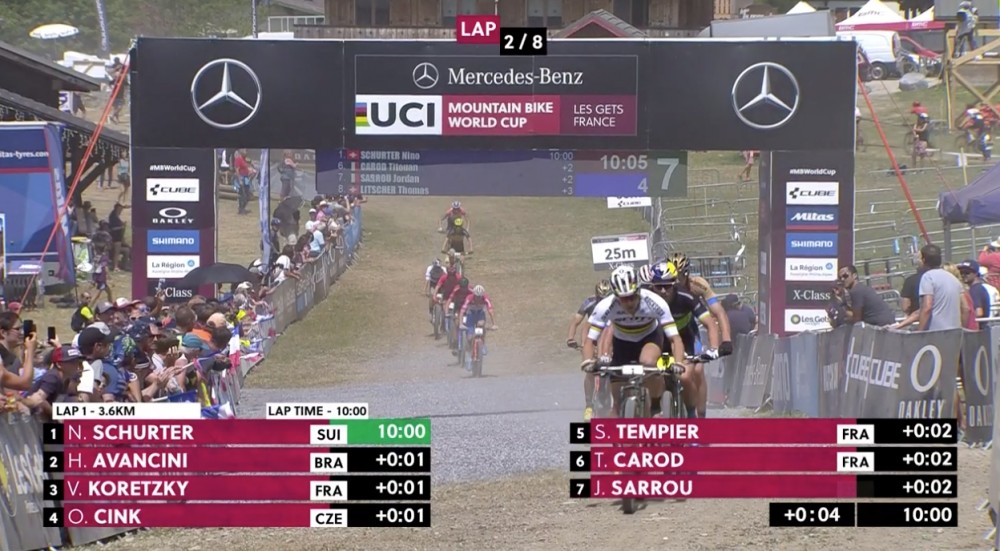 In the first venue of the World Cup, Albstadt, Van der Poel said that a strong start to the race had left him out of the race. It seems that Schurter-Avancini took good note of those statements and launched the same strategy here at Les Gets. 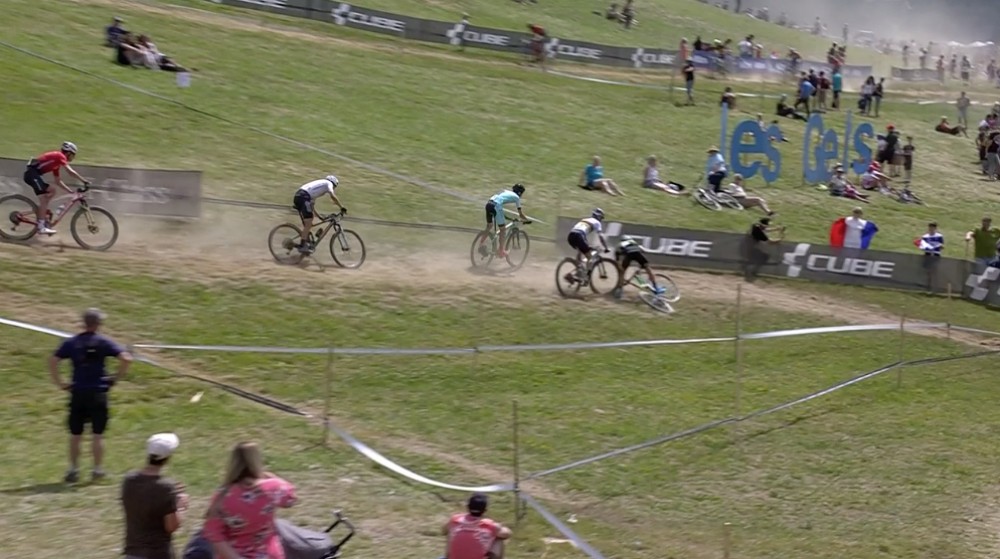 Before finishing lap 3, Avancini had a small fall in a downhill that dragged Schurter, but they soon recovered and put themselves back to the head in a few meters. Mathieu Van der Poel was still "touched" rolling in the position 19 and 24 seconds away of the first.

The Frenchman Stephane Tempier, of the Bianchi team, rolled in first position during almost all the lap 3, while Van der Poel was losing time and already added almost 1 minute away from the first position. 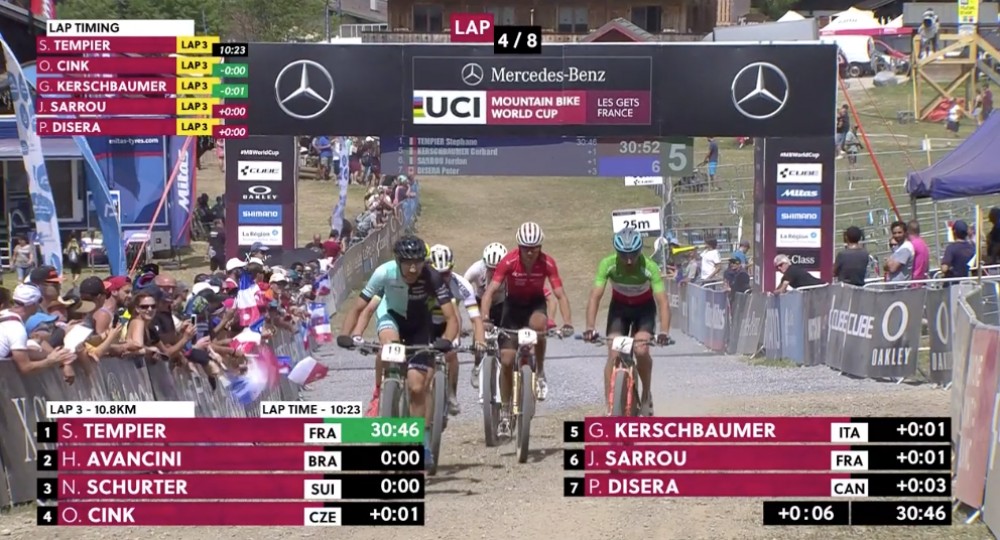 Avancini and Schurter continued to dominate the race with a leading group that included Kerschbaumer, Tempier and Ondrej Cink. The latter tried an uphill attack with which he intended to surprise Avancini, as happened in Vallnord. But this time it did not go so well and he could not let behind the Brazilian. 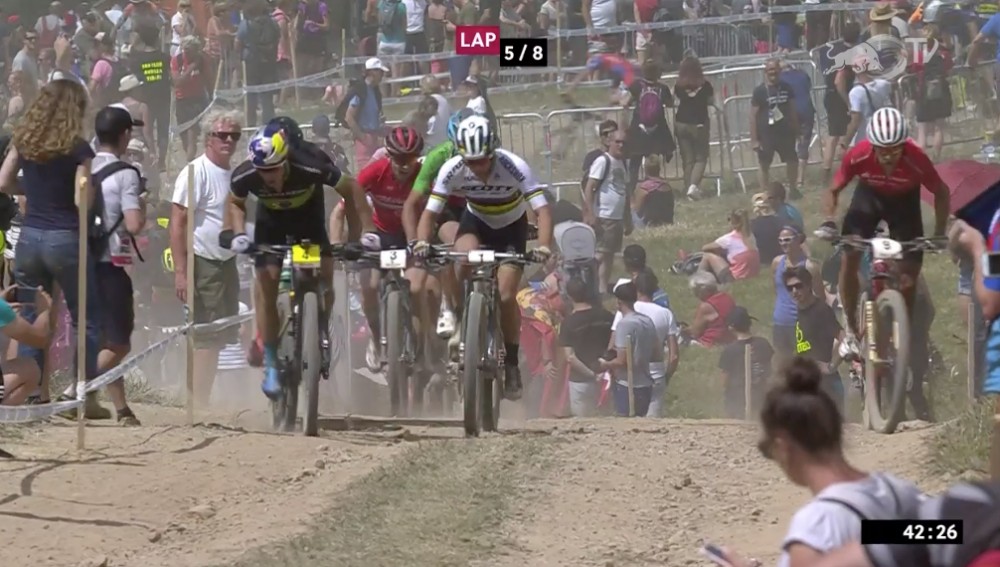 Very delayed and with his eyes fixed on the ground, Mathieu Van der Poel was still pedaling although with very bad sensations. He did not look like he was going to be in the fight for victory. 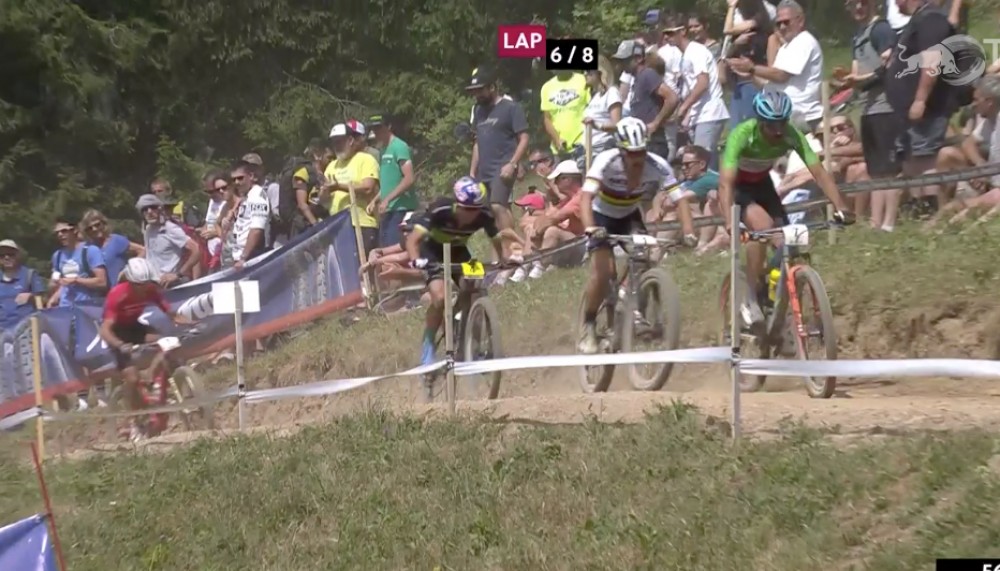 Three laps to go, the Italian Kerschbaumer took command of the leading group in which were also Avancini, Schurter and Ondrej Cink. Tempier went down the pace because he could not keep up with the first. 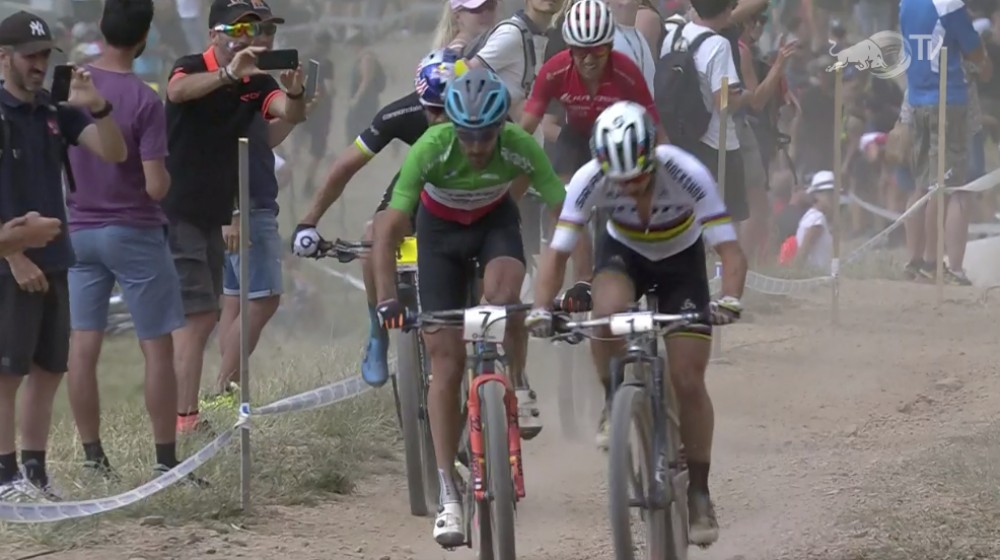 Nino Schurter launched a sustained attack during the penultimate lap, he increased the pace in the middle of a climb and only Gerhard Kerschbaumer could follow him, Avancini gave way. In the following downhill Nino could even get some advantage with the Italian but in the refreshment area they returned to ride together.

Without looking back at any time Nino Schurter rose the pace again and again whenever he could and little by little he left alone, but at the beginning of the last round Kerschbaumer could reach him and the final fight was served. 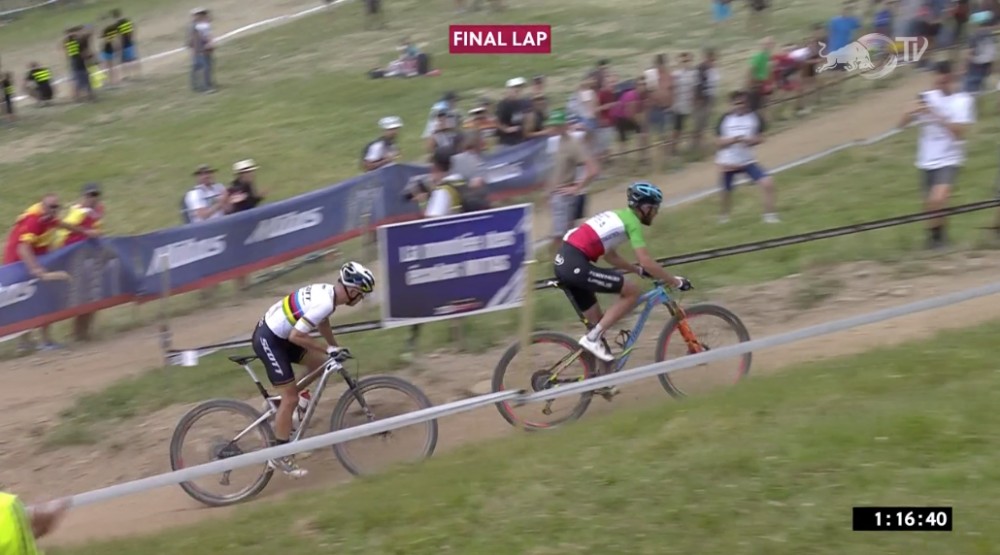 In the same way he did in the previous lap, Nino Schurter attacked sitting, put a high pace and Kerschbaumer gave way, he could not follow the World Champion. 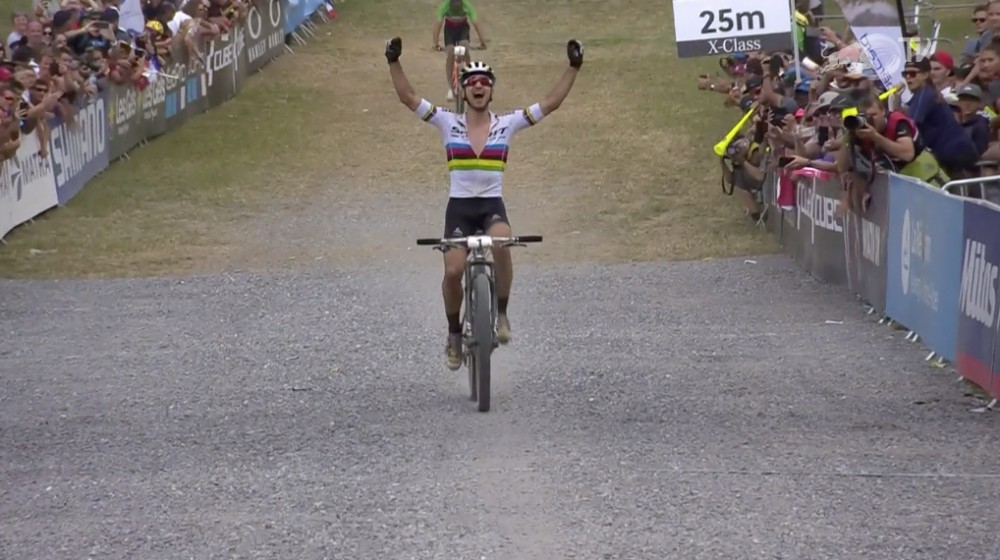 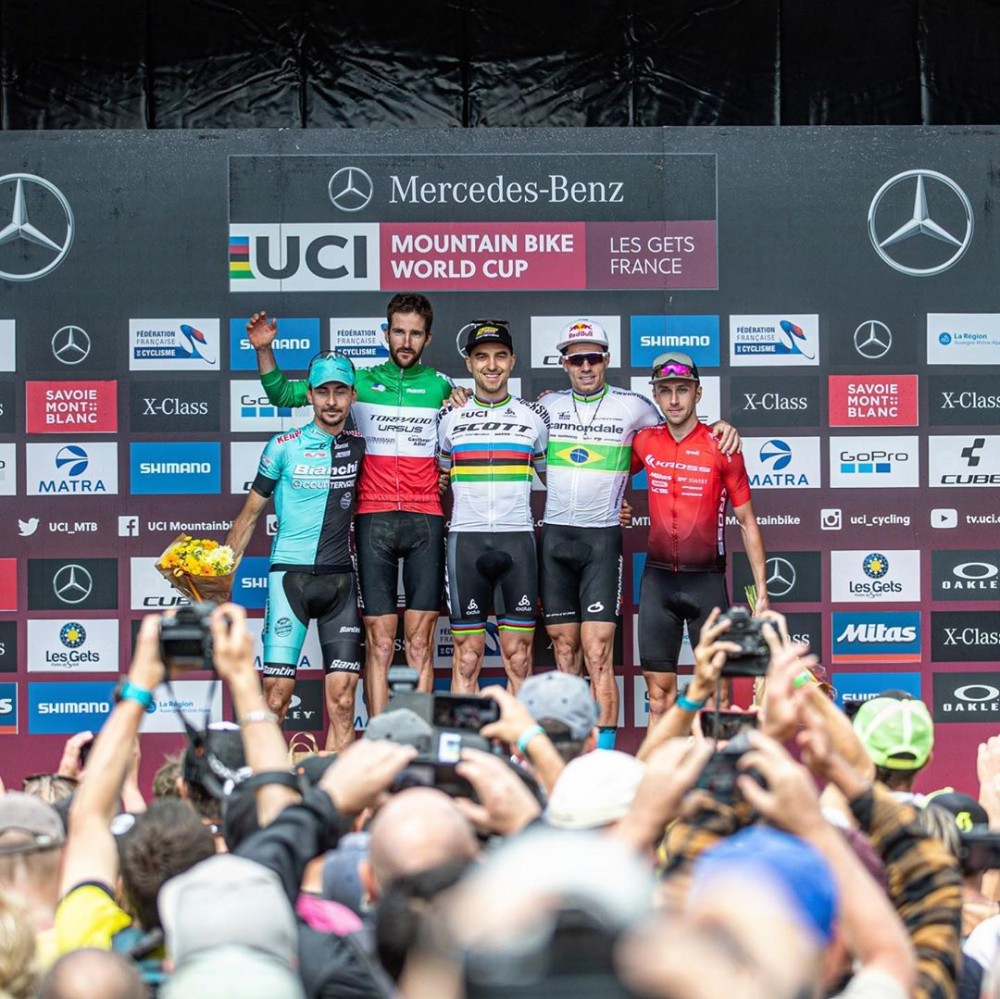 Mathieu Van der Poel did not have his day and could only enter in the 16th when he won the sprint position to Maxime Marotte. The best Spaniard was David Valero who finished in the 10th position.