The second half of the season began at the XCO World Cup in Vallnord with the absence of Mathieu Van der Poel. A World Cup that has kept the emotion until the last meters in which Nino Schurter has won suffering as we had not seen him before.

The Vallnord World cup started with Avancini in the first position after winning the Short Track last Friday. The French Champion Titouan Carod managed to become first at the beginning of the race, followed by Victor Koretzky, Nino Schurter and Henrique Avancini. 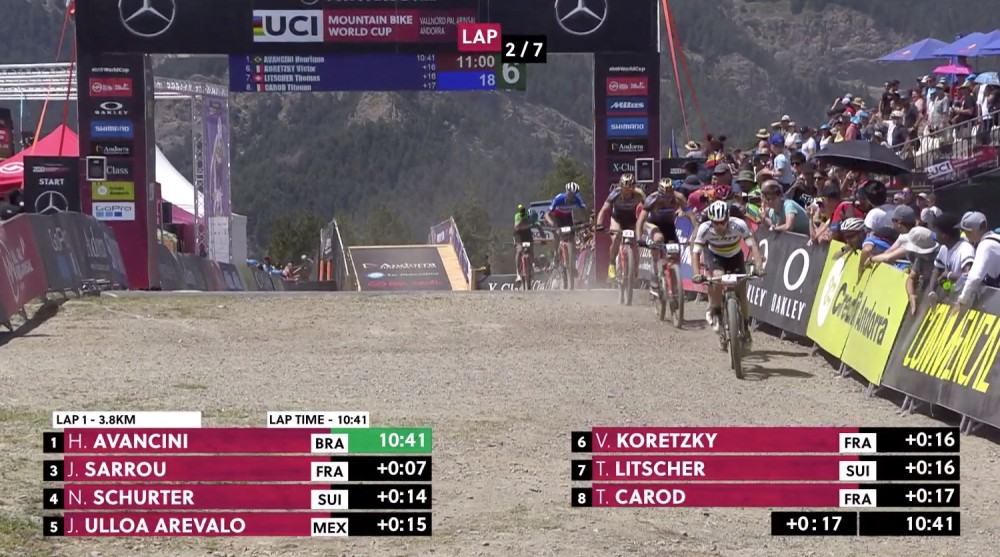 In the first meters of race Schurter suffered a fall in a downhill which forced him to stop a few seconds to straighten his handlebar. In turn, Avancini took a hard climb to launch a first attack and go solo. 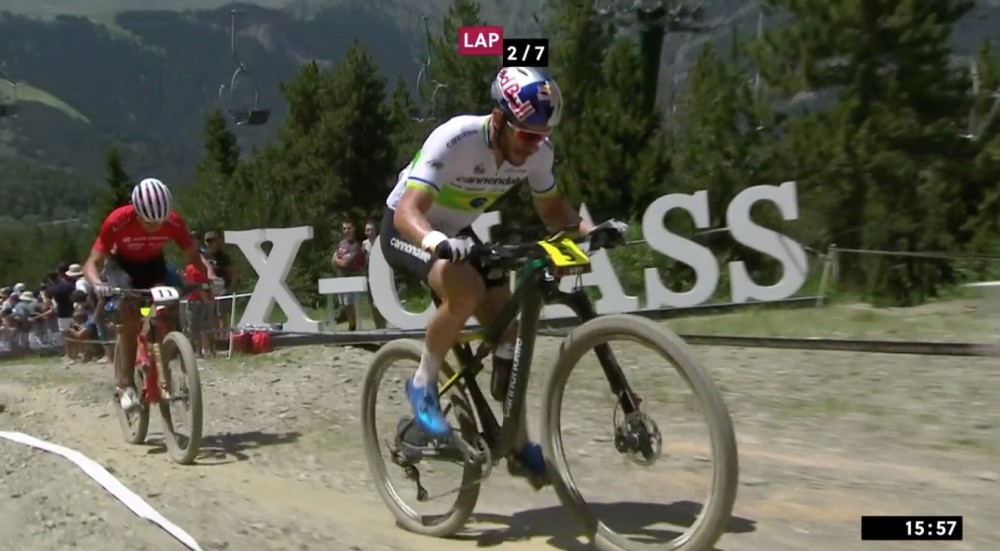 During the second lap the Czech Ondrej Cink reached Avancini and both increased the advantage with respect to Jordan Sarrou, third, and Nino Schurter, fourth. 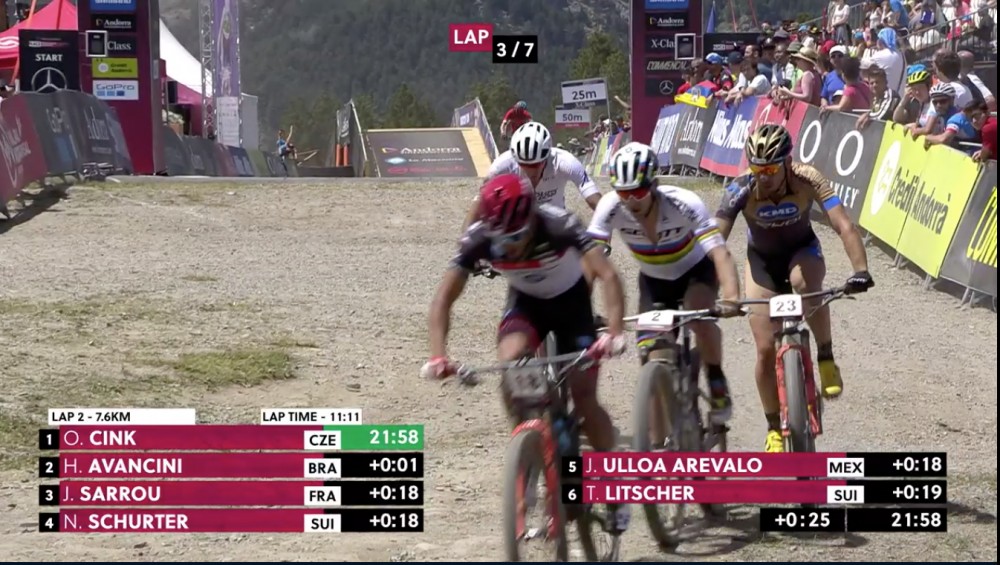 The Italian Gerhard Kerschbaumer, champion here in 2018, was one of the favorites to win but by the third lap he was eighth to almost half a minute behind the head of the race. 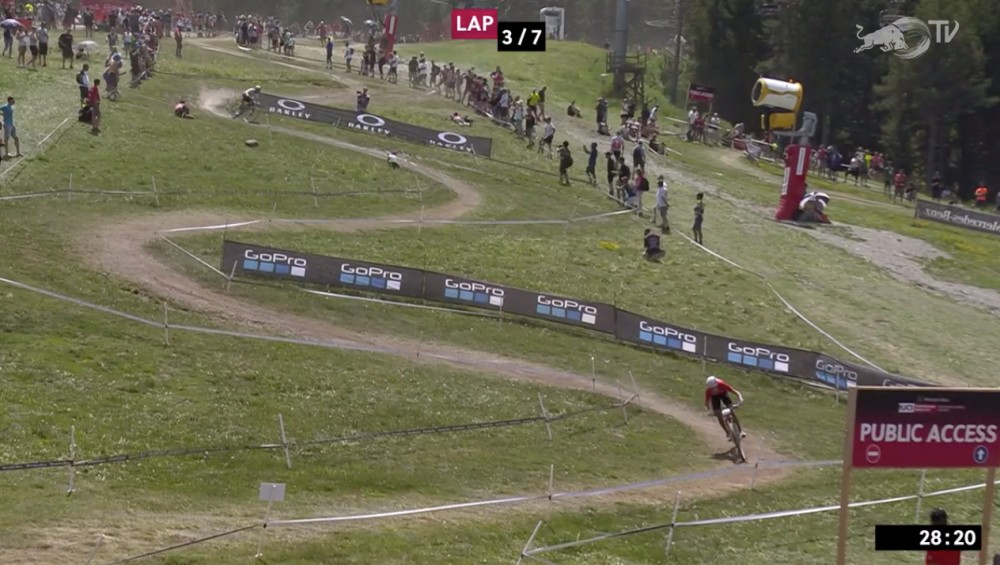 It was in the course of lap three, when Ondrej Cink took advantage of a climb in which he noticed that Avancini was having difficulties and accelerated the pace, leaving the Brazilian behind. Mathias Flueckiger managed to reach Schurter and both marched on the hunt for Avancini. Kerschbaumer was struggling to catch up with Shurter. 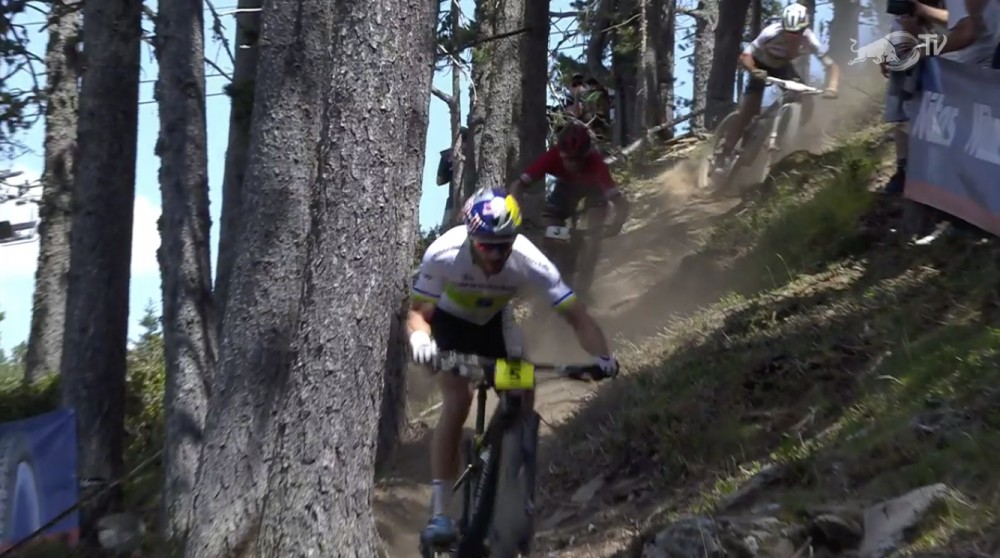 On lap 4, Ondrej Cink increased the pace when he was riding solo and behind him, a pursuit group was already formed with Avancini, Flueckiger, Schurter and Kerschbaumer. We could see how Nino Schurter suffered during one of the technical downhills, something rare in an area where Nino is a specialist. 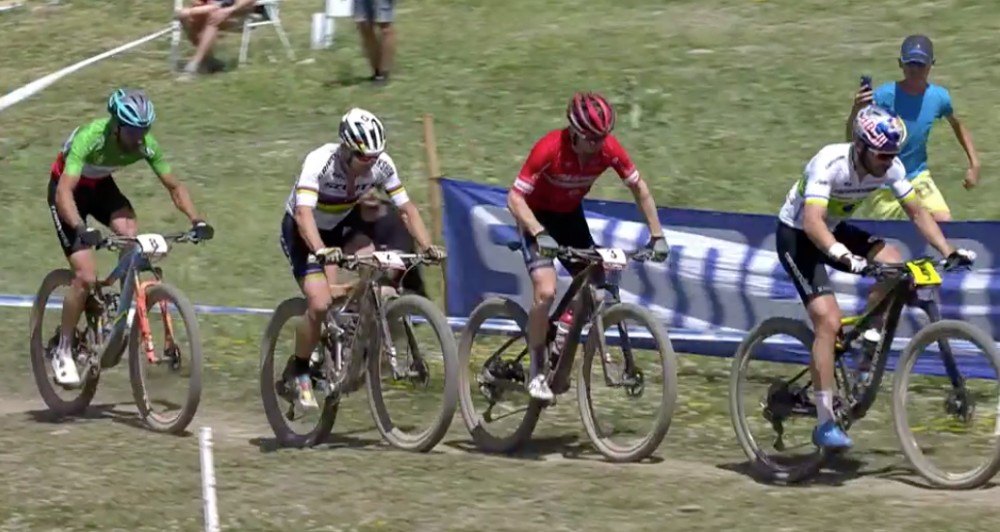 Despite the half-minute advantage that Ondrej Cink had, with three laps to go the race was totally open and anything could happen. 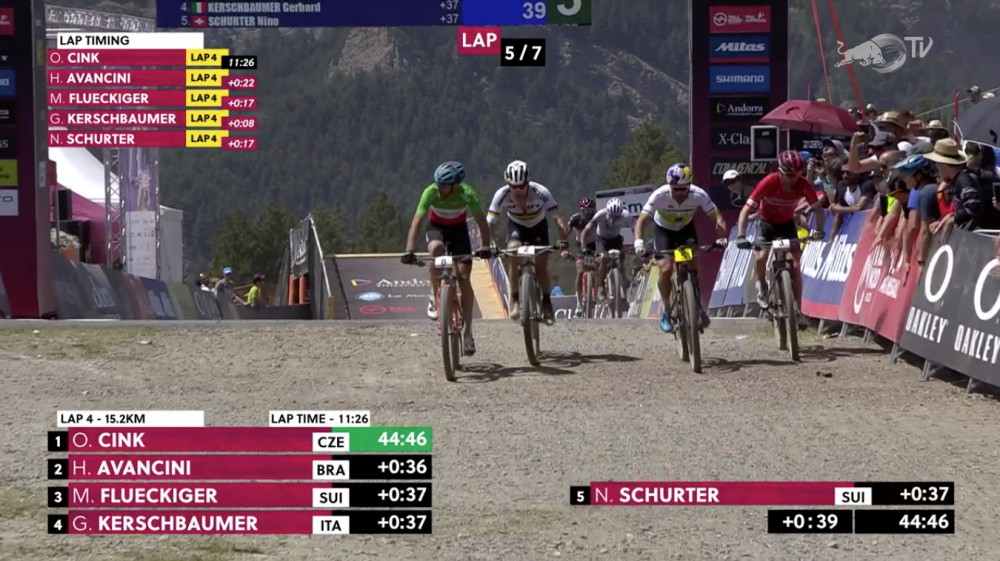 Before the end of lap 5 the Czech Ondrej Cink stopped at the refreshment area. It seems that he suffered an over effort complicated by the heat. With Cink out of the game, the race was divided into 2 groups: at the head Flueckiger, Avancini and Schurter; and the other group Gerardo Ulloa, Sarrou and Kerschbaumer. 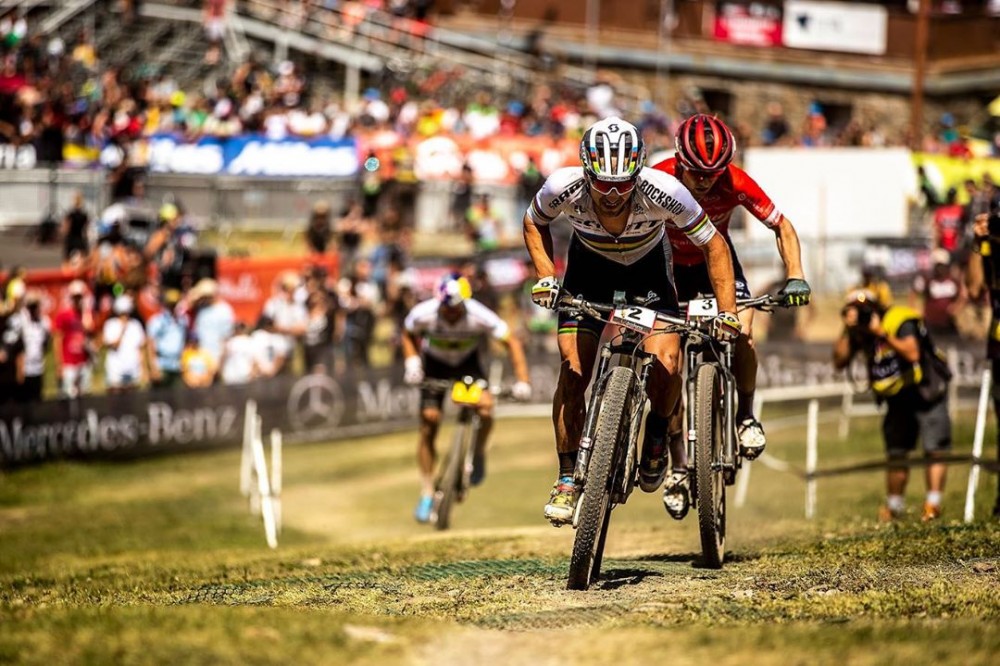 In the leading group began the attacks during the penultimate lap but none worked, and there were even uphill maneuvers that almost ended with one of the favorites on the ground. 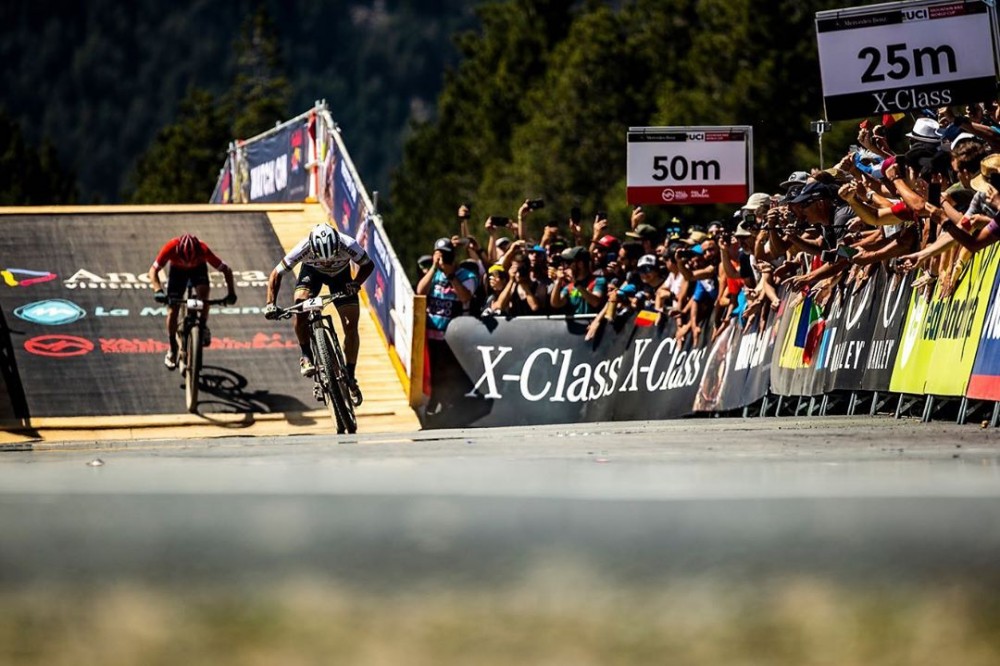 The last lap began with everything to decide and Nino Schurter attacked hard on the first climb. Flückiger managed to stick to his wheel but Avancini did get off the hook. In full escape, Mathias Flückiger gave a relief to Schurter and both managed to open a gap with the Brazilian.

Nino Schurter tried to surprise with another attack to Flückiger, but he held it well and won the downhill position. Both reached the last meters of the race together and Avancini was on their heels. 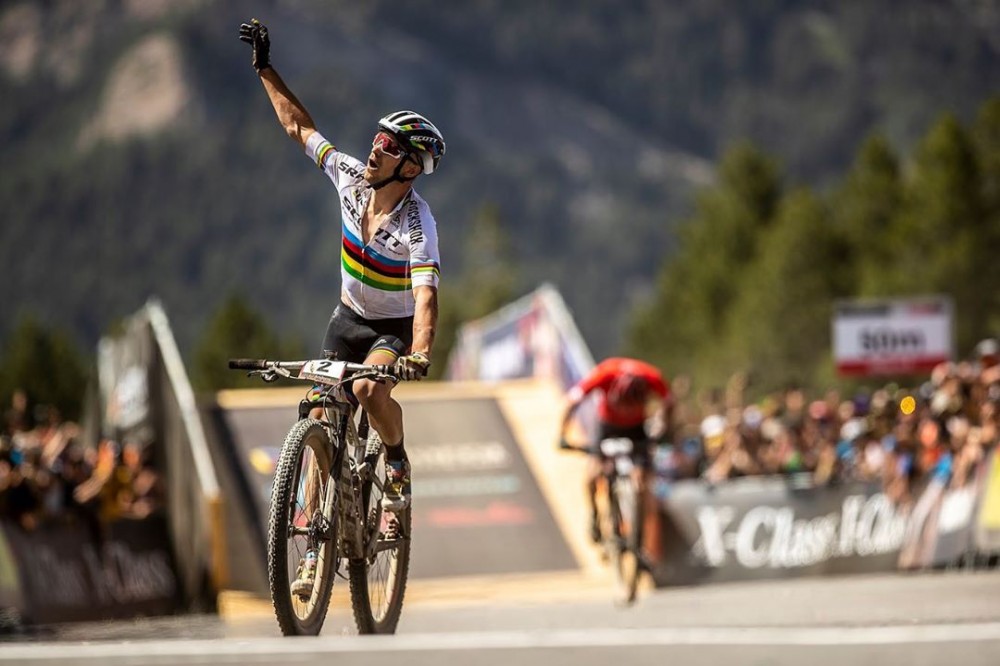 Before the finish line, Nino Schurter attacked and this time was the last. Nino Schurter won the Vallnord World Cup 2019, Mathias Fluckiger second and Avancini third. 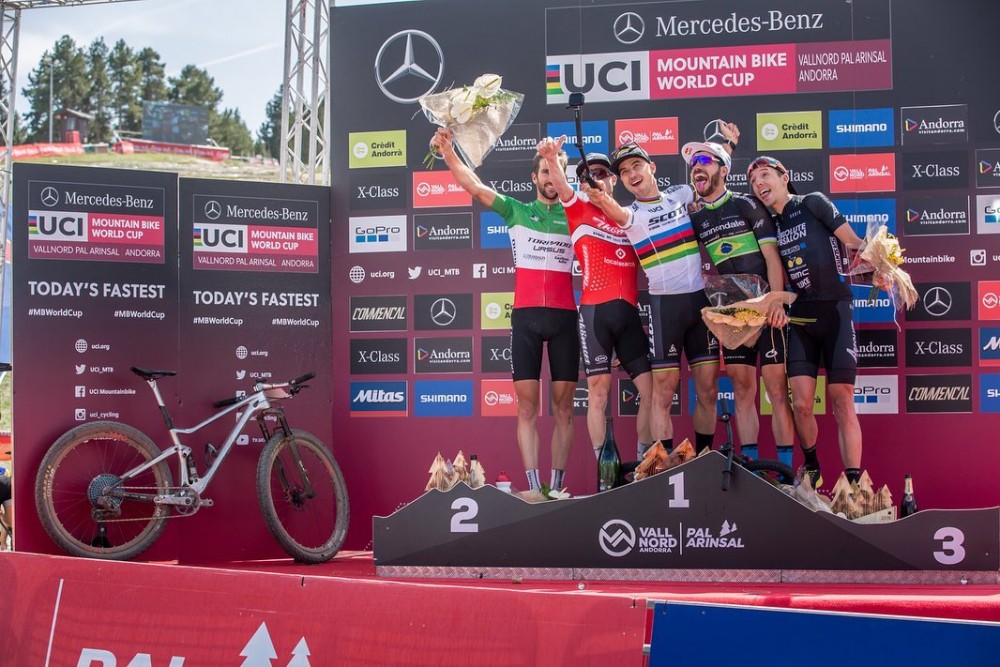 With this result, Nino Schurter takes the lead position of the World Cup followed by Mathias Flueckiher and Mathieu Van der Poel. The best Spanish was again David Valero in position 15. 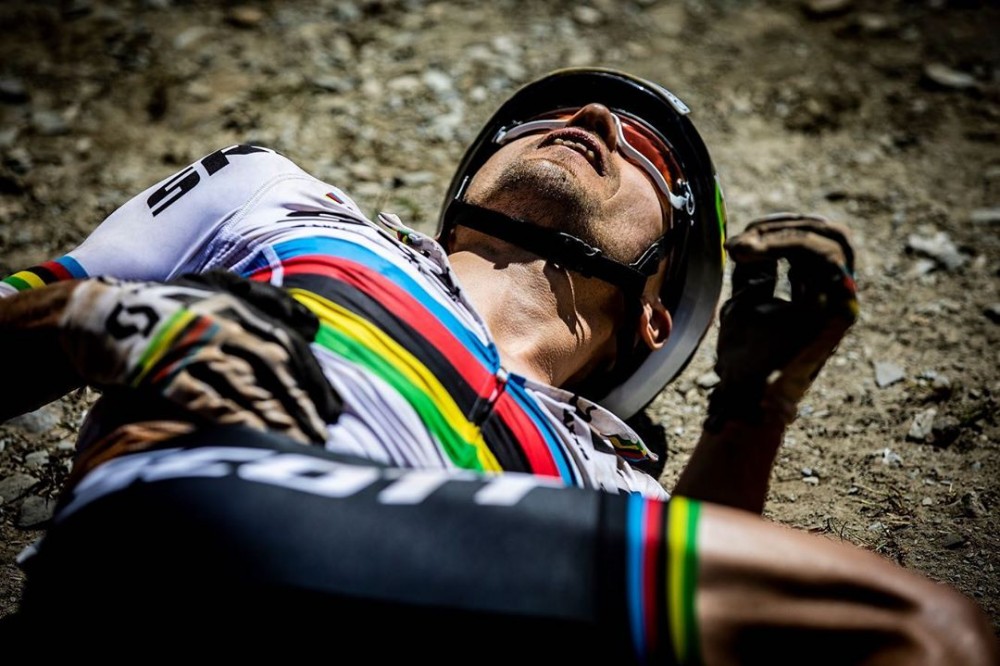