For the second day of the Costa Blanca Bike Race 2020 one of the most emblematic stages of the race was reserved, the time trial to the Sierra Gelada antennas. A 17 km route that hides a final section of 2.5 km with ramps that exceed 30%. 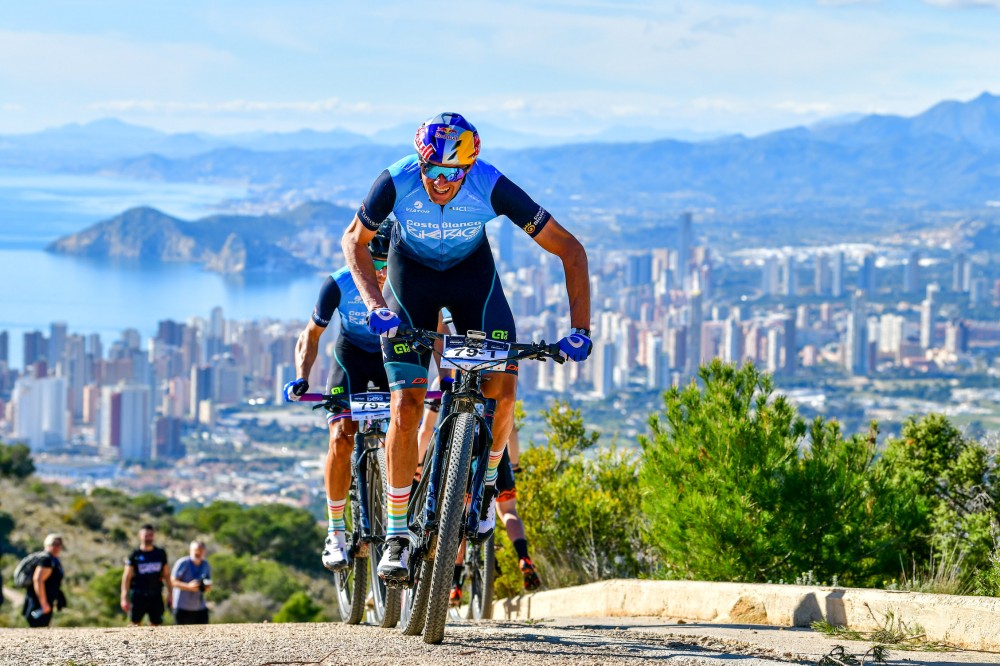 Tiago Ferreira and Hans Becking in men, and Bec McConnell and Githa Michiels in women, took the start today with the race leader's jersey after their victory in the opening stage. They defended the jersey and were once again the fastest pairs of the day in one of the most decisive stages in terms of sport and the most exciting for the fans. This year the number of fans who crowded and cheered on the final ramp was far higher than in previous years.

From the Altea sports centre, the start was made on a stage that was already classic but which was to open a new section to the church of Mare de Déu del Consol, where the time of the time trial was to be measured. From there, the cyclists rode through part of the town's historic centre before heading for the final kilometres where most of the 700 metres of difference in altitude of the stage was accumulated.

In the men's category, Tiago Ferreira and Hans Becking, from the DMT Racing Team, set the best time of the stage again, completing the course in 00:36:48. The Primaflor Mondraker X-Sauce couple formed by Anton Sintsov and Dan McConnell were second when they stopped the chronometer in 00:37:28 and the podium was closed by the Norwegian couple of Emil Hasund and Anders Johannessen with the same time as the seconds.

The Buff Scott couple formed by Francesc Guerra and Jose Maria Sanchez suffered a bad day when Sanchez got a flat tire a few meters from the start which left them without any option for the rest of the stage and has made things very difficult for the general.

In the men's general classification, Tiago Ferreira and Hans Becking consolidate their lead and manage to increase the advantage with their competitors with two stages to go before the end of this Costa Blanca Bike Race 2020.

In the women's category, the Primaflor Mondraker X-Sauce couple formed by Bec McConnell and Githa Michielsss continue to dominate the category with authority and have once again been the fastest in the stage with a final time of 00:45:42. Rocío del Alba García and Lejla Tanovic, from BH Templo Cafés UCC, were second with a time of 00:47:46. The podium was closed by Greete Steinburg and Janika Loiv from the Estonian national team with 00:51:14.

In the overall women's classification McConnell and Michiels are still leaders and have managed to increase their advantage with two final stages left which, a priori, are in their favour.