We tested the Lefty Ocho: the best fork at the moment

Since it was founded, Cannondale has been known for following its own path, trying not to be influenced by the trends, and by being unique it has managed to stand out by developing bikes and components that are already part of the history of this sport. After testing the new fork for a few weeks, we can say that the Lefty Ocho fork is without a doubt one of the great milestones of the brand and probably the best XC and XCM fork of the moment. 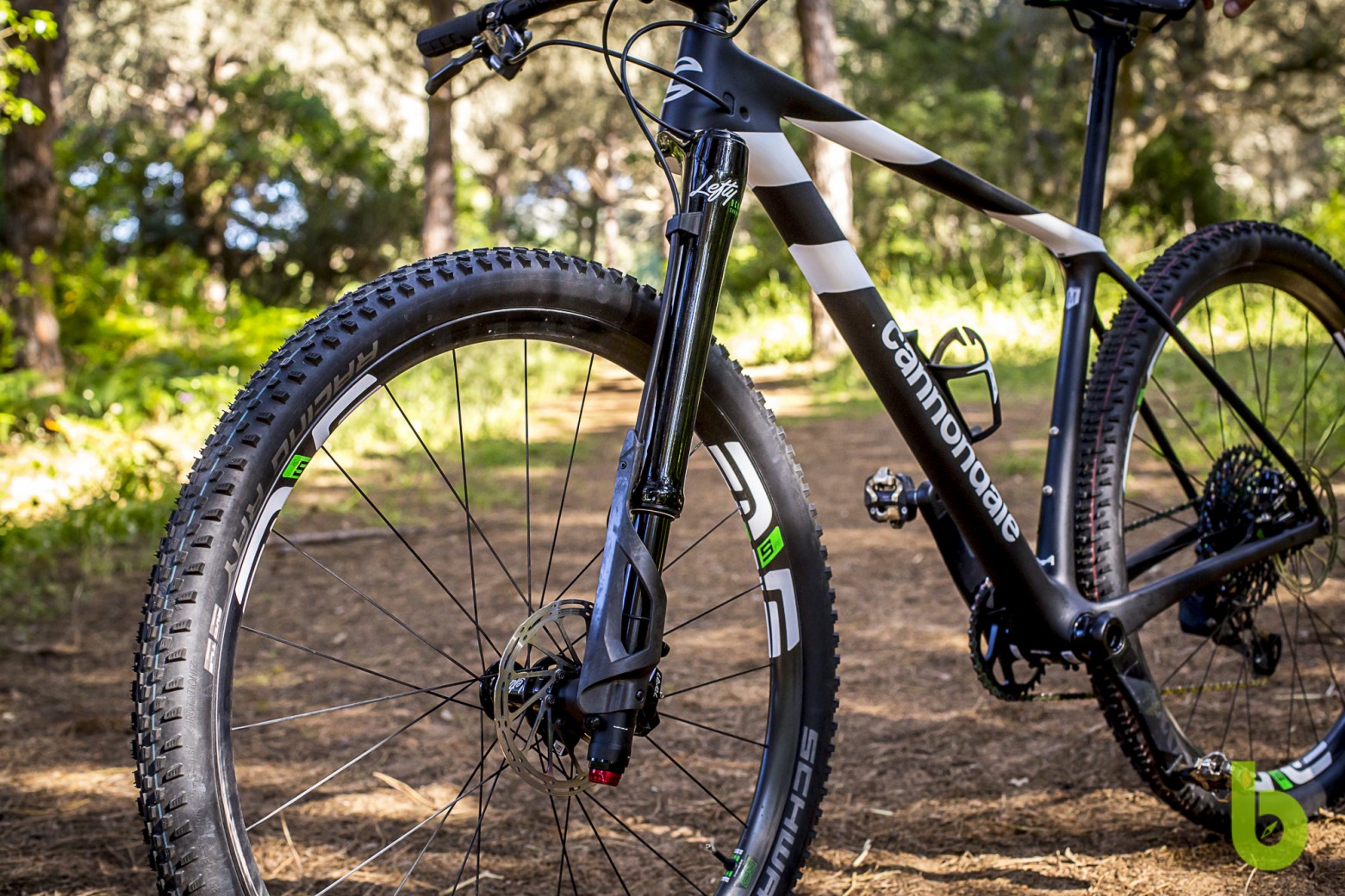 The name Ocho for this fork is no coincidence, as it is the eighth version of a fork that has undergone many advances to become the first single-sided, single-crown fork in the world. 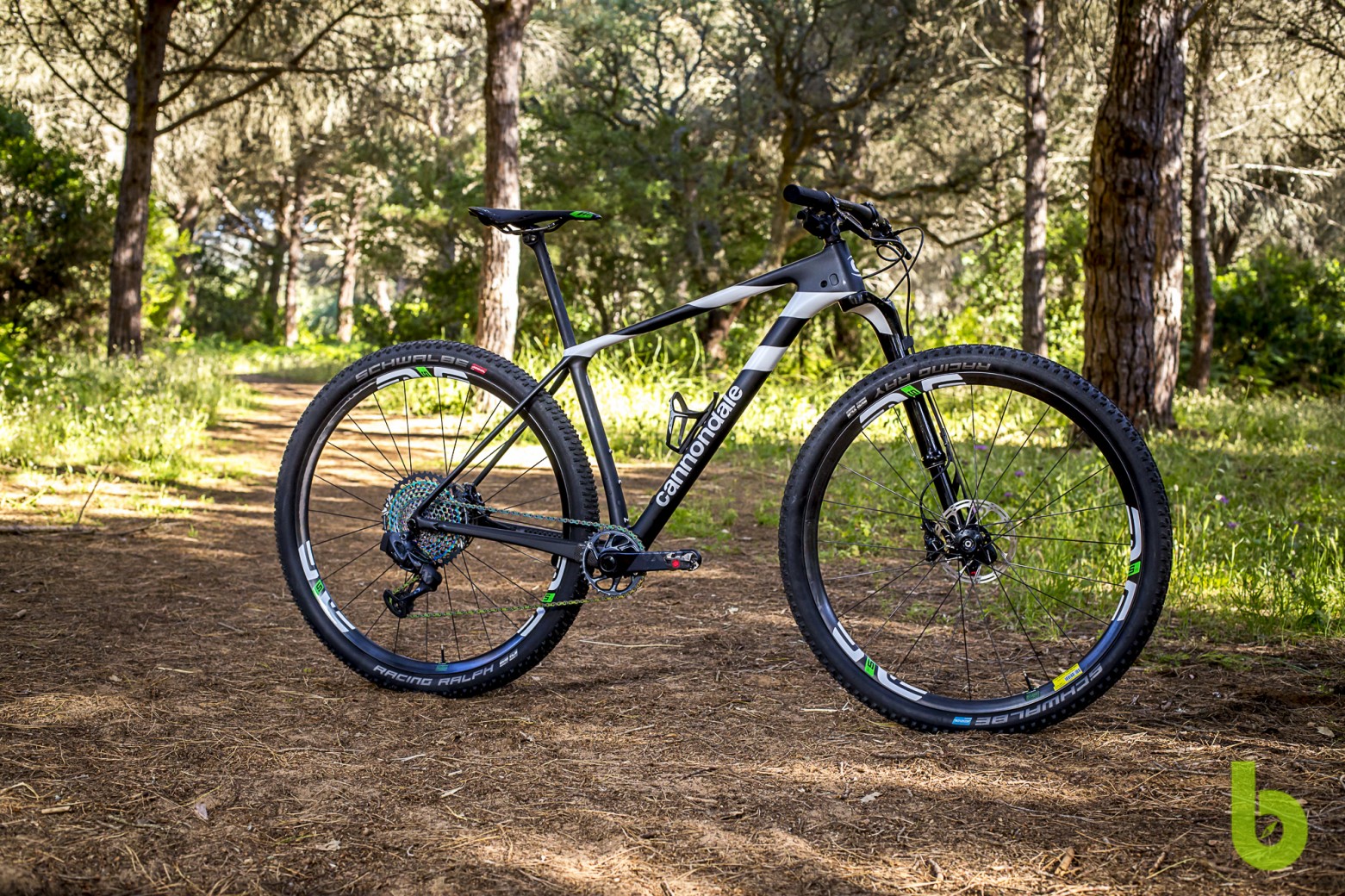 By the 1990s, Cannondale had already stand out from the market by installing the suspension in the down tube just below the headset in its forks. Meanwhile, other brands were making two-legged suspension forks that imitated those used on motorcycles. From this period are the legendary Cannondale Fatty or P Bone.

That system was left behind as it was unable to offer travel lengths more than 80 mm. That's when the DH and Freeride 120mm forks arrived. But this is where we find the origin and soul of the future Lefty, the needle bearing system.

When all other suspensions relied on a low-friction system to contract and expand the fork, Cannondale developed a system of four flat sections surrounding the bar, with needle-bearing strips sliding down the bar with much less friction than their competitors.

By introducing the octagonal section of the bars into the circular section of the forkleg, it made its two-legged forks extraordinarily stiff. So much that Cannondale's engineers tried cutting the right arm and were surprised to see that the fork was still functional, offering extreme rigidity at half the weight - the Cannondale Lefty had just been born. 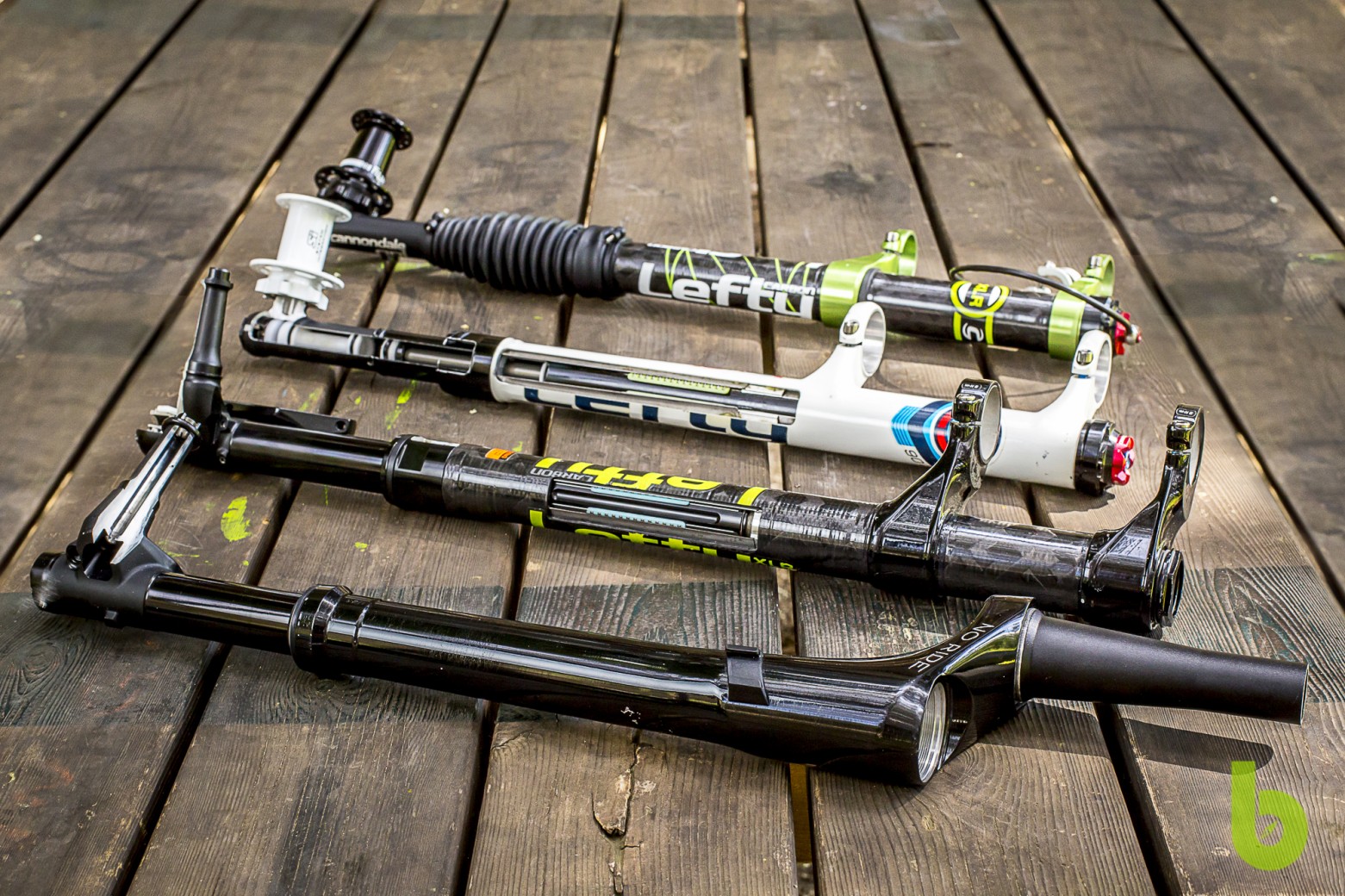 1999 saw the release of the first version of the Cannondale Lefty, a very lightweight, exceptionally stiff, 100mm single-arm fork with a groundbreaking design. Since then the Lefty has evolved by using different materials such as titanium or carbon, becoming more precise or improving its locking system. But in 2018 came the eighth version of the Lefty and with it everything changed again.

Cannondale doesn't consider the Lefty Ocho as an evolution of the fork but as a revolution. This is the first single-sided, single-crown fork in mountain biking, and it has been achieved without sacrificing stiffness or weight. How did they do it? Let's see all its secrets in detail. 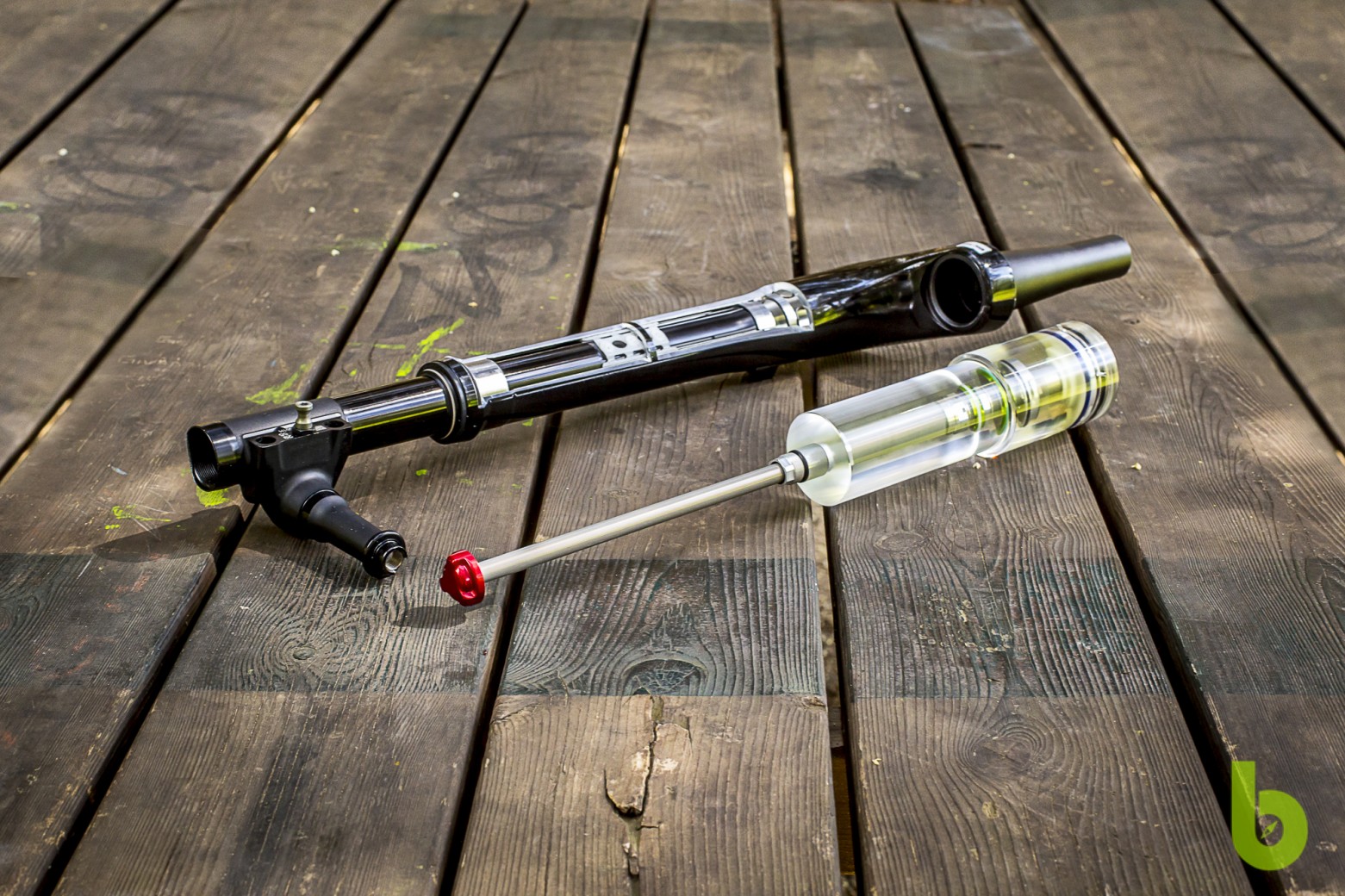 Key Points of the Lefty Ocho

As we have already said, the main change that brings the Lefty Ocho is its redesign. As far as aesthetics are concerned, we can say that this fork has gained a lot, but obviously this decision does not only take into account aesthetic reasons and conceals many important advances, such as its carbon construction or a completely renovated interior. 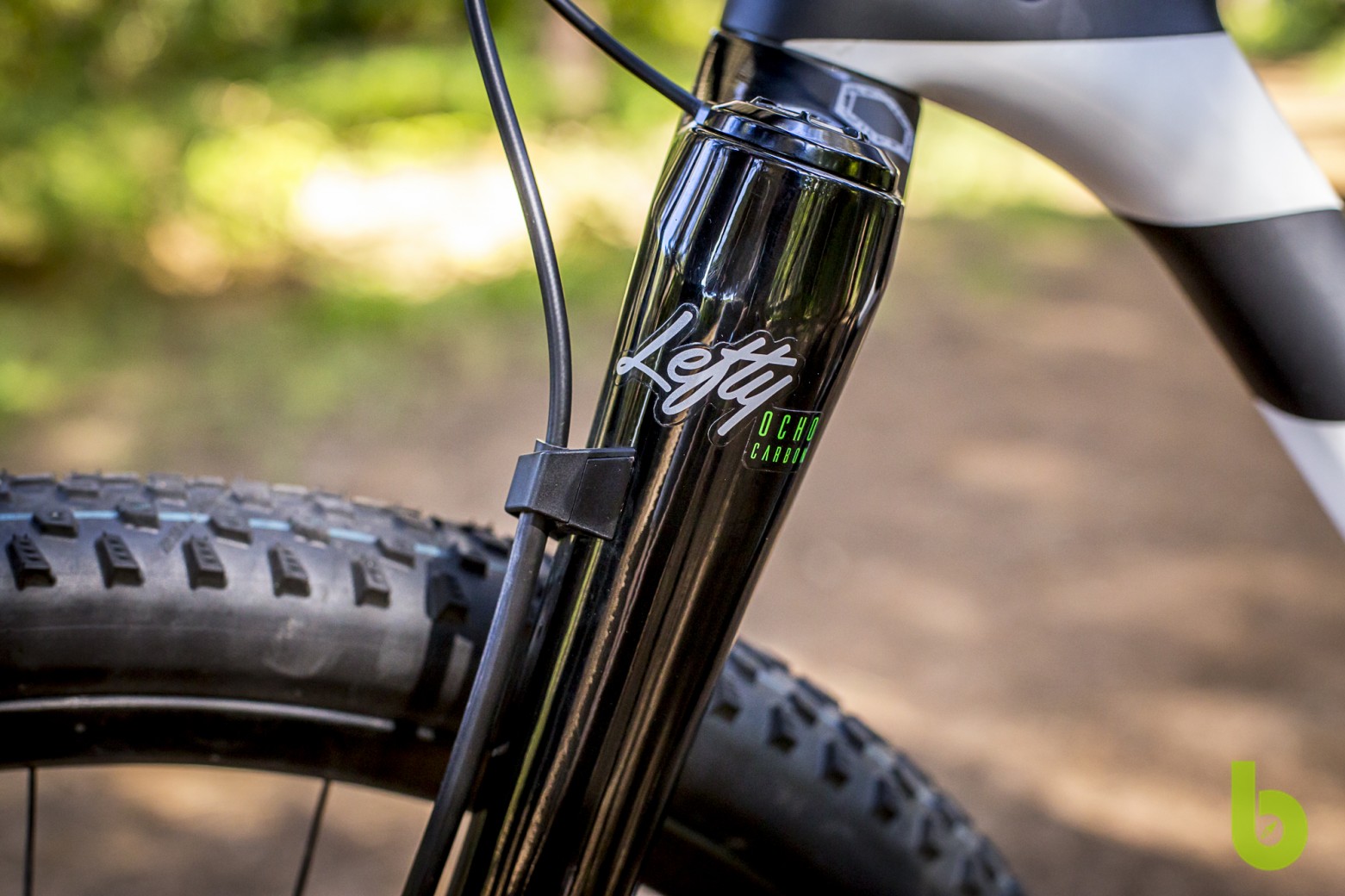 Regarding specifications, we are talking about an inverted single-sided, single-crown fork with a 100mm of travel and now with conical head tube, a long-awaited innovation. The Lefty Ocho is available in Carbon or Aluminum for 29" or 27.5" wheels and the offset is 55mm and 50mm respectively.

We had the opportunity to test the carbon version for 29" wheels and although the declared weight is 1446 g, it is actually about 1510 g with the lockout attached and ready to ride. Now, what has changed for the Lefty Ocho to have such a good reputation among all those who test it?

For the Ocho, Cannondale has created a new bearing system called the Delta that turns friction between the cartridge and fork leg into pure smoothness. Where as in previous versions of the Lefty there were 4 needle bearing tracks around the forkleg, they are now 3 and made in one piece that embraces the bar, reducing weight and further reducing friction. The smoothness offered by this system is far above the usual ones that rely on lubricants, seals or coatings. 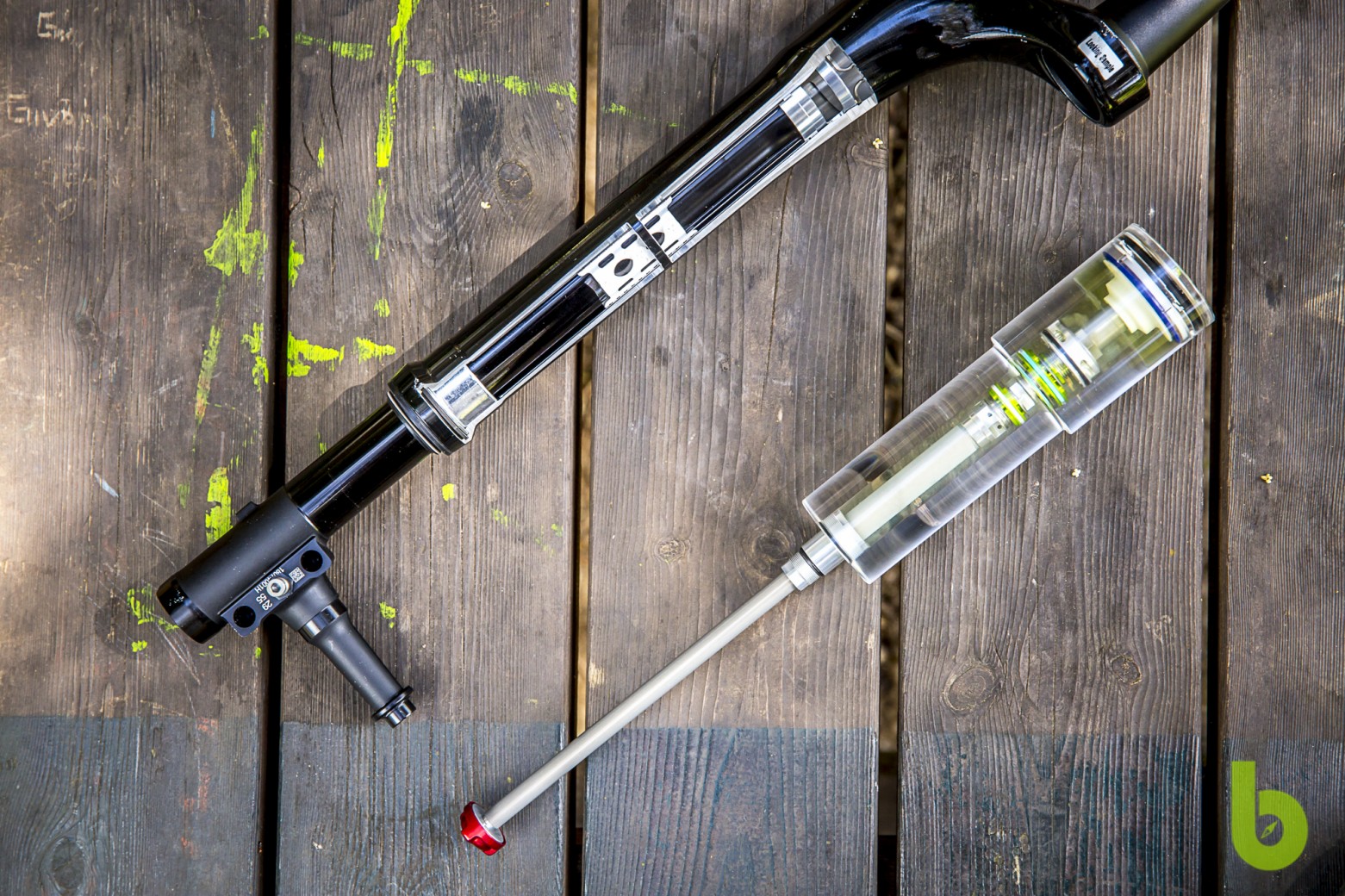 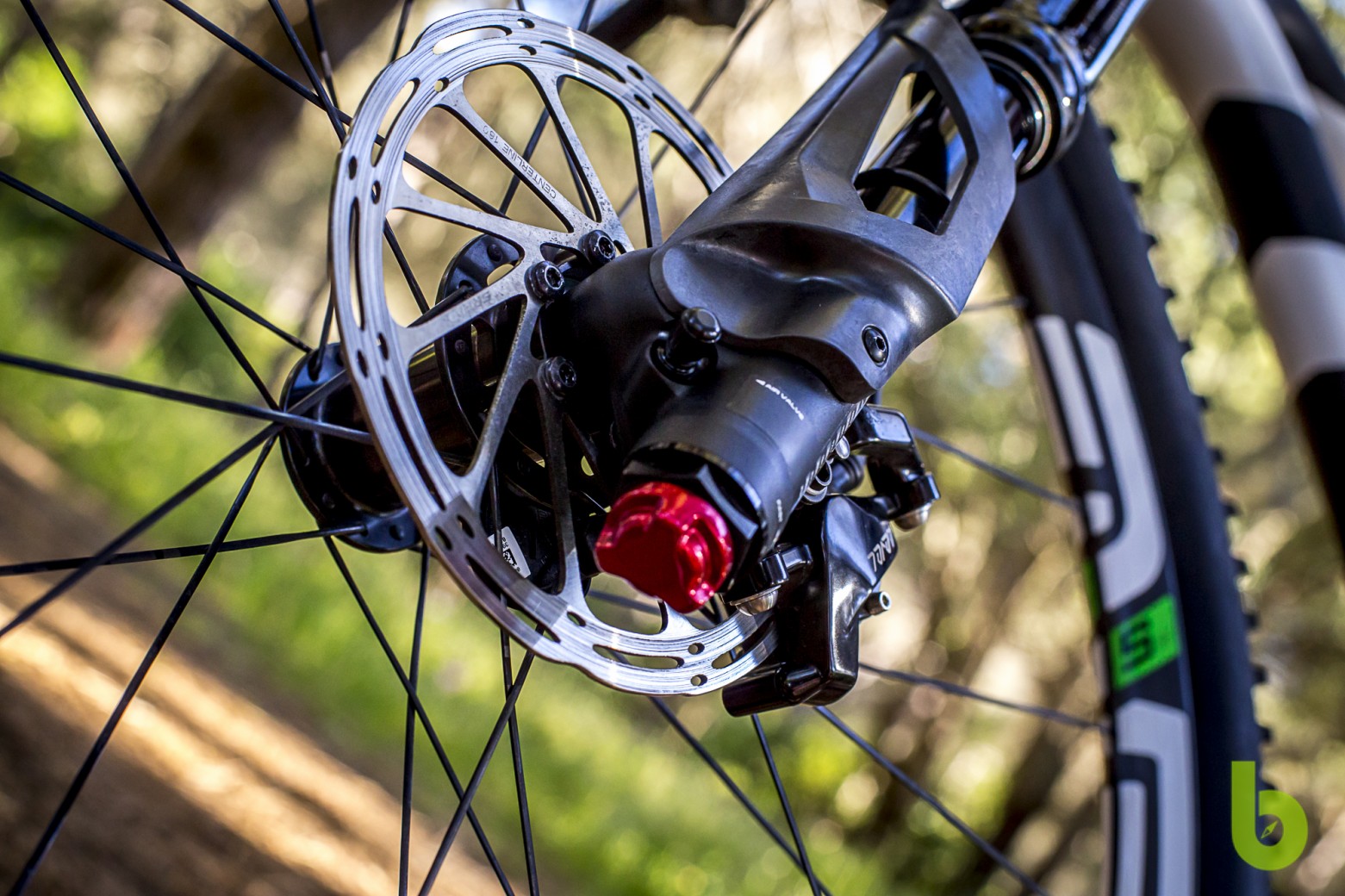 On the outside, the quick release system of the brake caliper stands out. With only half a turn of its 5 mm allen screw, we have the caliper off the bike and we can change the wheel out quickly. Although let's remember that with the Lefty it is not necessary to remove the wheel to fix punctures or put an inner tube as it can be done from the right side of the wheel.

Other quality external details can be found in the carbon protection that covers the visible part of the cartridge. 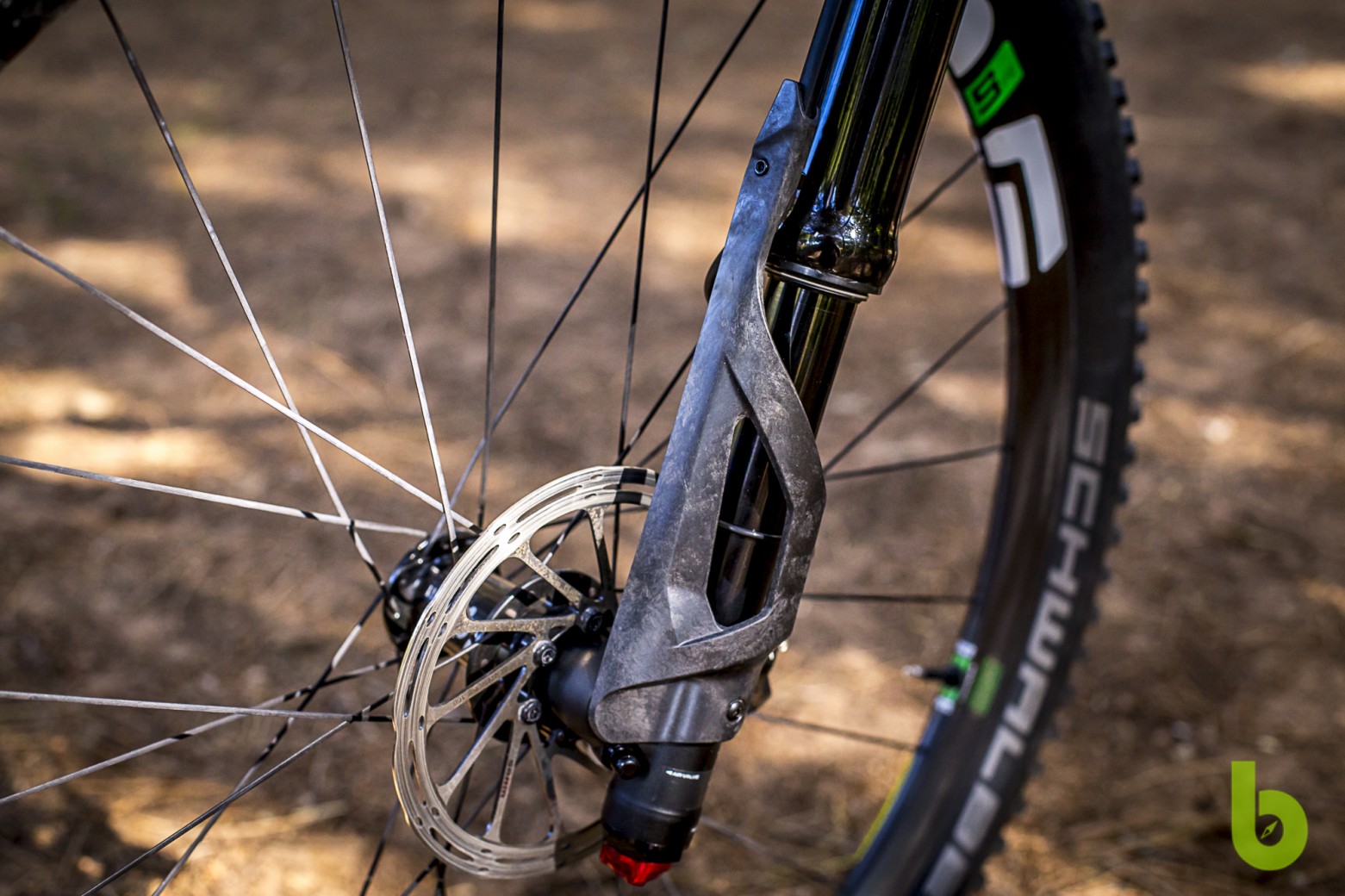 Riding with the Lefty Ocho: it's hard to say goodbye

We already knew the theory and it was time to test it thoroughly. The first impression is that the Lefty still looks robust and elegant.The joint between its single arm and the crown is made in one piece and gives no sense of weakness. On the contrary, the set looks very sophisticated due to its unique and original character. But although this is an important issue, it is only aesthetic. 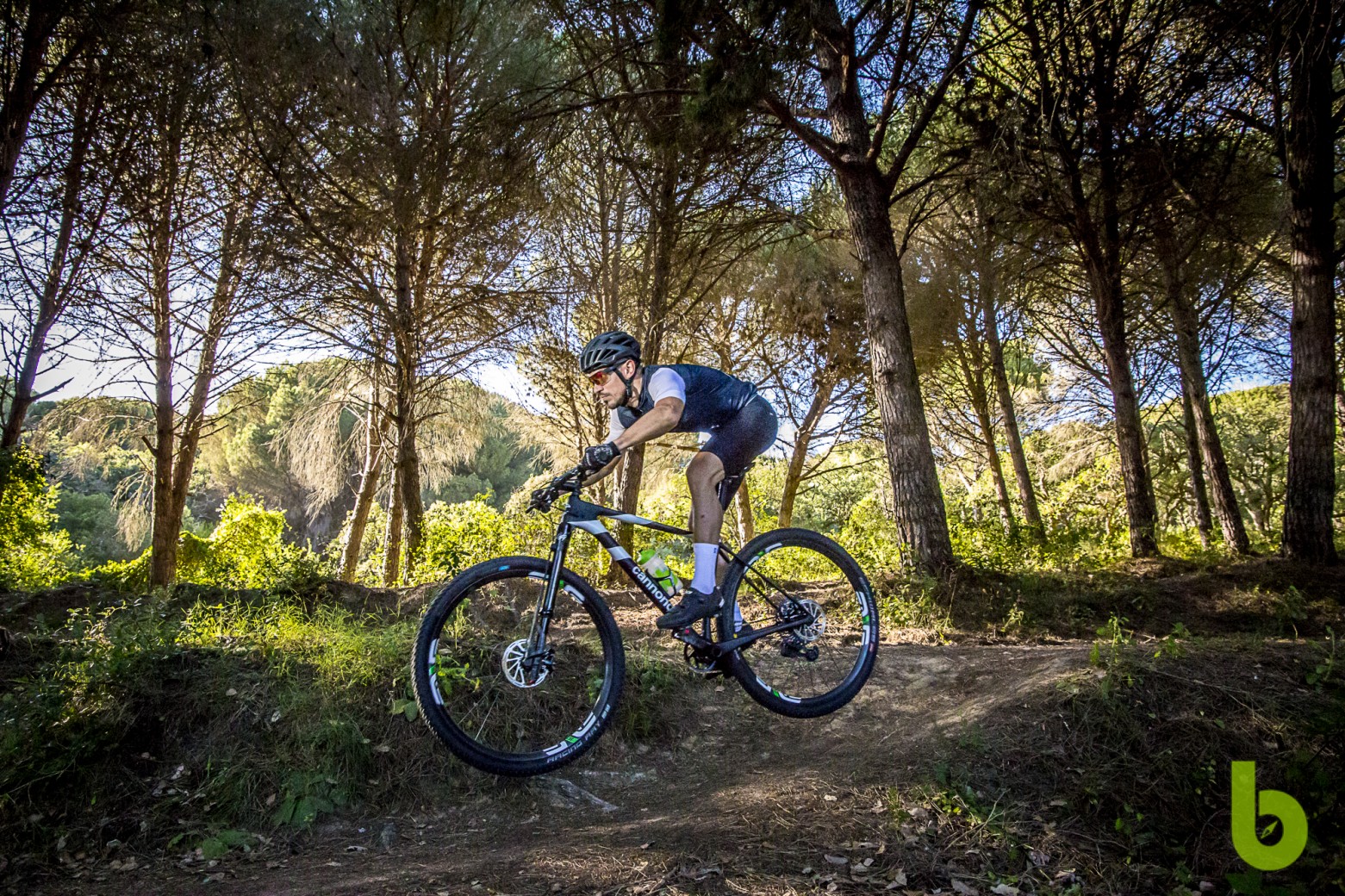 We tested the fork with the Cannondale F-Si Carbon and just before getting on it we were able to adjust the pressure and rebound thanks to the guide on the bottom. The setting is simple and precise thanks to the dials, but we couldn't wait to pedal and there were two things we wanted to check: the rigidity and smoothness of the Lefty Ocho. In both, it stands out from the first pedal stroke. 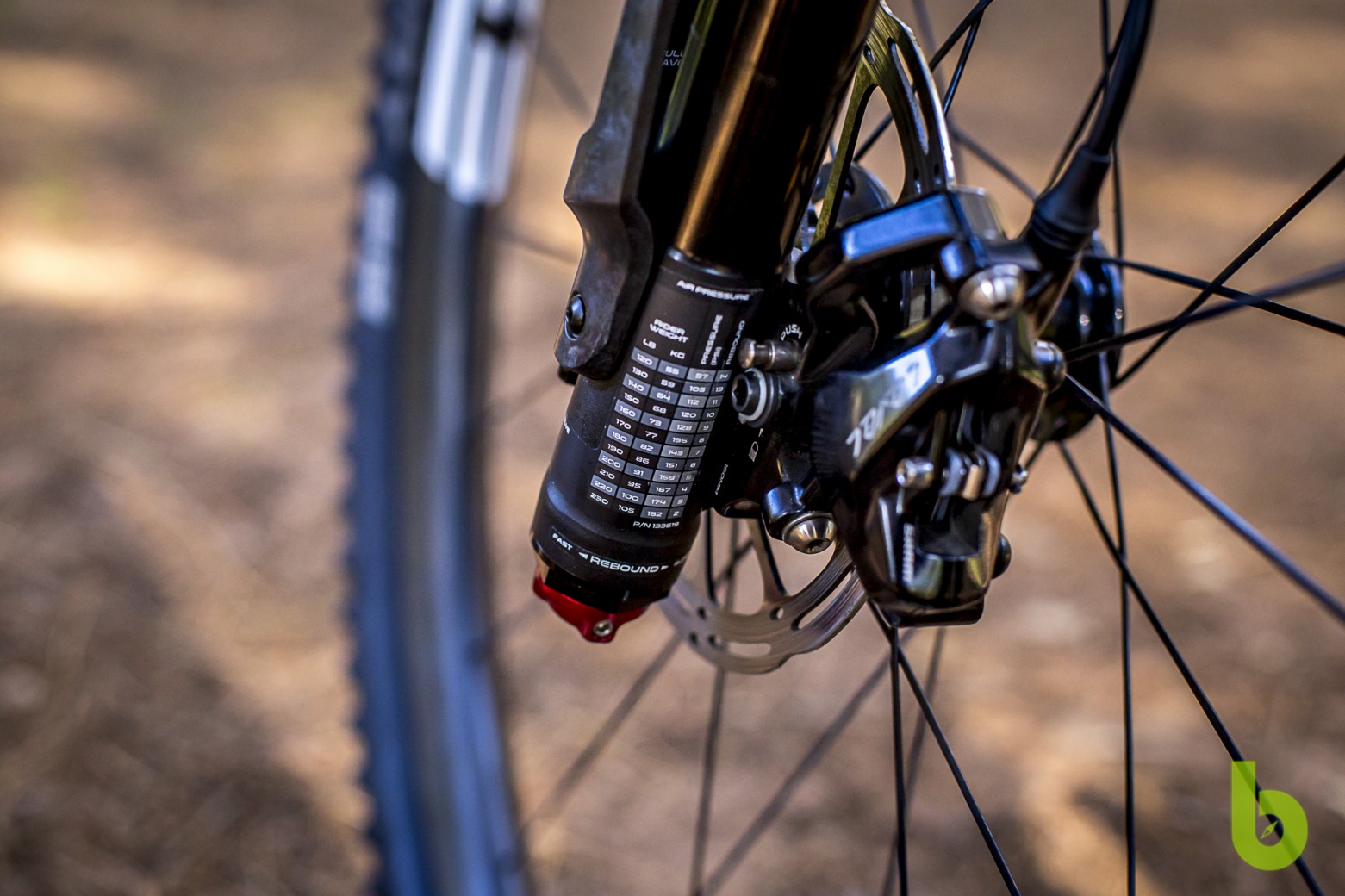 If we had doubts about whether the Lefty Ocho is less rigid, they disappeared within a few miles. It's still very stiff even with the new semi-triangular section of the cartridge that houses the three lines of bearings. In addition, Cannondale claims that with this triangular arrangement the bar is always centered. 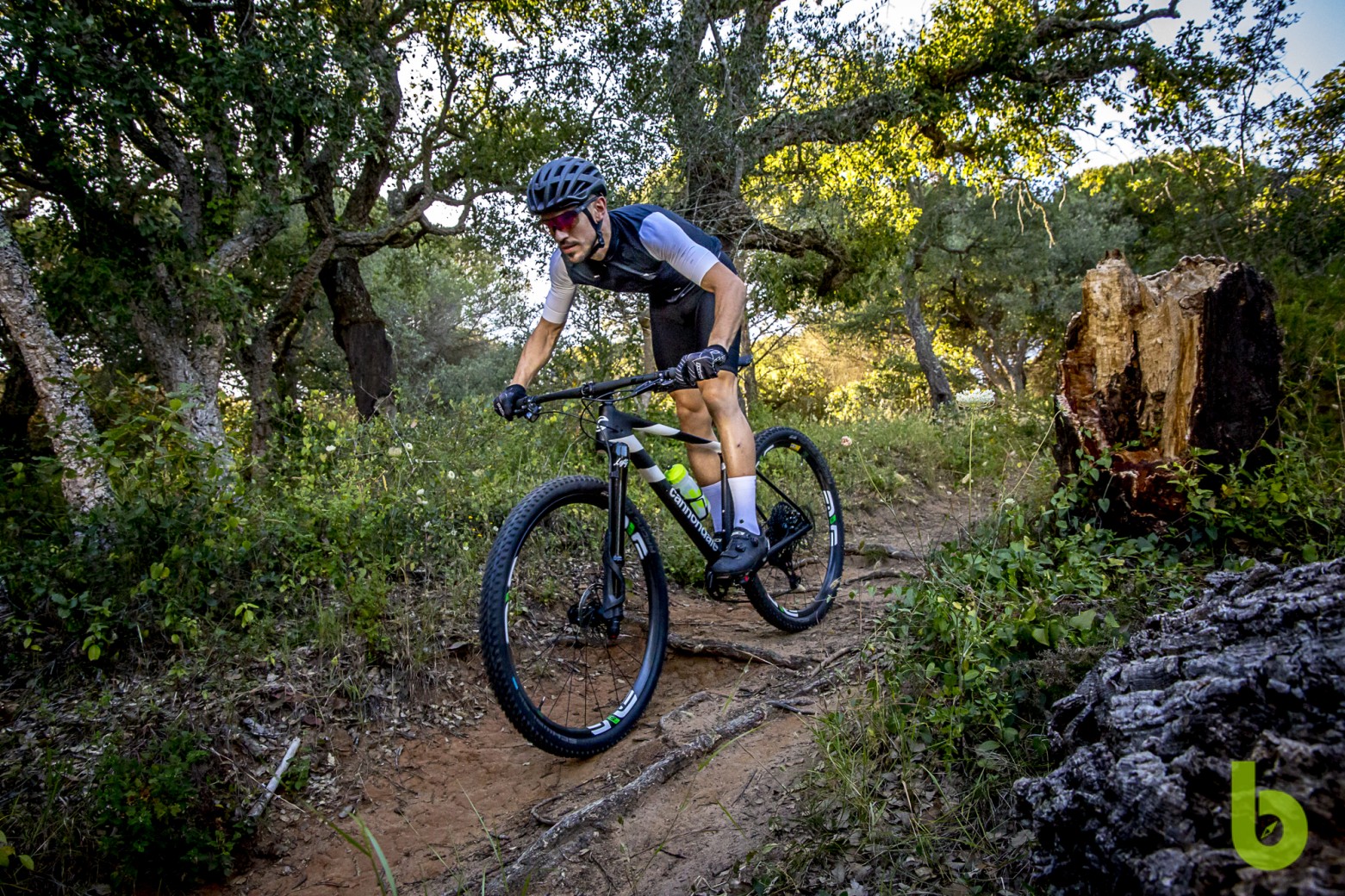 But if we had to highlight one aspect of the Lefty Ocho, it's its smoothness. The feel of this fork is outstanding and can be felt very directly on any track, although where it stands out most is in trails with continuous bumps. There the fork flows like no other thanks to its needle bearing system that allows it to recover faster and smoother than any other fork in its range. Its main competitors, the RockShox SID WC and the Fox 32 Step Cast, also have an excellent performance but the sensations given by the Lefty Ocho are incomparable. The fork works smoothly and relaxed even on long and demanding rocky sections. 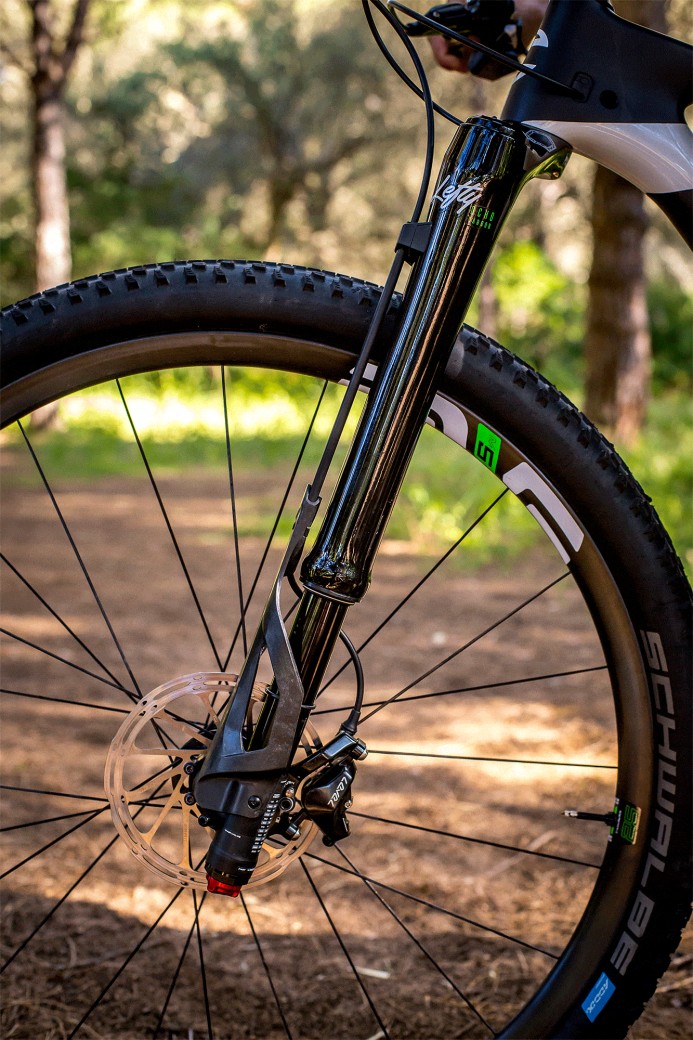 We haven't said it yet, but the Lefty Ocho is a pure XC fork that has been developed with competition in mind, but we can tell you that the 100mm of the Ocho is more impressive than other models thanks to its performance in difficult sections. 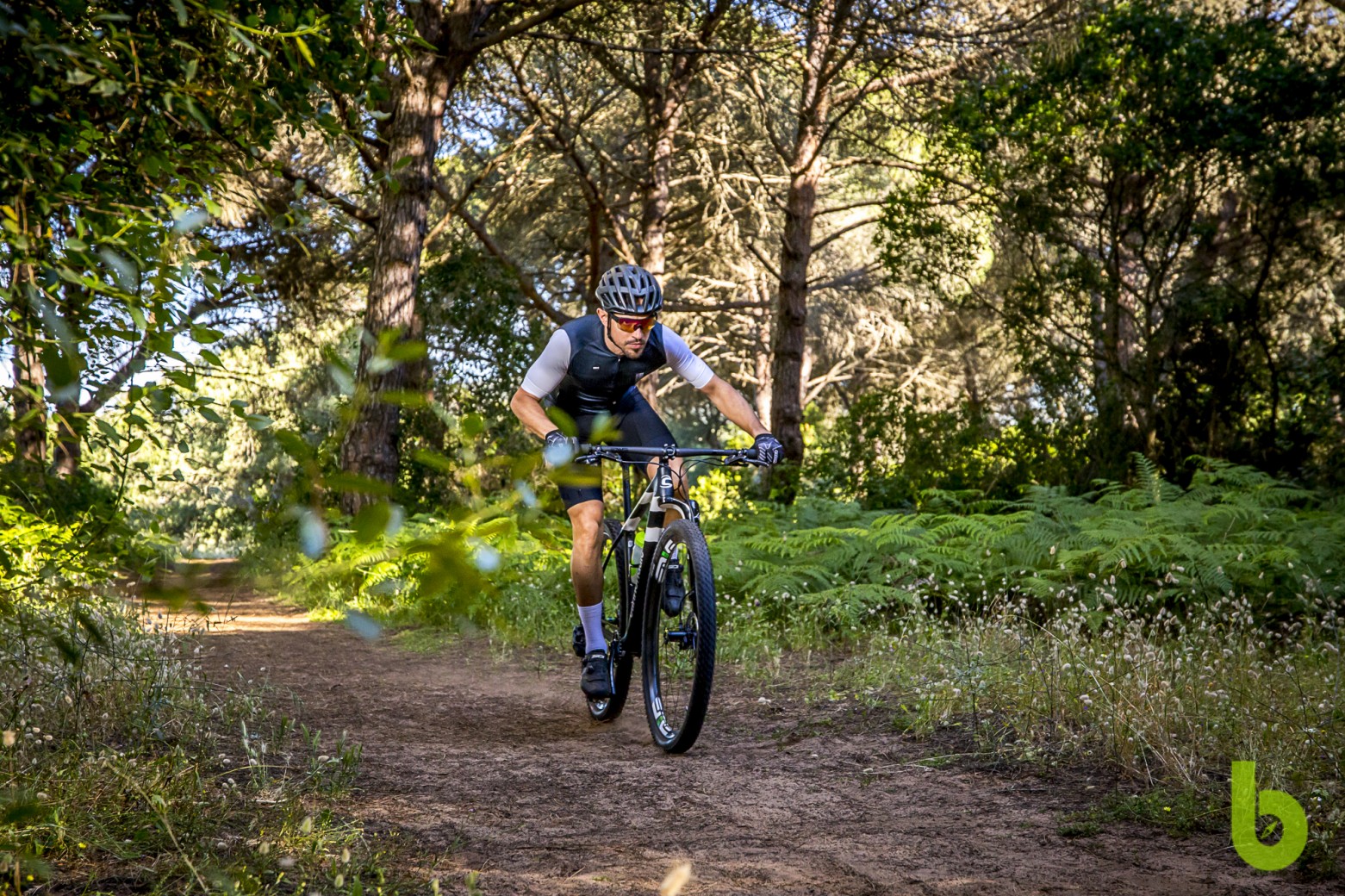 Besides the settings already mentioned, the Lefty Ocho only has two positions in operation: open or locked. With the lockout activated the fork works as expected but the truth is that if you set it right you won't need to lock it in the mountain. We only lock on asphalt uphill sections. The remote control is a Fox brand and during the test it worked perfectly.

After spending a few days with the Lefty Ocho, we understood why it had been impossible to find anyone to speak bad about it after testing it. It is difficult to find any weakness beyond the fact that the Cannondale hub is not compatible with all wheels. In lightness it doesn't have much competition but in stiffness, performance and feeling we can say that it is the best XC fork at the moment.

As a conclusion we can say that this fork is capable of raise the level of any mountain bike in which it is installed, whether Cannondale or not.