The SRAM GX Eagle arrived a few years ago as an entry-level group for those looking to move up to 12 speeds within the single chainring without spending too much money. Over time, SRAM has included other lower-featured 1x12 groups that have placed the GX in the middle of the SRAM Eagle segment above the SX and NX. The latest update takes the GX Eagle 520% to a much higher level.

The launch of a new set: derailleur, crankset, cassette and chain improves on the current GX and brings it much closer to its big brothers (X01, XX1 and AXS). Let's see in detail all the new features it includes, and then we'll tell you our experience after 300 kms with the new SRAM GX Eagle 520%. 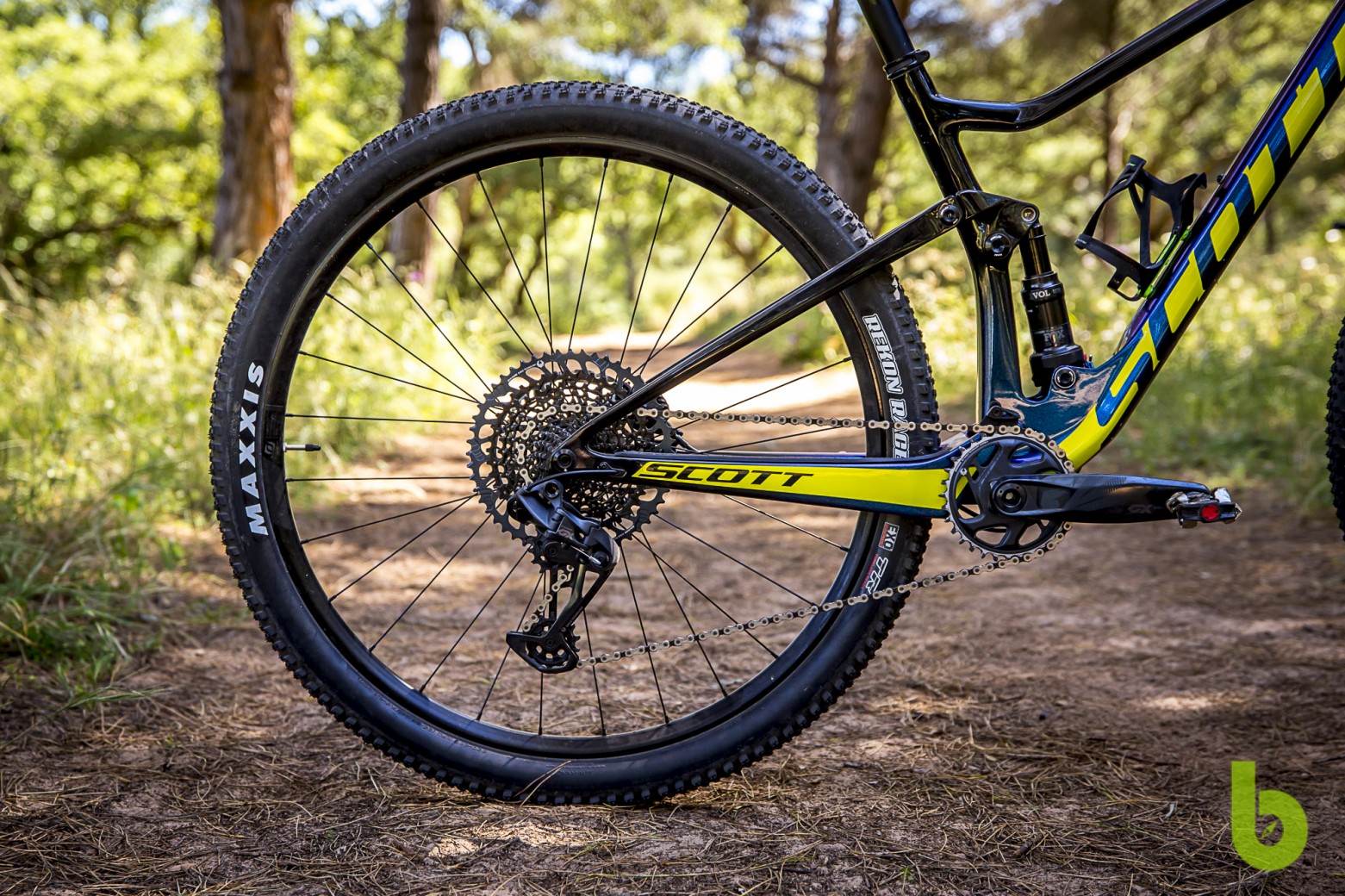 The first of the novelties that we find is the arrival of carbon cranks with DUB technology in the new GX Eagle. The DUB technology presents an improved engineering of the bottom bracket and a new design of the axle, which allows a better approach to the bottom bracket getting less dirt and increasing the durability of the bearings. They are built with SRAM's patented carbon removal technology and are compatible with all SRAM 1X transmissions and earlier versions of DUB technology. 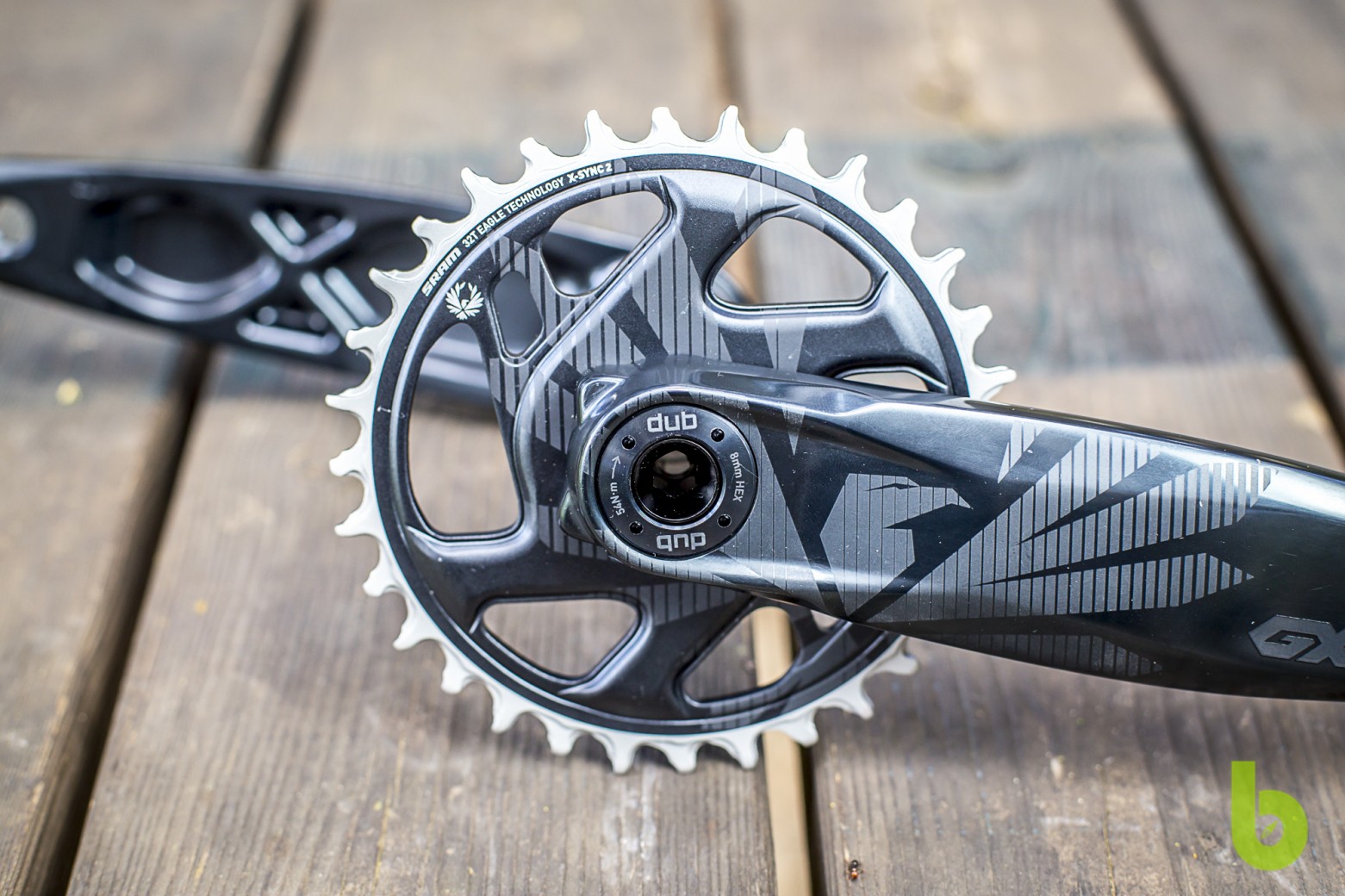 To the cranks they added the renewed SRAM chainring with Direct Mount anchorage similar to the rest of the upper groups and with X-SYNC 2 tooth profile that provides smoothness and precision for the chain.

Also we find the most economical yet lightest choice of aluminium cranks, for less demanding bikers who are looking for good performance. And with the new DUB technology and the same chainrings in terms of number of teeth and quality. 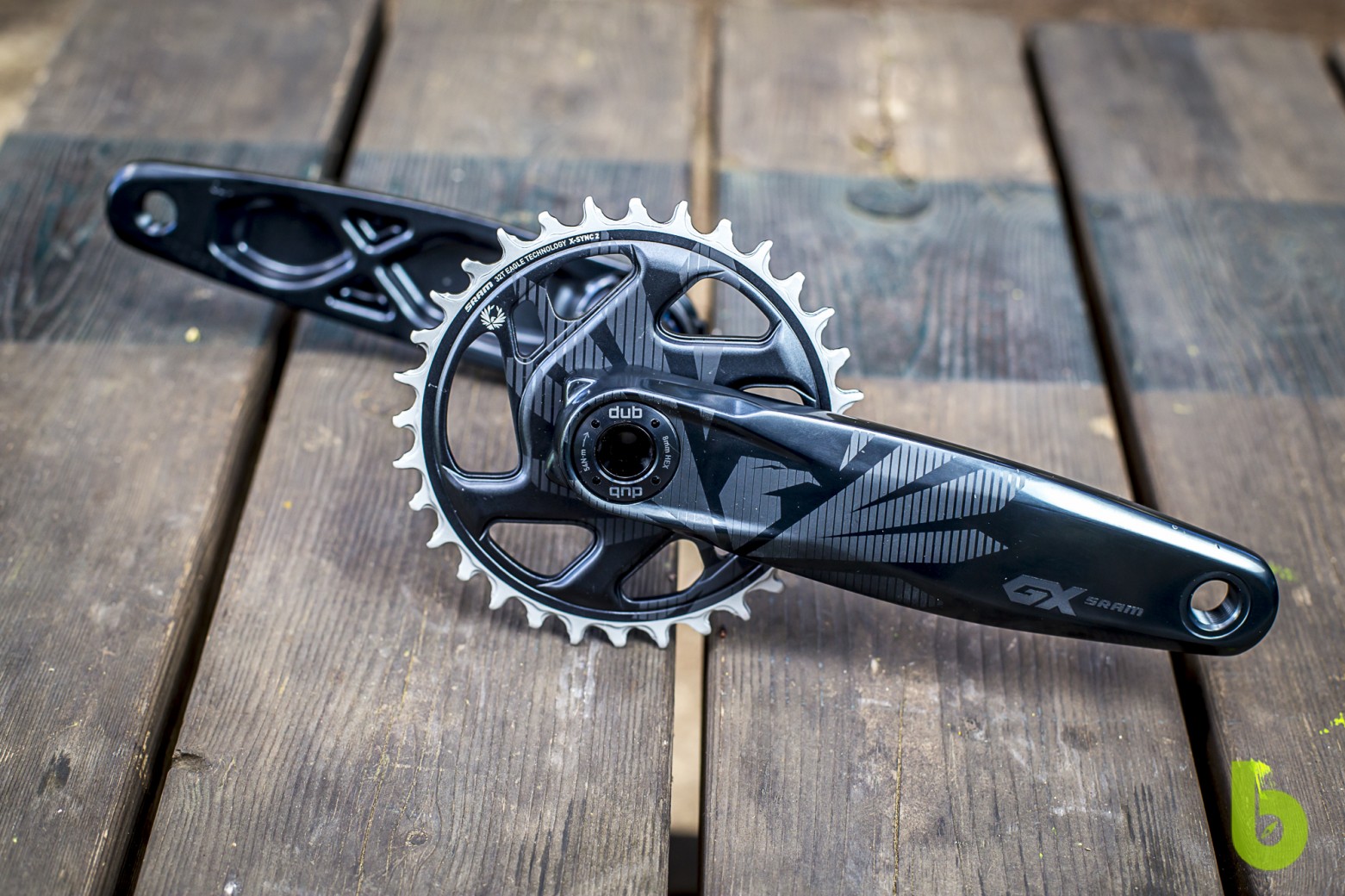 Both sets are looking good with the new Lunar color. 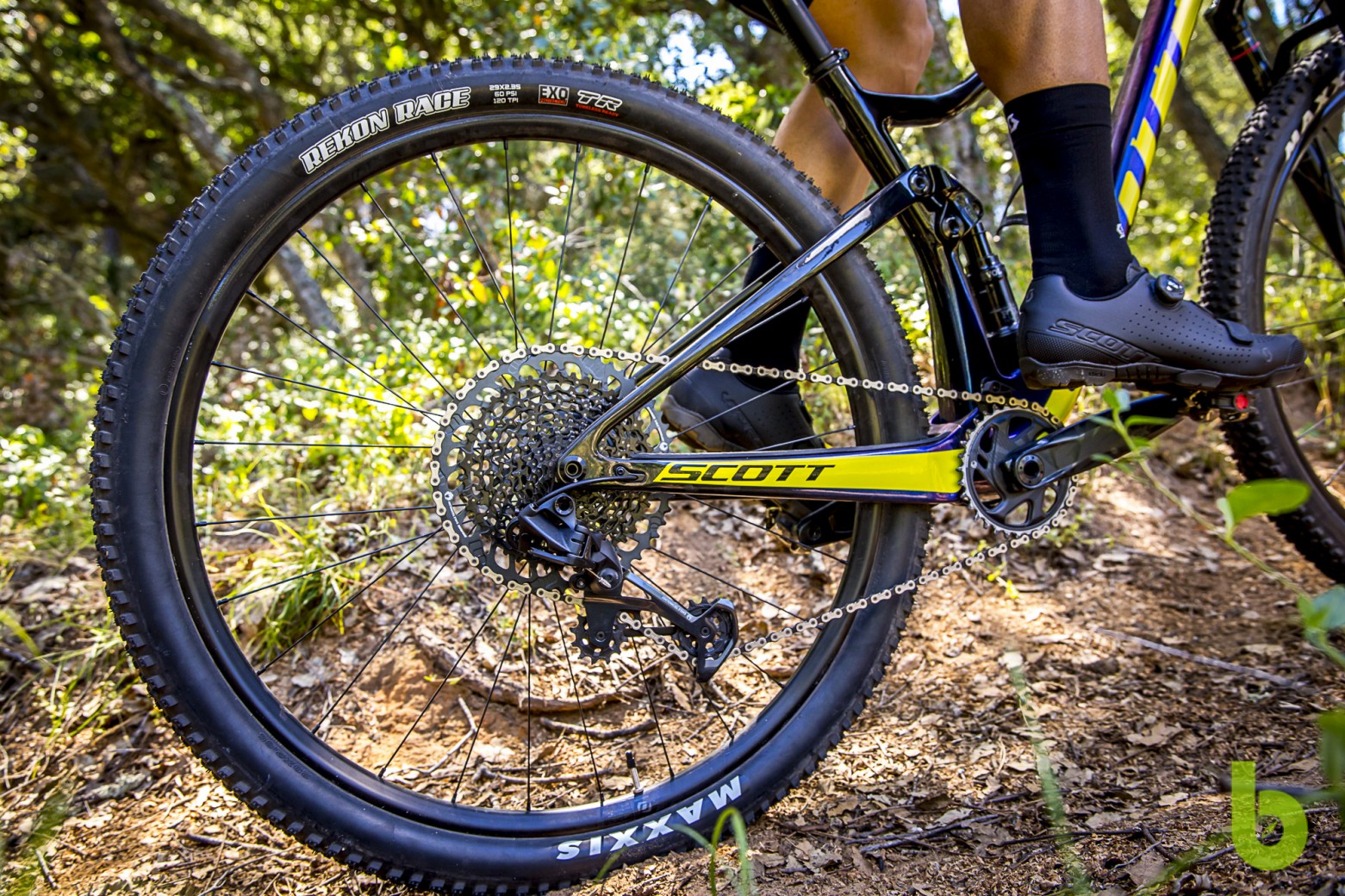 Although after first glance we were not the biggest fans, the rear derailleur has been significantly upgraded, modifying the design of the box in which the top roller is moved backwards, allowing the derailleur to work with the new 10-52T cassettes, as well as being compatible with the previous 10-50T versions. A change has been created in which functionality and precision are achieved. In short, it performs correctly avoiding any type of failure. 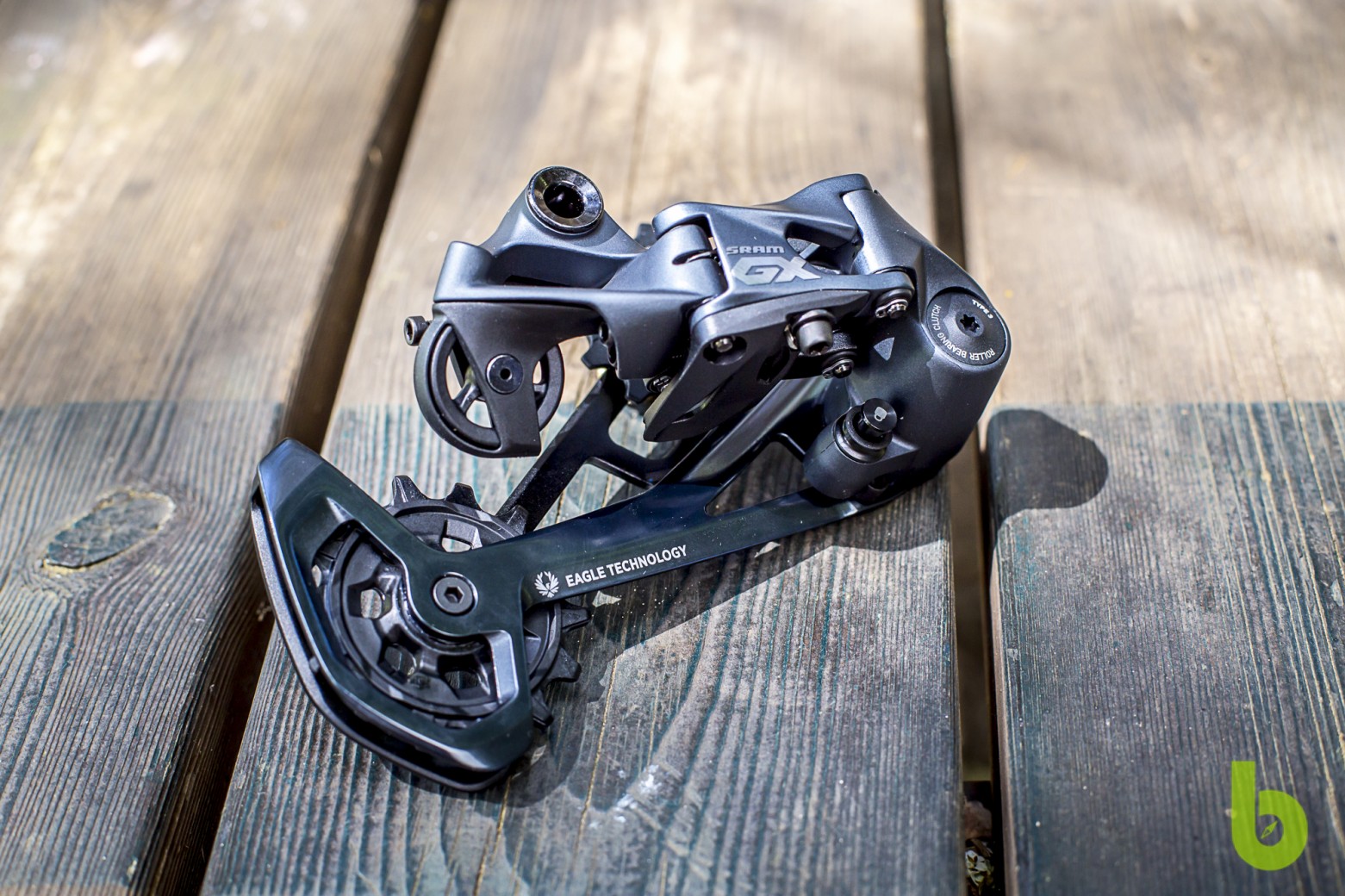 The rest of SRAM's technologies are continued, such as the X-Horizon design, the Type 3 technology, the Cage Lock system and the X-Sync 2. 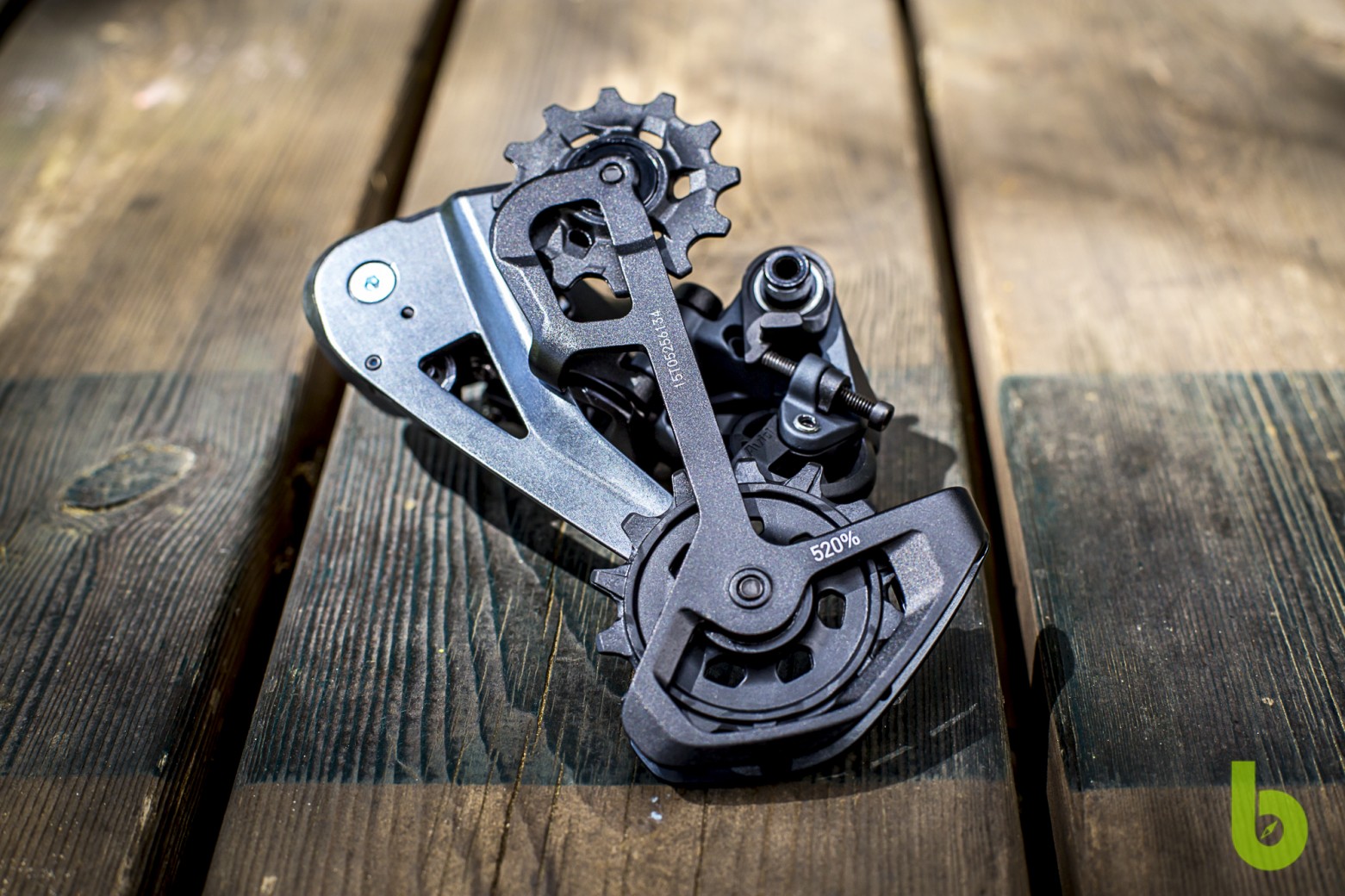 The color completely matches the new colors of the GX Eagle range. The actual weight is 299g and is priced at 124€.

The new Eagle 10-52T cassette increases its range up to 520% to become much more versatile, both uphill and downhill, while outperforming its competitors, the Shimano XTR is 10-51. It is manufactured using Full Pin technology, in which steel sprockets are connected to each other by using stainless steel pins. It continues to use the X-DOME design that get rid of dirt to keep the cassette in the best possible condition to achieve longer life for all the components of the group and more precise shifting. The standard XD body is still used. 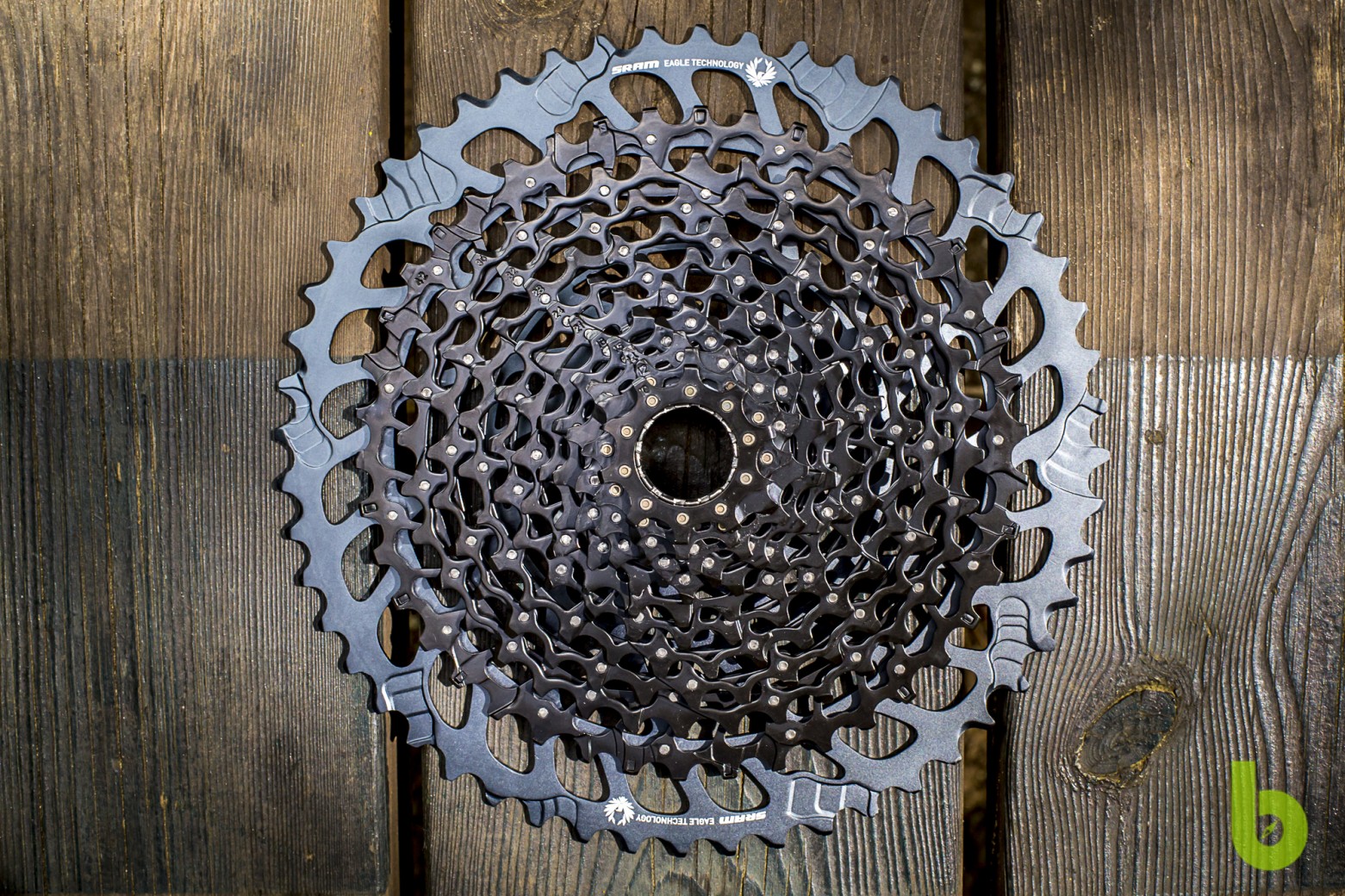 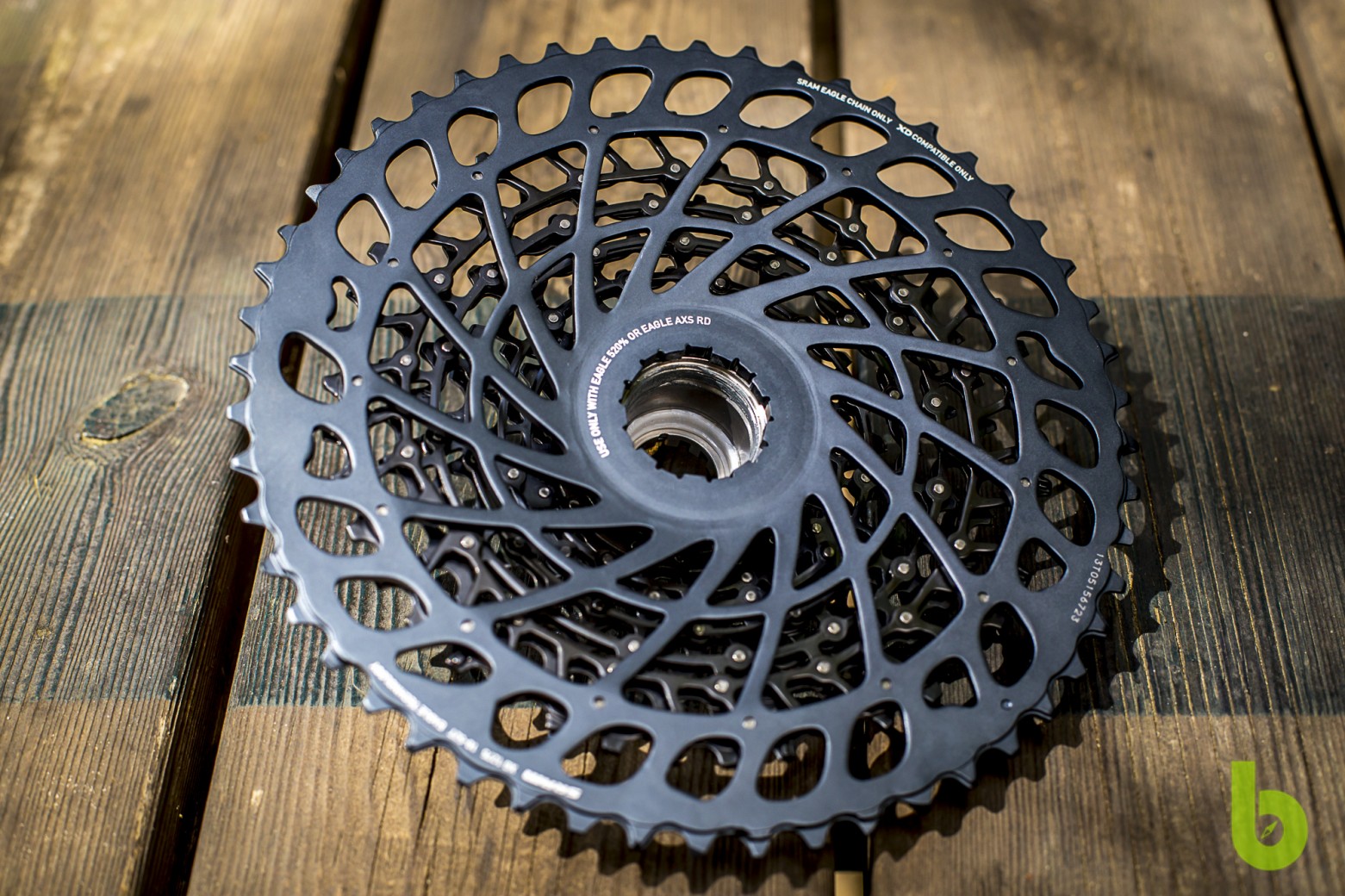 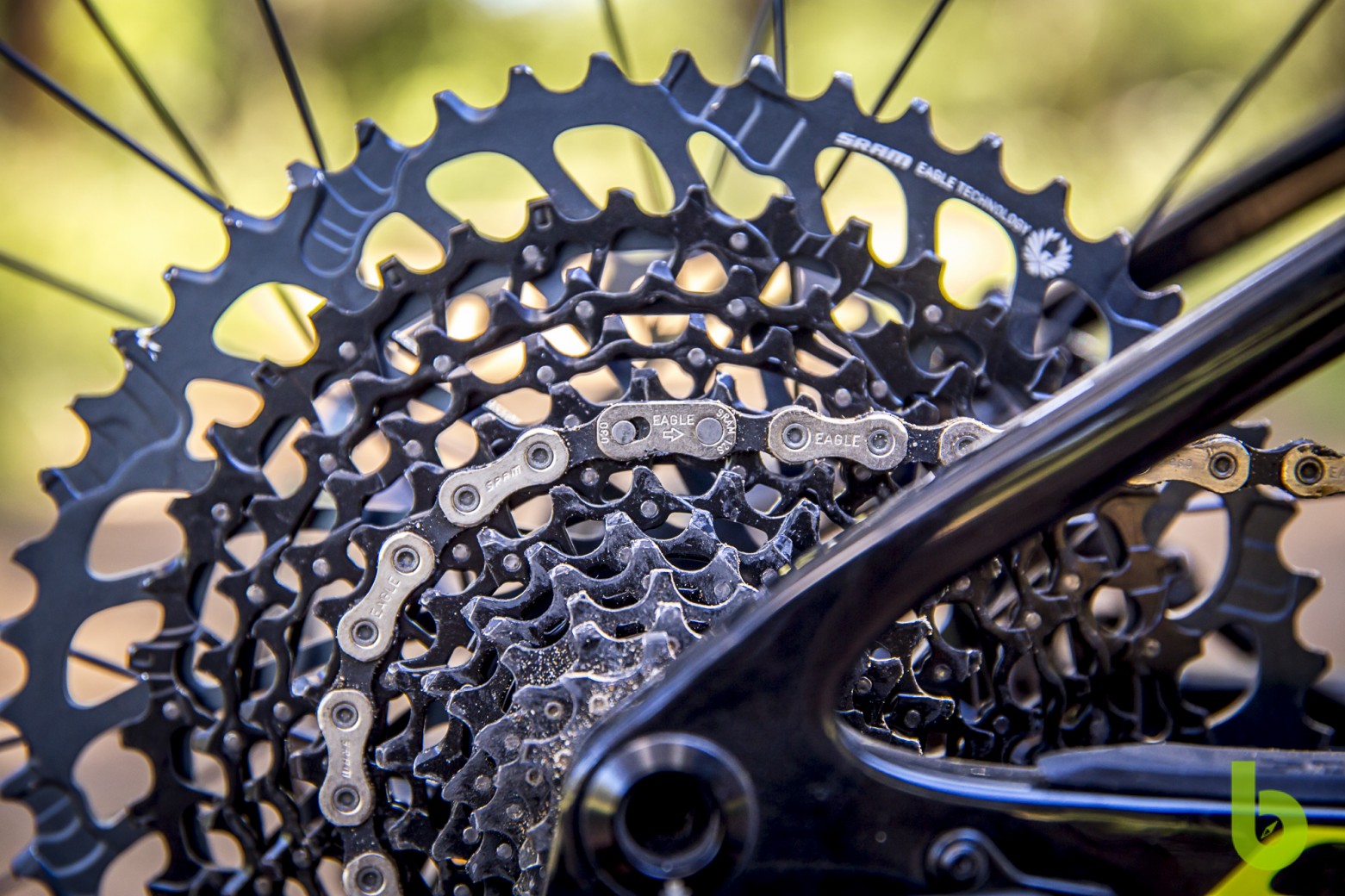 Although the chain is the same as the one we knew but with the new Lunar Black finish, we have been able to see that the quick link now has less curvature than in the previous version. This makes it easier to fit and to reinforce that "weaker" link. It also improve the performance of the group and prevent wear and tear on the assembly.

The trigger has little renewal, it is still triggered with the thumb for clear and precise shifting, but unfortunately the shifters are still not adjustable in position. It is made of aluminium which gives it a pleasant touch and makes it more durable. The X-Actuation and Zero Loss technologies are continued. 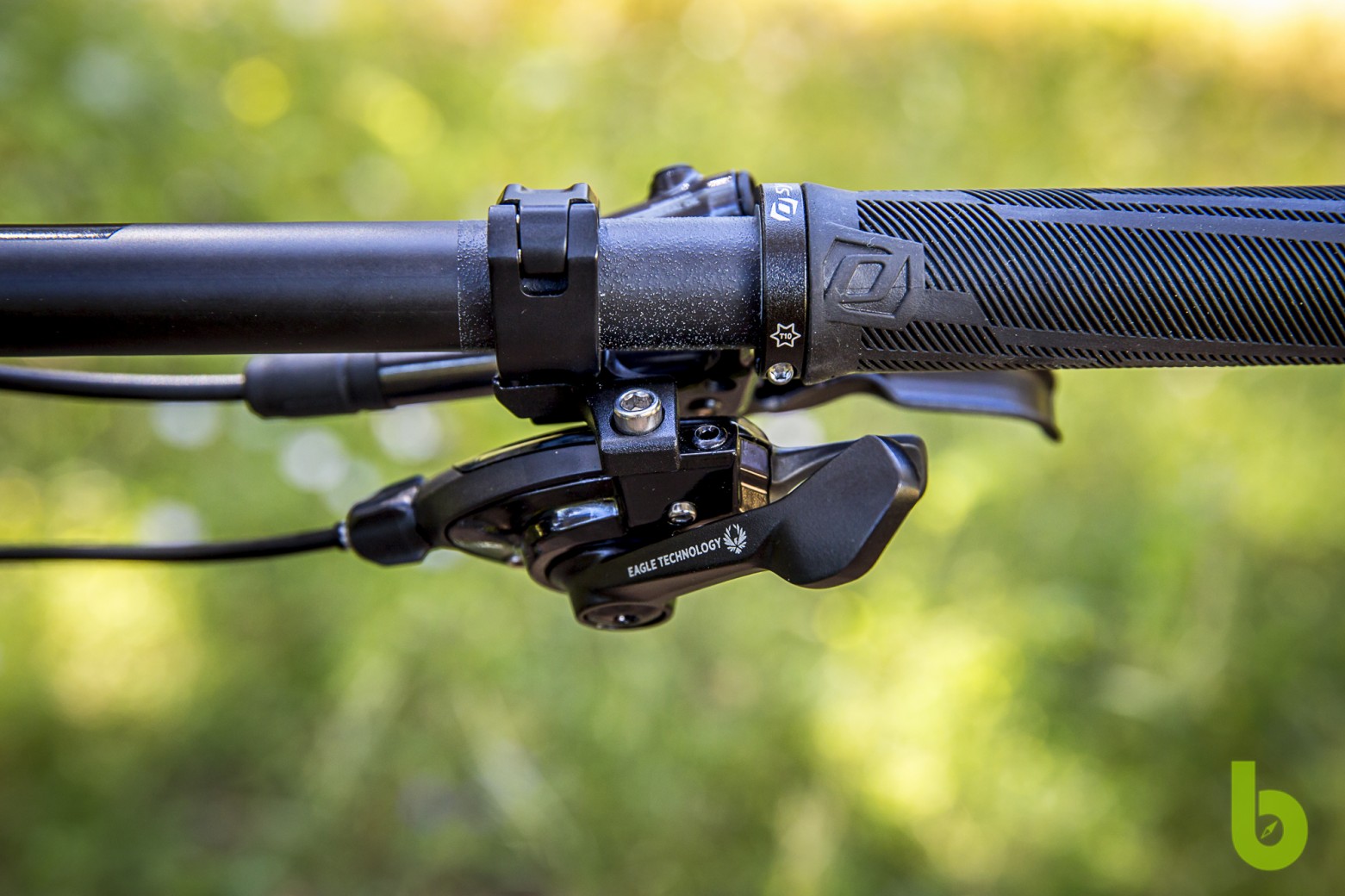 It is compatible with MatchMaker X and like all other components is updated with the new Lunar Black color. It weighs 122g.

The group also has a new trigger, the GX Eagle Single Click designed specifically for E-MTB, which helps to preserve the chain from fast wear or breakage due to excessive shifting. This is achieved by limiting the shifting to one gear per click.

The announced price for both shifters is 41 euros.

Another important new feature of this new group is the adjustment tool, called B-GAP. This new tool will make drivetrain adjustment much easier, allowing faster and more accurate settings. Unlike the previous gauges of the first version of the SRAM Eagle, this one is suitable for all models and is smaller.

And since this is also an important thing today, this tool can be recycled at the SRAM factory when we are no longer using it. 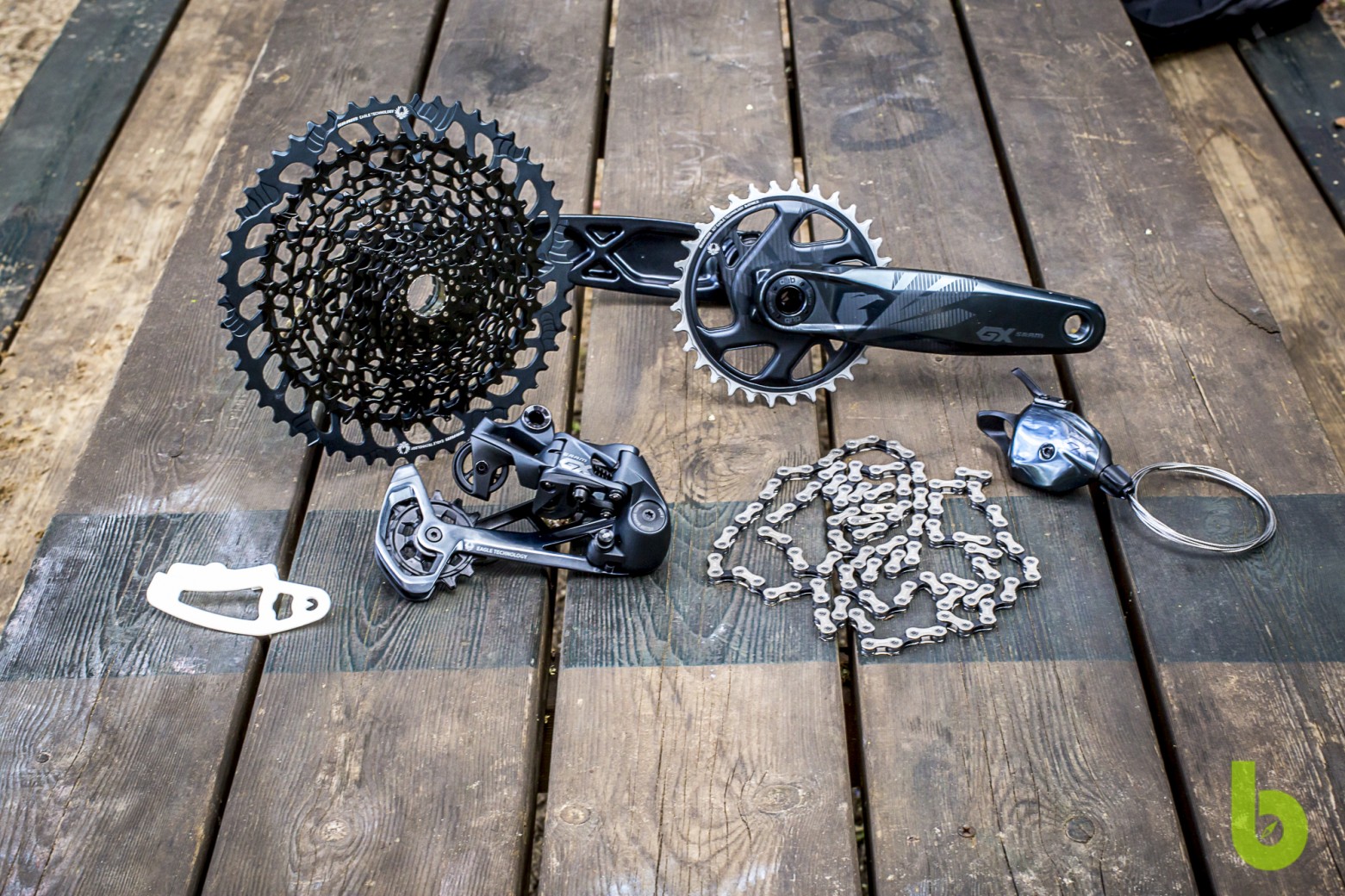 The price of the complete group is 555 euros, a competitive price if we compare it with the excellent performance it offers.

We have been lucky enough to test the operation of the new GX Eagle 520% on the trails for more than 300 kms, riding it on one of our test bikes and going out on different routes in search of the feeling that this renewed group from SRAM brings to us.

After assembly we could see that the adjustment of the derailleur with the new B-GAP tool is very simple. You put the chain on the second gear (42T) and put the gauge as shown in the picture, without the need to hold it, and you only have to adjust the tension of the gearbox with a 3mm allen key until the screw of the upper pulley is in the center of the hole of the gauge (as you can see in the picture). With this we will be able to get the best performance from our derailleur and we will notice the smoothness and precision of the new group. 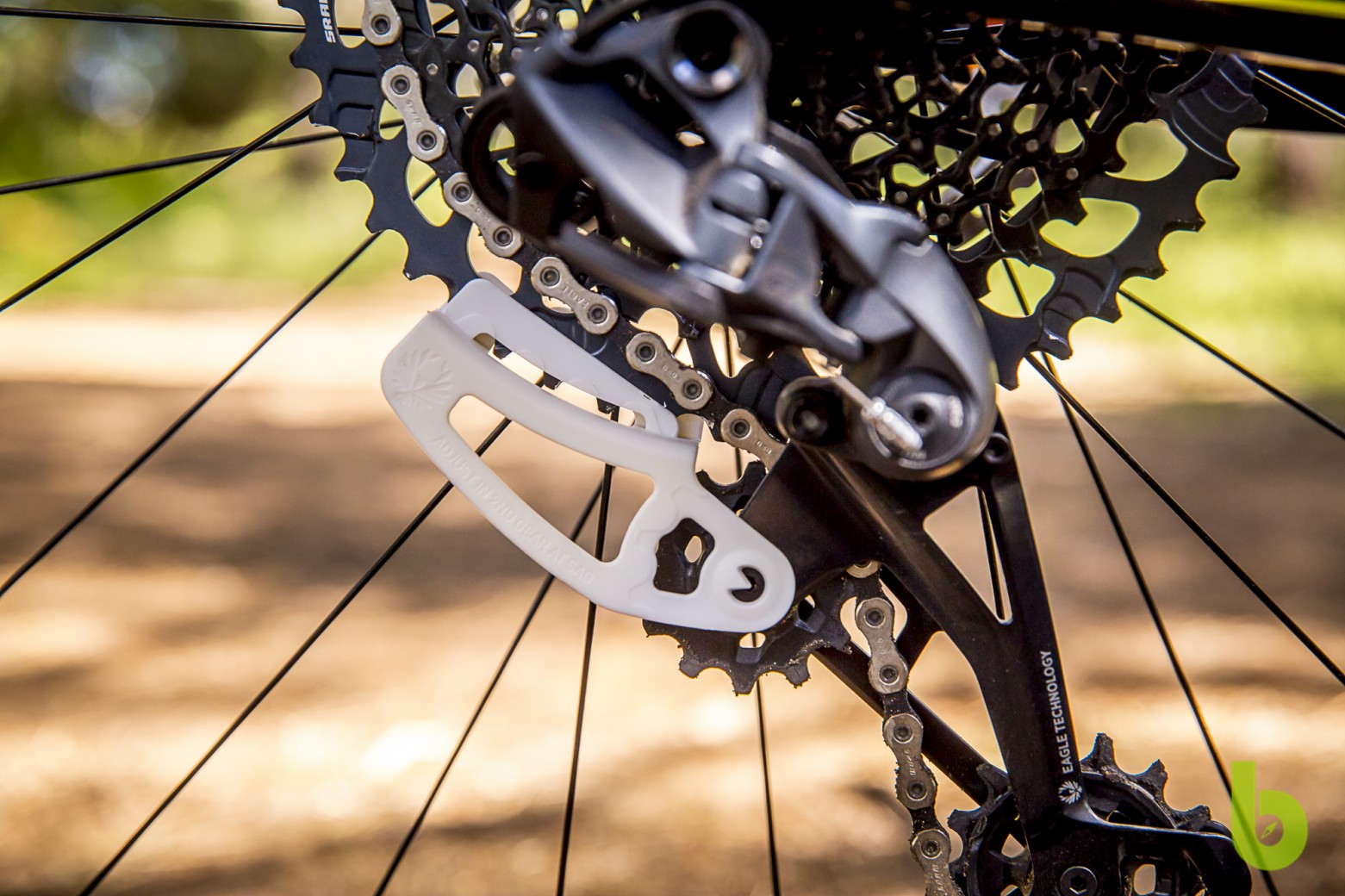 With everything ready we went out to try and the first sensations were not new, the trigger has no mechanical changes, so the way of acting remains the same. The "click" is clear and without making you doubt whether you have pressed or not, the gear responds to these moving in the direction indicated without hesitation. The movements are rough and dry but there is no doubt that as soon as you hit the trigger the shifter makes the chain go to its place. It is fast and although a little softer, it is true that this is not its main feature. The ergonomics are pleasant and allow us to lower gears one by one and quickly shift up to a maximum of five gears at once. The lever offers two positions with which you can adjust up to 12 mm sideways to match better with the brake lever, as well as having the possibility of placing the MatchMaker X. 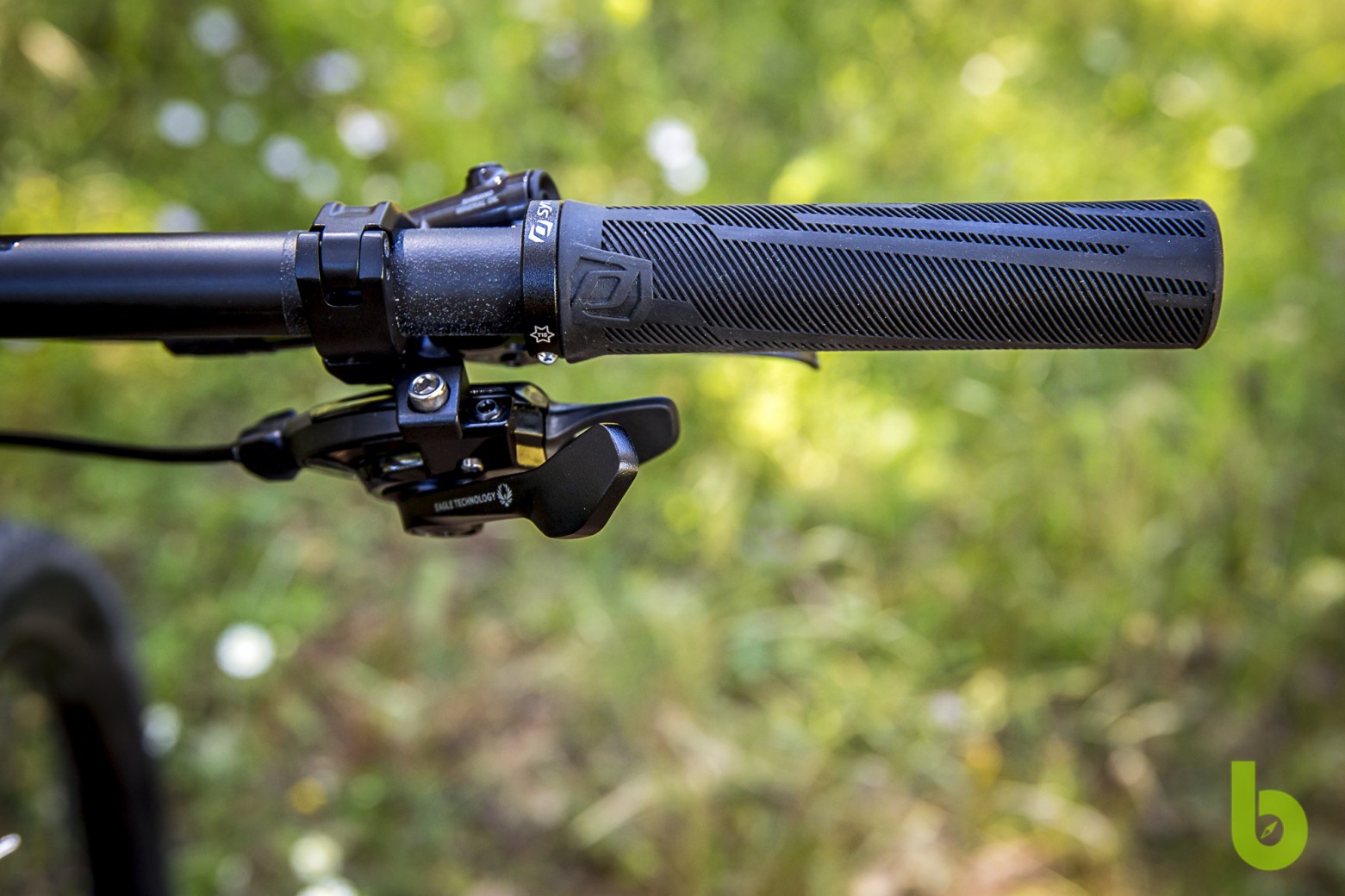 We go up and down the gears as the route demands, all of them work perfectly surprising us with their precise and reliable shifting. The performance now is closer to their big brother: the X01.

The time has come to test the performance of the 52-tooth gear on a hard climb. We put the big gear in and, here you can see the difference in teeth between the two rings, which is now 10 teeth, the gear does its job correctly except that it is a little slower than in the rest of the rings, which is normal given the big jump we make. Let's look at the tension of the gearbox placed on this first gear, thanks to the position of the upper pulley it is similar to the one that remains with the 10-50T cassette. 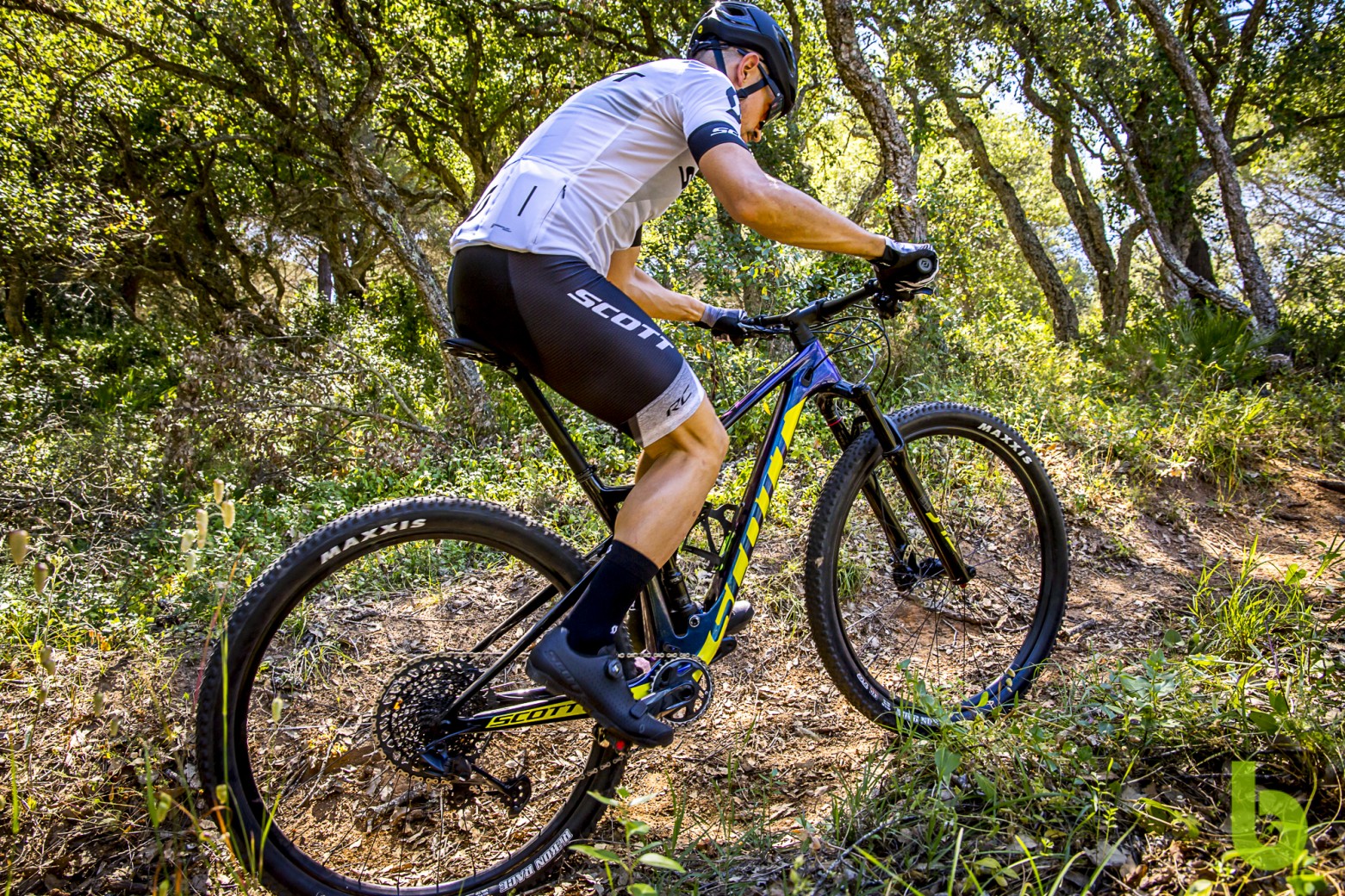 With the 52 tooth gear and the 32 tooth chainring, you can climb almost any slope, without forgetting to position your body correctly, because with these developments it is increasingly easier for the bike to lift off the front wheel. 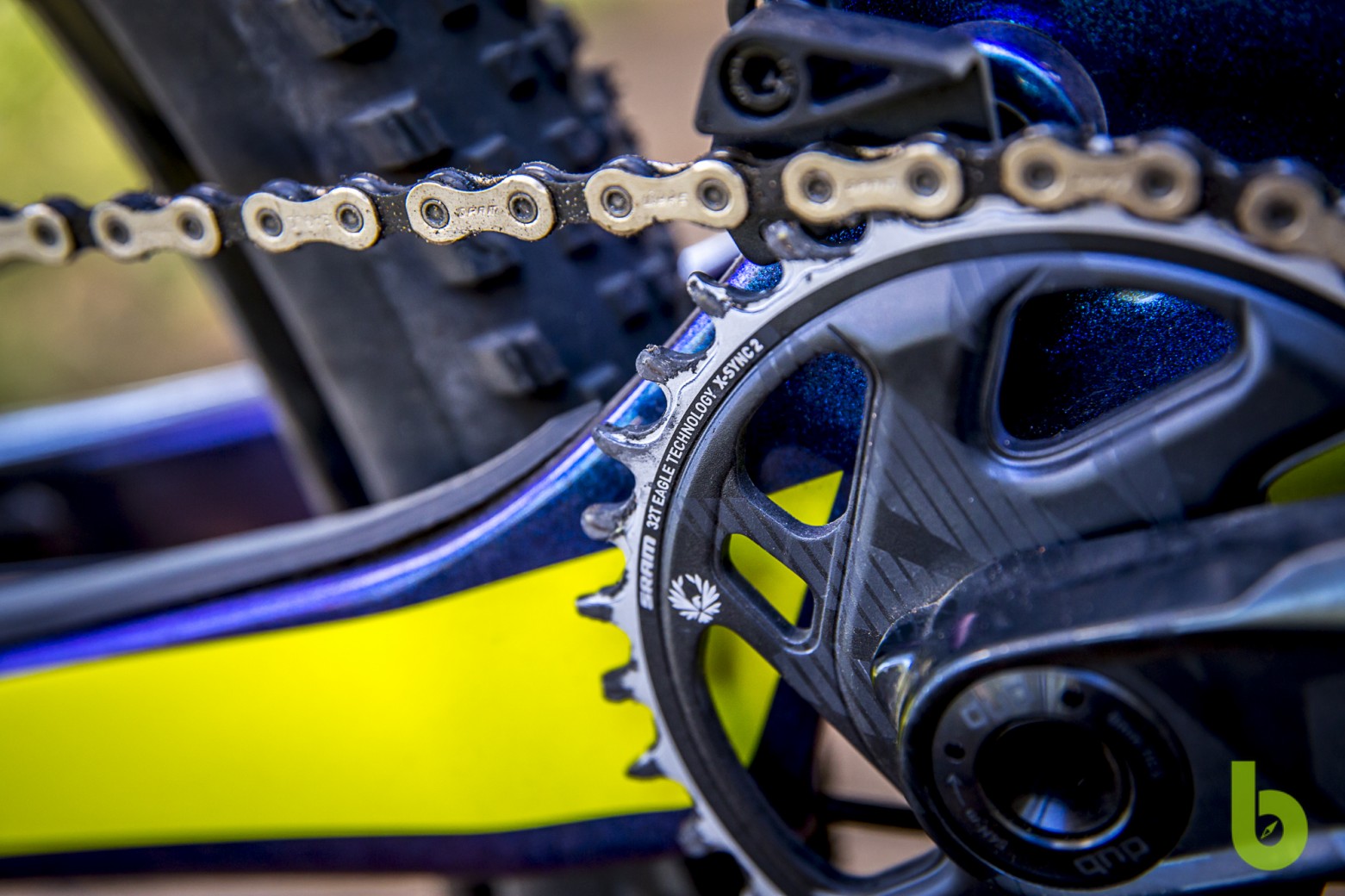 The aluminium crankset feels stiff and is accompanied by the X-Sync 2 type chainring which offers durability and smooth chain running. Both do their job without any problems. For the most demanding riders there is the option of the carbon cranks, which we haven't had the chance to try but which would certainly give us extra stiffness. 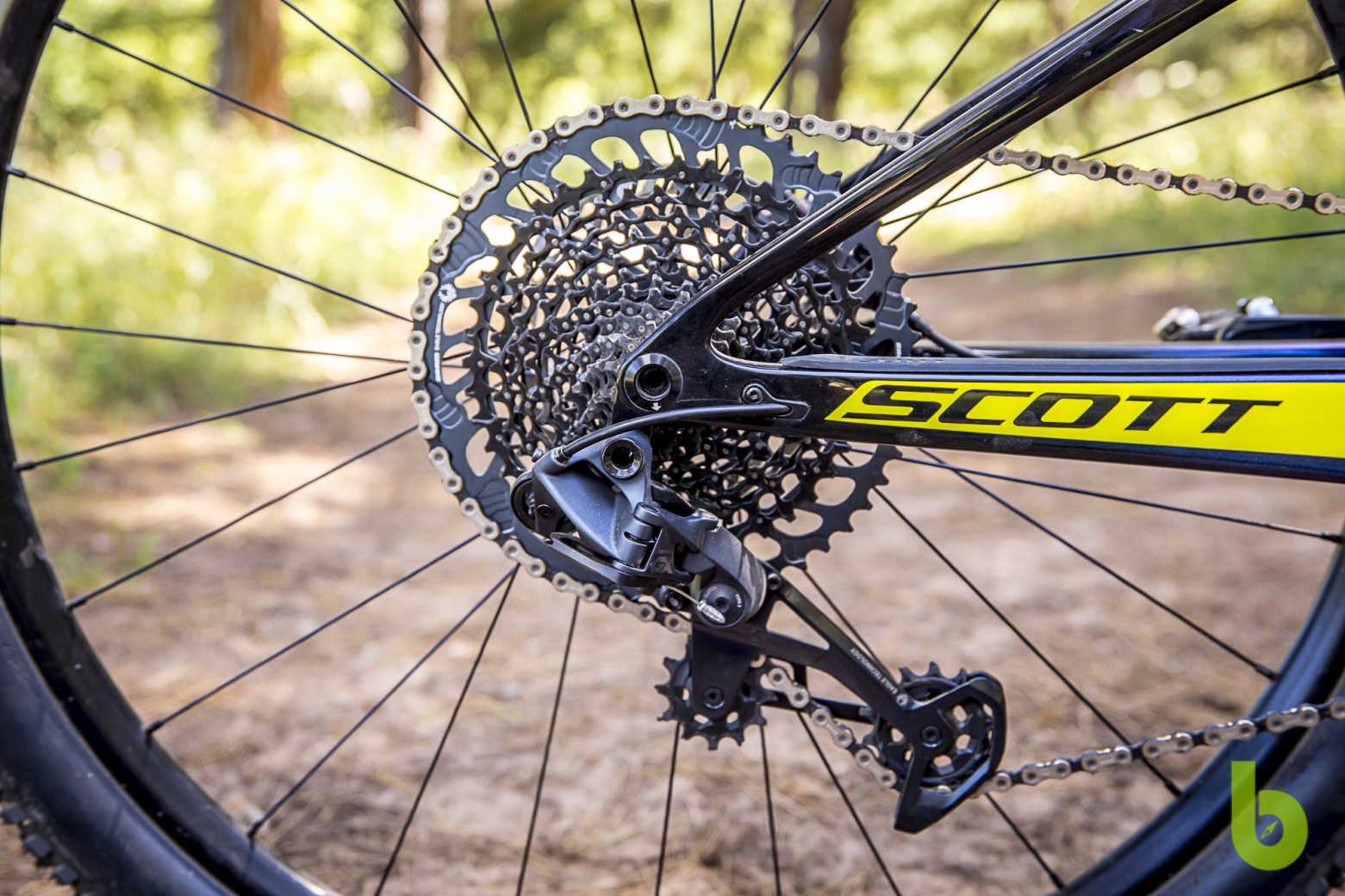 With the passing of the kilometers we have not noticed any maladjustment in the operation of the drivetrain, remaining stable at all times. We only need to talk about how the components age and function after a long period of testing. 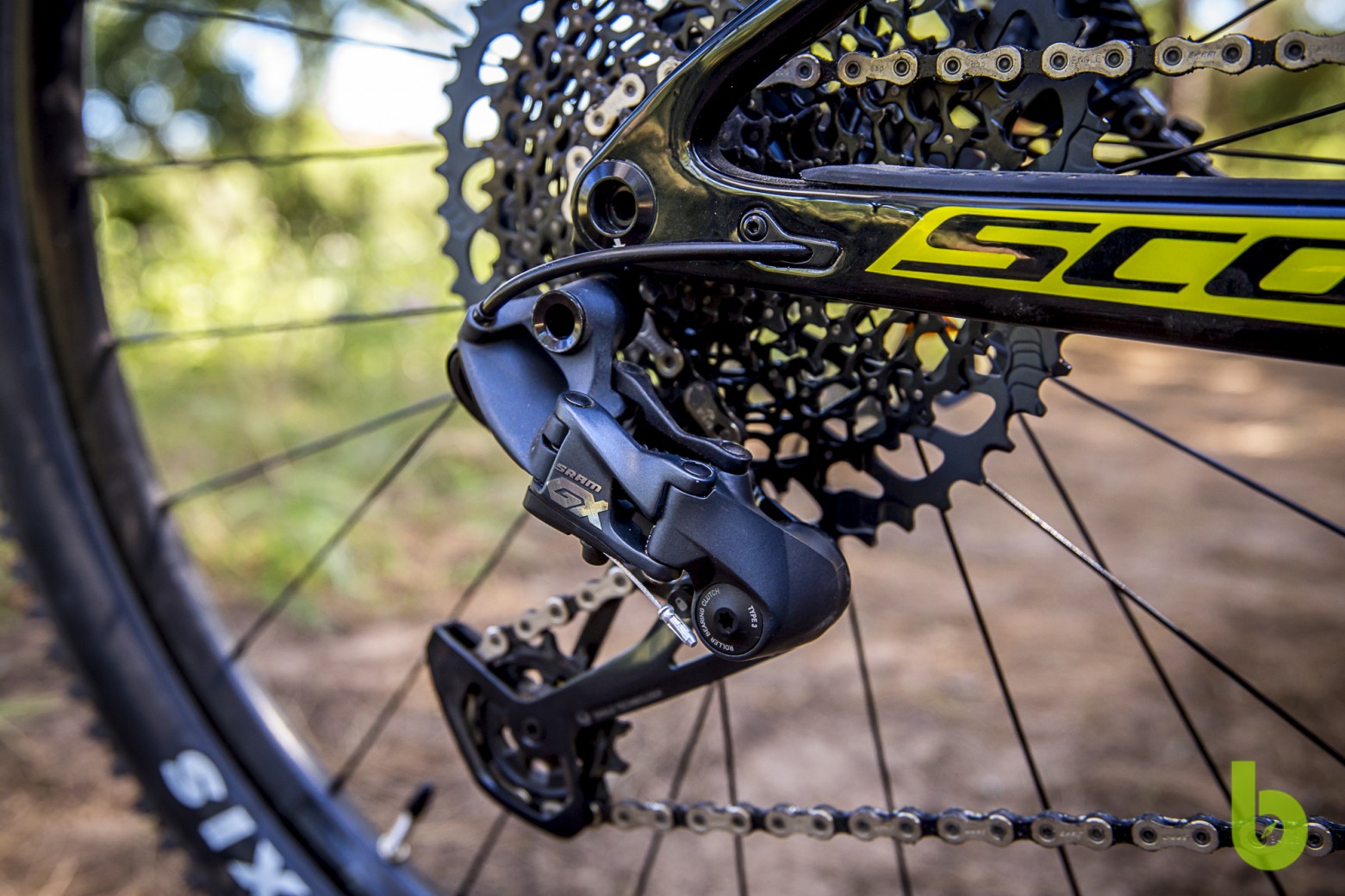 Conclusions on the SRAM GX Eagle 520%

In general we have quite liked the new SRAM Eagle GX group, with its performance very close to that of its big brothers. Although SRAM comments that it is a group focused on reducing the effort in the most extreme climbs with the intention of being able to spend more hours on the bike, we also see that it is a good option to put a chainring with a bigger tooth count, for those bikers who previously were hesitant to increase the chainring diameter or not.

Improvements have been made to increase the durability of the group's components, something that will have to do with time but which is more than welcome.

The XD body continues to be used without any changes, so if you decide to upgrade your drivetrain you can do so without having to make another extra payment.