After several generations, a few months ago the Cannondale Scalpel 2021 was presented, the latest version of a reference full mountain bike and a regular on the podium in both XCO and XCM. With this latest upgrade Cannondale has gone one step further in engineering and design with the Flexpivot system and we have now been able to test the top of the range Cannondale Scalpel Hi-MOD Ultimate 2021. 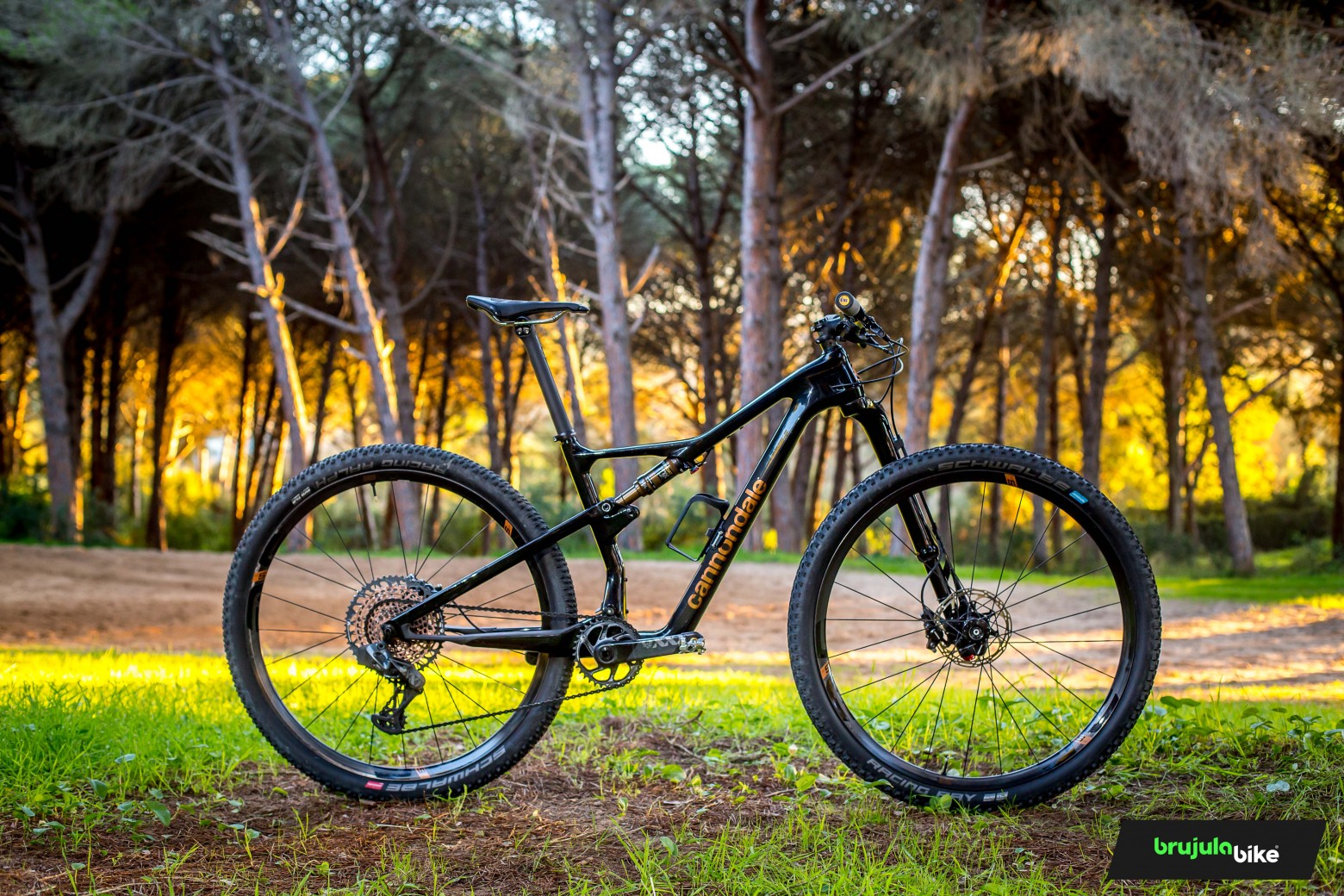 New Cannondale Scalpel 2021. The future inspired by the past

As we know, the most remarkable detail of this new frame is found in the rear triangle, in the pods. In the area where a possible Horst Link joint would go, the sheaths flatten out and become a very thin carbon plate, seen from the side, but at the same time very wide, so that it allows vertical bending as if it were a Horst Link joint, but tremendously stiff laterally. 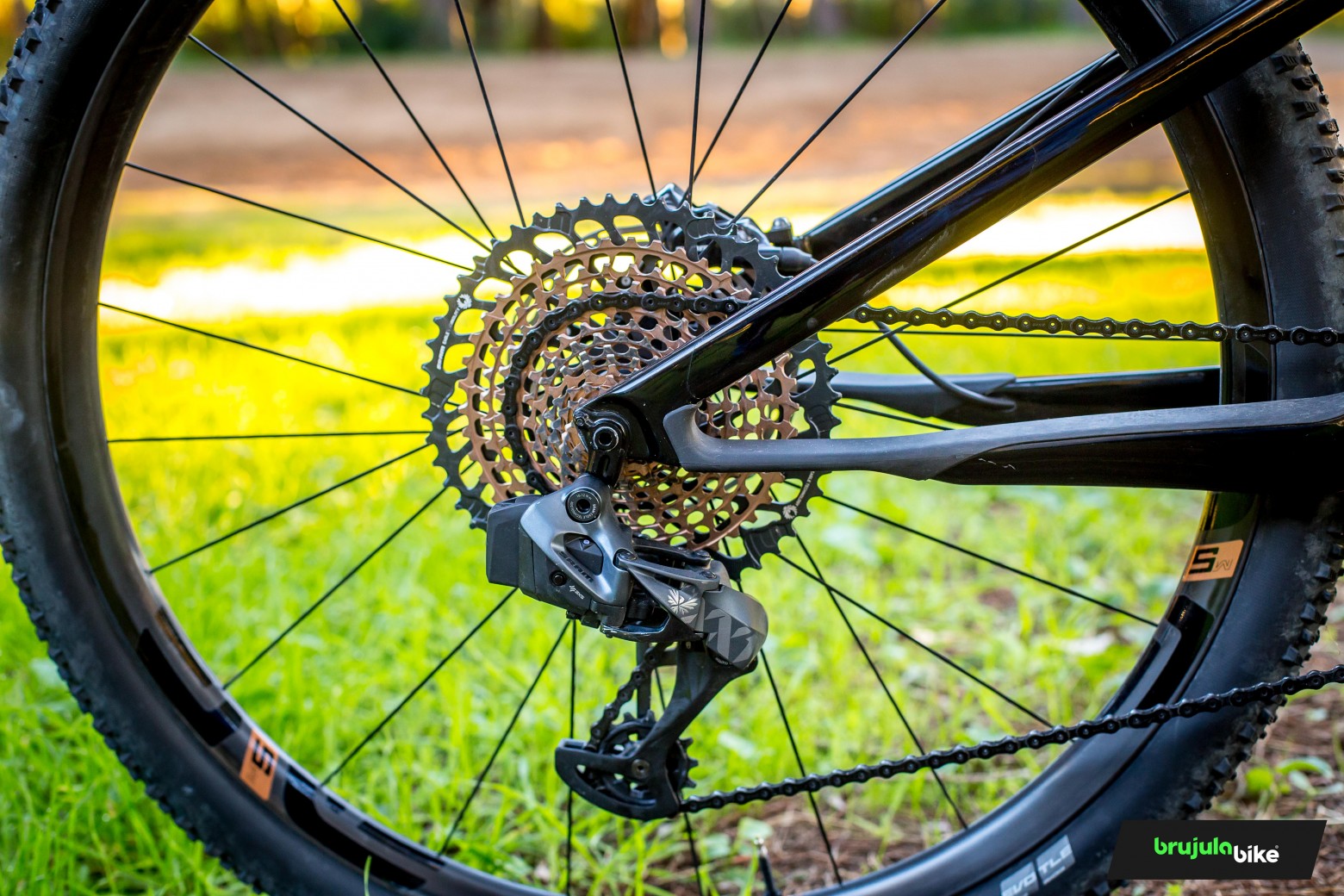 Cannondale calls it the FlexPivot and announces that it gives the benefits of the Horst Link but being lighter, more stiff and more durable, and obviously maintenance free. Here you can read more about this system.

And going on with the pods, but this time in the front, there is another detail that continues to demonstrate the design work that this frame has, the Chainstay Garage. It is the union of these with the front triangle, that is, the main pivot. Contrary to what is usual, the pods are not anchored to the outside of the vertical tube, but rather the tube forms a structure into which the pods are inserted, giving an impression of great stability. 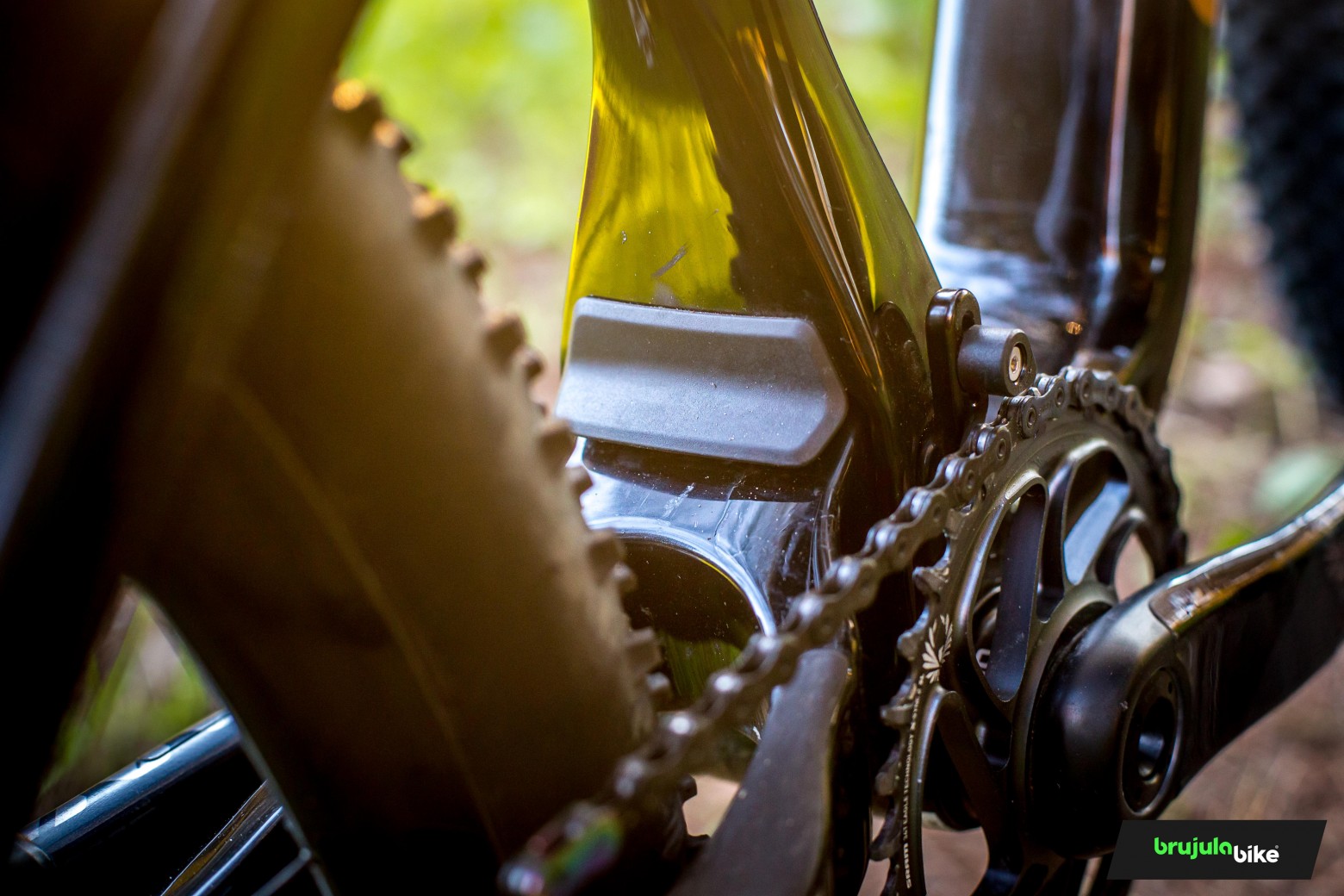 The asymmetrical Ai rear design provides greater stiffness at the rear wheel due to more balanced spoking. This also makes it possible to have a large wheel arch even with generous ball tyres while keeping the pods short.

In addition, on the rear axle we have the Speed Release system, which allows us to remove the wheel more quickly, unscrewing the axle but without having to remove it completely from the wheel.

Thanks to the Proportional Response, each size is designed with its own suspension kinematics. In this way every rider, from the smallest to the tallest, gets the same suspension behaviour. 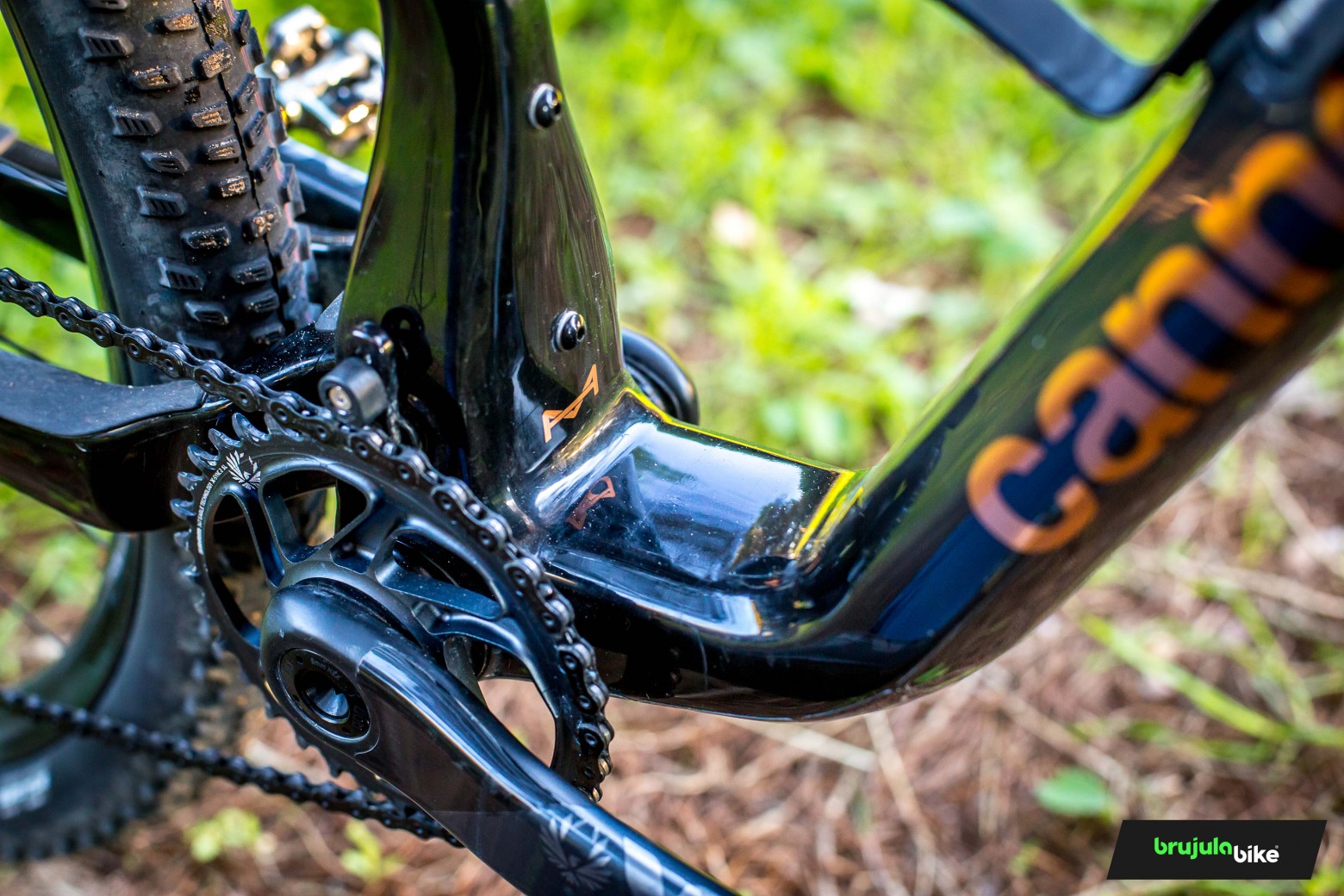 The BallisTec Hi-Mod carbon construction has reduced the weight of the frame to an incredible 1910 grams, including the shock absorber.

Regarding geometry, the current trend is to make XC bikes more and more versatile. This is influenced by the increasingly technical circuits that have been designed in the World Cup in recent years.

The combination of these two measures ends up with a wheel well ahead of the handlebars but with a contained trail, giving the headset sufficient agility.

The frame of this new Scalpel 2021 has also been designed so that two bottle holders can be mounted (except in size S). 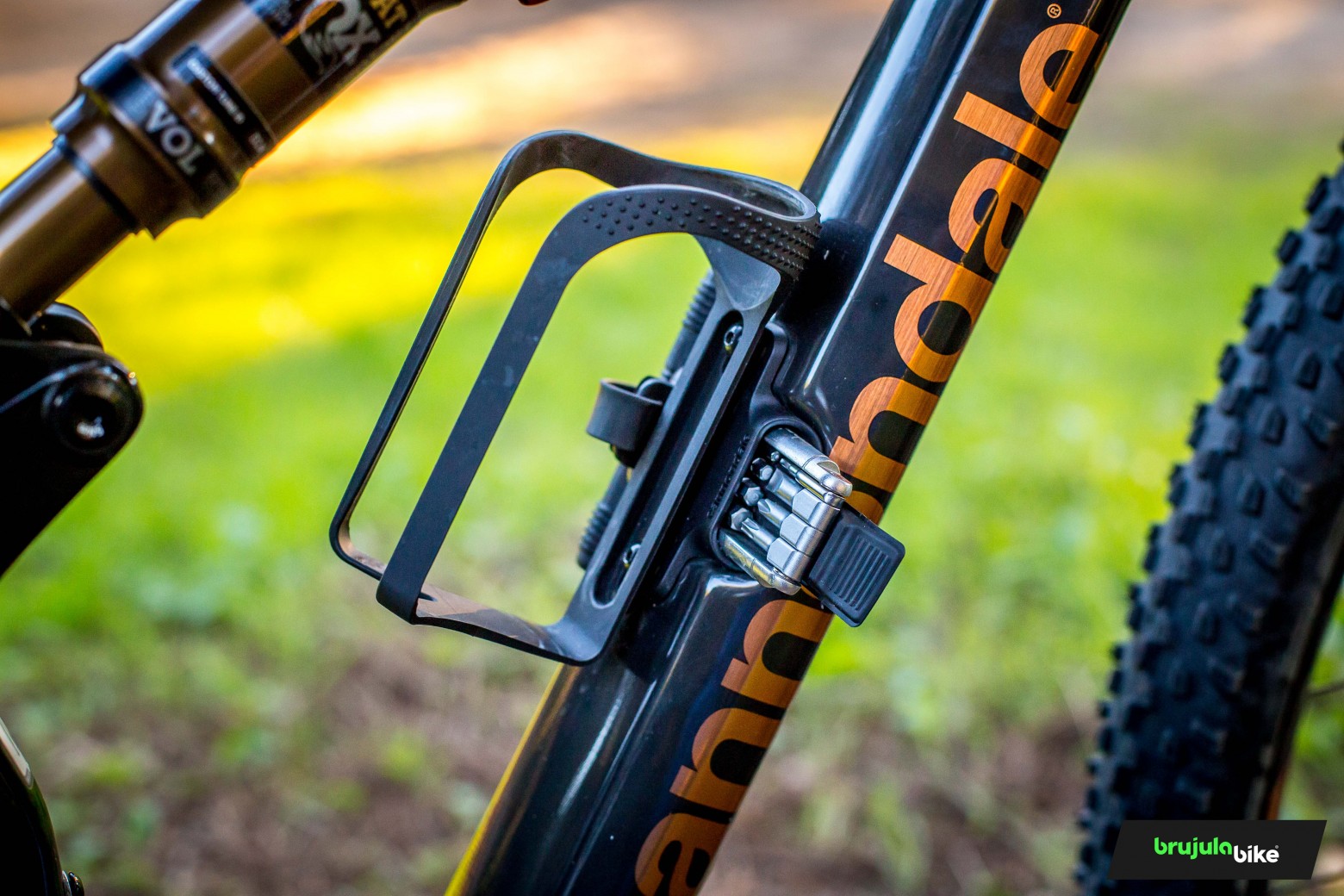 Another interesting new feature is the STASH Kit, which consists of a space designed under the bottle holder where an 8-in-1 mini tool, a quick kit for repairing tyres and a holder for a CO2 bottle are located. Personally we liked it very much as it is very integrated and is very quickly accessible if necessary. 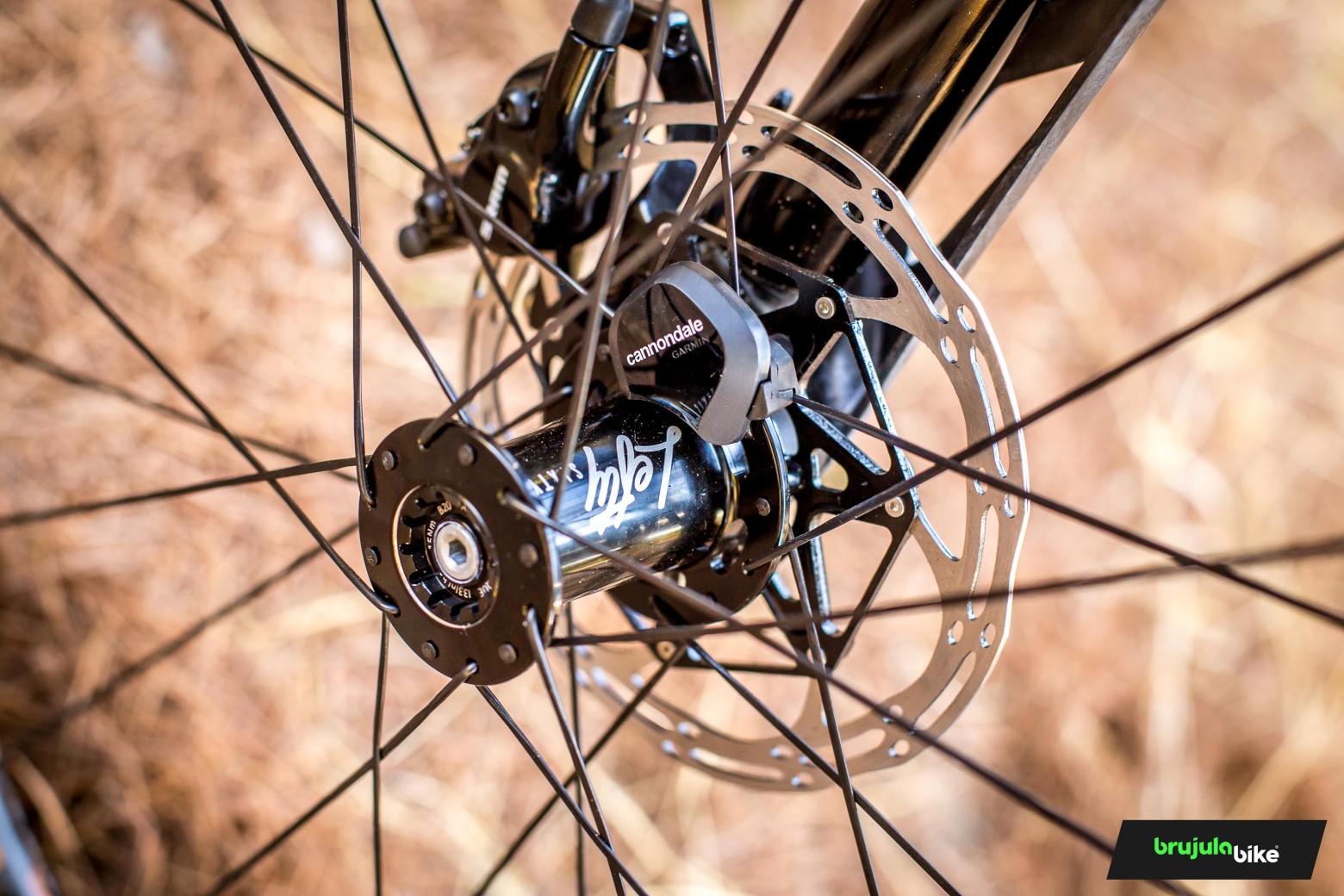 And continuing with the gadgets we find in the front wheel a very useful sensor. Developed in collaboration with Garmin, this sensor via the Cannondale App gives you information about the routes taken without the need to carry another device, with data on distance, speed, etc. In addition, it counts hours of use and kilometres so that it sends you alerts to perform different maintenance.

Lefty. The future arrived 20 years ago

There is no better complement to such a technological frame. Few people doubt that the Lefty is the most spectacular fork on the market. If this fork was invented today it would be a revolution, but it has been with us for more than 20 years. 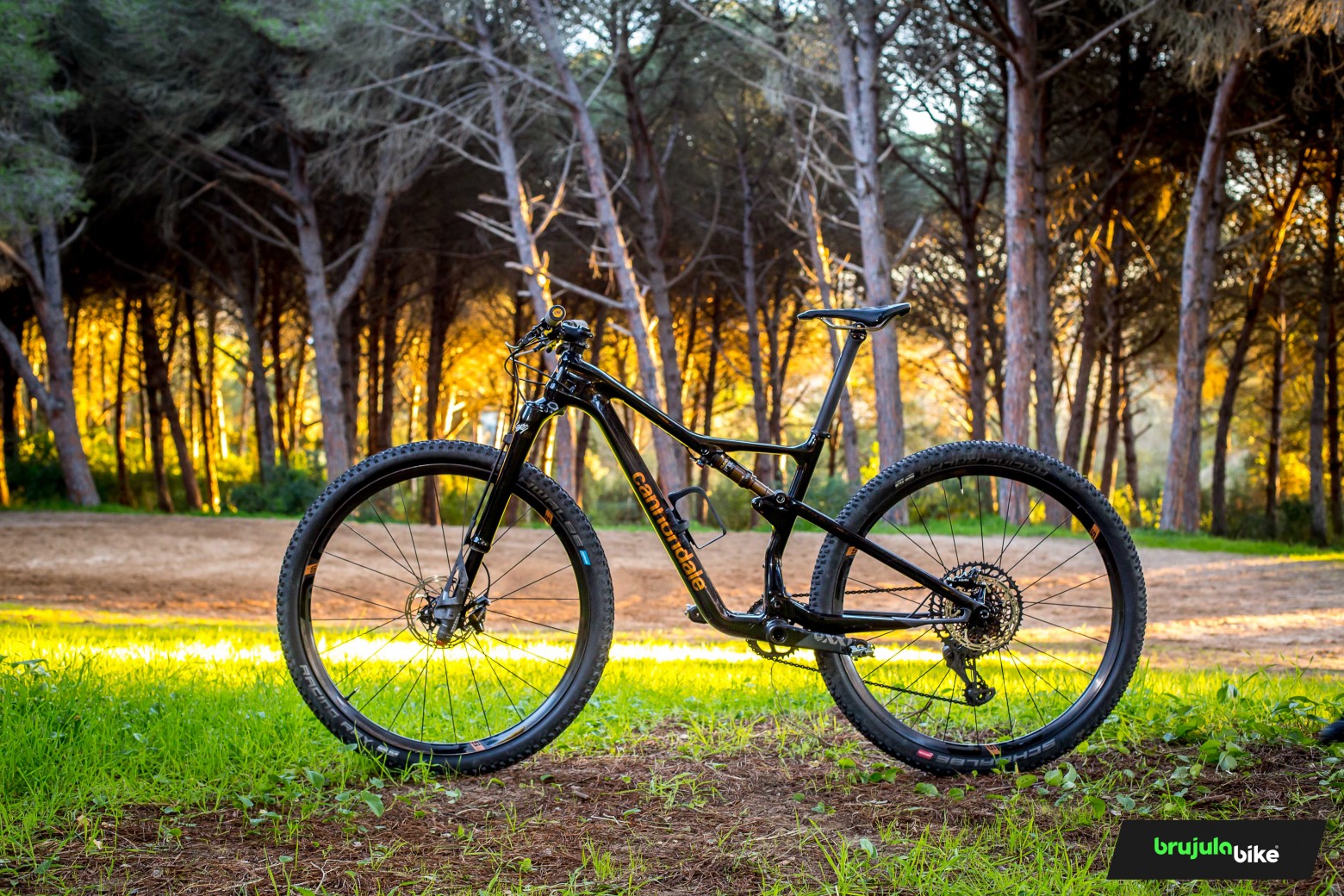 And in the case of the Lefty 8, this is the most important evolution since it came on the market, dispensing with the double deck and adopting a tapered head tube as is common in other frames and forks today, opening up the possibilities of mounting it on any other frame. 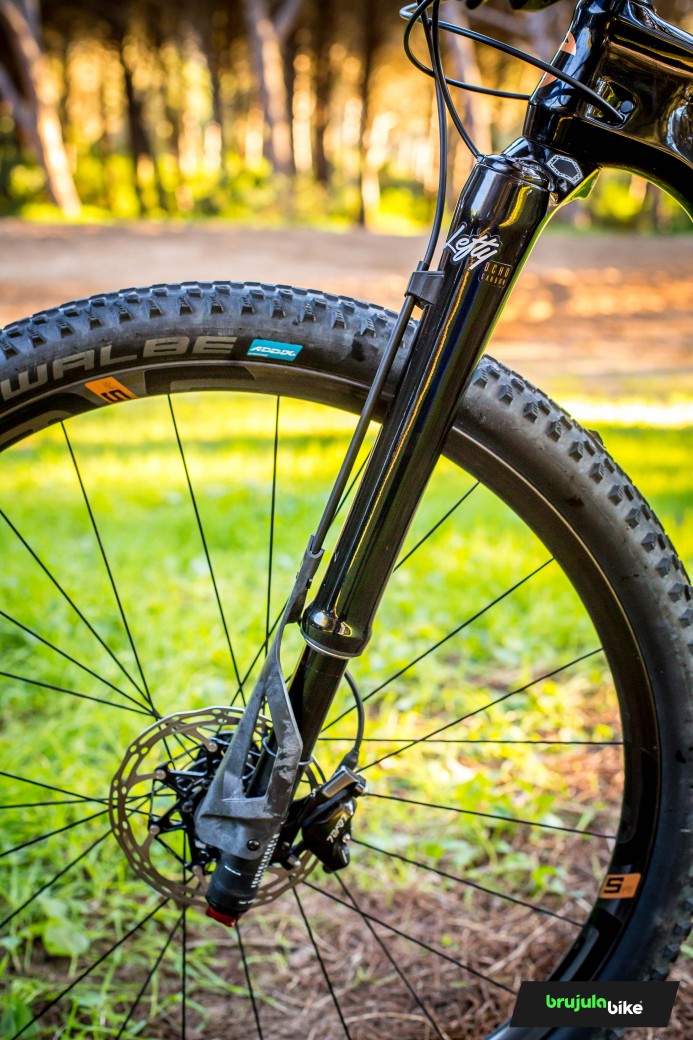 The regulation of this fork is quite simple. It has a table for preloading the air according to the rider's weight so you can put in the right psi and it also indicates the recommended position of the rebound dial (both settings are at the bottom).

At the top, apart from the remote lock, there is a dial to regulate the compression. 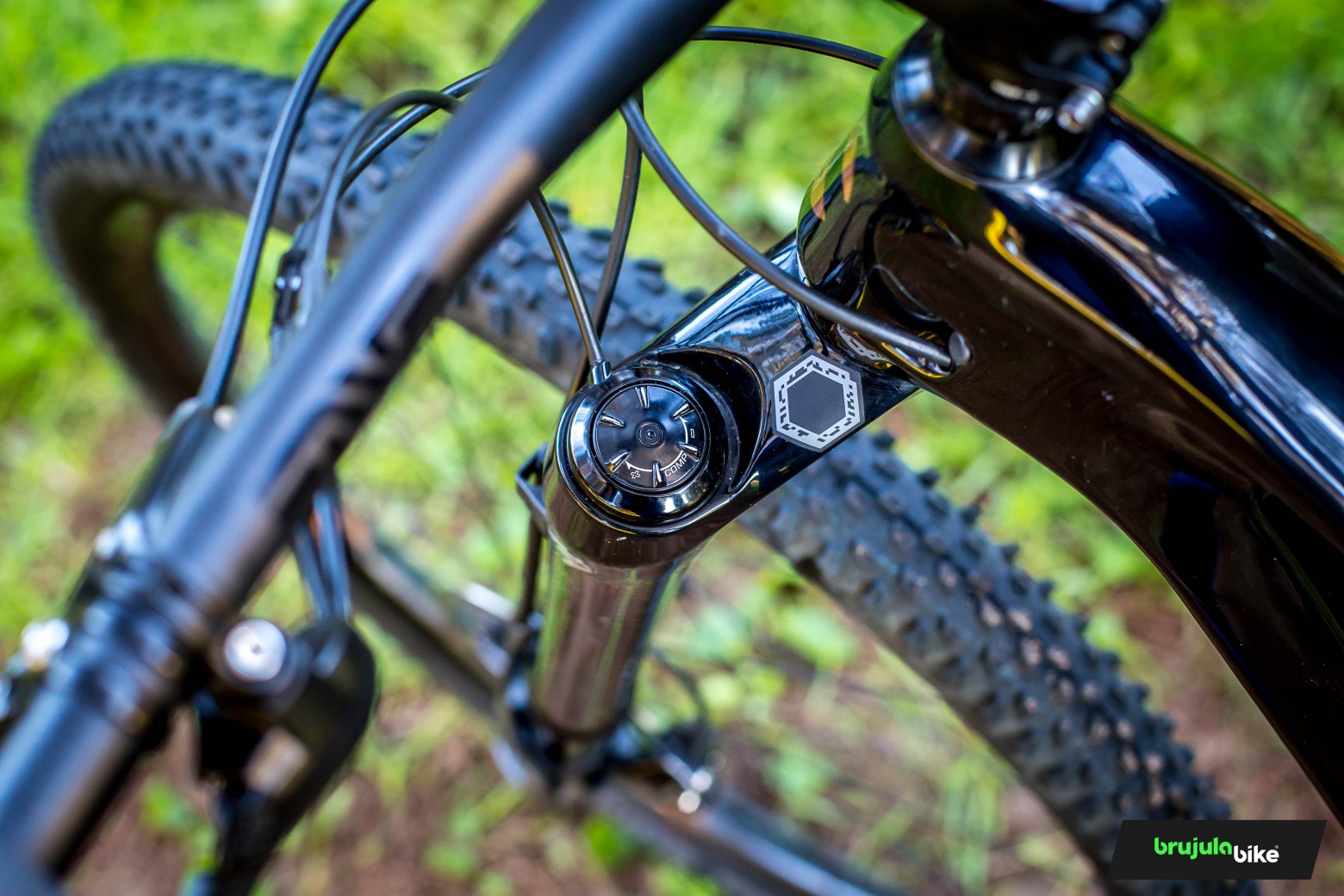 In recent months it has received an update including a quick release lever for the brake caliper that is operated without tools. Although it is not necessary to remove the wheel from the fork in case of a flat tyre, it may be necessary in order to get the bike into the car for example, and thus the task is easier than ever. 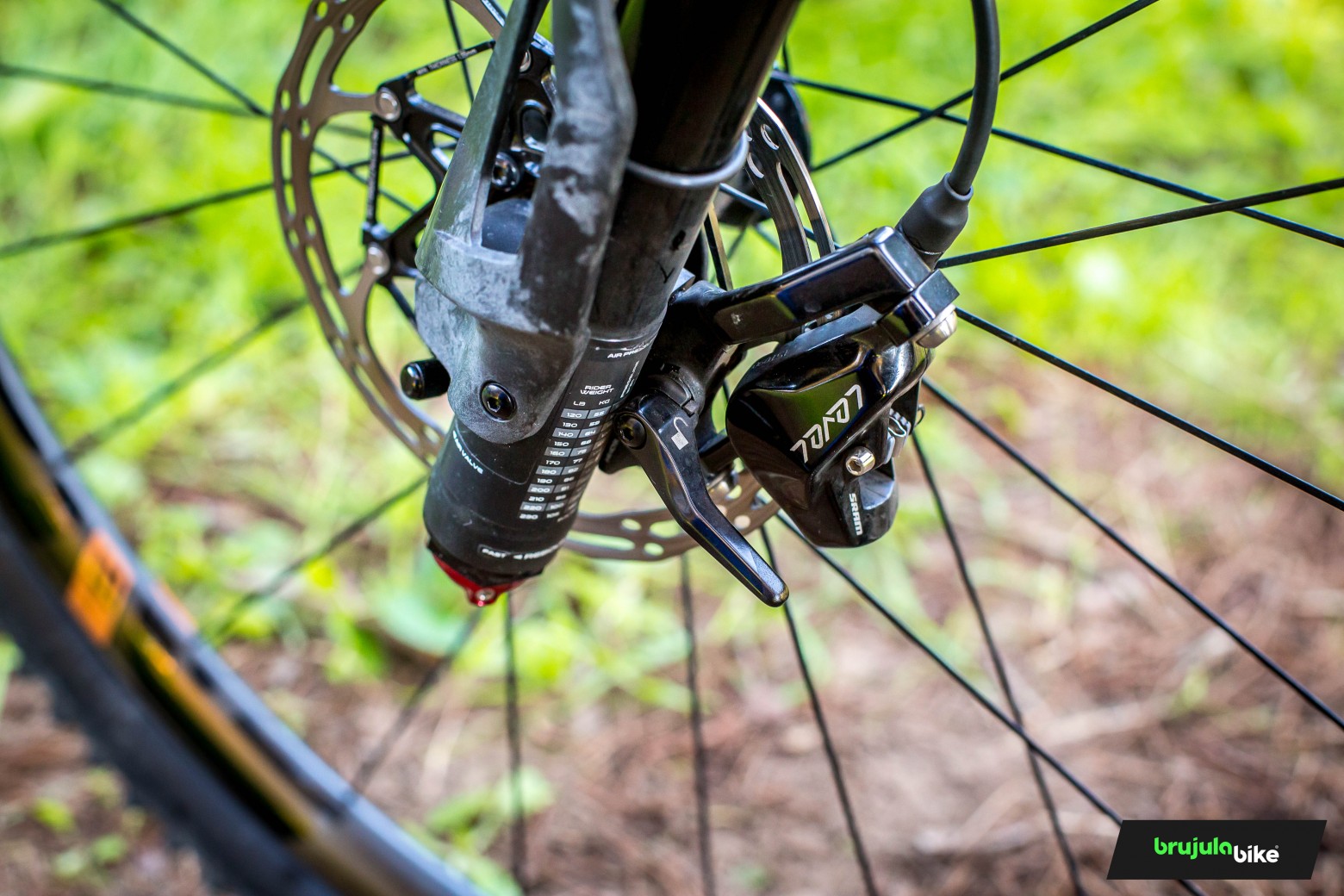 An unbeatable assembly for the Cannondale Scalpel Hi-MOD Ultimate 2021

Of course, Cannondale has put all its eggs in one basket to try and get the best bike for the moment. A brand like Enve is responsible for providing handlebars, seatposts and spectacular M525 rims. 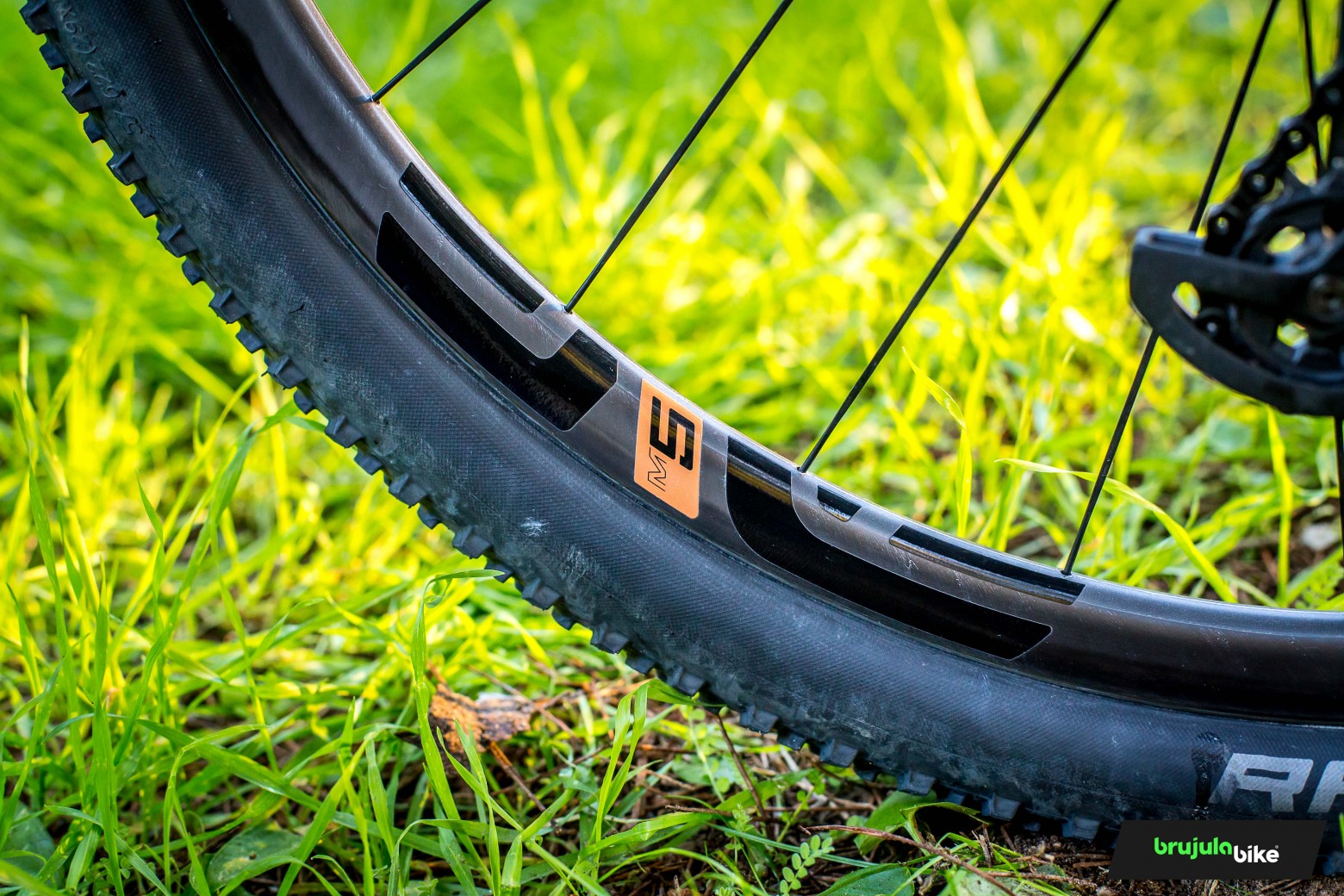 The drivetrain is carried out by the star group of the moment, SRAM XX1 Axs. This electronic and wireless unit has already been tested and works very well.

In this case it is mounted in the new Copper version and with a rear cassette 10/52. This can be a problem for some as it involves a larger jump in the large crown. Anyway it is something you end up getting used to and its higher range is an advantage. 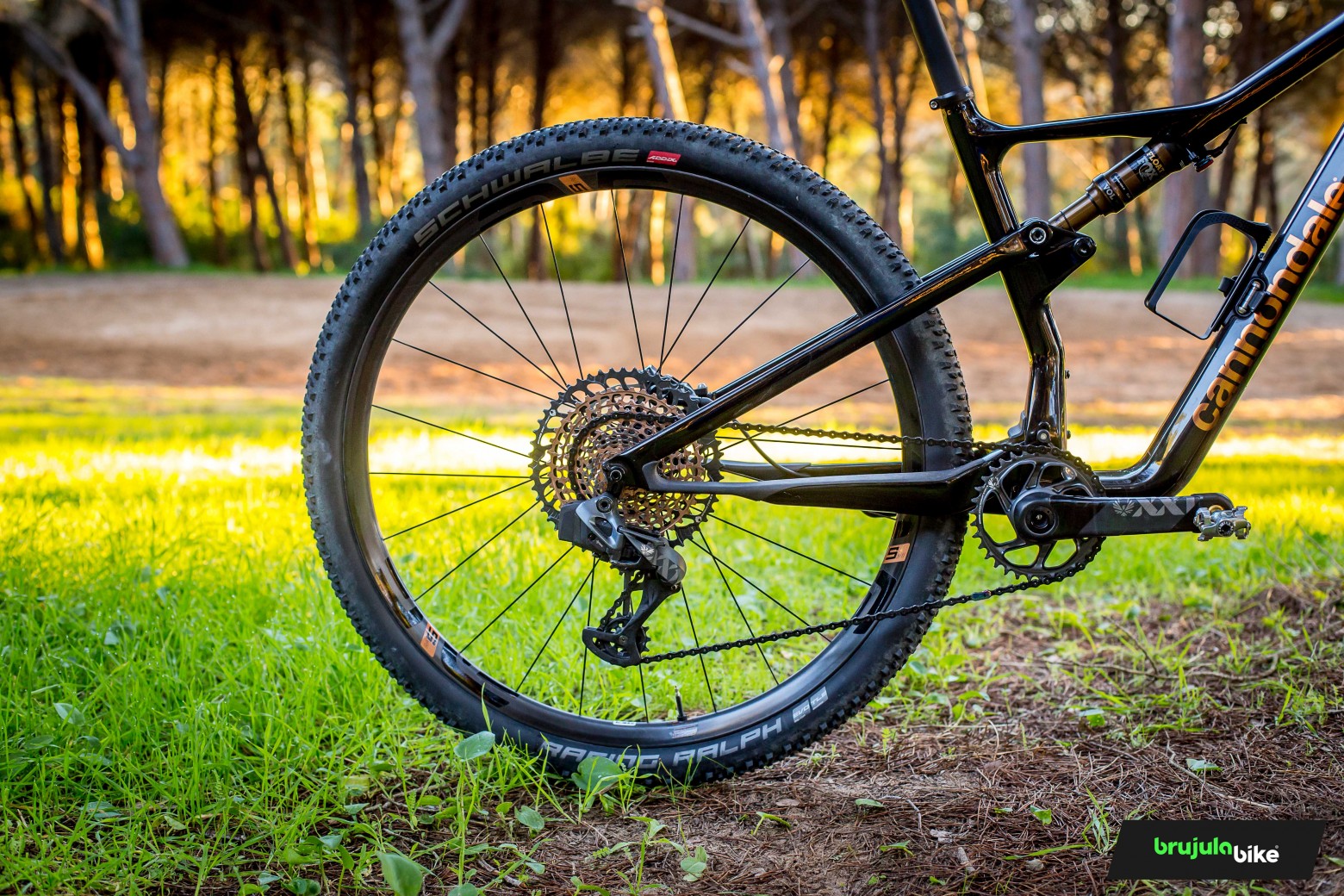 The ergonomics of the control is another component that needs some adaptation by the user, since it changes the location of the buttons with respect to the traditional control.

The braking is also entrusted to SRAM with the Level Ultimate model. They are the best XC brakes of the brand whose power-to-weight ratio is very good. We particularly like the feel of the brakes, which are very balanced. They are very clear when the pads come into contact with the disc, but they are not at all sharp and the braking is easily measured. 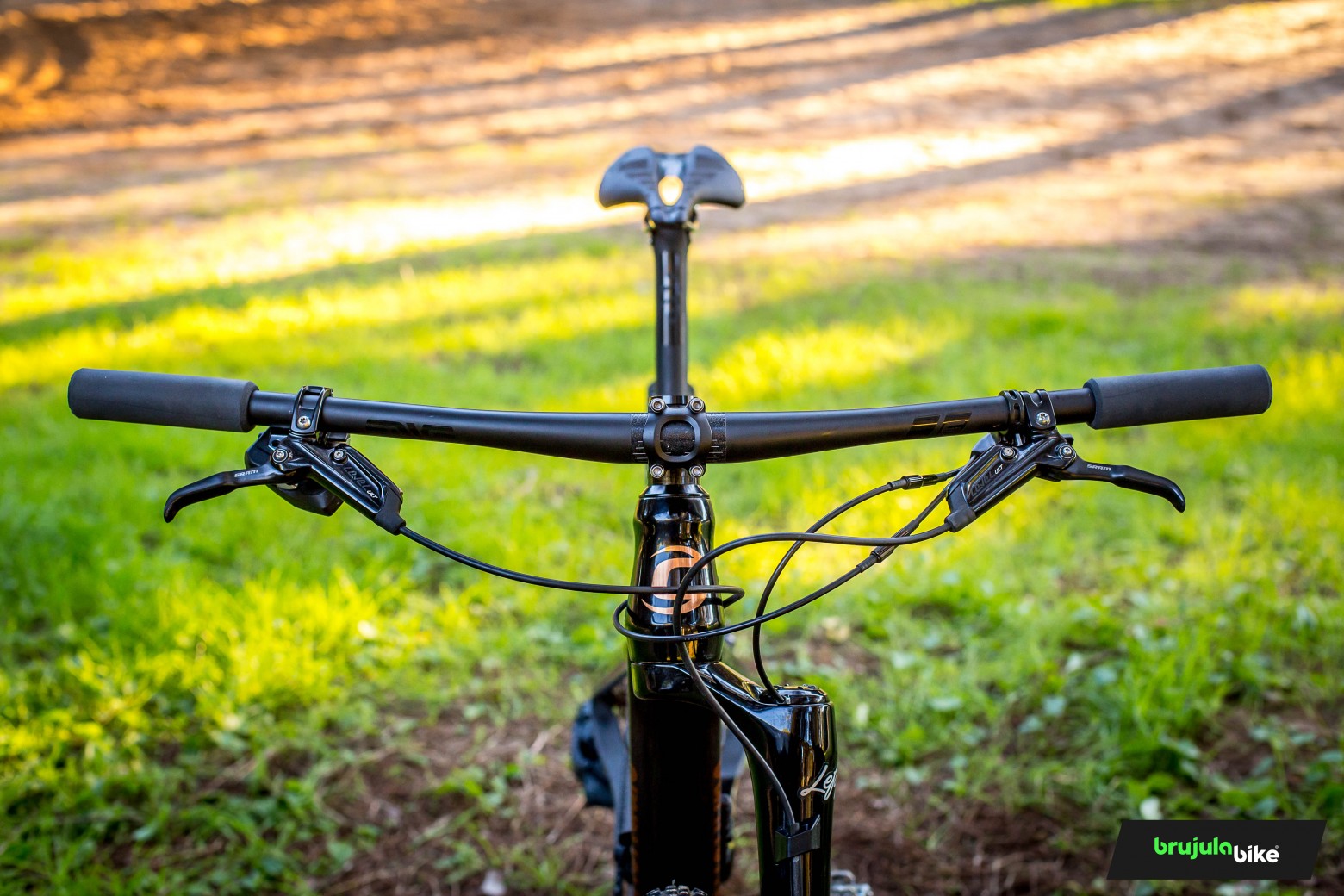 Prologo is in charge of the saddle with its model Dimension NDR CPC, a saddle that we found very comfortable. It has anti-slip panels on its surface that work very well. 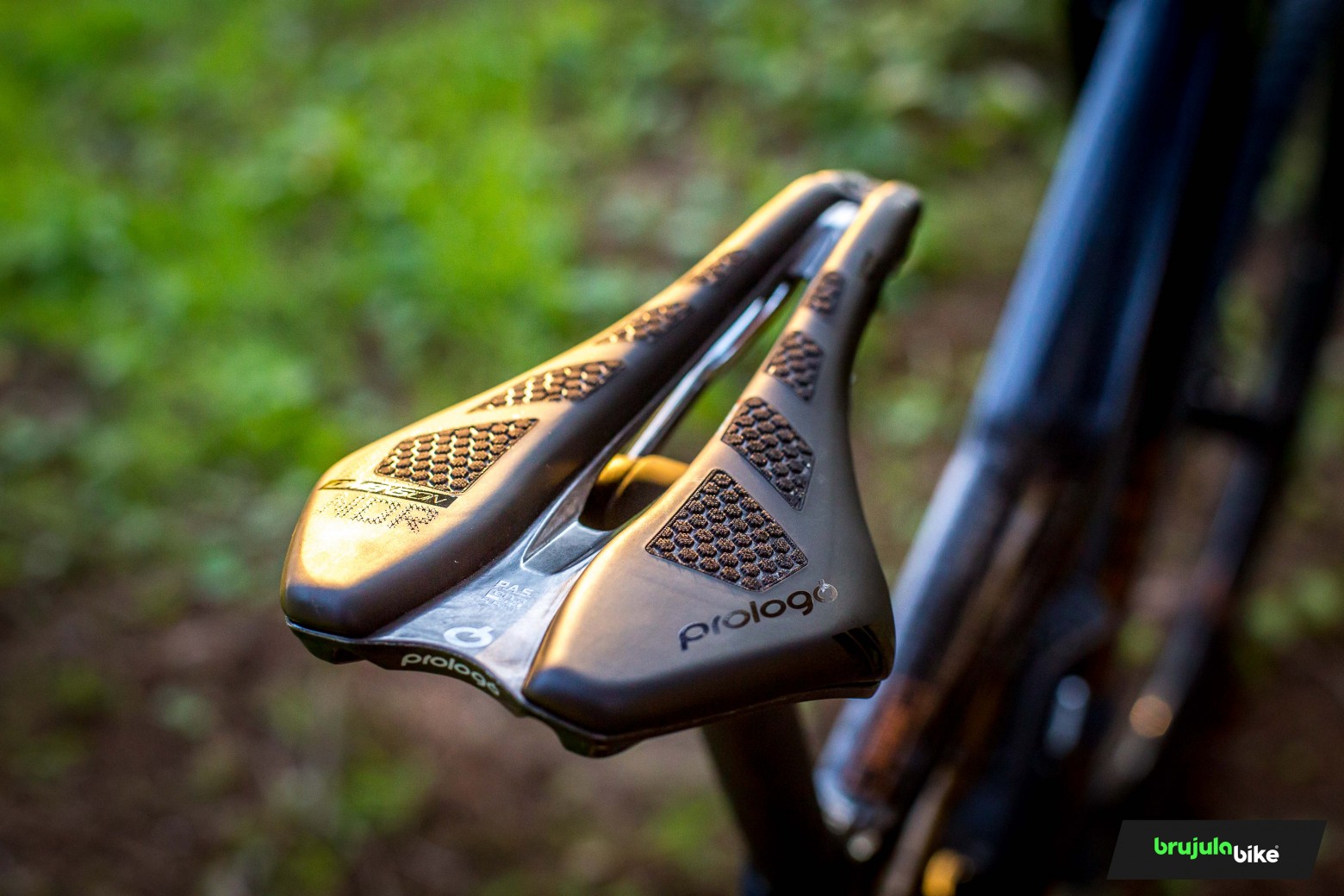 To finish with the assembly we will talk about the tyres. It mounts the Schwalbe Racing Ray and Racing Ralph models with the EVO SnakeSkin casing.

We liked their behaviour, taking into account that they are mainly rollers, but lately we have become used to tyres with a little more ball on XC bikes and, despite being 2.25" we would not have minded having a little more real ball. 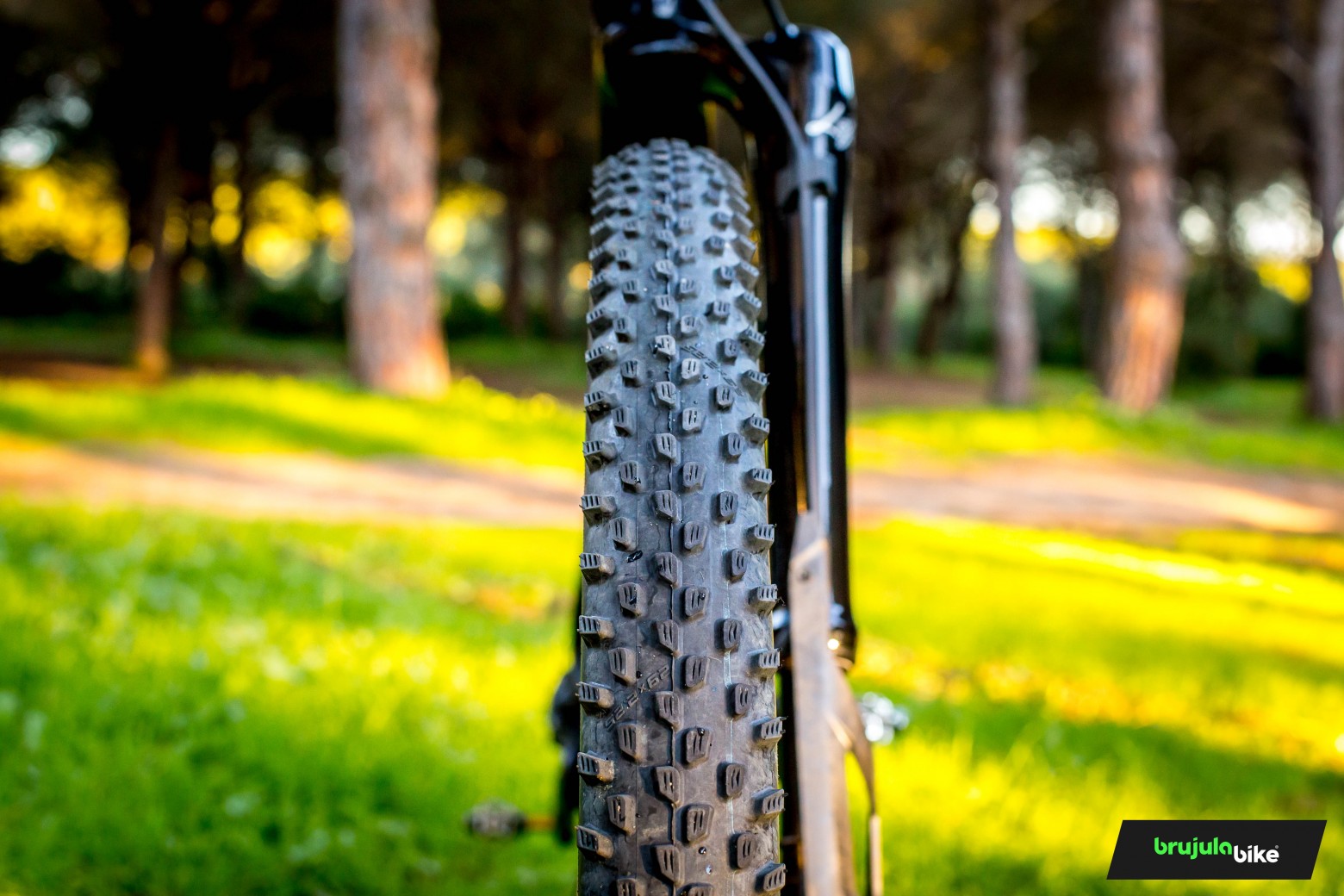 From the moment you ride the Cannondale Scalpel Hi-MOD Ultimate you feel something special, one of the best World Cup bikes under your feet. 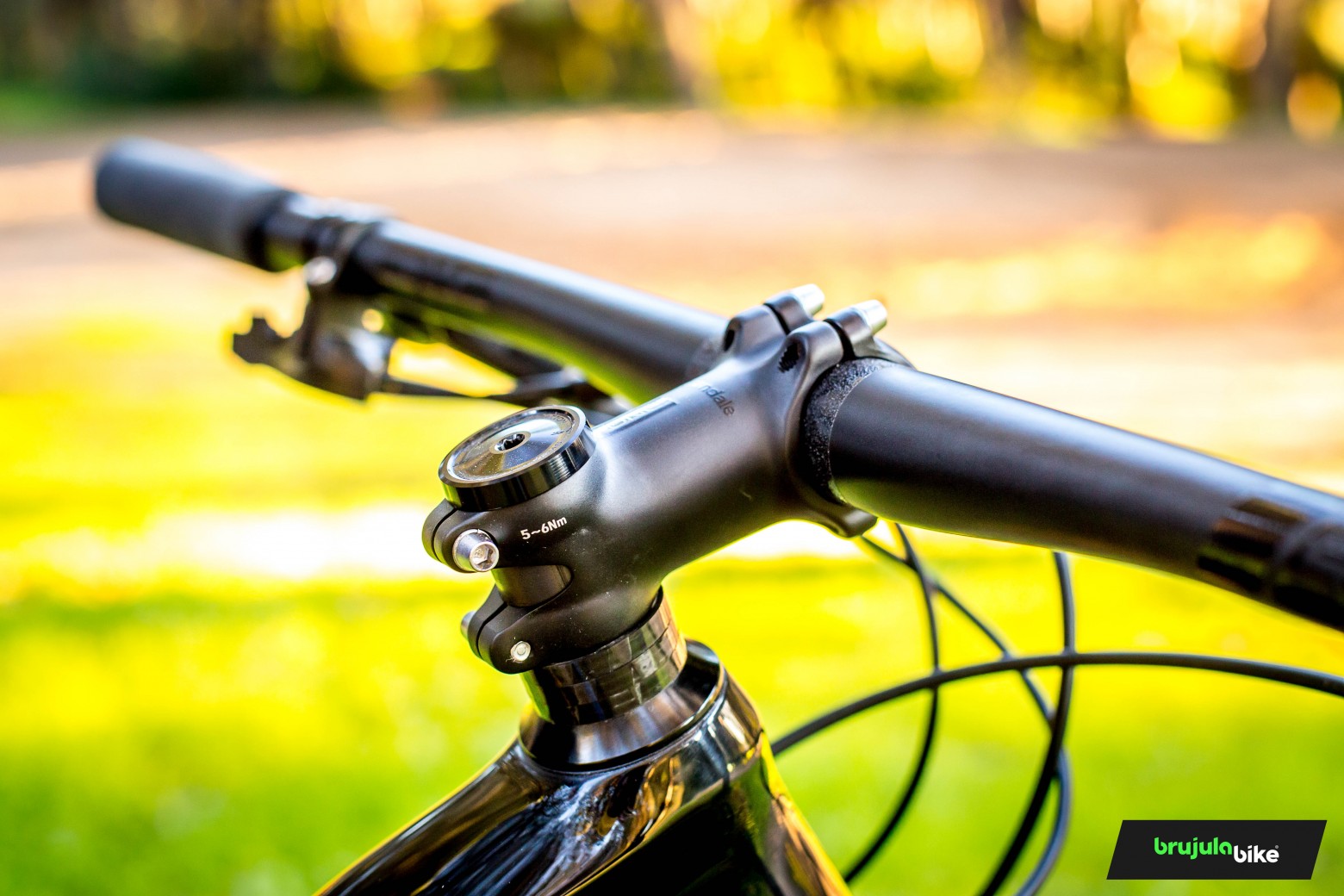 It is striking that the position on the bike is not forced at all. Gone are the days when getting on a racing bike meant being uncomfortable. In fact, it goes quite straight, and that is despite the fact that the reach has been increasing in recent years (in this case about 10mm from the previous Scalpel, depending on size), the stems have also been shortened even more.

We have also been getting used to wider and wider handlebars and with the Enve M5 carbon mounted on the Scalpel with its 76 centimetres we have been very comfortable. 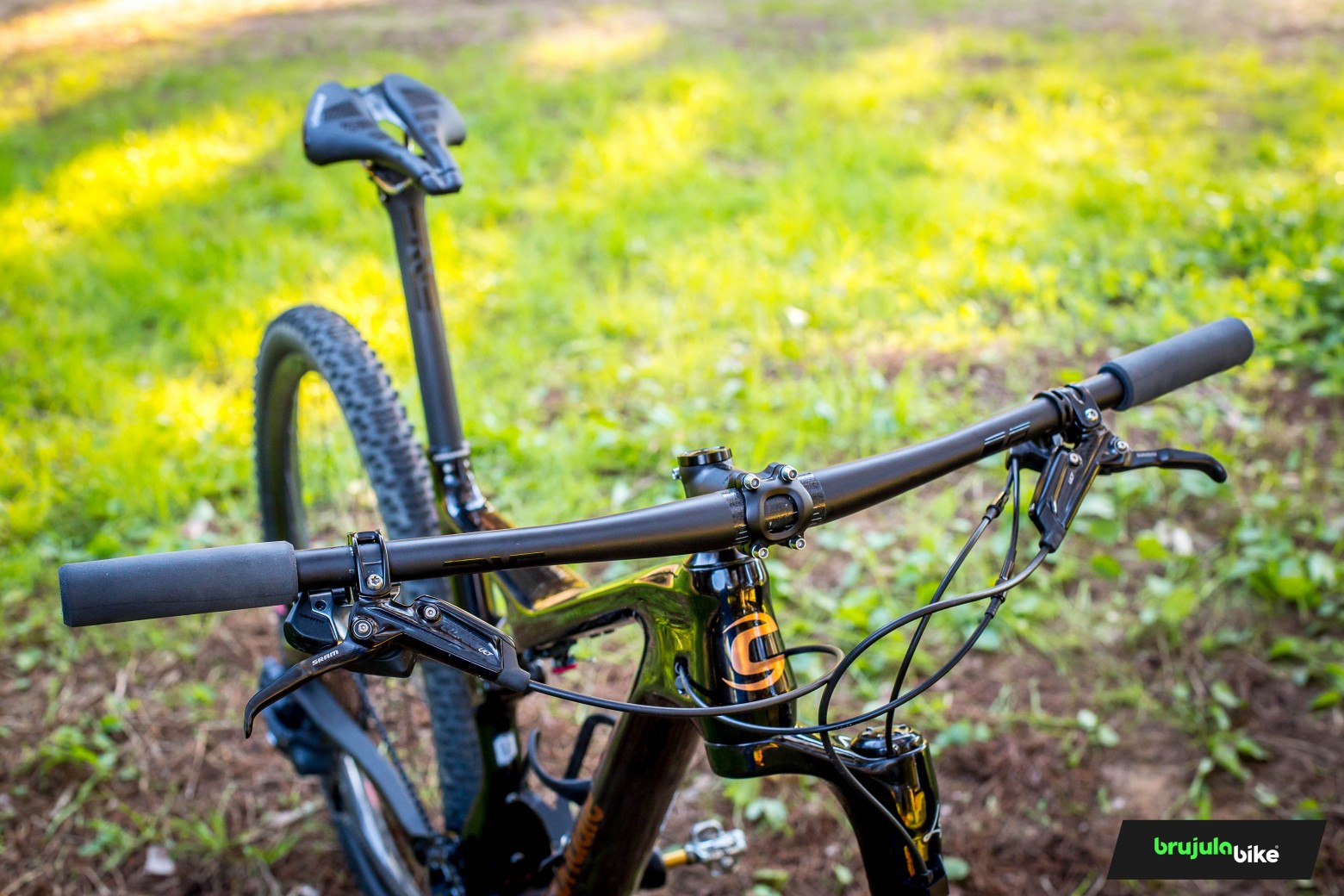 The Esi Grips Chunky also play in favour of comfort, we think it's a good idea because while giving a good grip, provide a plus of absorption compared to the lock on type grips that are usually mounted as standard on most bikes today.

After adjusting the sag of both suspensions we start to ride and the sensation that the bike offers us in the first meters is of a very compact bike and a little harder than expected. Clearly we are on a racing bike and if we stick to the 25% sag recommended by Cannondale the suspensions feel quite firm. 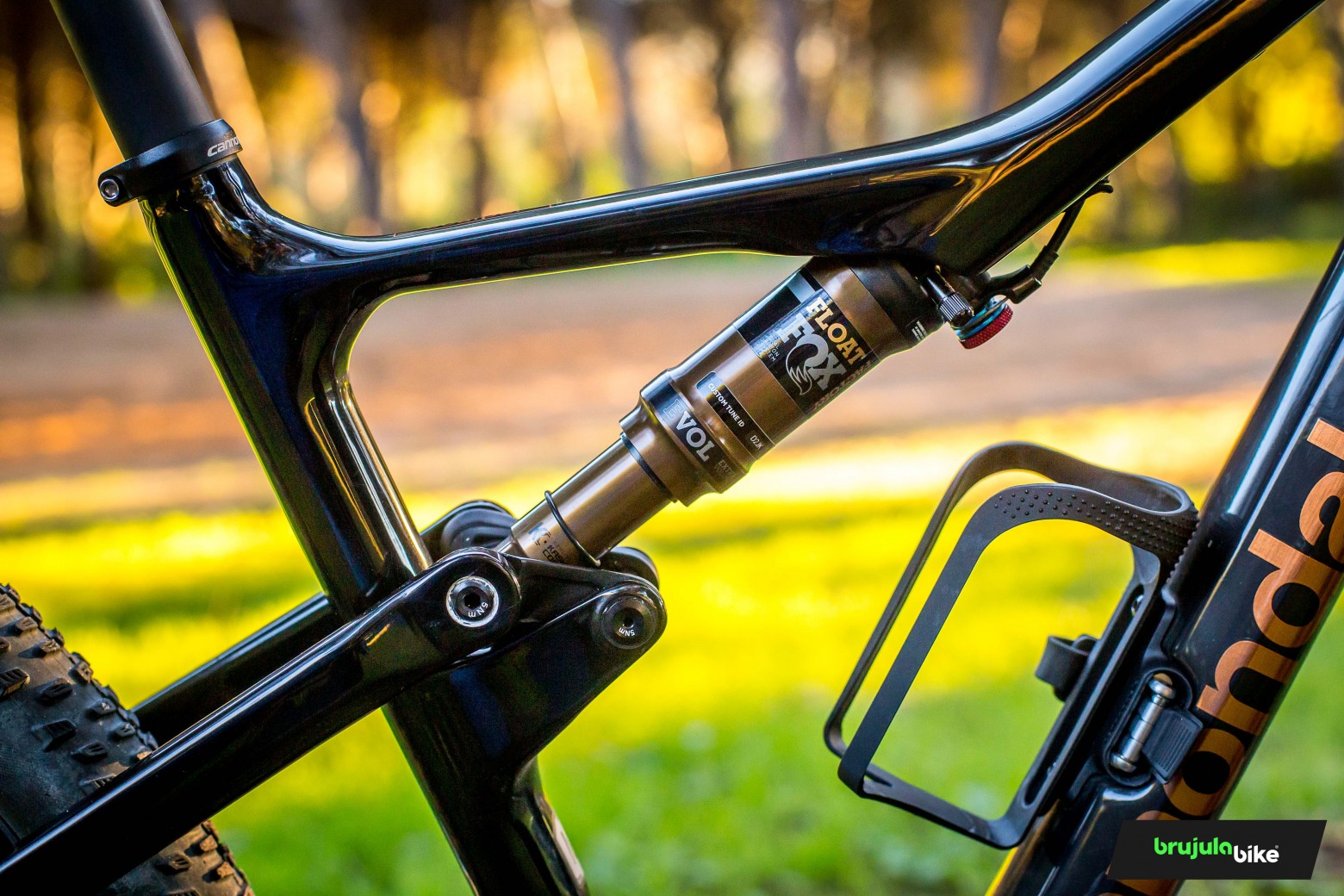 The Lefty 8 has a pressure table next to the brake caliper, but in our case we had to put something less than indicated to have the proper sag and hardness. It has a quite progressive feel like the rear one. Both suspensions have a similar touch and you can see that they fit perfectly. 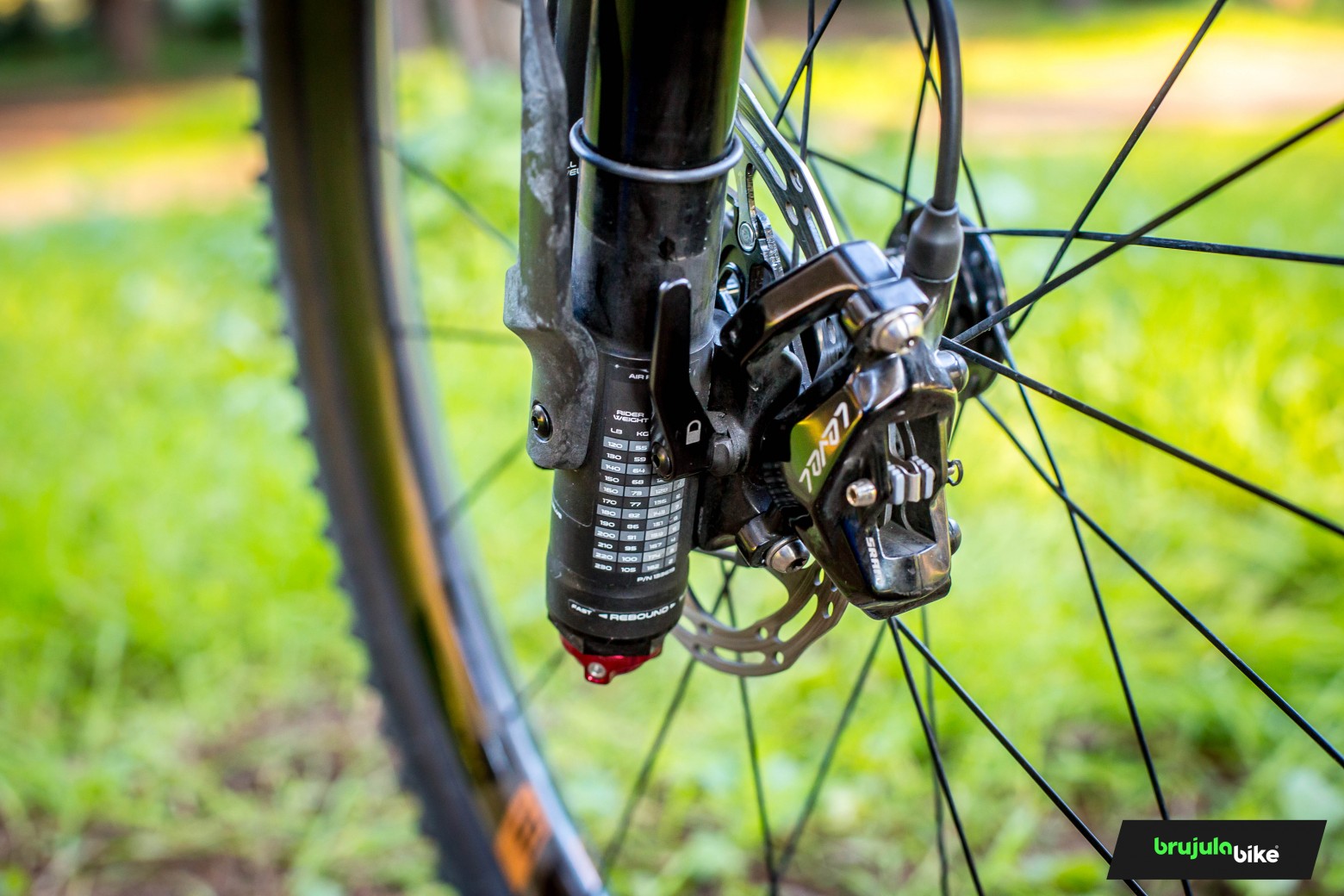 The remote control of the suspensions has only two positions. On the first day of the test we missed a little bit an intermediate position because on tracks with good road surface you could notice a little more interaction between the pedalling and the suspension than you wanted. But that day we had a little more than the recommended sag. Once the shock is at the right pressure the sensation of movement when pedalling is minimal and when the terrain is favourable we use the block and on this bike we talk about a real block. 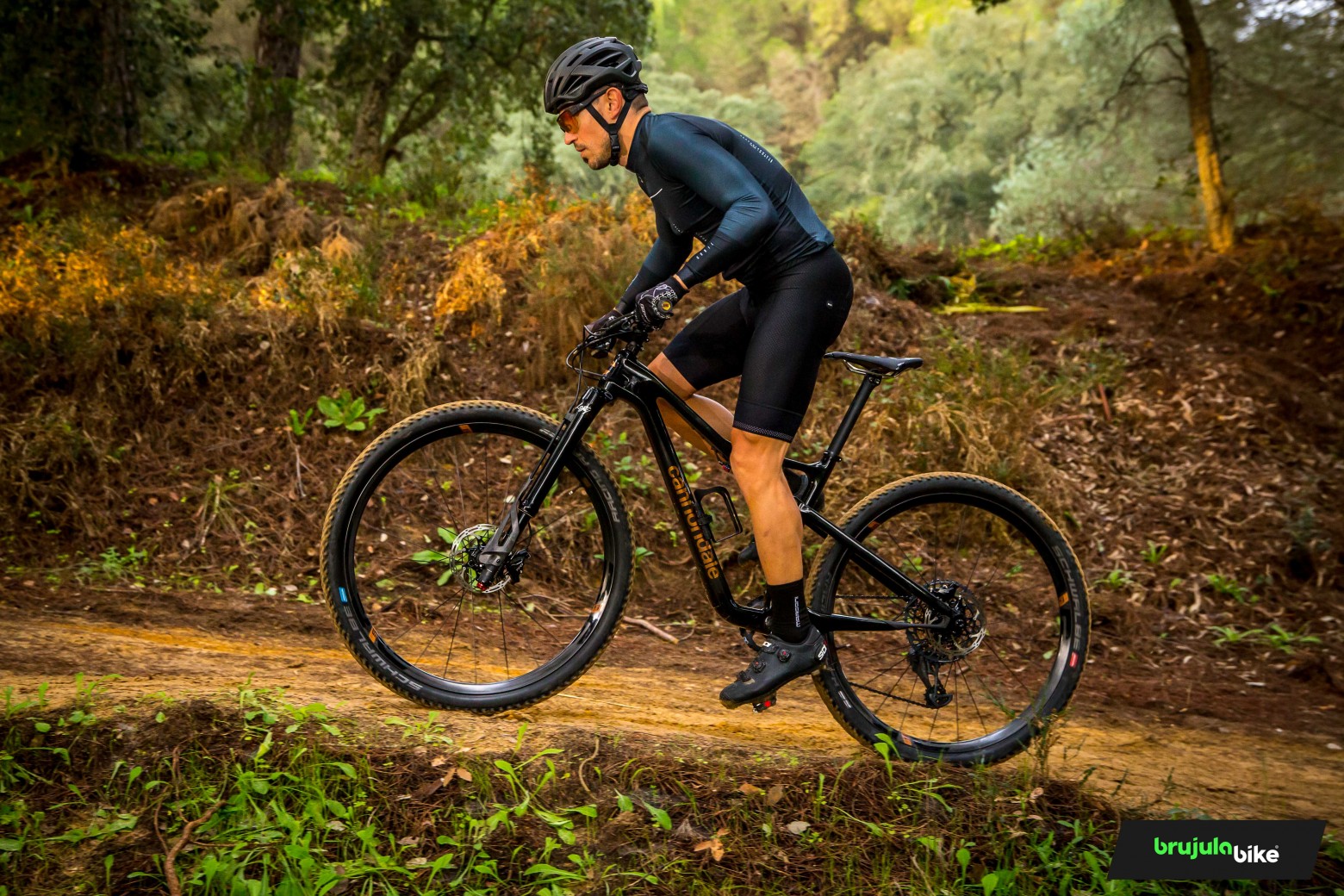 When you climb with a good surface and the lock is activated, you will notice an exceptional rigidity, even if you squirm on the pedals you will not notice any undesired bending.

On technical climbs the bike feels light and agile. And in these situations you realize that the combination of the relaxed steering angle and the very pronounced offset of the fork really works. Despite having the wheel so far forward the steering feels very manageable and the bike has enough nerve to make it easy for you to get through any obstacle.

It is also in these types of bumpy uphills that the virtues of its suspension system come to the fore. The traction on this bike is truly amazing, keeping the wheel in contact with the ground at all times. 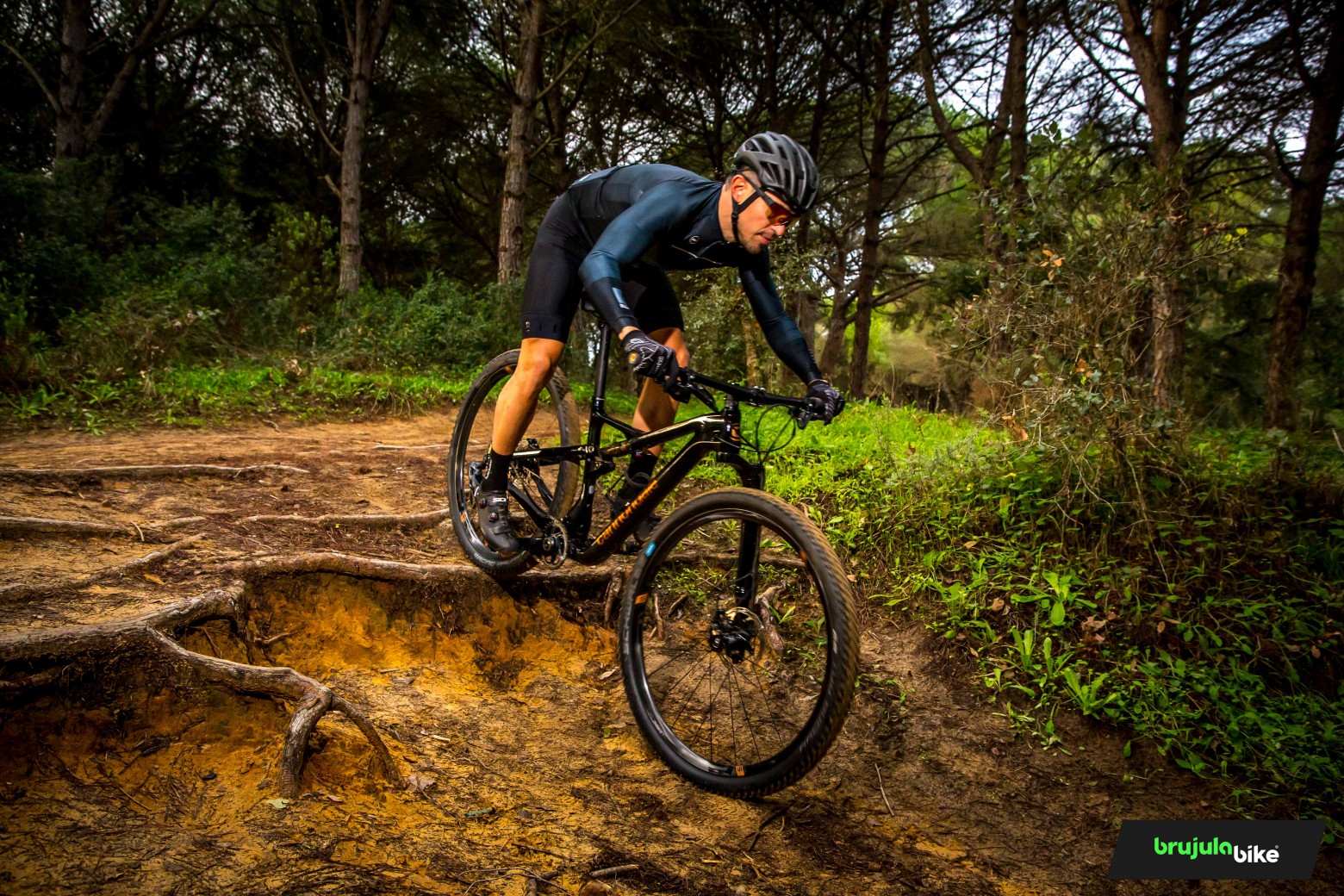 And what about the descents? Well, the more technical and complicated the better the Scalpel responds. The progressive feel of its suspension gives it the capacity to absorb the strongest impacts, but we have missed a telescopic seatpost that gives us that extra safety in the areas of greatest slope.

The centre of gravity is quite low and its wheelbase gives it great stability, plus the fact that the front wheel is so far forward gives you a lot of confidence when going downhill.

It's good to get into the technical tracks with this bike and face those complicated paths that test your abilities, because with the Cannondale Scalpel Hi-MOD Ultimate you play with advantage.

After the days we have enjoyed with the Cannondale Scalpel, we can see that it has been designed taking into account the demands of today's World Cup circuits. Nowadays a XCO bike has to be more versatile than ever and give confidence in downhills and technical tracks like the rock gardens that are so fashionable. And the Cannondale Scalpel is more than capable of meeting these requirements. 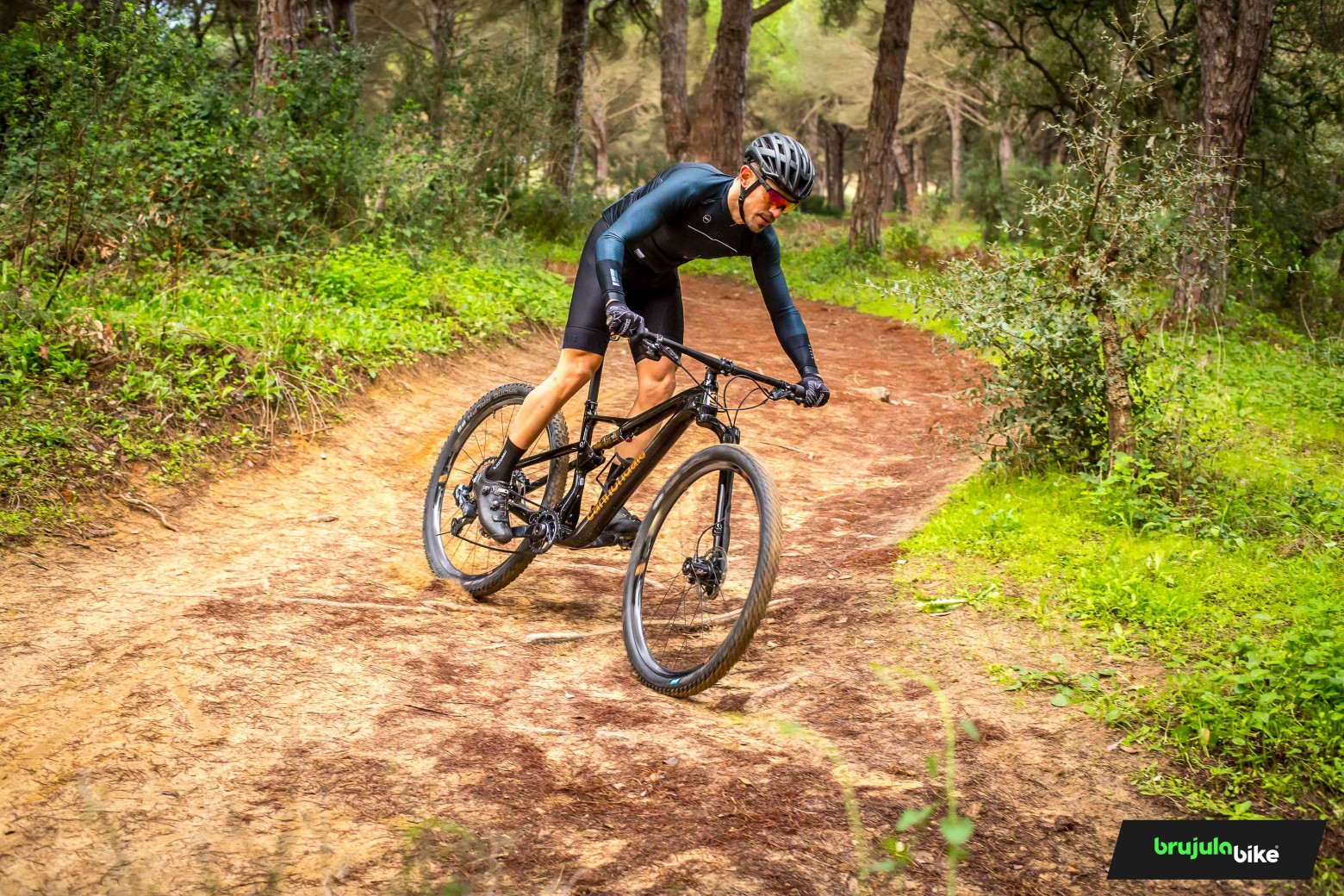 And although its natural terrain is the circuits, it is also comfortable to face long distances so that, whether in marathons or non-competitive routes, the Scalpel provides a performance bonus. Although in this case the rider does miss an intermediate position on the locking control.

The only thing we would add is a telescopic seatpost and, taking into account the high price it has, it would not be out of place to bring a potentiometer as standard as some of its direct competitors.

In short, the cyclist who seeks a full suspension simply for the sake of comfort may have other options on the market more successful than this Scalpel, but if you do not conceive the MTB otherwise than with the knife between the teeth, either with a dorsal or without it, this is your bike.