We test the Lefty Ocho Carbon 120, more travel and better performance for the new MTB

Brand new. We had the chance to test the long-awaited 120mm version of Cannondale's revolutionary Lefty Ocho fork. It claims more travel, more stiffness and more smoothness, but can it match the outstanding performance of the 100mm version? Let's find out. 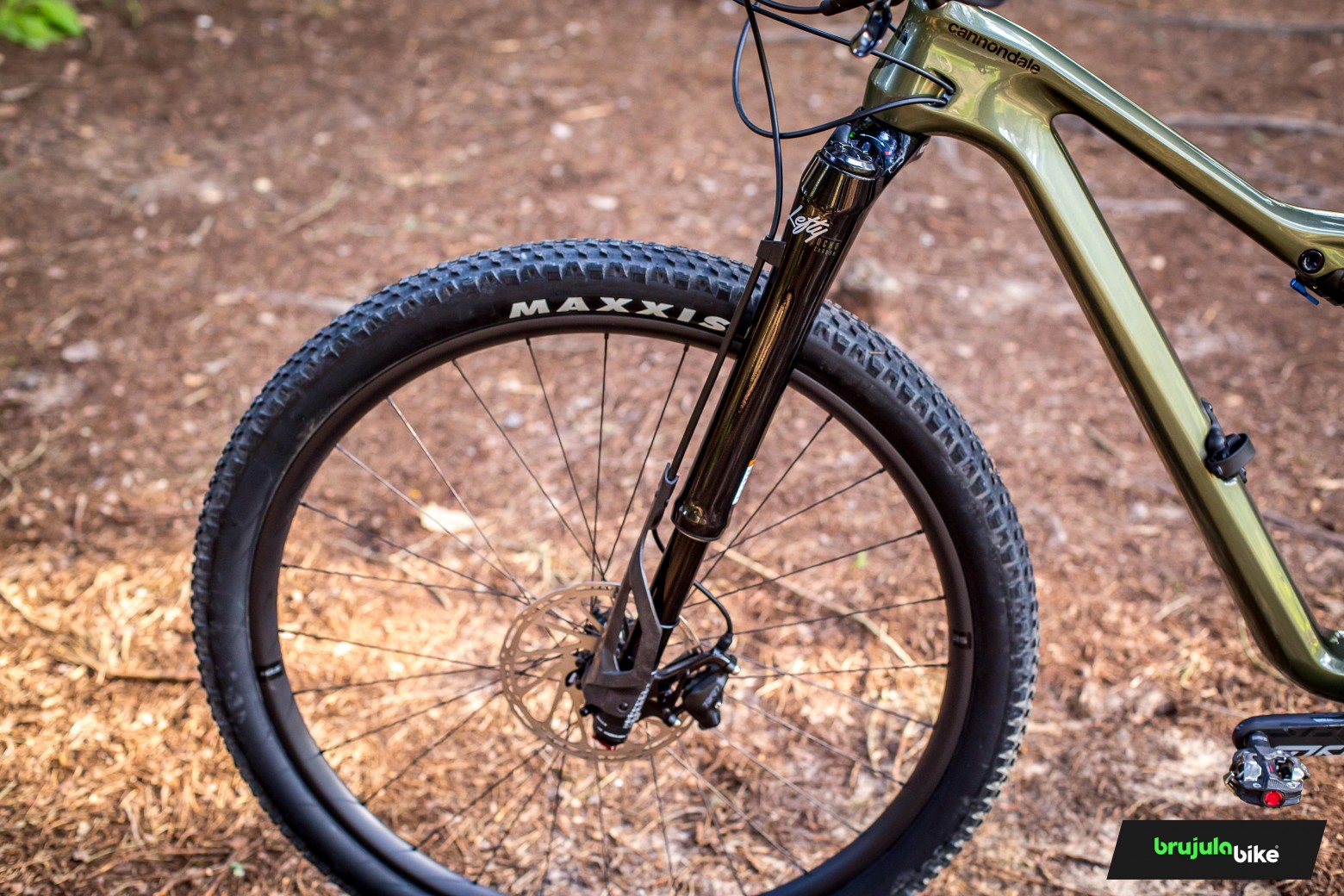 The first thing to note is that the new Lefty Ocho Carbon 120 is not a 100mm Lefty Ocho with a couple of adjustments. Although aesthetically they look identical, this is a different fork. Cannondale has built it from scratch by increasing the tube thicknesses to handle the increased leverage and twisting that comes with the increased travel without the increased flex. 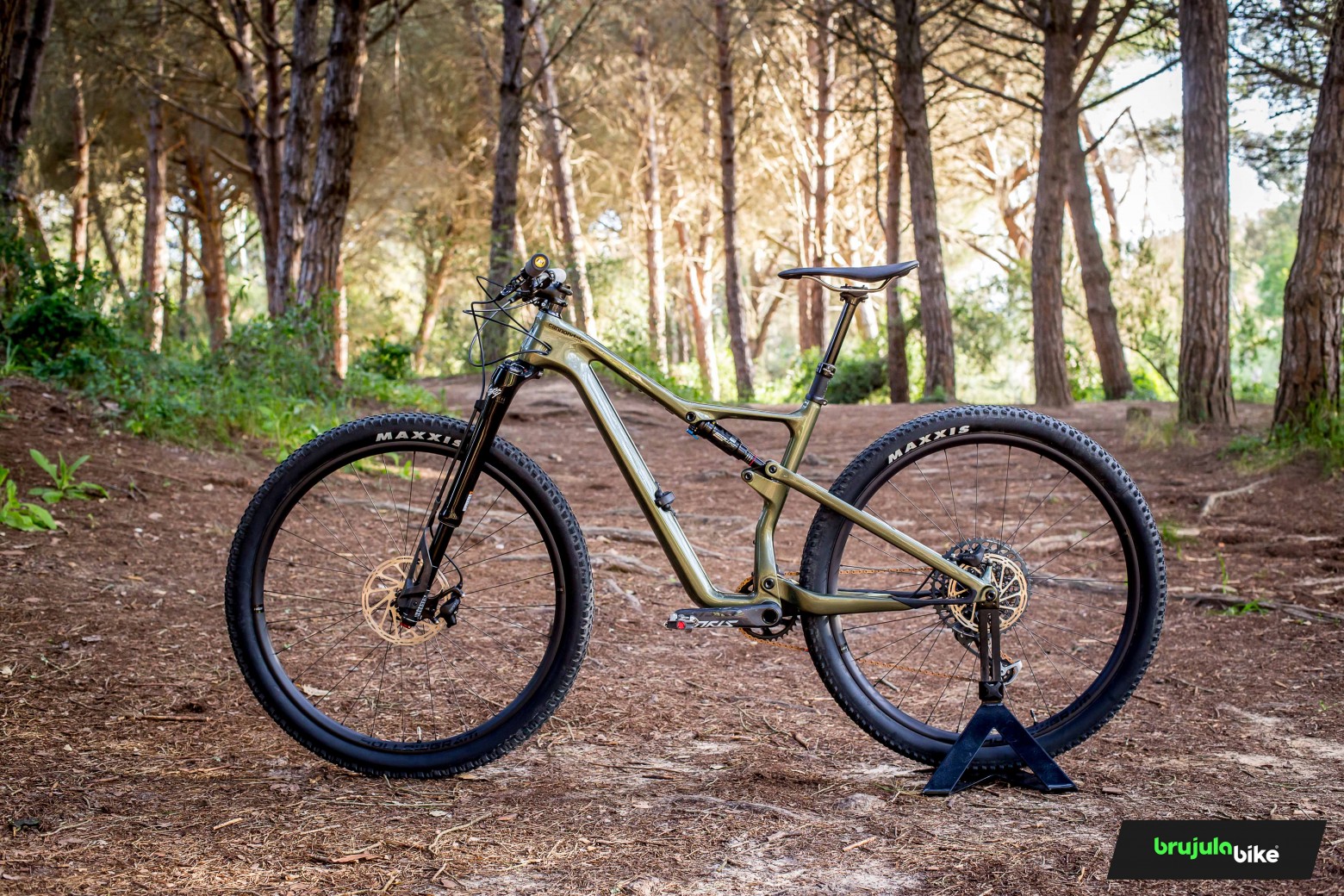 Cannondale claims that this fork offers more travel, more stiffness and more smoothness. In fact, they claim it's the smoothest-performing fork ever made and the stiffest among lightweight forks.

Its smoothness is due to its design based on needle roller bearings instead of plain bearings. In the Lefty Ocho, these bearings are arranged in a delta shape, i.e. three-sided instead of four-sided as in previous versions. The bearing sliding system ensures a smooth and uniform behaviour in any situation, whether we are braking or in a succession of impacts, the smoothness of operation will still be there. 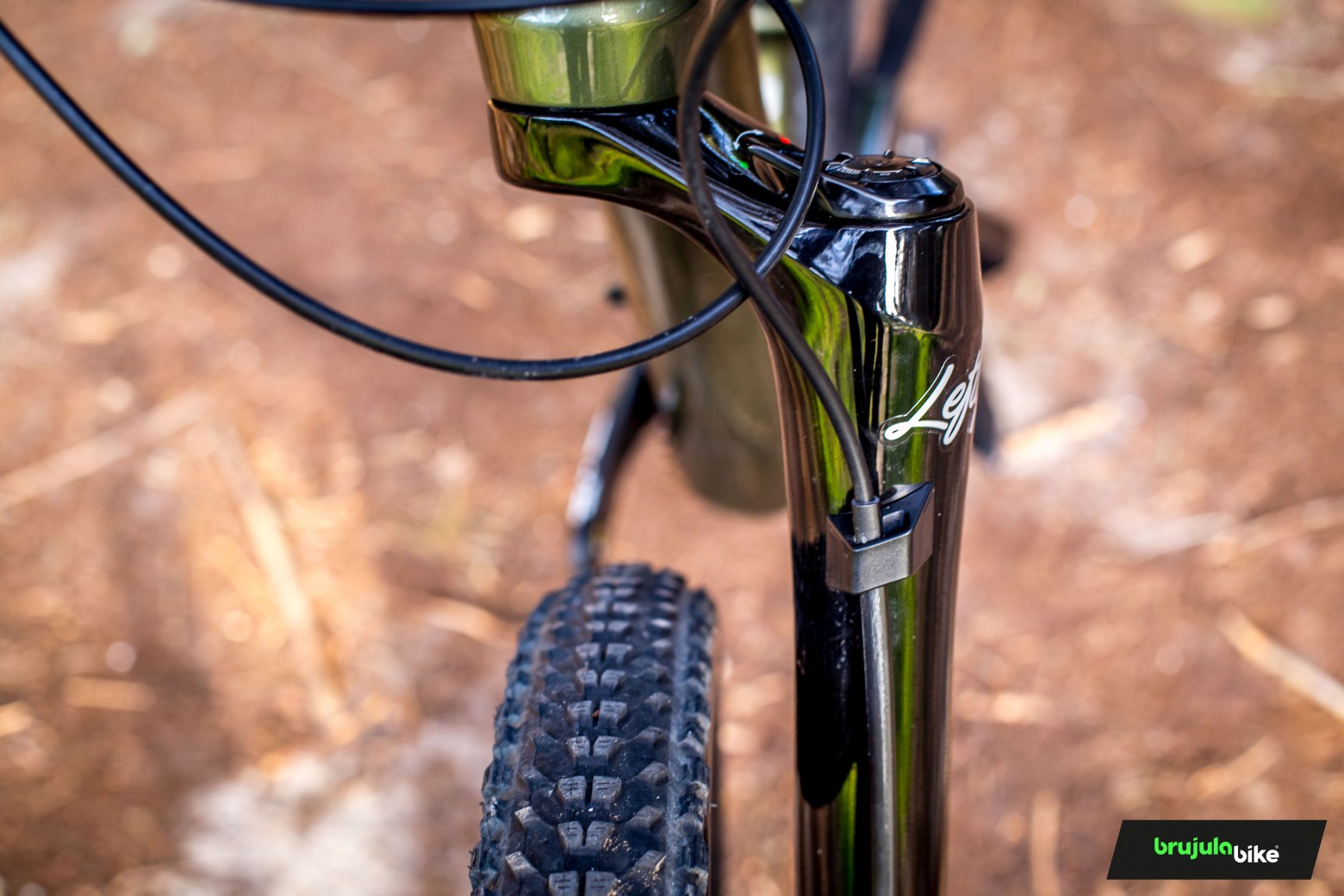 The precise amount of material has been adjusted in the necessary areas to provide stiffness where it is needed and some flexibility where it is beneficial.

And despite the announced increase in travel and stiffness, the fork remains at a magnificent 1550 grams.

Another interesting detail is that being an inverted fork, and even more so having a single bar, the non-suspended mass is very small, so that certain inertias are greatly reduced during operation, improving its behaviour in repeated high frequency impacts. 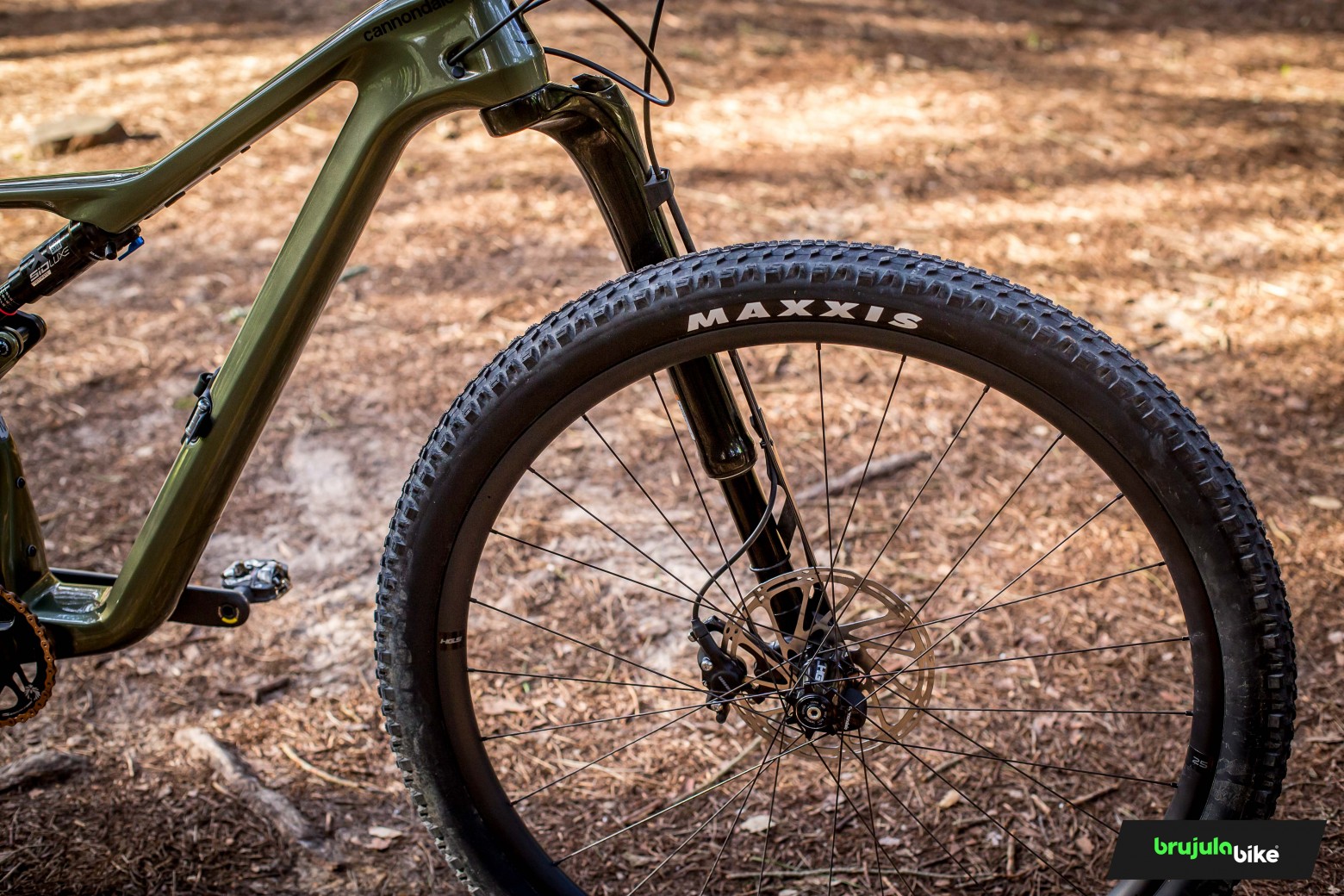 Due to the increased travel, the inner tube has been redesigned to offer a progressive curve accordingly. In addition, this progressivity curve can be varied by using volume spacers.

Cannondale claims that this frame also supports 110mm of travel.

The brake caliper mount has a quick release mechanism that simply releases the brake caliper completely if we want to remove the wheel (which on this fork comes out sideways), although it is not necessary to repair a flat tyre, but if, for example, we need to get the bike into a car, the wheel can be removed very quickly. 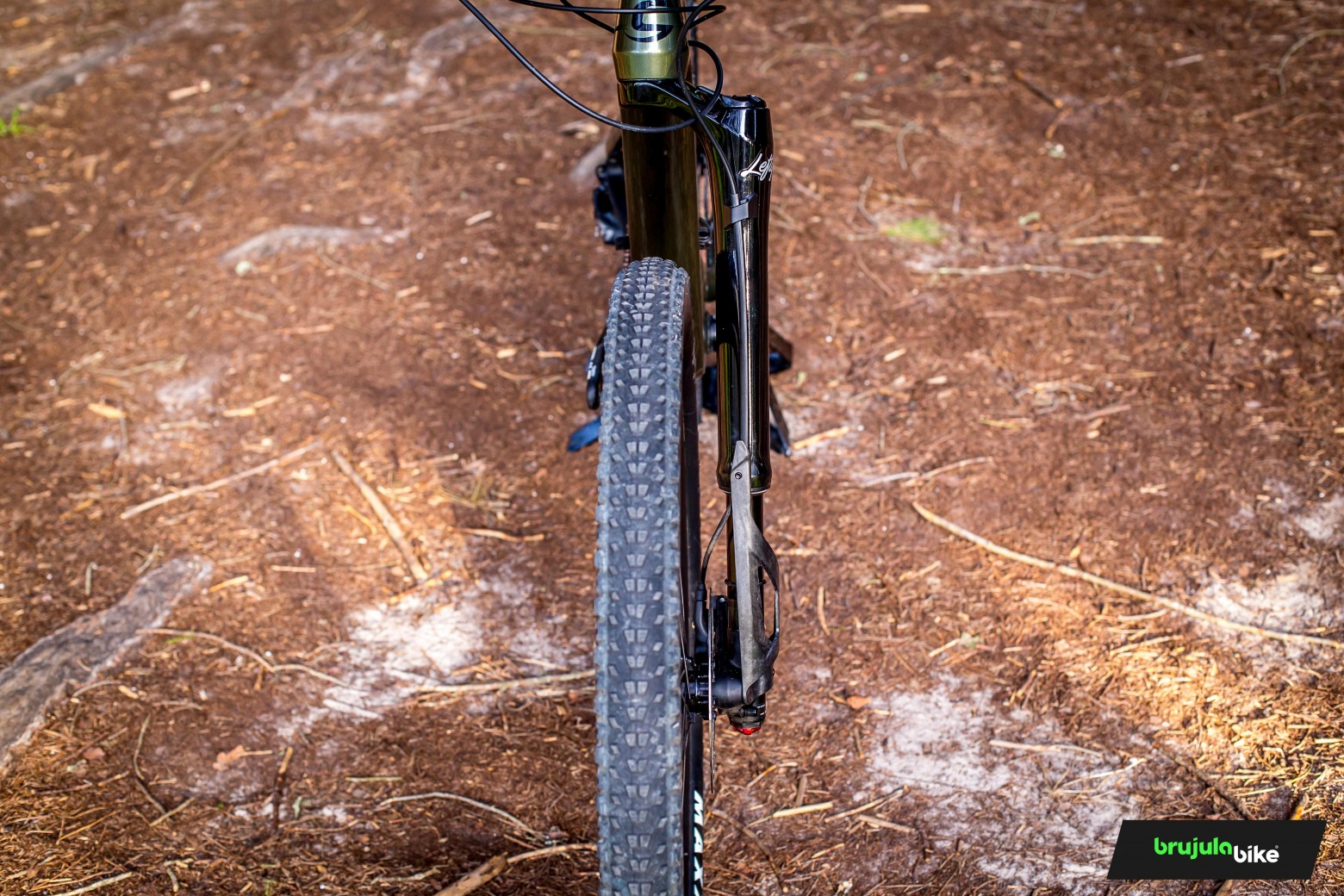 Another distinctive detail is the mounting of the lockout on the fork crown instead of a remote lockout, although it is compatible with it. They do it this way to simplify, eliminating a control considering that the bikes that mount this Lefty normally mount a telescopic seatpost with its corresponding control on the handlebar.

And after all this information, it is time to see for ourselves what all these advertised qualities translate into.

We received our fork mounted on a brand new Cannondale Scalpel SE LTD and after the pertinent adjustments in terms of measurements and position of the controls we moved on to the adjustment of the suspension. This adjustment is made much easier thanks to the sag indications printed on the inside of the carbon protector that covers the lower link. There is also a pressure table on the lower part of the fork, but we ended up using the sag as the recommended pressure left the fork too hard. 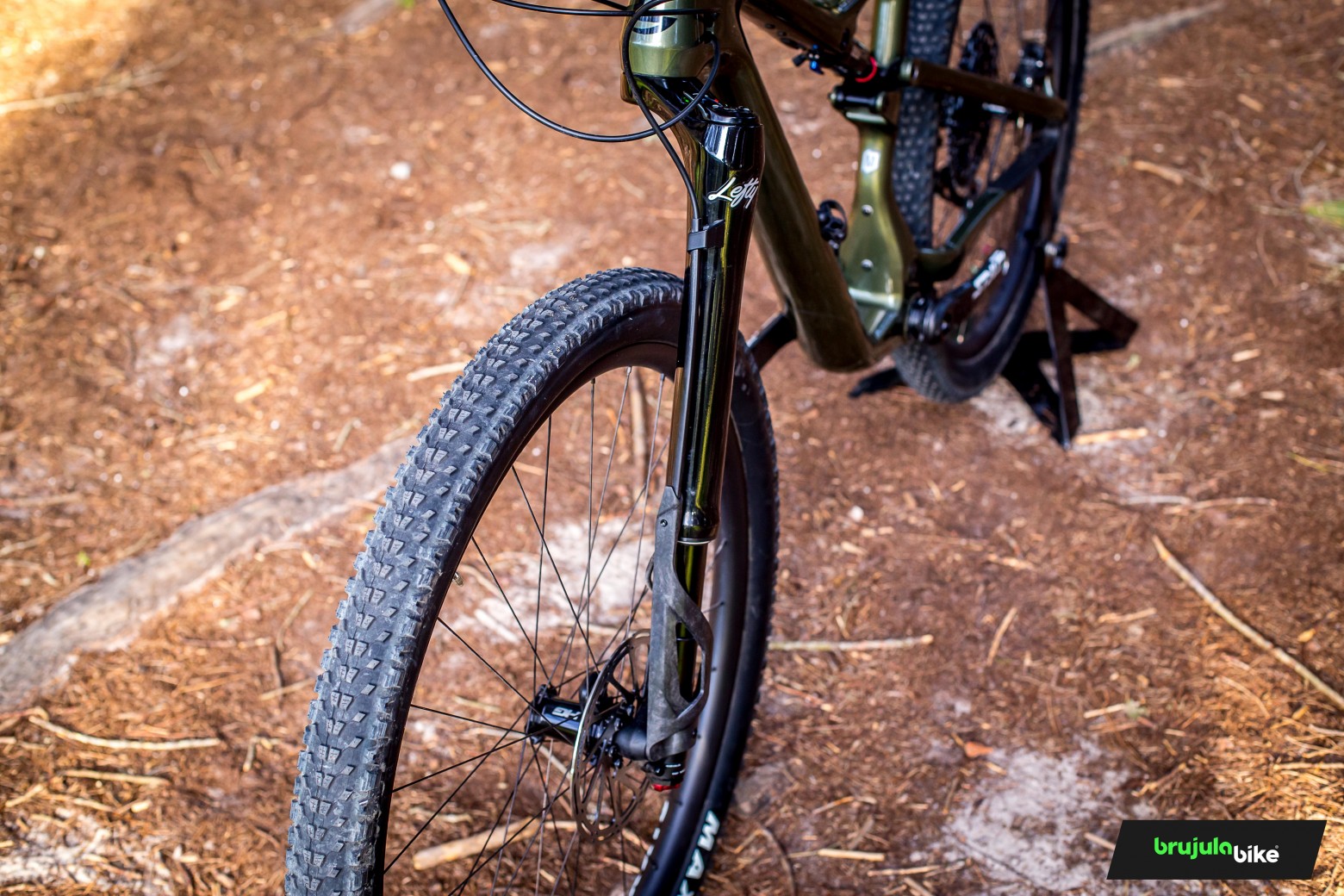 As we tested the Lefty at a standstill it felt a bit too soft for us and we had to use the suspension pump. But when we checked the sag beforehand to get a starting point we found that we were around 23-25% sag.

After several checks and tests we came to the conclusion that the extraordinary smoothness and sensitivity of this fork makes it seem that it is too soft, but this is not the case. 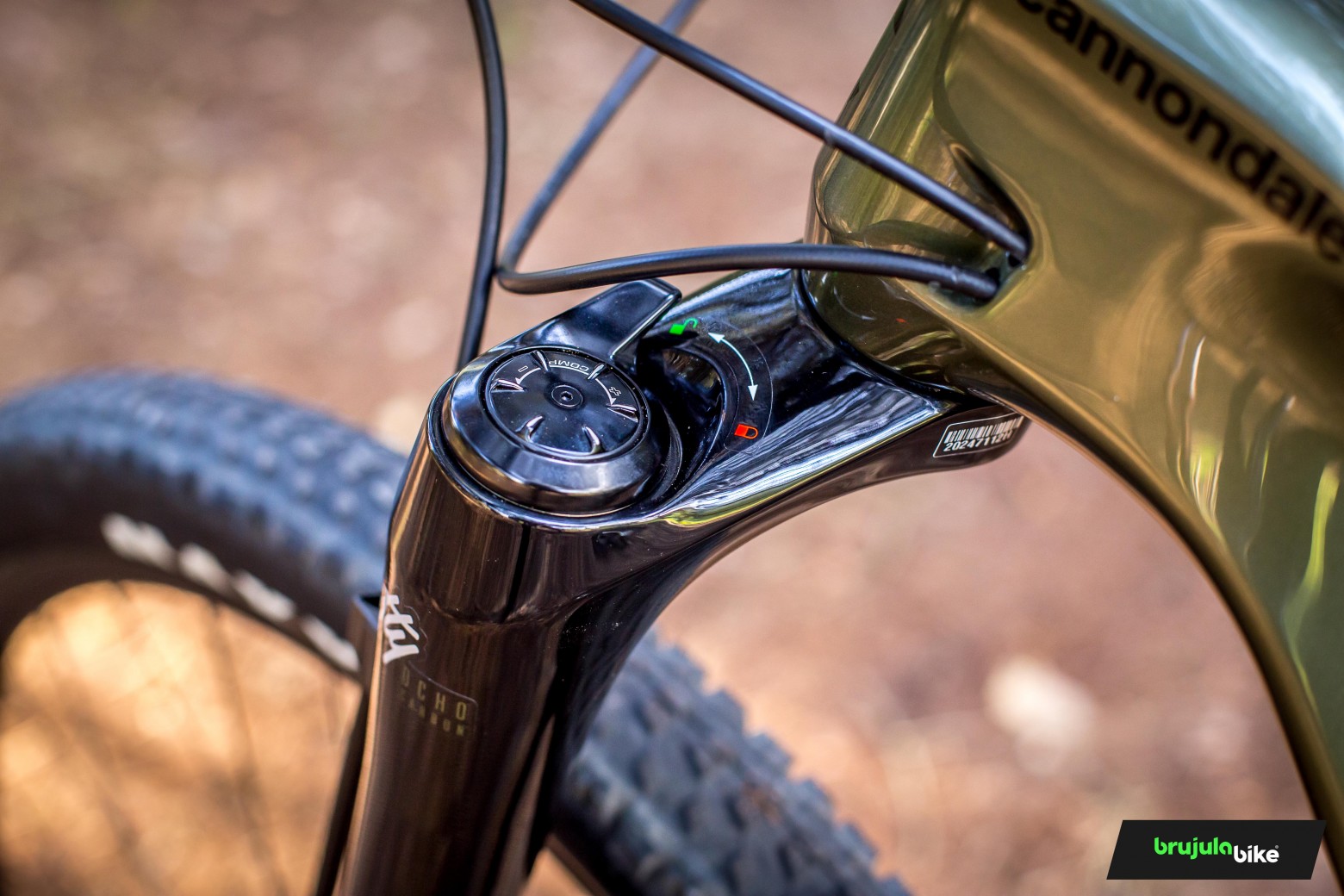 The settings on the Lefty are really simple, which we think is a good thing for the average user. Apart from the air preload valve, there is a dial at the bottom to adjust the rebound which offers a range of 21 clicks, we left it just in the middle of the range. 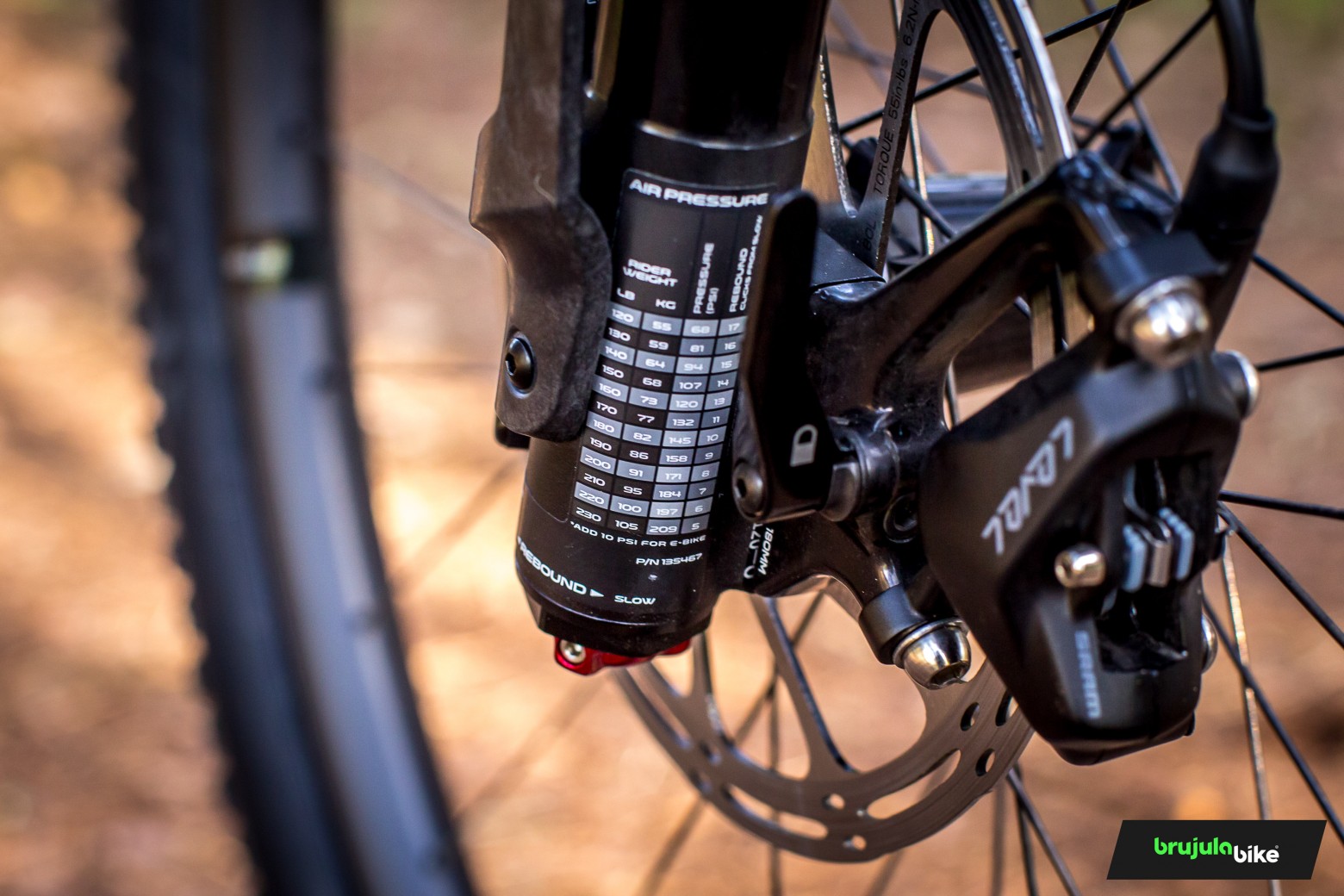 On the upper crown we have a dial to adjust the compression, and of the 7 clicks that it offers we left it practically open to enjoy the tremendous sensitivity of this fork, thinking that during the test we might have to close some more points if in hard braking or light braking the fork would sink too much, but it was not the case.

And around this compression dial we have the locking lever, which with less than a quarter turn and with a very clear and easy to operate click we go from everything to nothing, because the Lefty's lock is a real lock. 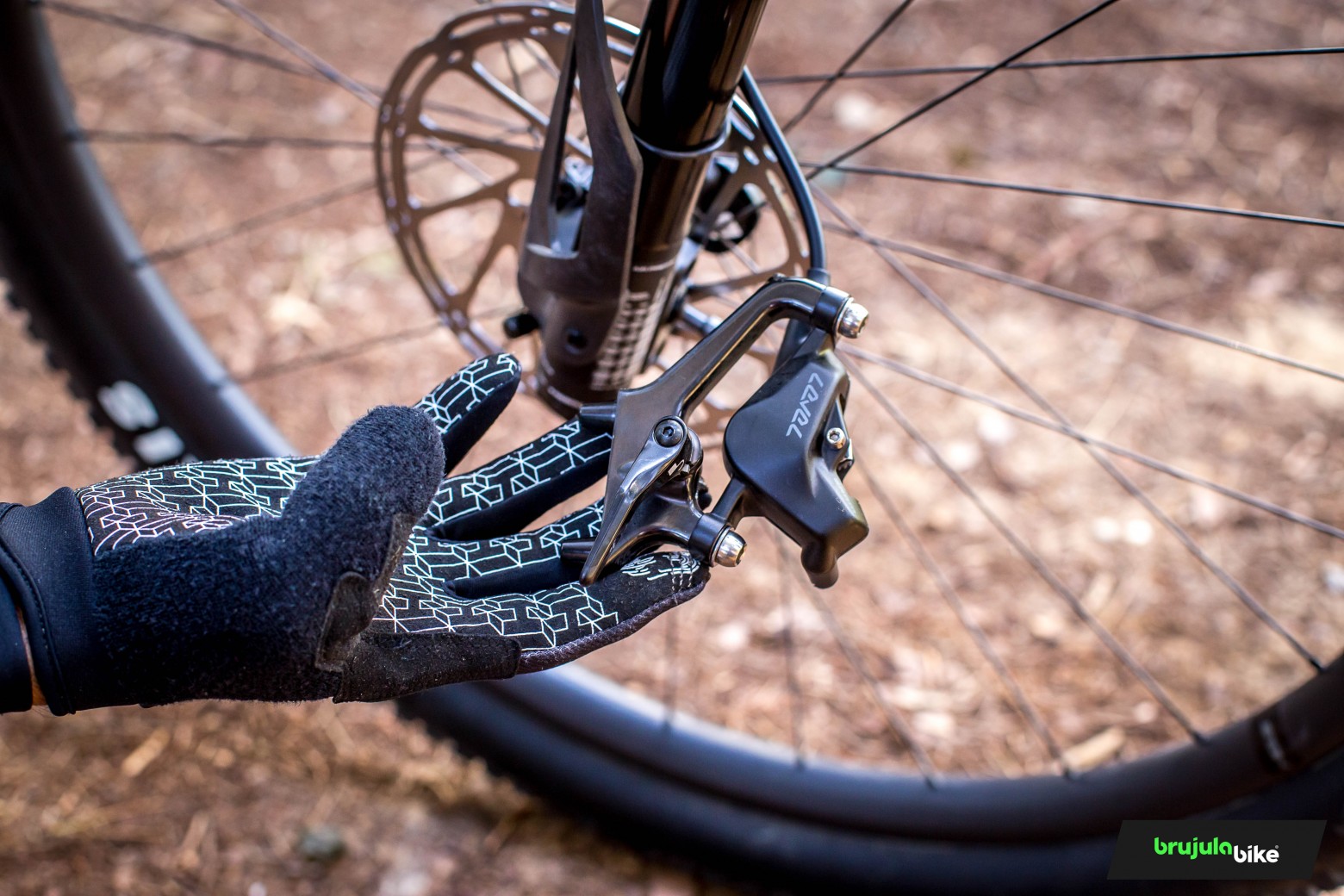 On the road with the Lefty 120

We started our field test on asphalt. Here we tested the efficiency of the lockout and the sensations that the Lefty transmits when pedalling standing up on the first climb we faced. As usual with Lefty forks, the lockout is totally firm, although in the event of an impact it gives way momentarily, protecting the system. 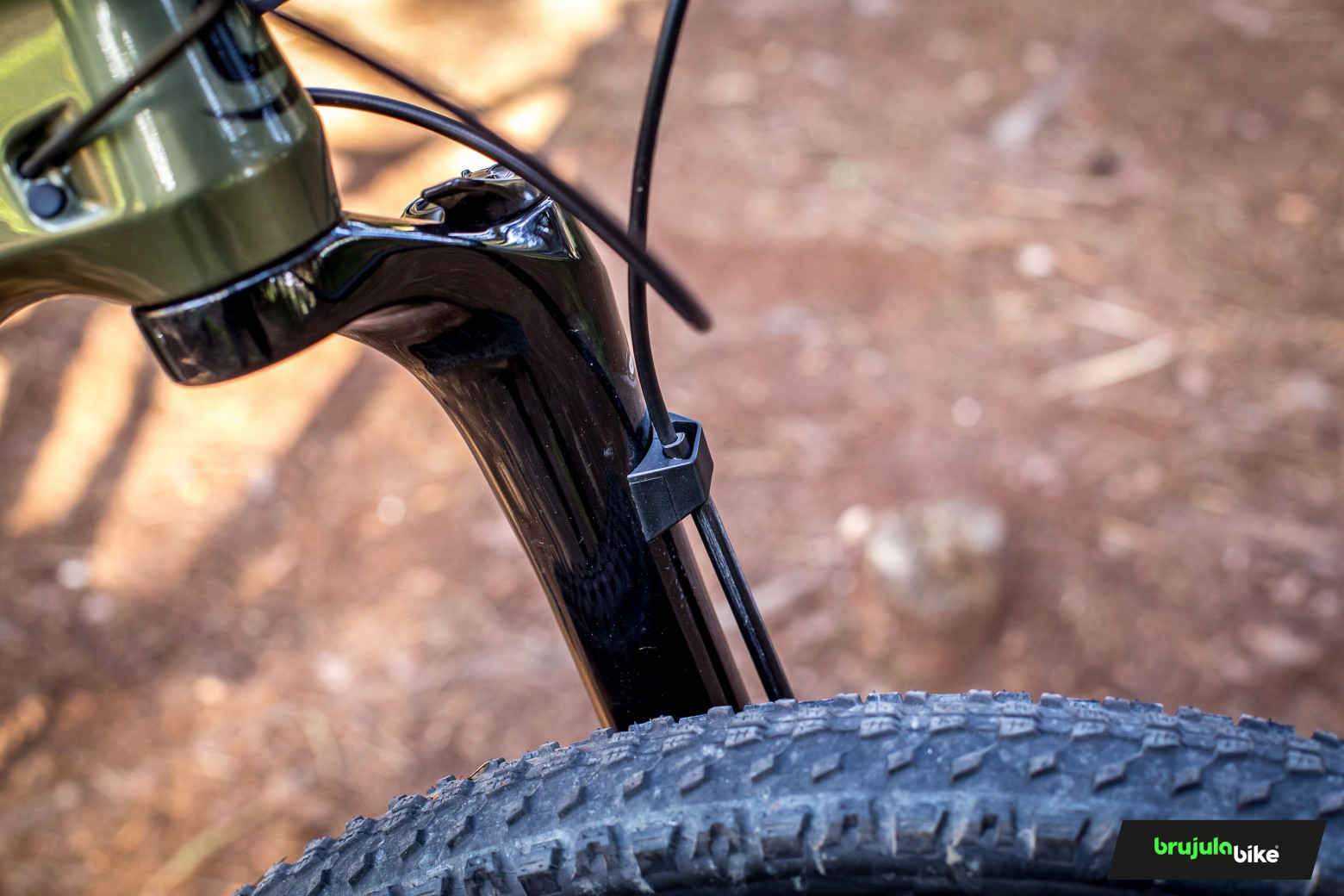 Once we get into an uphill section we can see how the tremendous sensitivity of this fork translates into motion, and it simply absorbs everything, even at low speeds and with small irregularities the fork is constantly working. This means that if we want to pedal standing up in some sections it is advisable to block if we don't want the fork to move too much.

After a long climb, it's downhill on a high-speed track with a somewhat broken road surface. Here the Lefty starts to put a smile on our faces and where normally we end up with our hands punished by the constant curling, today it seems that the bumps have been mitigated and our hands are grateful for it. 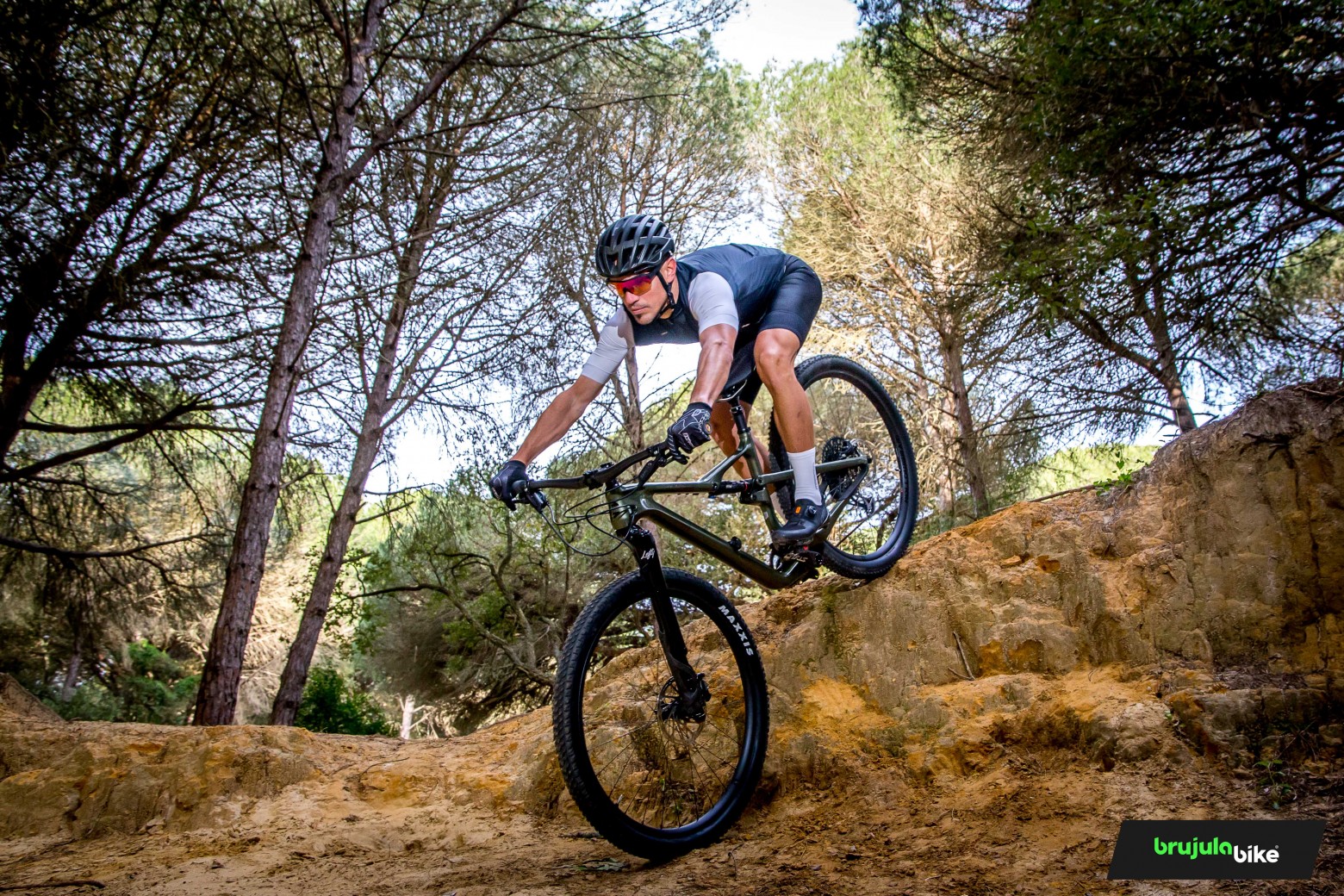 Considering how well the Lefty 120 behaves, we decided to do a trail where we would never have thought of putting an XC bike, but the Scalpel SE LTD with this fork allows you to take certain licenses. Here we really put it to the test and the truth is that it passed with honours, it felt like we were riding an enduro fork with more travel.

The torsional stiffness of the Lefty is really striking. In very bumpy areas where it looks like we're going to lose control the front wheel still responds to our every steering input, allowing us to guide the front wheel exactly where we want it to go. 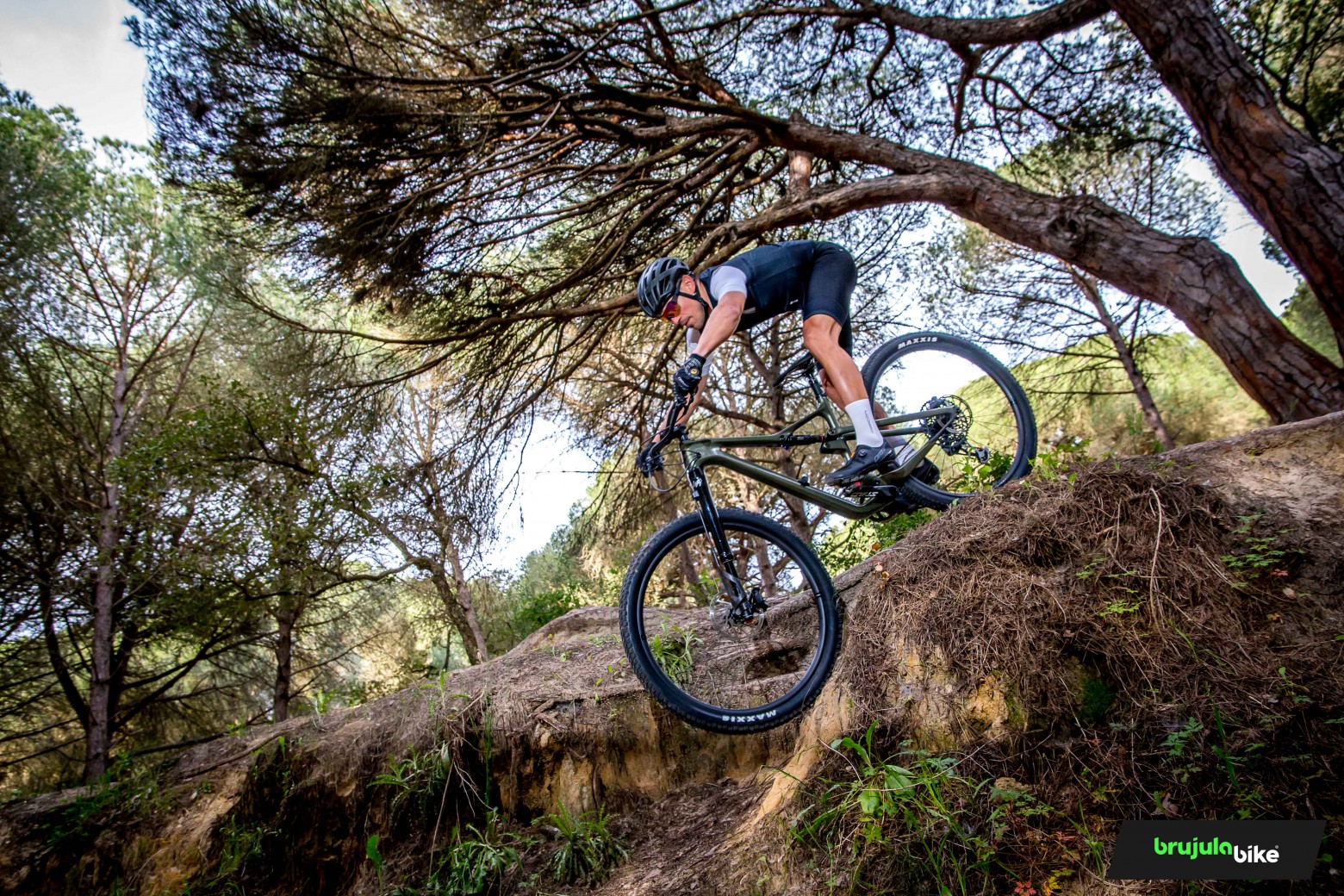 Although we don't like clichés, it must be said that with this fork it really feels like you have more than 120 mm of travel. We were doing a lot of checks on the travel used. As we said before the feel at first seemed soft but that is the feeling it gives due to the almost total absence of friction. The progressivity curve is very well achieved, the first section is a bit more linear but not too much, and as the fork sinks the progressivity increases to the point that it is really difficult to push the travel all the way to the end. In areas of strong impacts we expected to notice the sensation of a hard stop or a very abrupt stiffening at the end but the truth is that it simply absorbs them and gives the feeling that the Lefty asks for more.

During the rest of the days that we have enjoyed the Lefty 120 we have put it to the test on a multitude of trails and the truth is that it has passed the test with honours. We can safely say that it is the most sensitive fork we have tested. It is very remarkable the precision it gives to the steering thanks to its torsional stiffness and the operation of the lockout is also outstanding as it is a real lockout, turning the bike into a total hardtail on asphalt.

It is really such an excellent fork and it is very difficult to find a negative point about it. Perhaps the fact that it has no remote lockout and is such a sensitive fork means that every time you want to stand up, you either put your hand out and lock out, or you assume there's going to be some sway. It is likely that with a third intermediate position this would be solved. 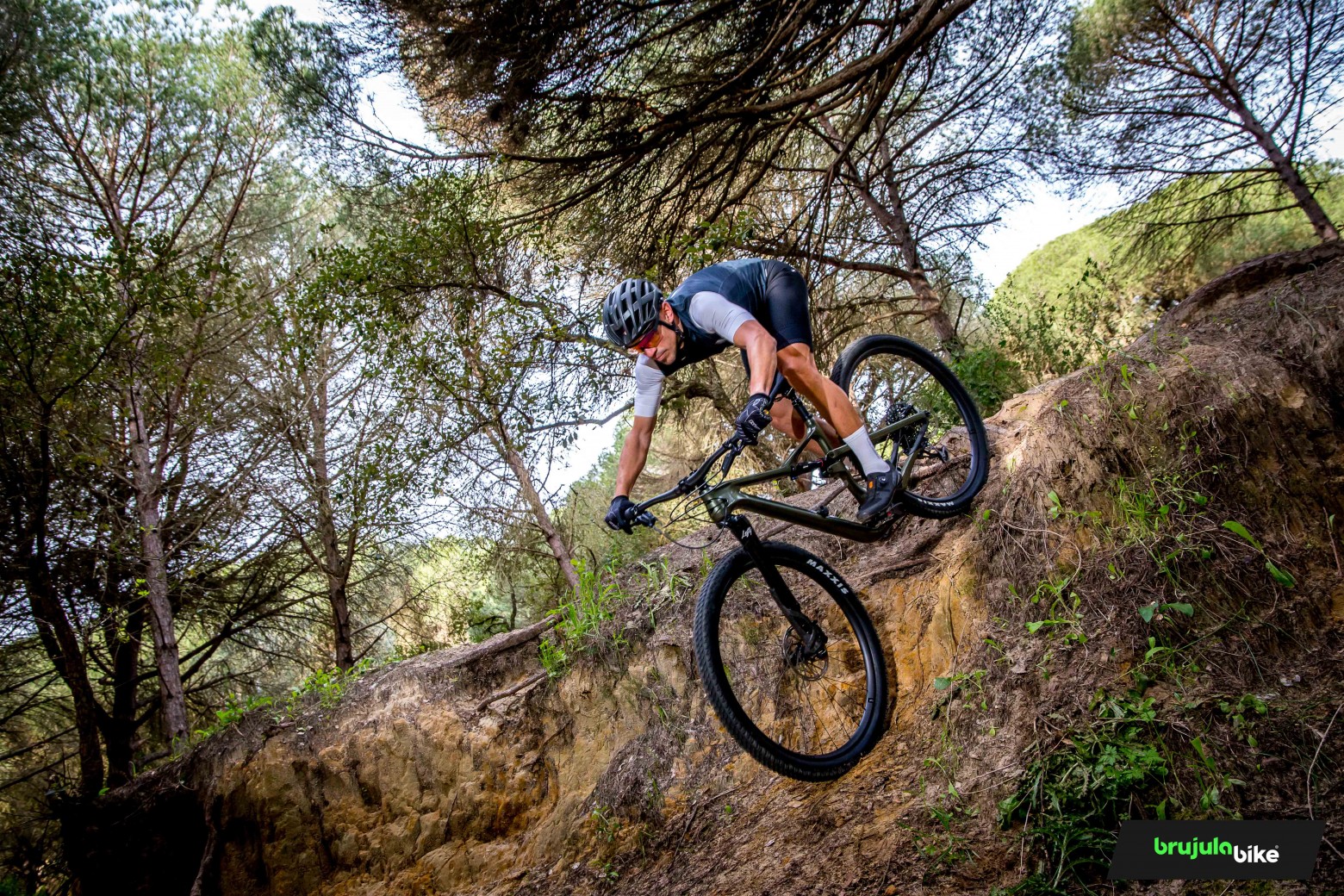 In short, the Lefty Ocho Carbon 120 has made us fall in love with it and we consider it one of the best forks on the market, which also really competes with the rest of the forks as this eighth generation of the Lefty can be mounted on any frame as it has a tapered steerer tube like its rivals. However, you will have to pay a considerable sum of money to get it. It is expected to be available separately in a few months at a price of 1599€.