The Spark family has a very special name for their fastest bicycles, the RC. This acronym corresponds to the Racing Concept collection, a place reserved by the brand for riders looking for maximum performance in competition. Among them the Scott Spark RC 900 SL AXS 2021 is the top of the range model, the lightest, and we have tested it. 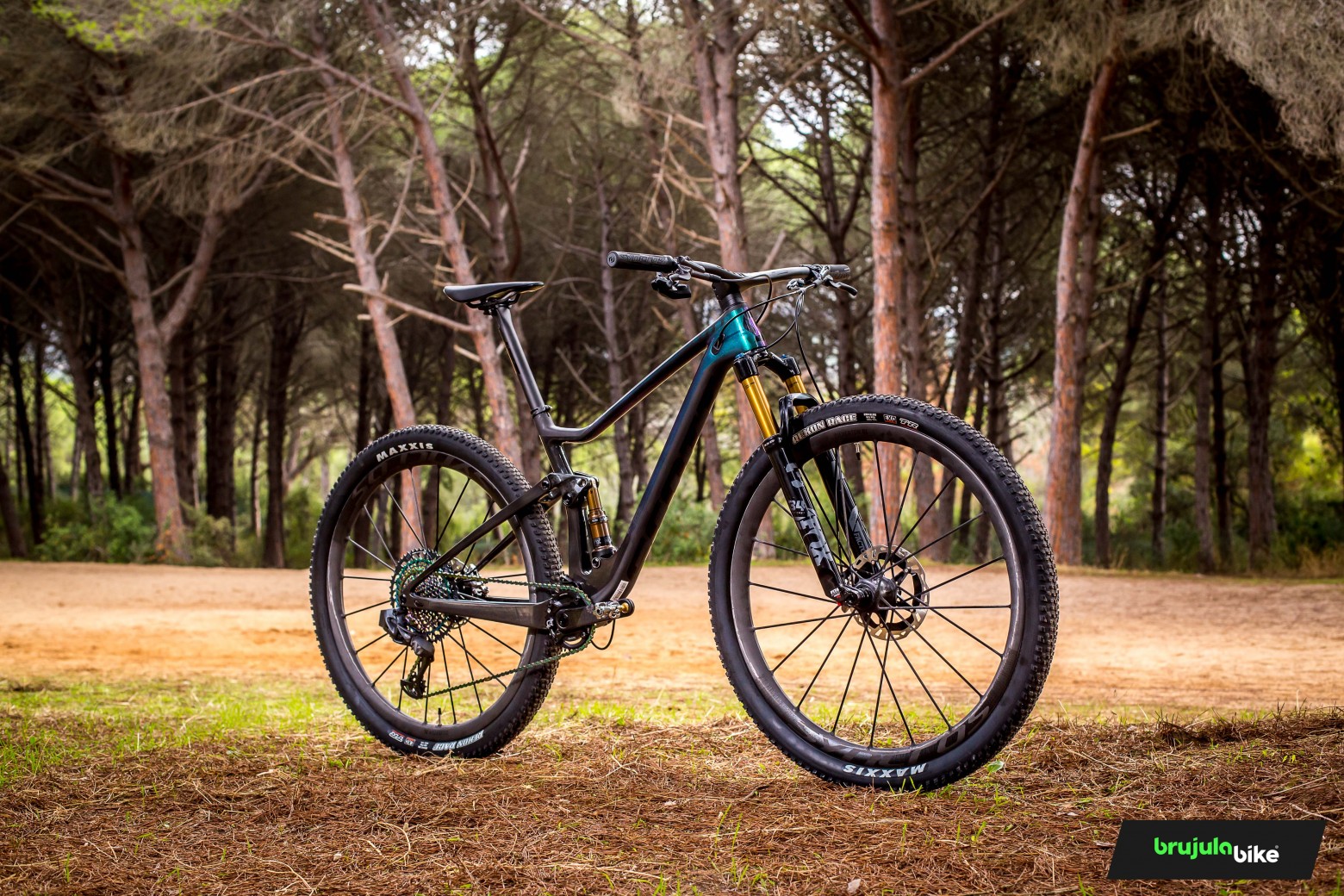 As you know, the current Scott Spark was developed along with Nino Schurter with the purpose of winning the gold medal at the Rio Olympics. The goal was achieved and in the meantime Spark has won everything in the last few years, from the World Championships or the XCO World Cup to the Cape Epic, the most important mountain bike stage race in the world. Among the most important changes introduced by the current Spark we could highlight the location of the shock absorber and a very important evolution in geometry. In fact, we can say that the Scott Spark was a pioneer in the concept of XC bikes that exists today.

Its steering angle was relaxed to 68.5º, when these angles were typical of Trail bikes. Its seat tube was advanced to 73.8º and its reach was increased to 429.5mm in size M. In addition, the bottom bracket was lowered to 319.5mm. 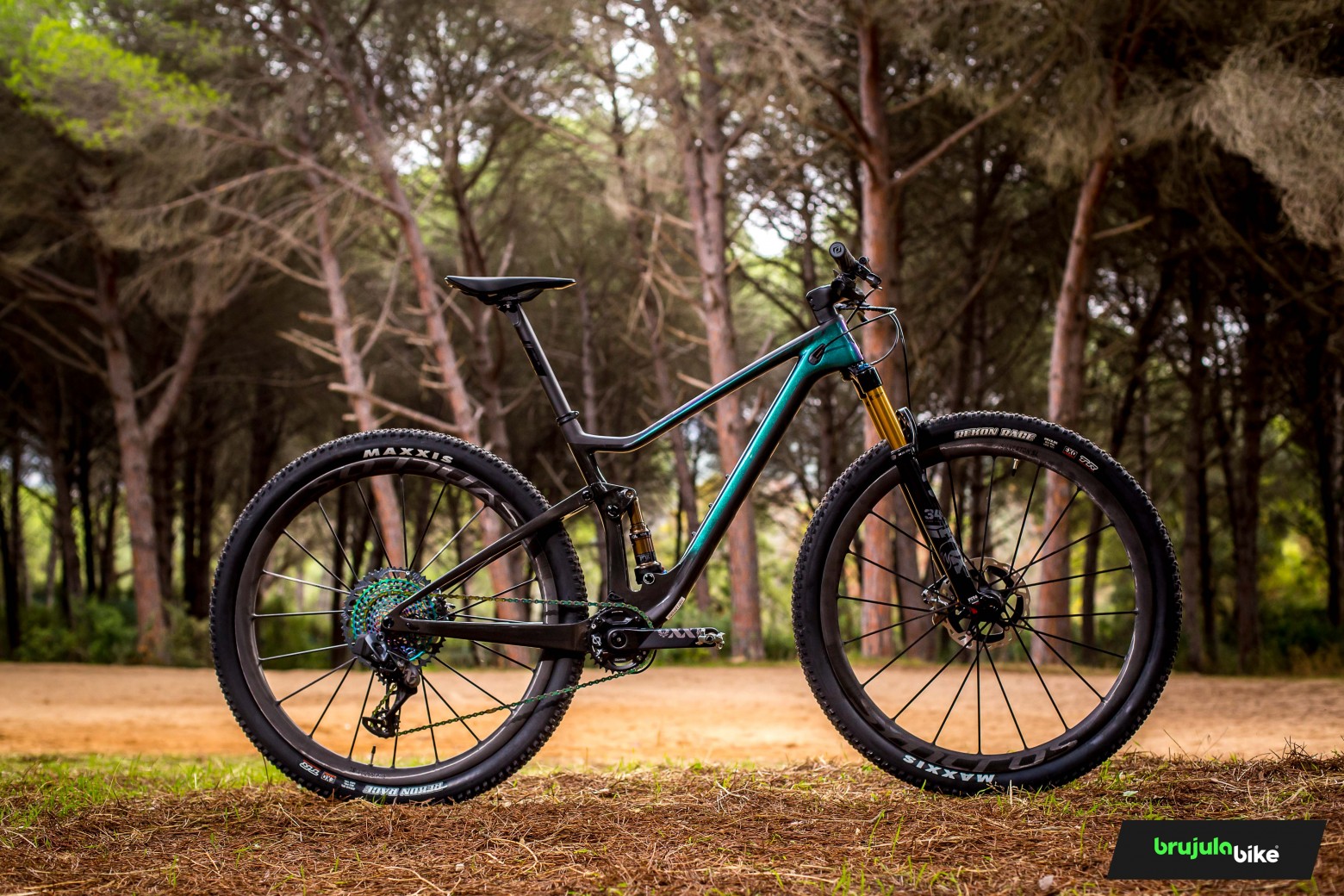 Spark started this trend and has been leading this group of very downhill XCO mountain bikes ever since. Only by watching Nino Schurter in action on the World Cup circuits can we ensure that they achieved their goal.

And what can this bike bring to us the bikers who do not have Nino's capabilities? In this test we have tried to find out...

An exclusive frame for a very unique bike

There are three different designs in the Spark RC frame range. The most economical ones have Scott's HMF fibres, the high range has HMX fibres and for its top of the range the HMX SL fibres are reserved, giving a result in the scale of 1799g with shock absorber included. 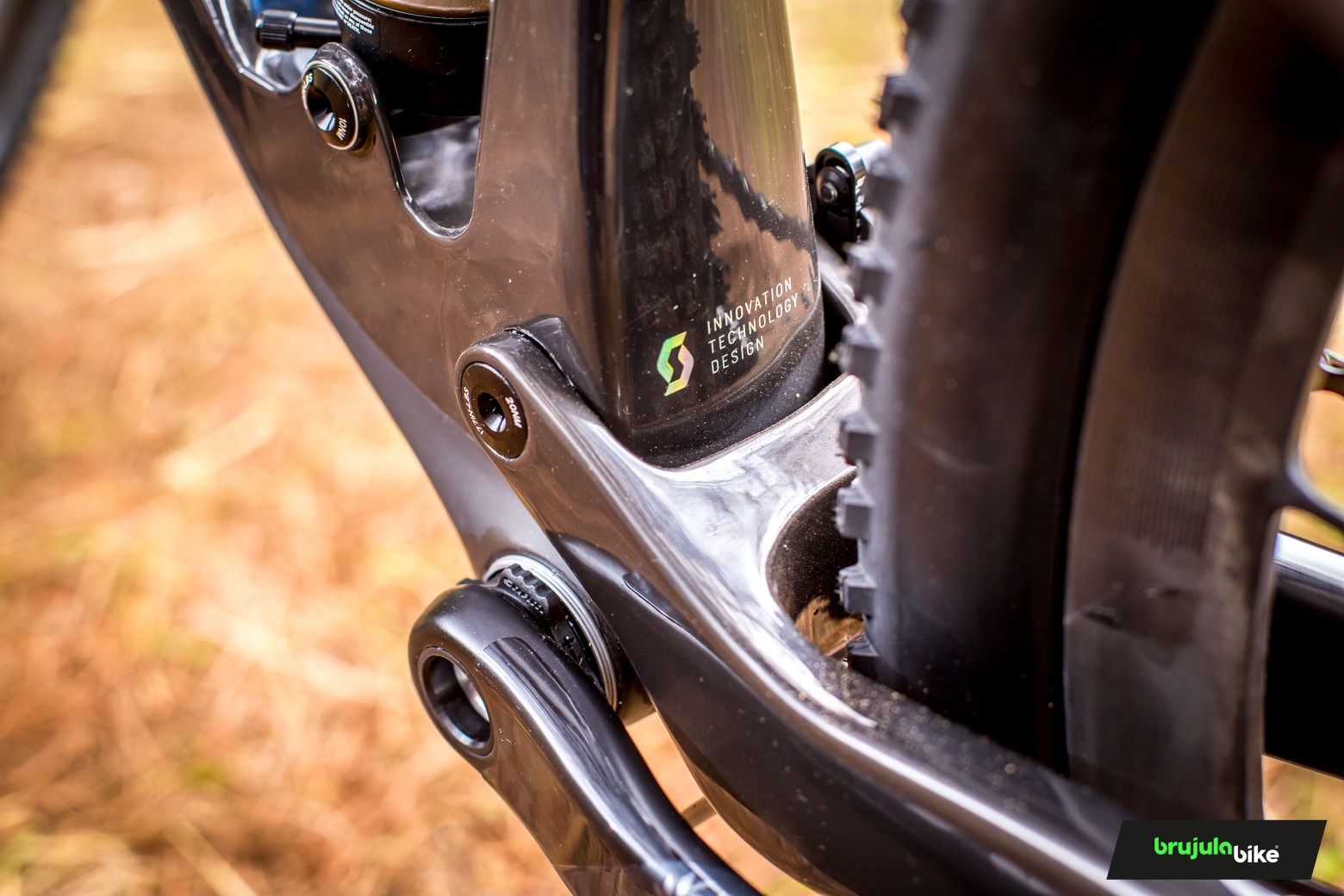 According to Scott this weight is achieved without sacrificing stiffness thanks, among other things, to the use of finite-element analysis software during the design of the frame.

Also contributing to the lightness is the use of a carbon fibre crank in both this model and the World Cup versions, saving 37g depending on the brand. 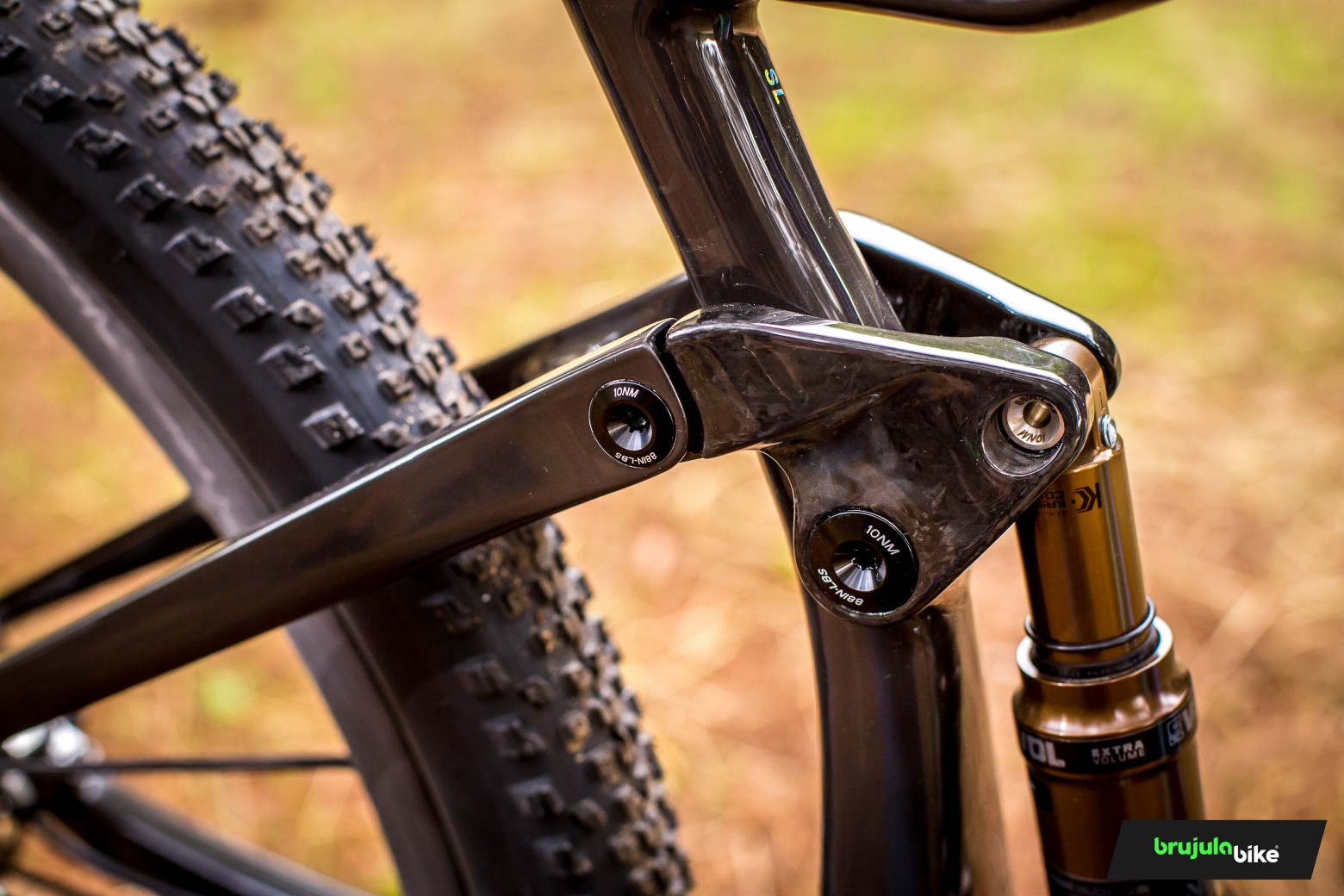 An asymmetrical design is used in the construction of the frame. In addition to adopting the Trunnion anchor in the lower part of the shock absorber, this is moving slightly to the left, thus achieving that the carbon structure is based on straighter lines obtaining better performance. 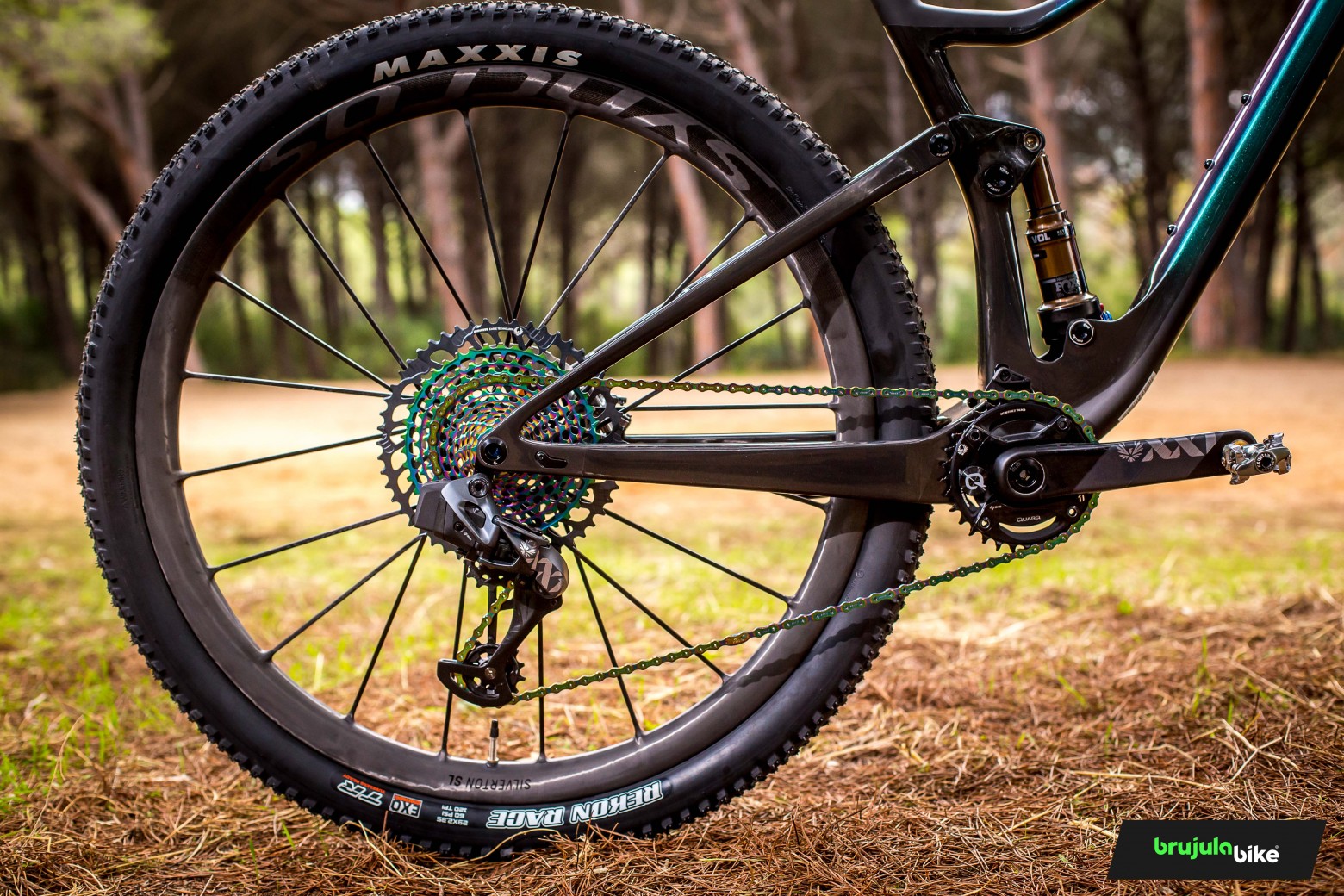 The rear brake caliper anchorage has been designed so that it does not interfere with the bending of the rear triangle. The caliper is mounted on a frame which is anchored on one side to the brake-sheath and on the other side to the rear axle. 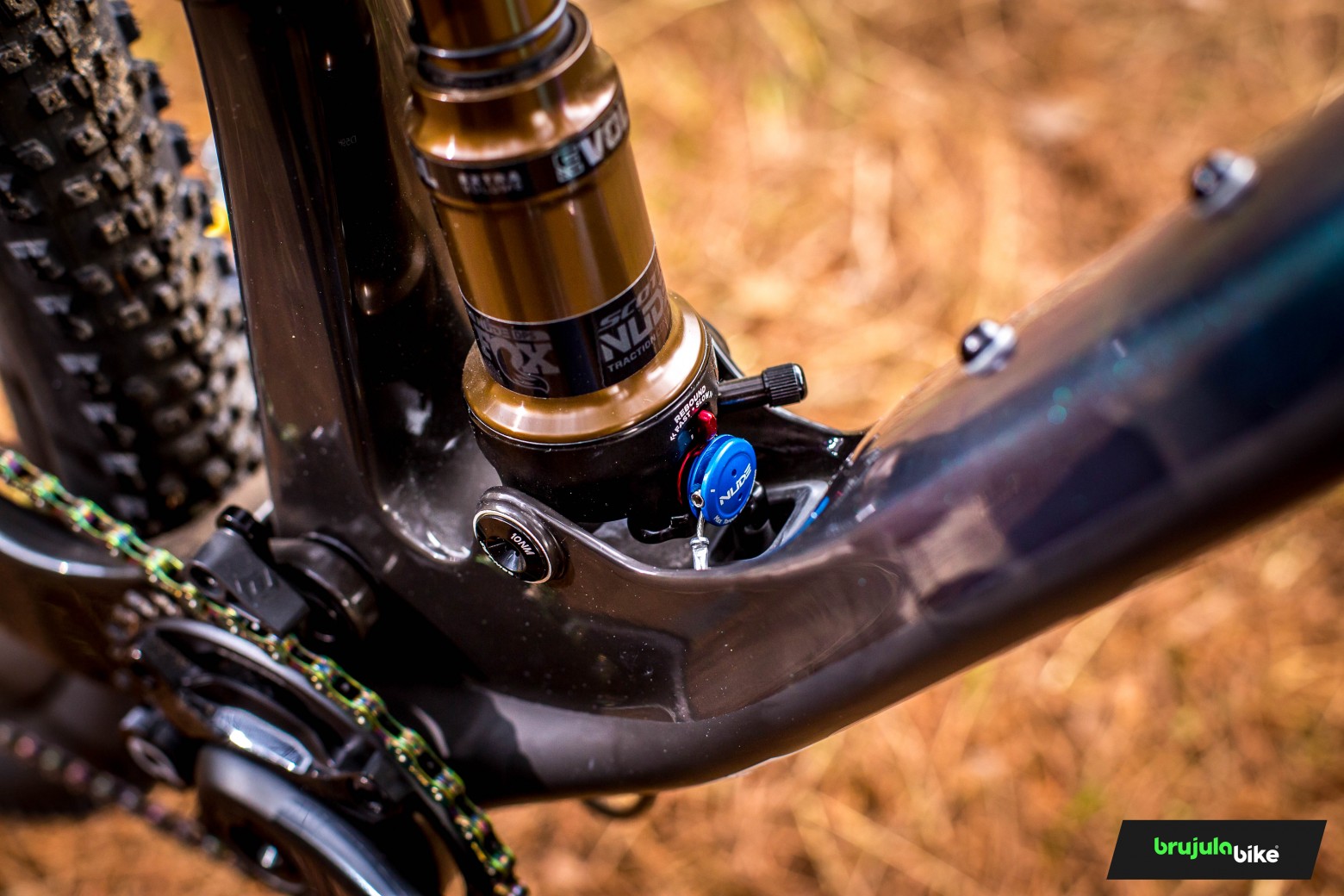 But the most well-known and relevant feature of the Spark range is the TwinLoc suspension system, which combined with the Fox NUDE EVOL shock absorber, customised for Scott, achieves an adjustment with three positions in which not only the compression resistance of the shock absorber can be varied, but also gives a different travel and even a slight variation in the geometry in each of its positions.

The system is based on a shock absorber with a double air chamber. In the open position both chambers are active and the shock absorber gives a 100 mm travel to the rear wheel, in the intermediate position not only does it act on the compression but it closes one of the shock absorber chambers, varying both the travel, which remains at 70 mm, and the progressiveness, making in this position the Sag is lower and therefore the geometry varies slightly favoring the performance of pedaling and climbing. The third position is the blocking position, which, as usual, gives a few millimetres in the event of an impact to protect the system. 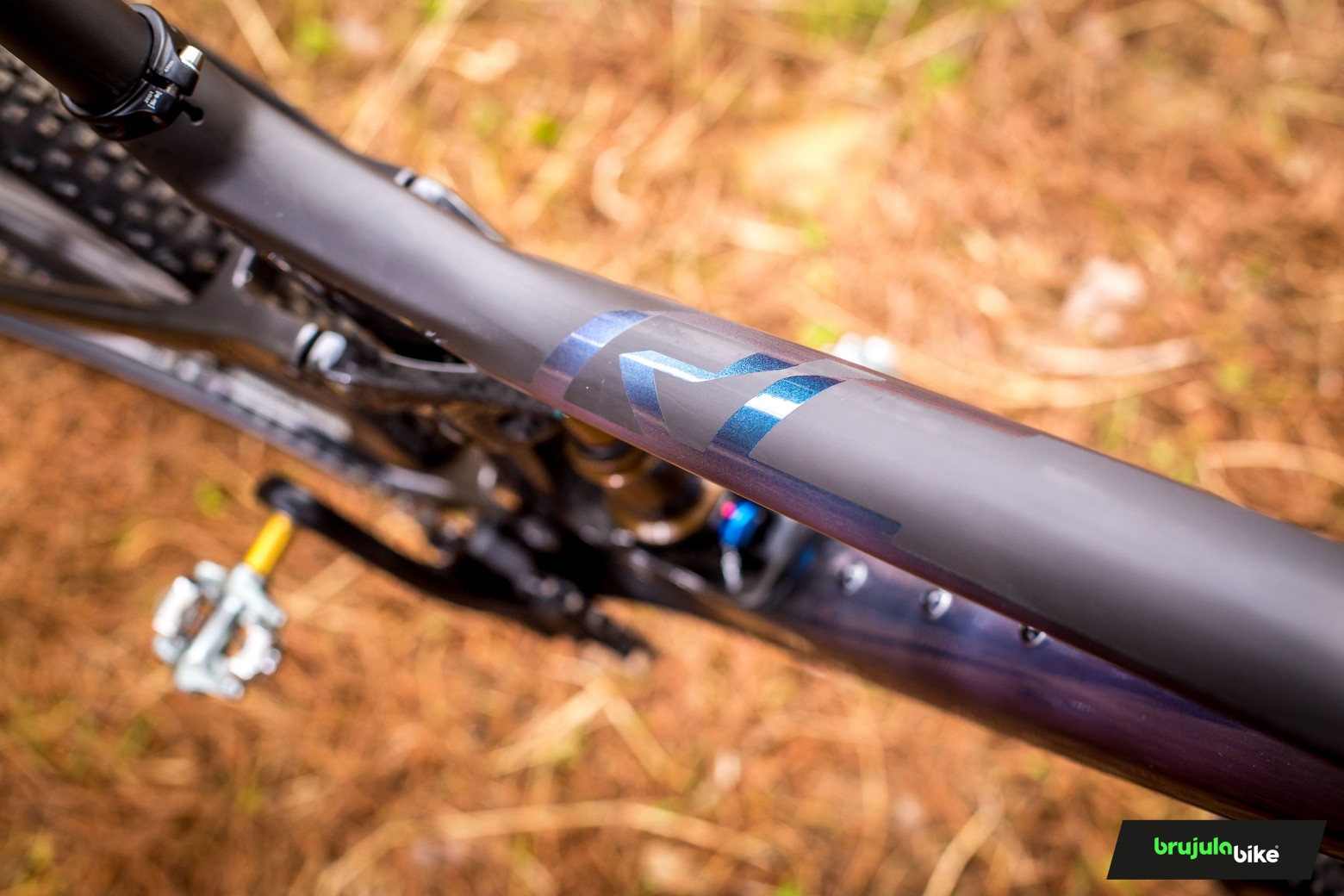 As many of you will know, the TwinLoc control acts on both suspensions at the same time, although in the case of the fork it only acts on the compression resistance.

Fox 34 SC Float Factory, breaking down barriers inside the XC

Until recently, a fork with 34mm bars was considered to be a Trail or even an Enduro fork. But the evolution we are seeing lately inside the Cross Country bikes makes us start to see such robust forks as this one in the XC ranges. 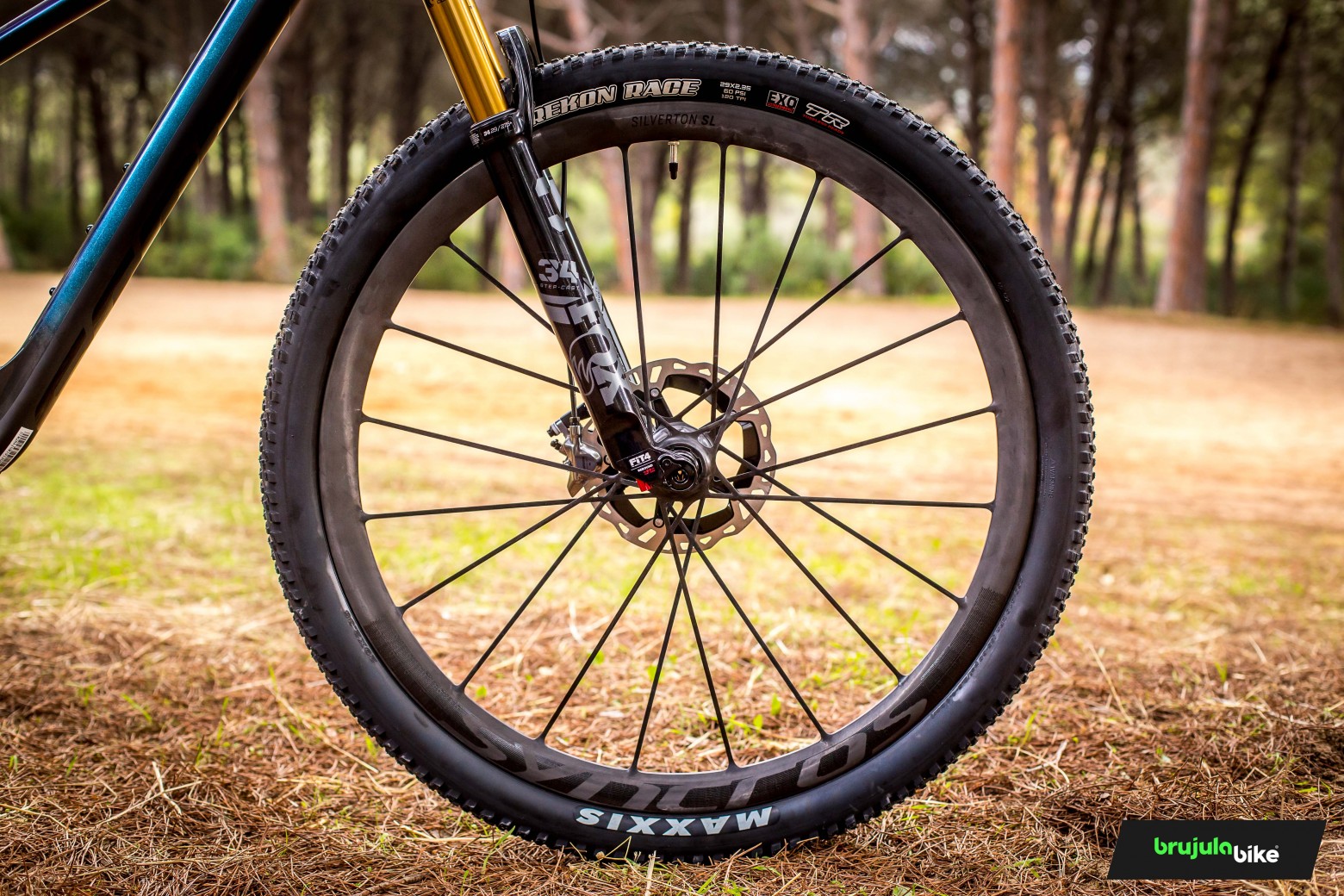 In this case it offers a travel of 110mm, and taking into account that it is a short travel compared to what this same structure can offer, the result is an incomparable stiffness.

But this stiffness is not the only thing that stands out about the Fox 34 SC Float Factory. Of course, when it comes to the top of the range, its bars come with Fox's Kashima finish. 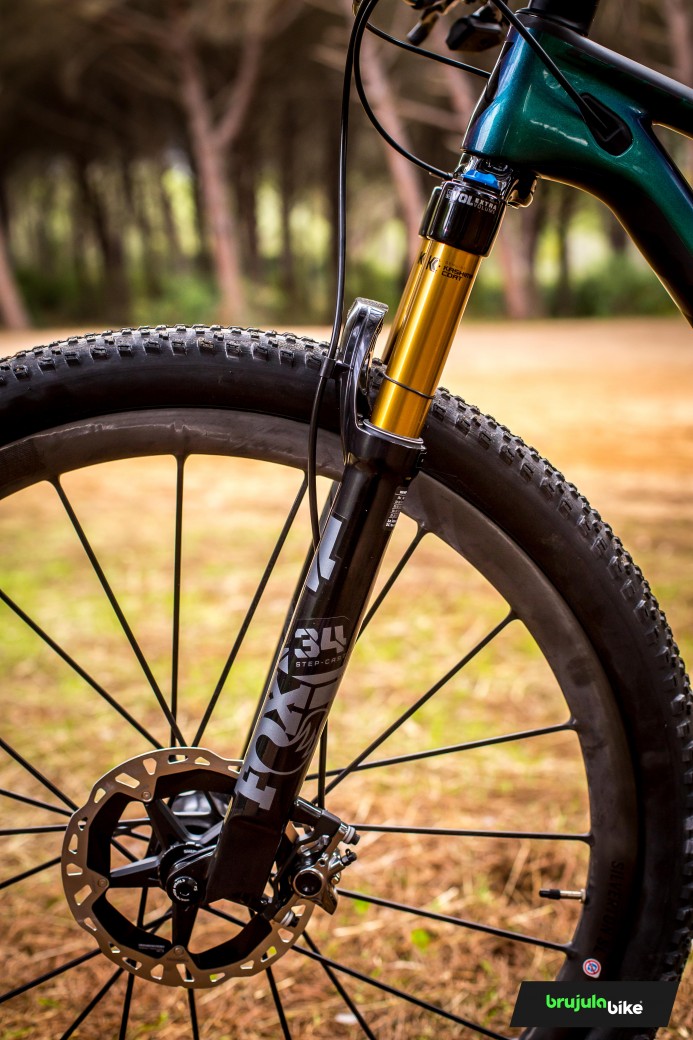 After testing it thoroughly we came to the conclusion that it is worth the sacrifice in weight compared to purely lightweight versions of XCO to be able to enjoy the performance and safety that this fork provides.

In the assembly of this exclusive bike we find components that are to be contemplated carefully. A good example of this are the wheels. We are not going to find anything similar on the market within the MTB. They are the Syncros Silverton SL. These wheels are made of a single piece of carbon fibre, weighing 1250g and whose internal parts of the hub are manufactured by DT Swiss with ceramic bearings and its famous Ratchet System. 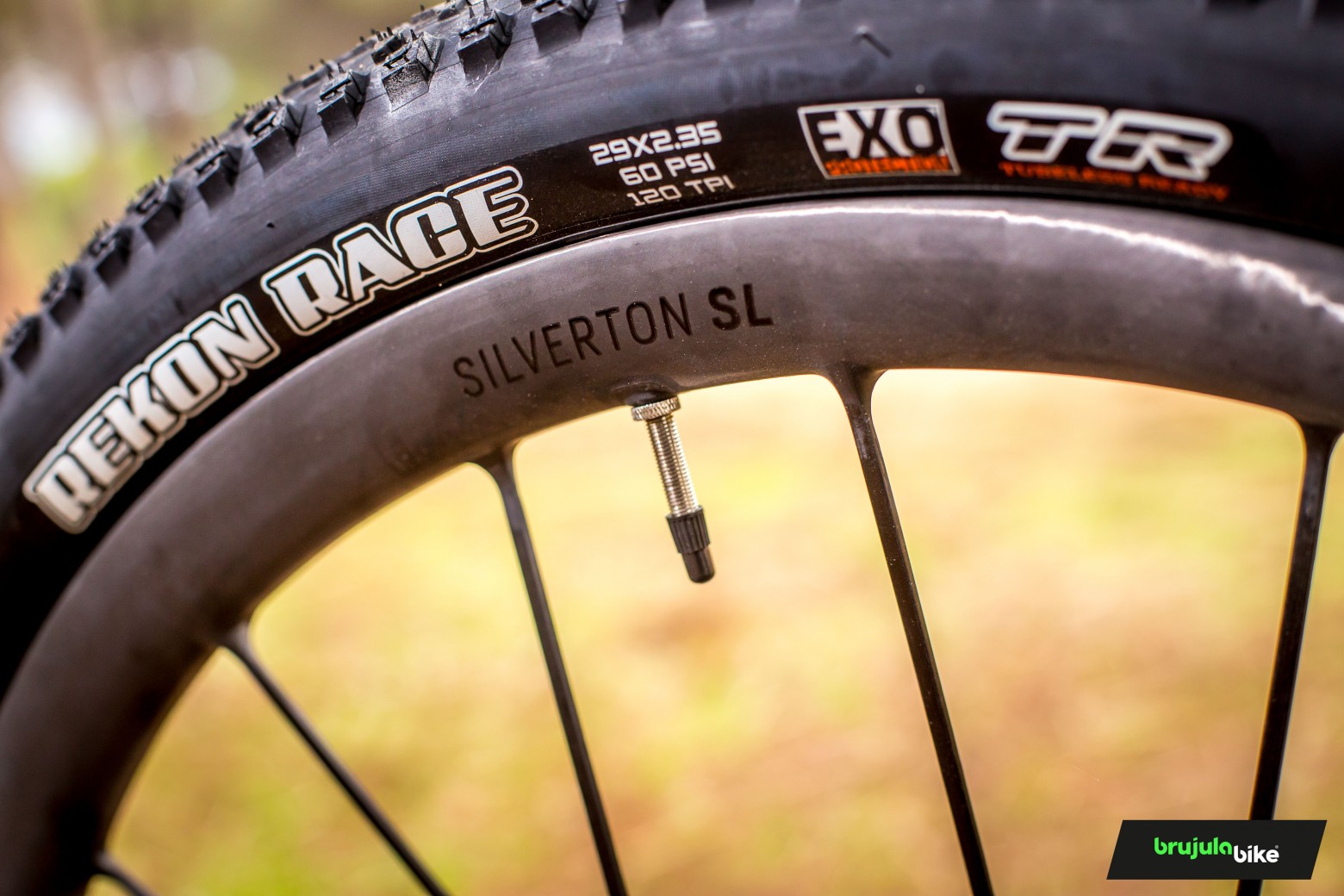 These wheels come with 2.35 Maxxis Rekon Race tyres. We have been delighted with their performance. Good balance between rolling and grip and a generous ball that gives us extra comfort and allows us to roll at low pressures.

The remaining components are still handled by Syncros. Special mention should be made of its Syncros Fraser IC SL carbon one-piece stem and handlebar assembly, which looks spectacular. Its width is 74cm and the result of its shapes is equivalent to a 70mm stem in size M. 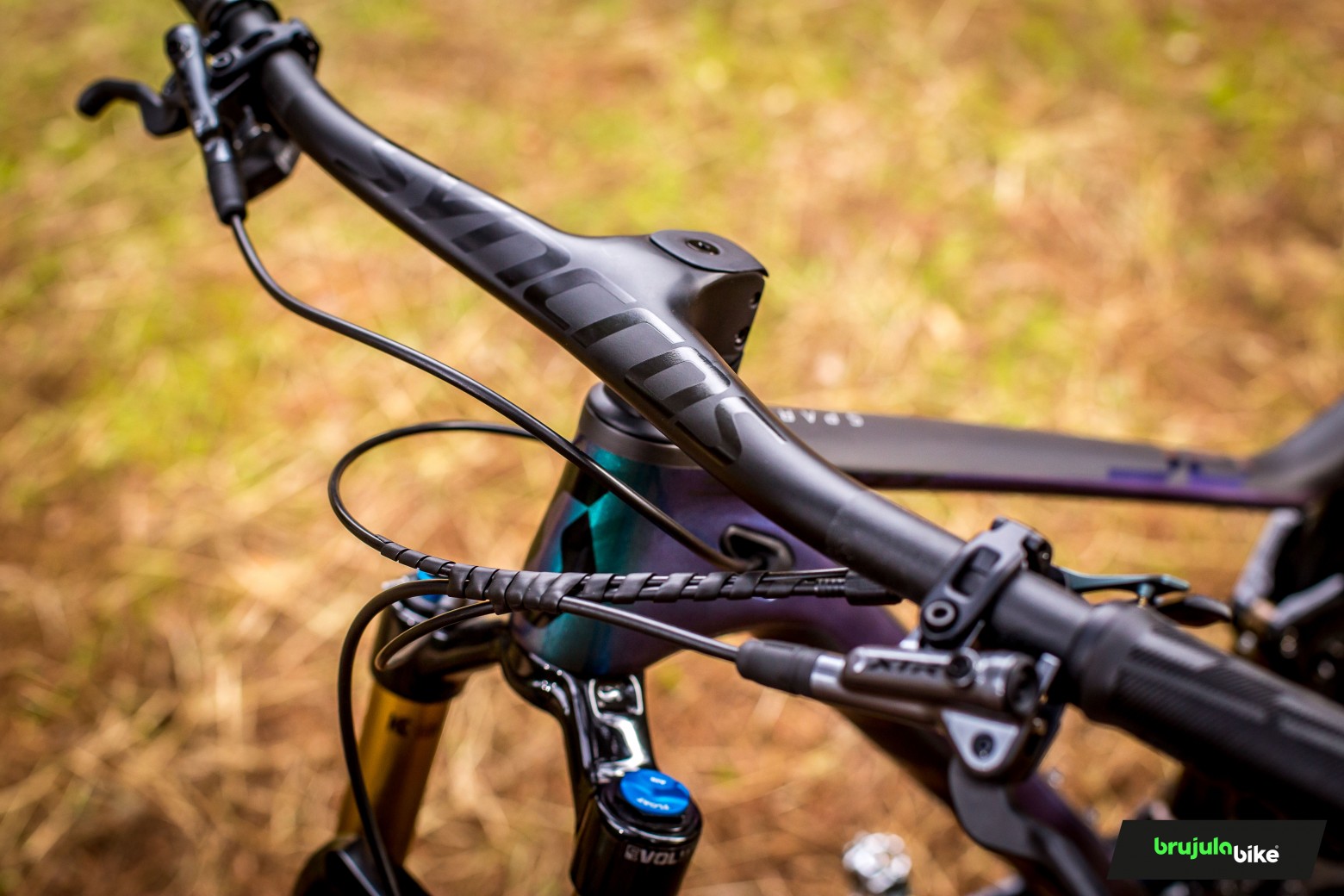 Its Syncros Belcarra Regular 1.0 saddle is 130 mm wide and it seems narrow to us. Although this is something personal of each cyclist. The positive aspect is that this narrowness allows us to slow down more easily in downhills since we do not have a telescopic seatpost as standard.

In the drivetrain we have the Sram XX1 AXS group. Electronic and wireless group, the maximum standard of the brand, which we have already tested on other occasions and we can only reaffirm its impeccable operation. 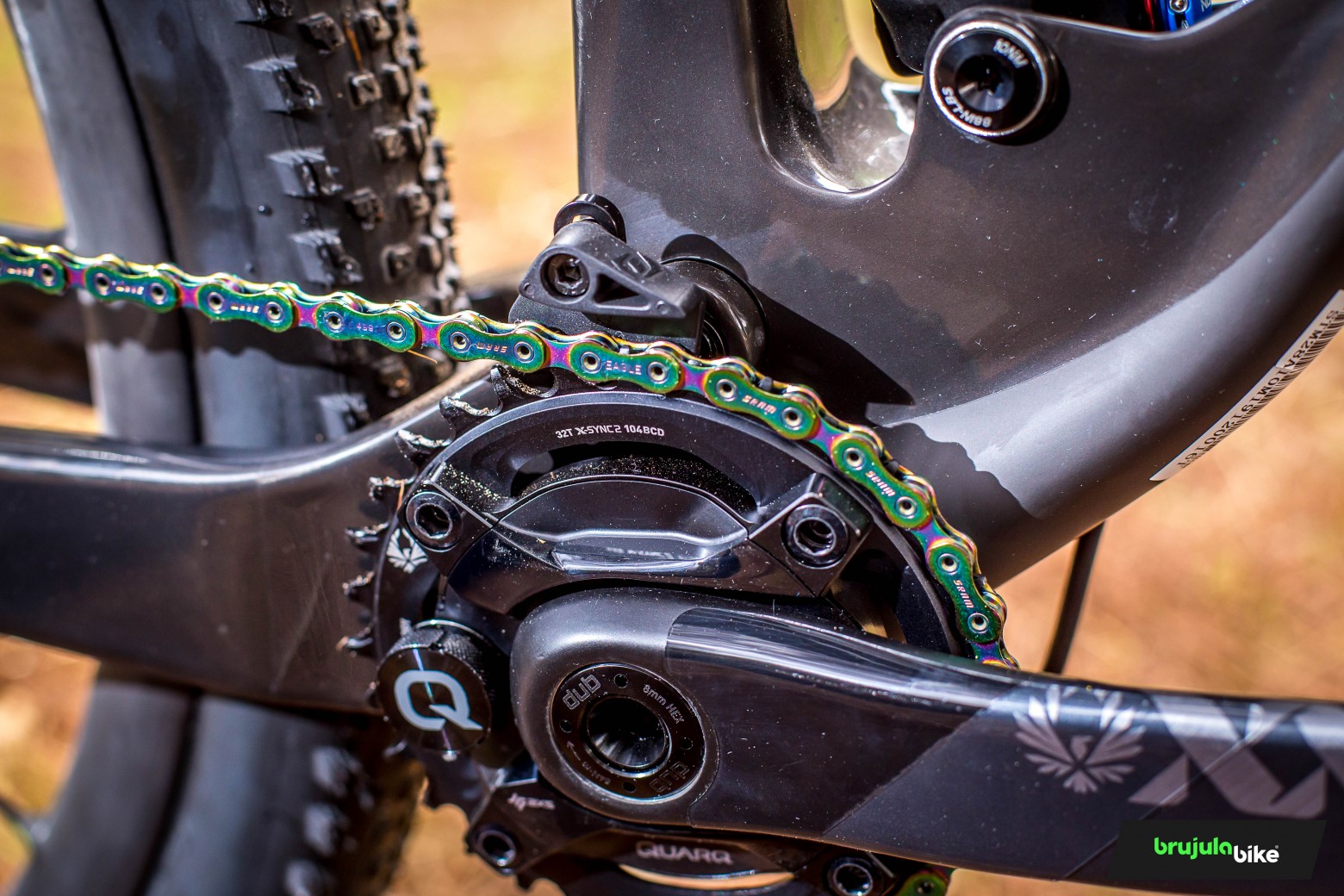 It mounts the 10/52 cassette version, which along with the 32-tooth plate it mounts in front, allows us to climb impossible slopes. In addition, its XX1 cranks have the Quarq power meter incorporated. 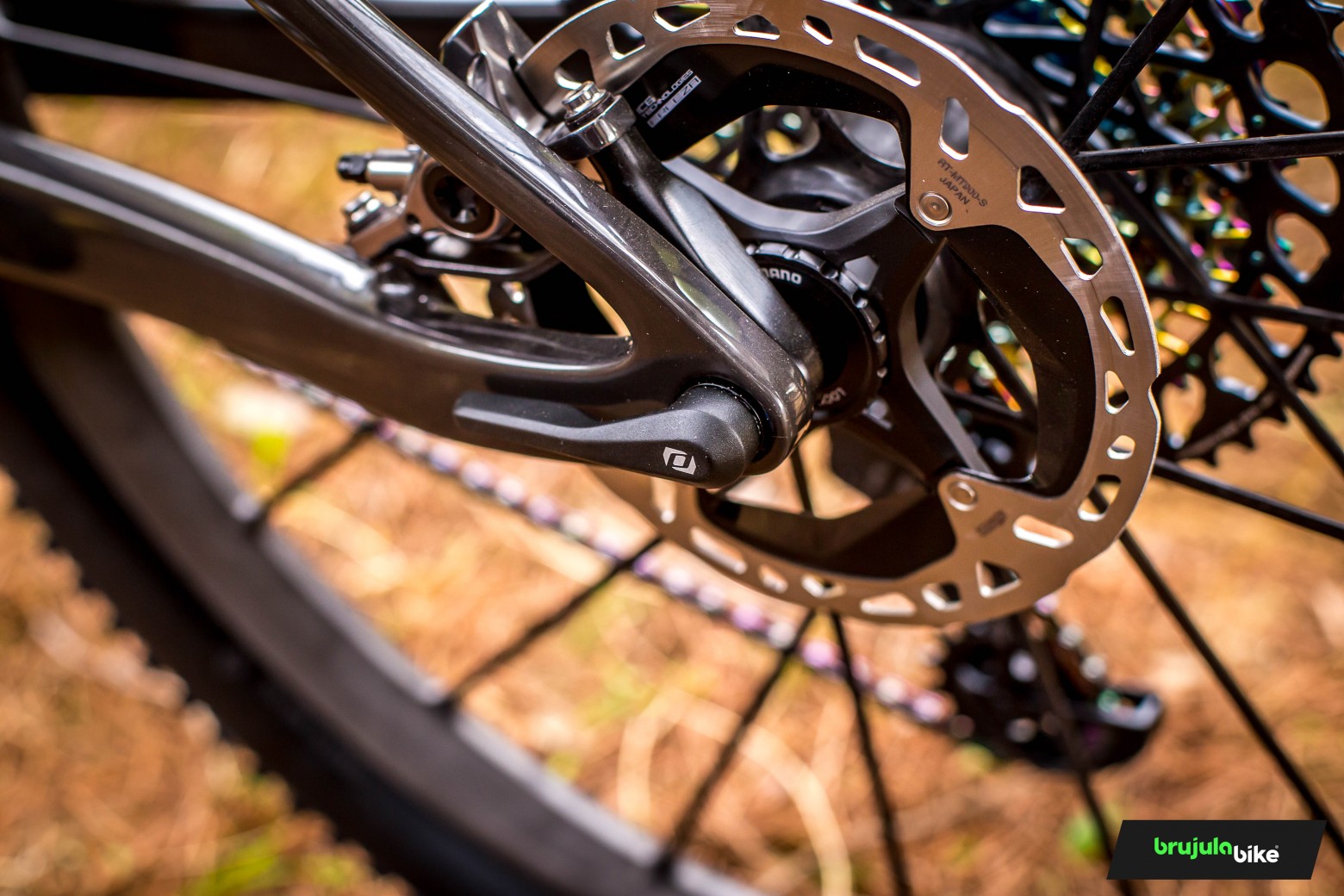 Braking is entrusted to the Shimano XTR, a very good choice. In this model Shimano has achieved a magnificent balance between lightness and power, as well as absolute reliability (some reliability problems have been left behind in the previous version) and simple maintenance. 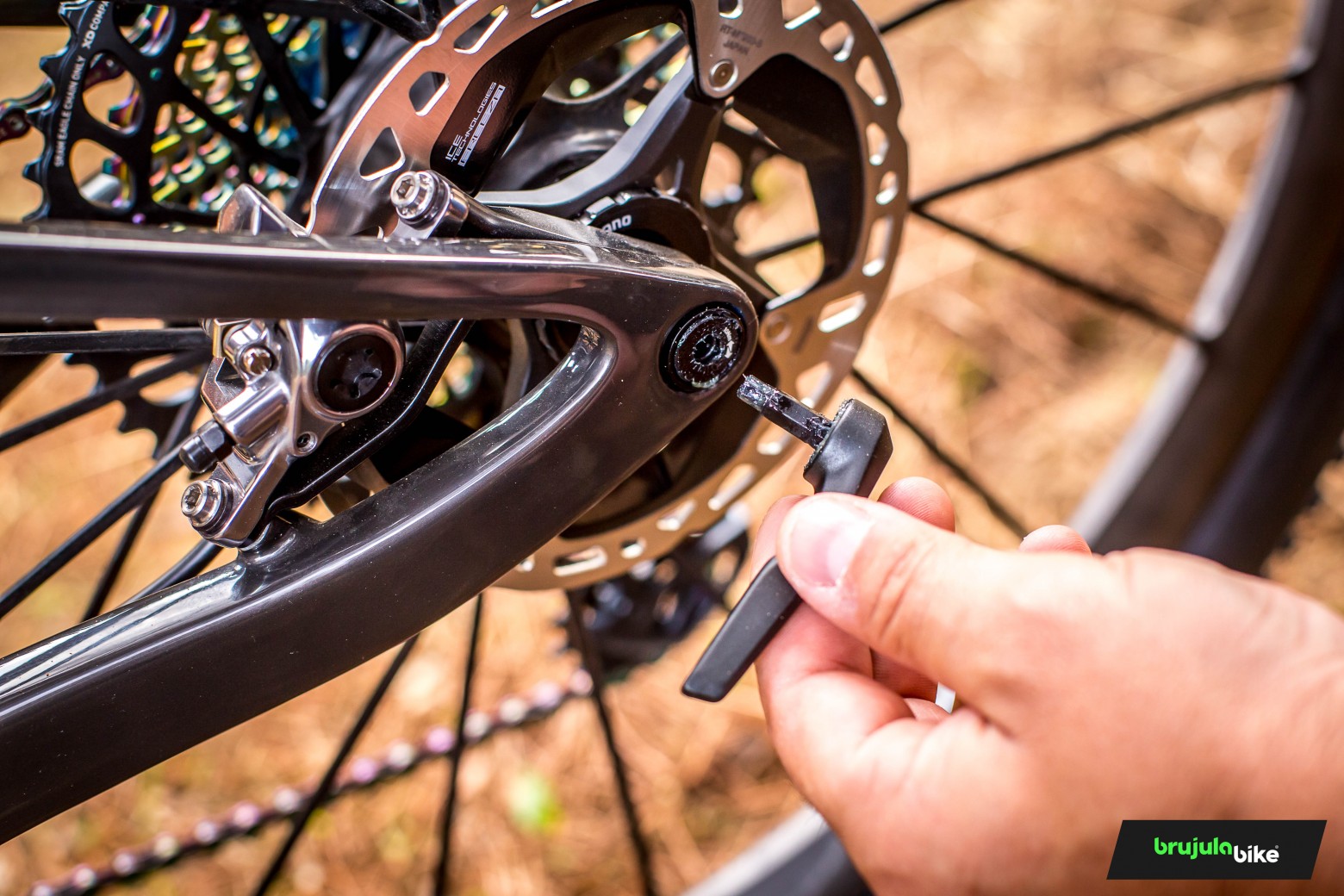 We arrive at the most subjective part of the test, our sensations. We expected to get on a competition bike, with the discomfort that sometimes comes with a bike designed by and for maximum performance, but when we rode the first few metres we were surprised by its comfort.

We do not ride very stretched due to its short stem, and as for the absorption of the irregularities of the terrain, the large ball of its tyres and a more comfortable suspension than you would expect in a purebred XC, make comfort the first quality that catches our attention. 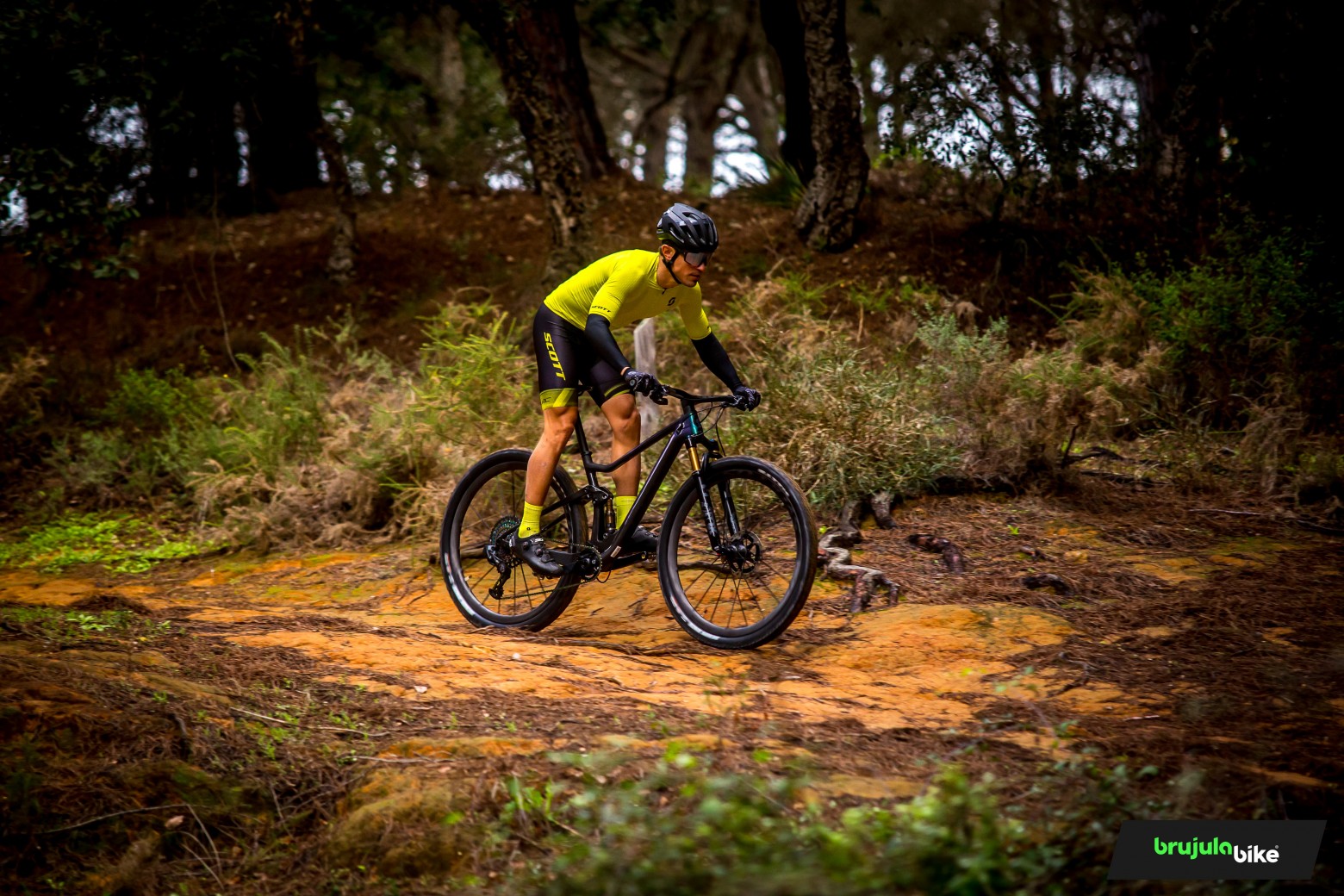 Despite what was said before, when we increase the pace the bike gains speed easily, but with this suspension system it is almost essential to use the intermediate position of the Twinloc as soon as we squeeze on the pedals, if we do not want to notice excessive swinging when pedalling. In our case, this intermediate position is the one we have used most of the time.

A special feature of the Spark RC 2021 is the increased fork travel. Before testing it we thought that perhaps it would lose part of its racing character. But after testing it it was clear to us that it looks great. And is that studying its geometry seems that this frame was asking for it. 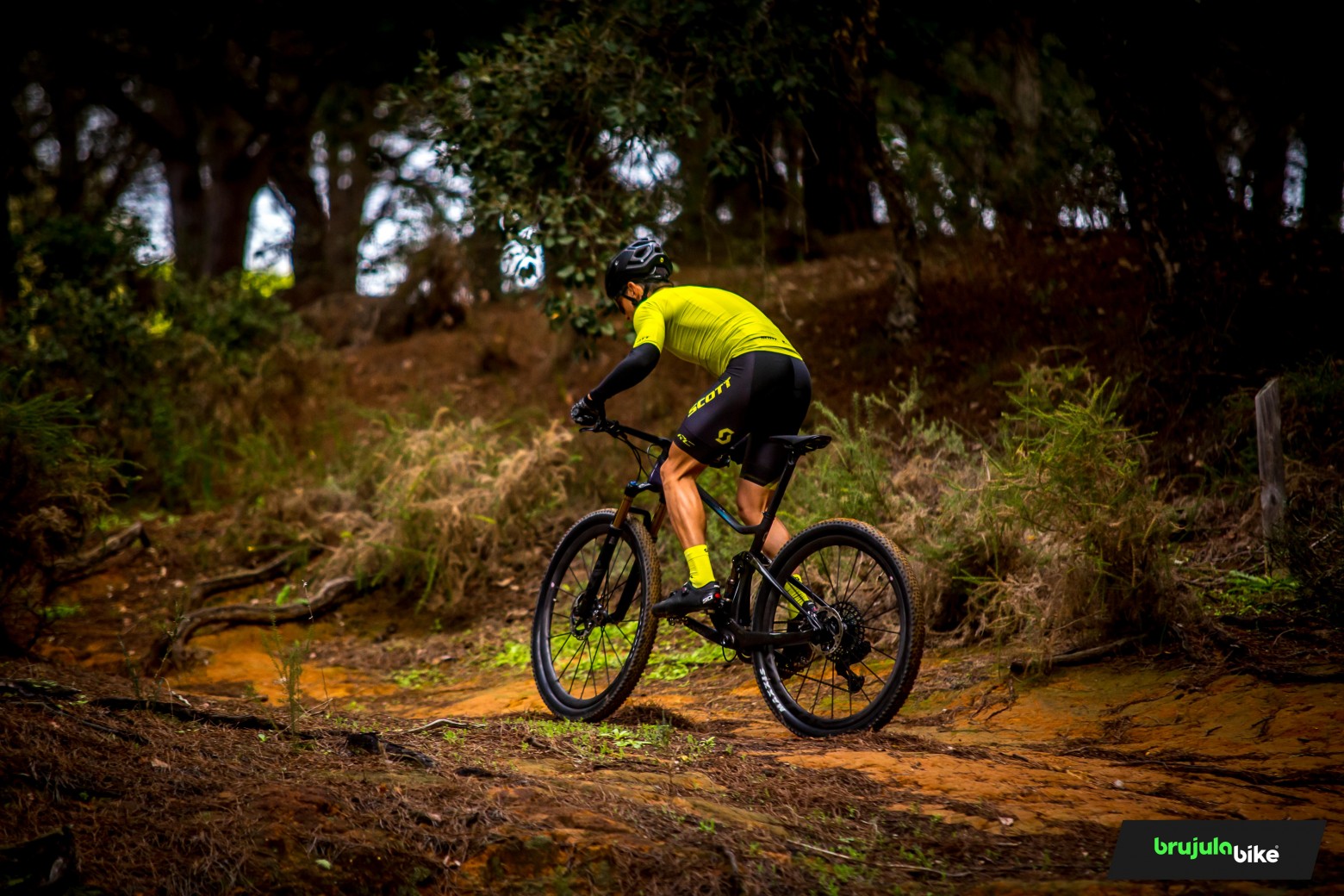 The starting point was a bike with a lower bottom bracket than its competitors with 319.5mm and a steering angle of 68.5º which, although it had already been relaxed compared to its previous version, it has been seen that the trend is for even greater releases in all disciplines.

This increase in fork travel throws the fork another half a degree or so and still leaves a fairly low bottom bracket, which translates into increased stability and poise.

As we have already mentioned, Spark's geometry and suspension capacity means that it gives the XC a confidence rarely seen on downhills. We open the Twinloc completely and obtain an extraordinary sensitivity, seeming also to have more travel than the real one, and we are only limited in strong slopes by the absence of telescopic seatpost. 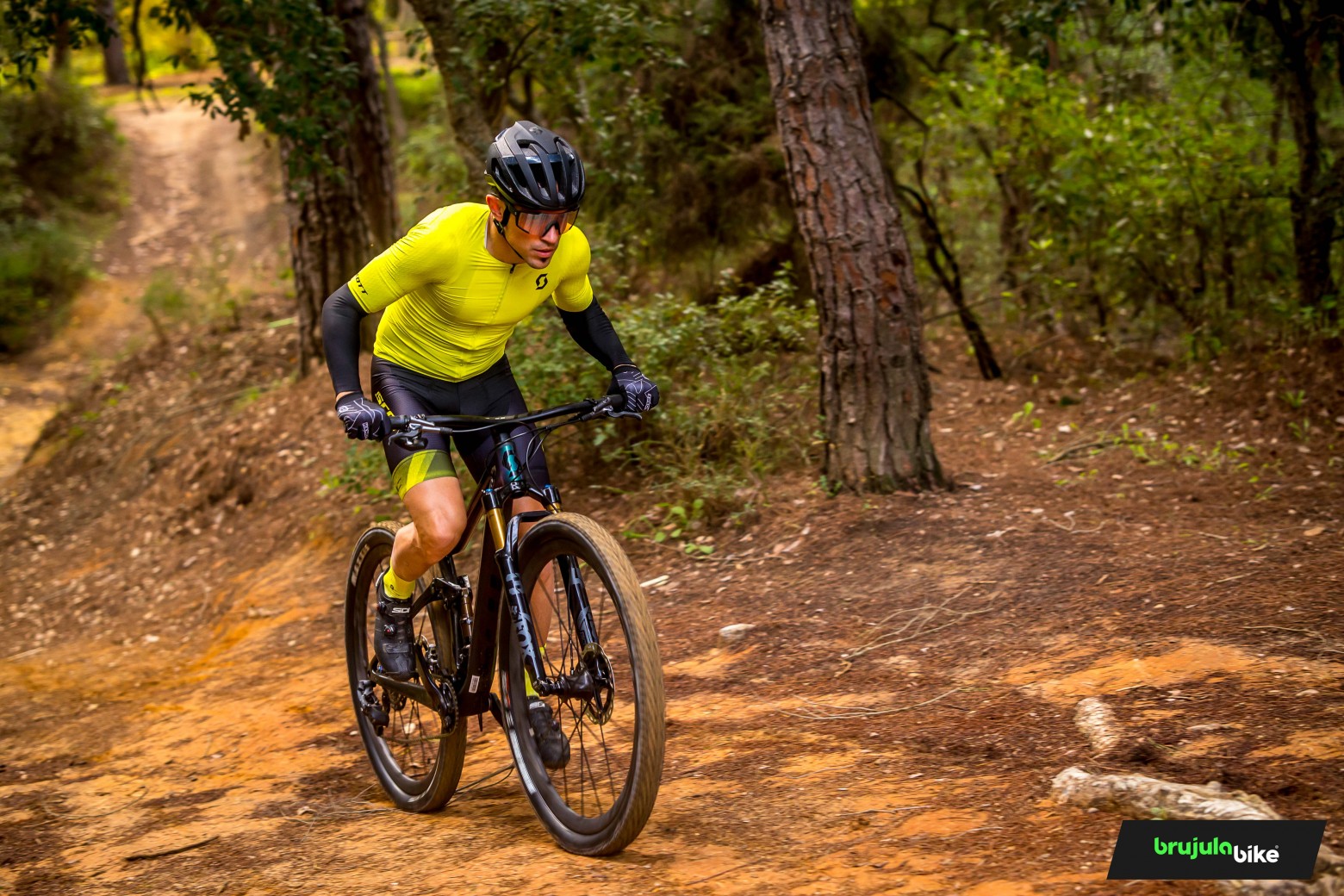 On very broken ground the Fox 34 SC Float Factory's tremendous stiffness comes to the fore, making it much easier for us to choose the right track and allowing us to pass more quickly than usual. And to these downhill qualities also contributes the confidence that gives us the Shimano XTR brakes, which despite being the XC version (there is the XTR trail version with 4 pistons), gives us more than enough power to stop the bike in any circumstance.

When it comes to climbing, the lightness of the bike and the Twinloc controller are our allies. As we have said, most of the time we use the intermediate position and this gives us traction that is difficult to overcome on steep terrain. But if the terrain is very favorable, we use the lock and it is a pleasure to squeeze on the pedals as we feel that every watt we develop becomes progress. The great stiffness of the frame and its Syncros Silverton SL wheels also contributes to this. 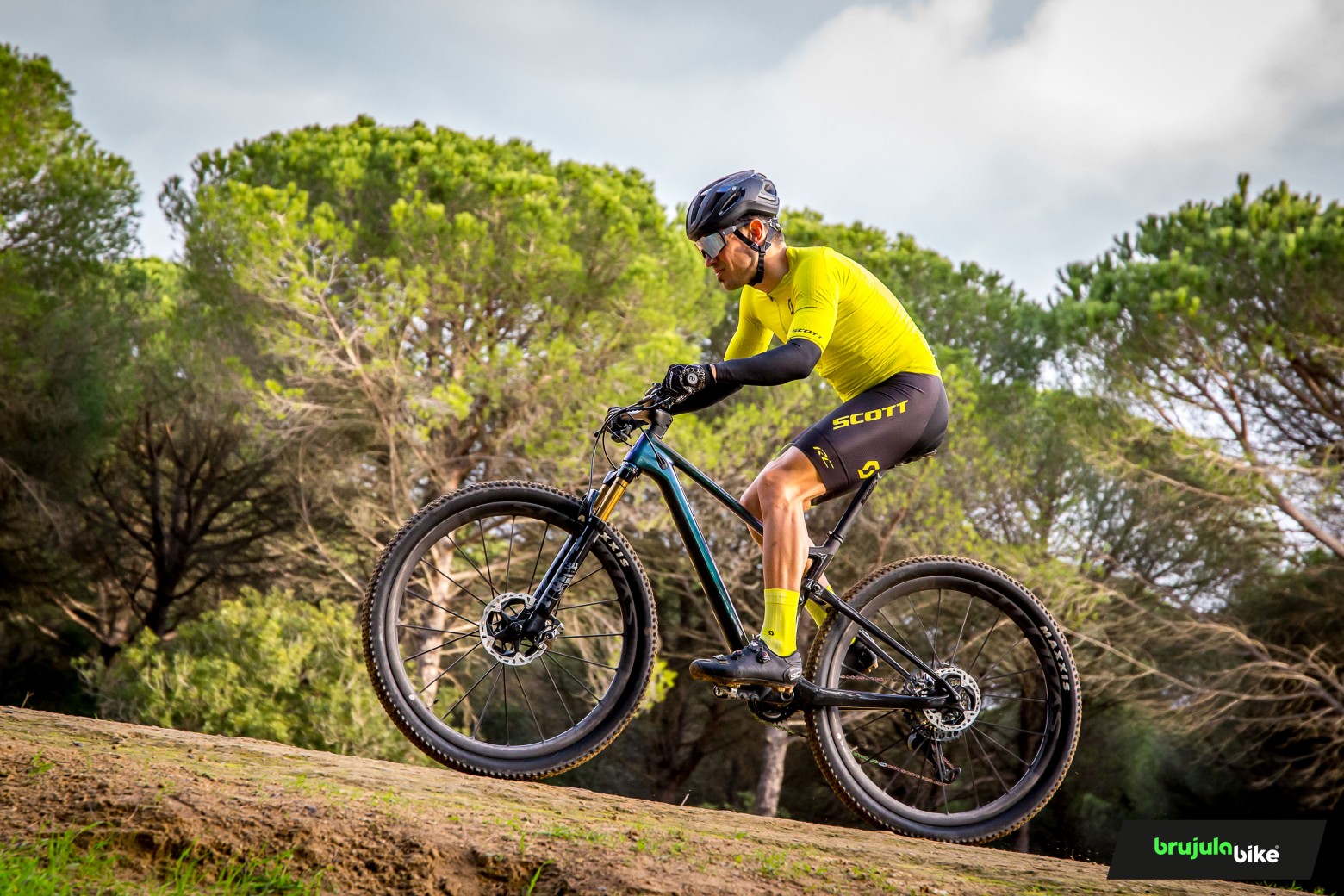 A curiosity that caught our attention is how silent the bike is. The general quality of the set combined with the one-piece wheels means that most of the time only the contact of the tyres with the ground is heard. 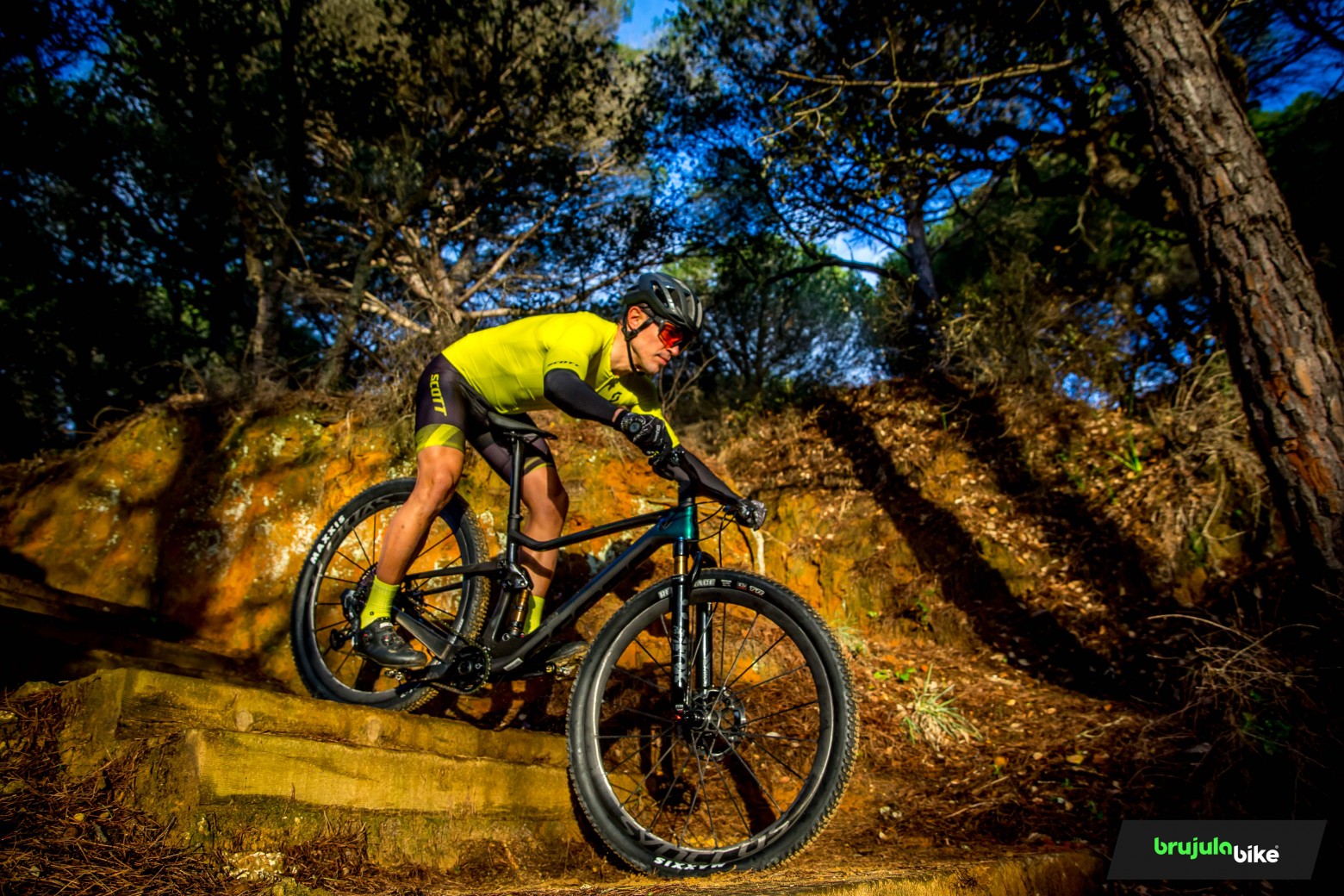 There are only two drawbacks to this fantastic bike. One of them is the absence of a telescopic seat post, which is a component that in our opinion more than compensates for the increase in weight that its assembly would entail. And the other drawback is something that some riders will care more than others, and that is the fact that it only supports one bottle cage. Marathon runners or, in general, cyclists who are not very keen on carrying a hydration backpack in summer, could attach some importance to this limitation.

Scott's jewel not only knows about racing

Our conclusions after riding this marvel for a while make it clear that this bike can perform at the highest level when it comes to wearing a bib and the heart rate at 200. You only have to take a look at its record to corroborate this.

But the Scott Spark RC 900 SL AXS is a much more versatile bike. The ride comfort it offers and the capacity of its suspensions make it an ideal bike for non-competitive routes. Riders who are looking for a bike that allows them to be as fast as possible but at the same time allows them to enjoy the trails have a serious candidate in the Spark. 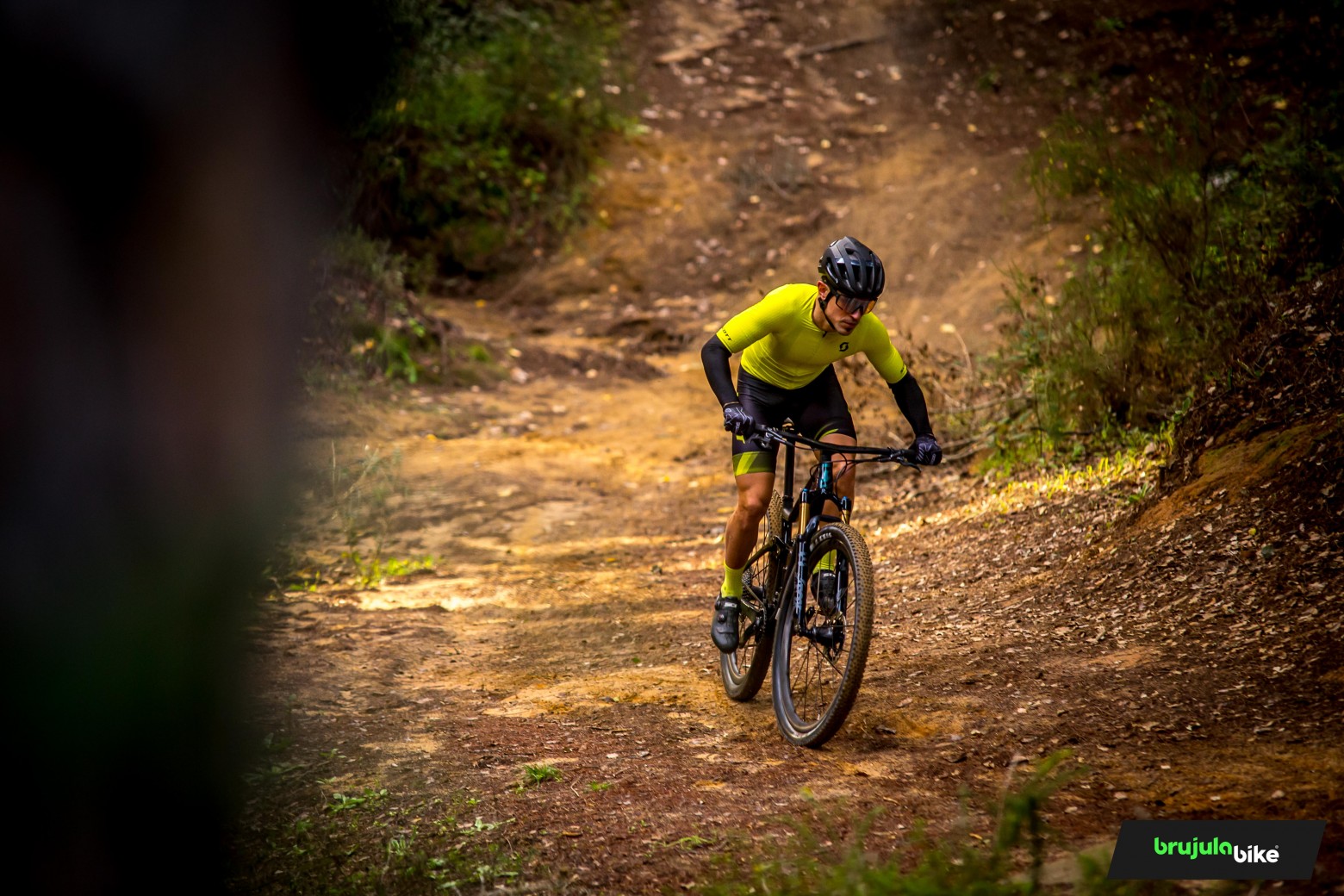 However, this top-of-the-range model is reserved for the most exclusive pockets. Most mortals will have to settle for their smaller siblings. The Spark RC range is very wide and its entry price is 3,349 euros. 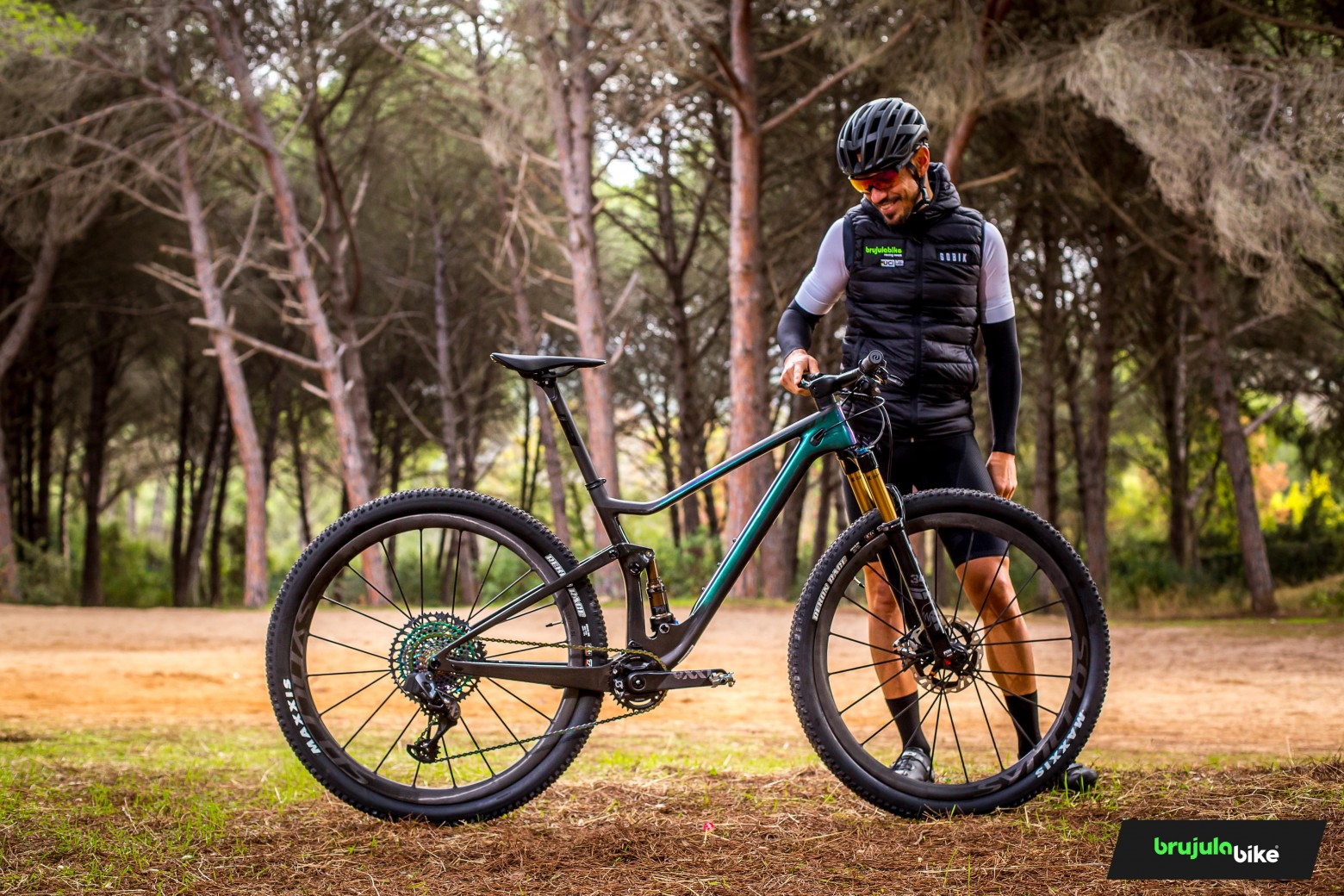