Van Aert and Van der Poel arrived as favourites in a race that was the last classic of the season after the cancellation of the Paris Roubaix.

First part of the Tour of Flanders: Van Aert and Van der Poel saved their forces

The race started with the traditional unproductive escapes. These are good minutes of glory for many cyclists. Now, 200 kilometres to the finish line, 6 riders got into the first getaway of the morning, while from behind, the peloton appeared agitated, to the point that riders like Vermote tried to attack in order to get away too or to wake up the multicoloured snake from its lethargy. 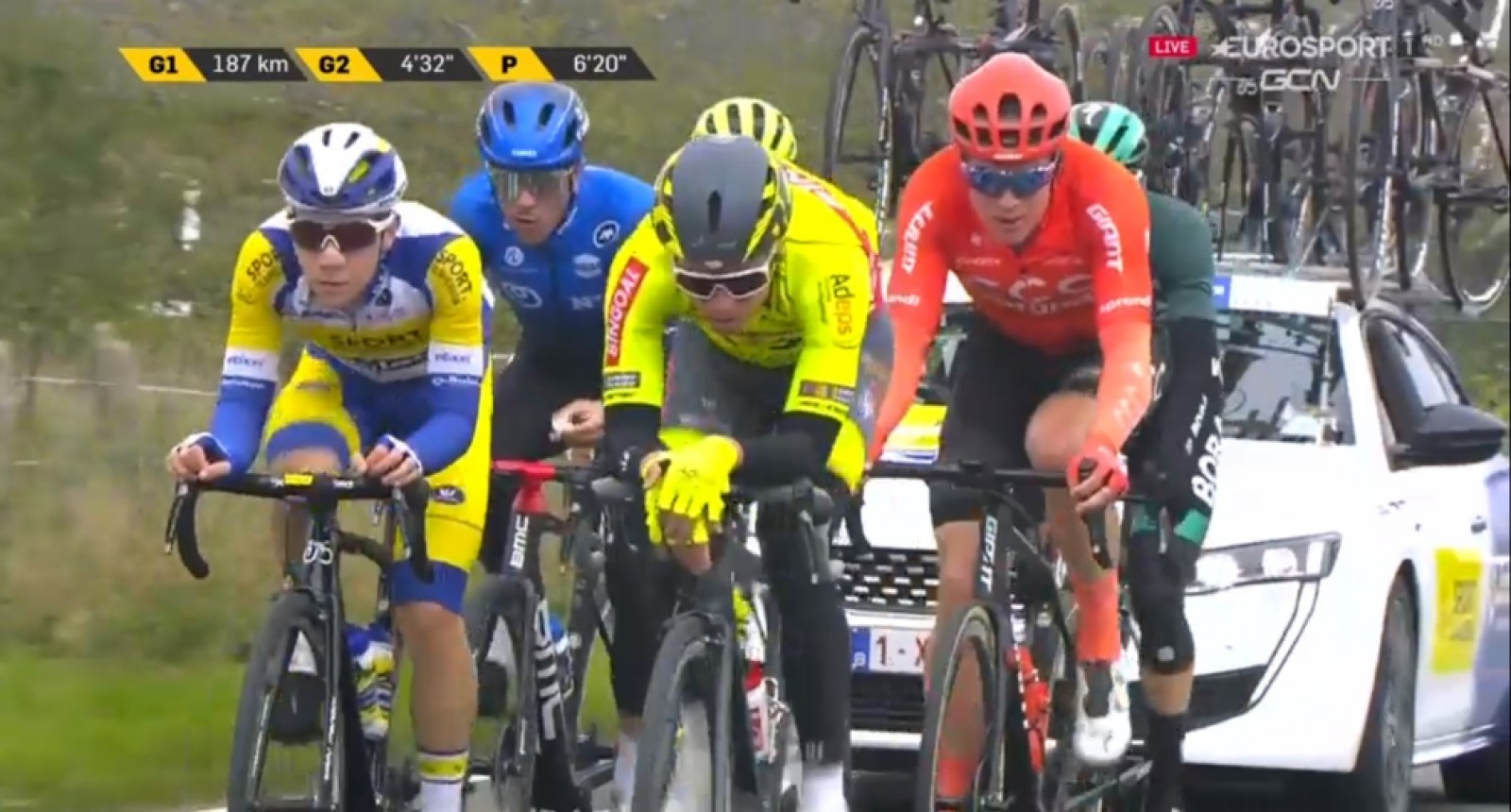 But there was no hurry. The favourites knew there was a world ahead. And they had no idea how much that world was going to mean. The first to go to the ground was Gregor Muhlberger. The one from the Bora team made a bad catch from a nutrition bag and touched asphalt. The first of many, some even favourites. Because at 113Km to go, it was Van Aert who was going to the ground. Knowing the final result, we are aware that it was not much, but the scare was tremendous when the cameras came and saw in the road a Van Aert who seemed to suffer from his left shoulder. 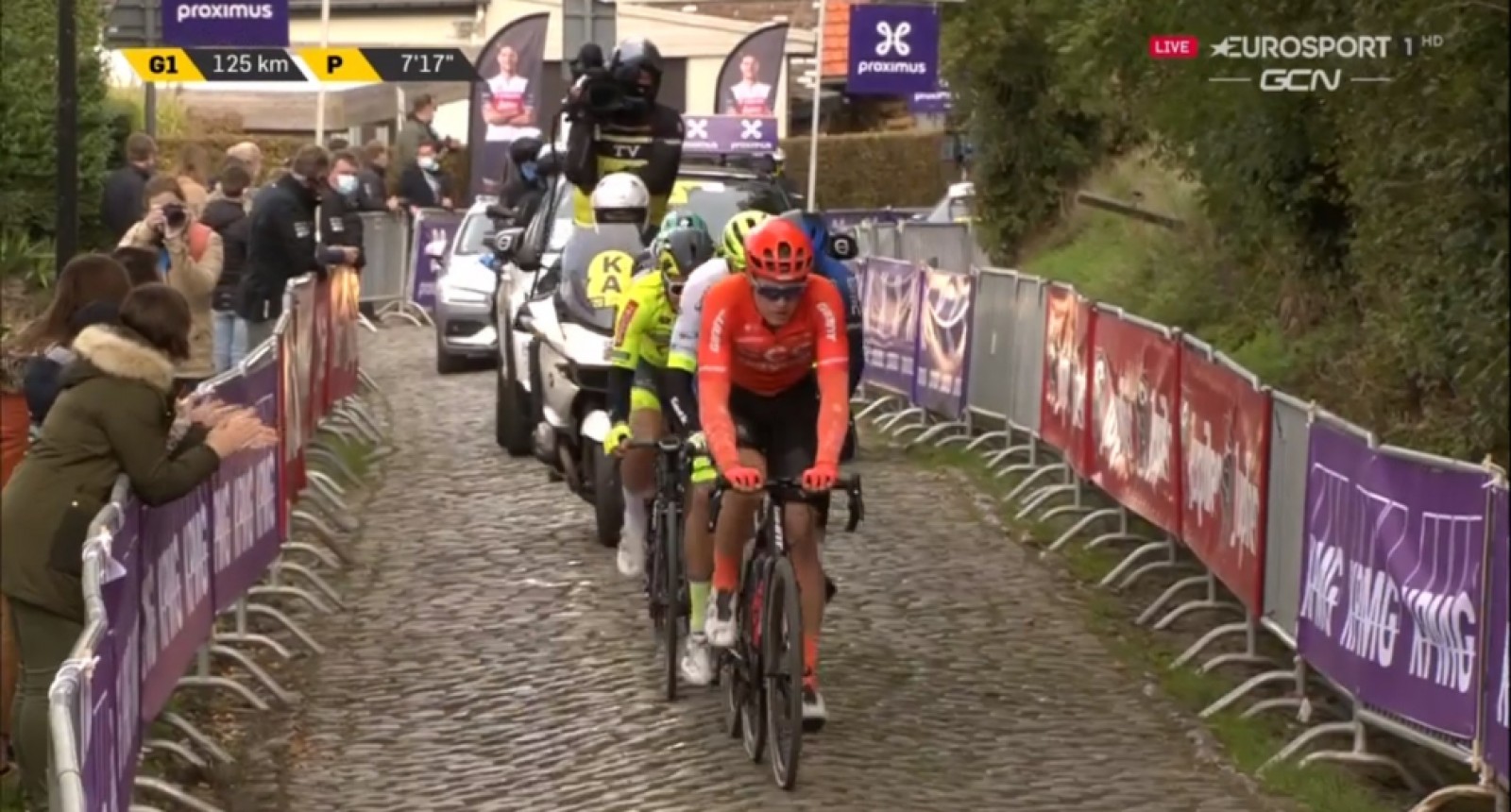 But nothing further from the truth: a couple of colleagues waited for him and he was soon rejoined the peloton.

The head of the race still had a certain difference, but it was insignificant considering that there was still a lot to compete for, even more so when the rain appeared at around 100Km to the finish line.

Oude Kwaremont-Pateberge was to decide the race, a 243-kilometre event with 17 ports and 14 paved sections. A paving that would also decide who was not going to win, above all, because it usually acts as an infallible filter for those who are weak, who not only have to focus on pedalling, but also on maintaining their balance. We all know that the more exhausted you are, the more likely you are to fall. 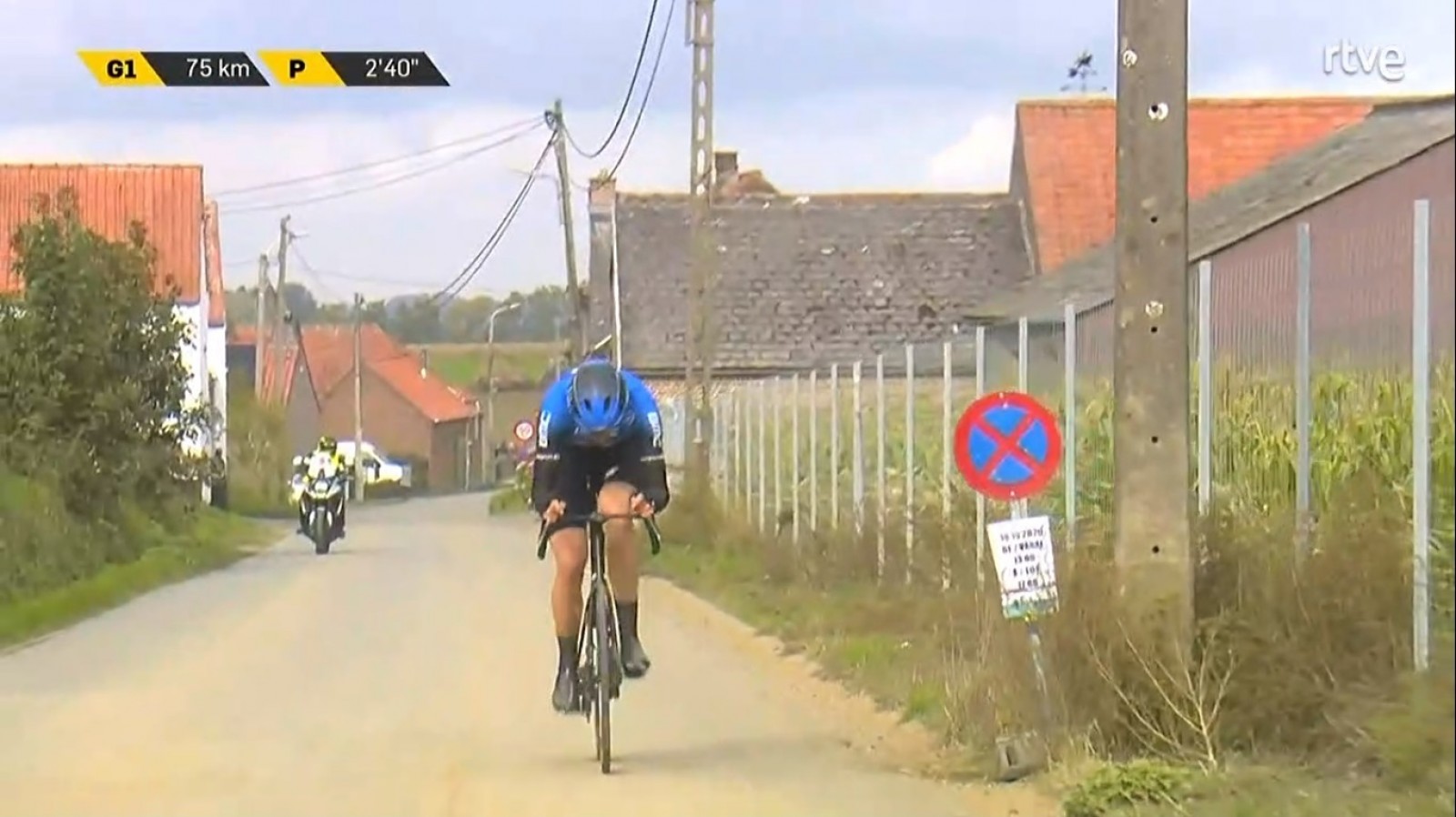 With the rain, these options multiplied. And also the attempts to attack. Wellens or Declerck were trying, but the pace of the peloton under the command of Mitchelton Scott was not only undermining these attempts, but also served to neutralize Hagen and, more importantly, to gradually drop half a peloton.

In the following kilometres, the falls due to fatigue followed one another. Some, without clear aspirations for victory, like those of Sep Vanmarcke or Dimitri Peykens. Others were more painful: Alaphilippe suffered an accident in his first participation in this 2020 Tour of Flanders just when 10 kilometres earlier he had escaped with Van der Poel, although Van Aert would end up catching them in an incredible trio. In fact, before the race, they were the three favourites. 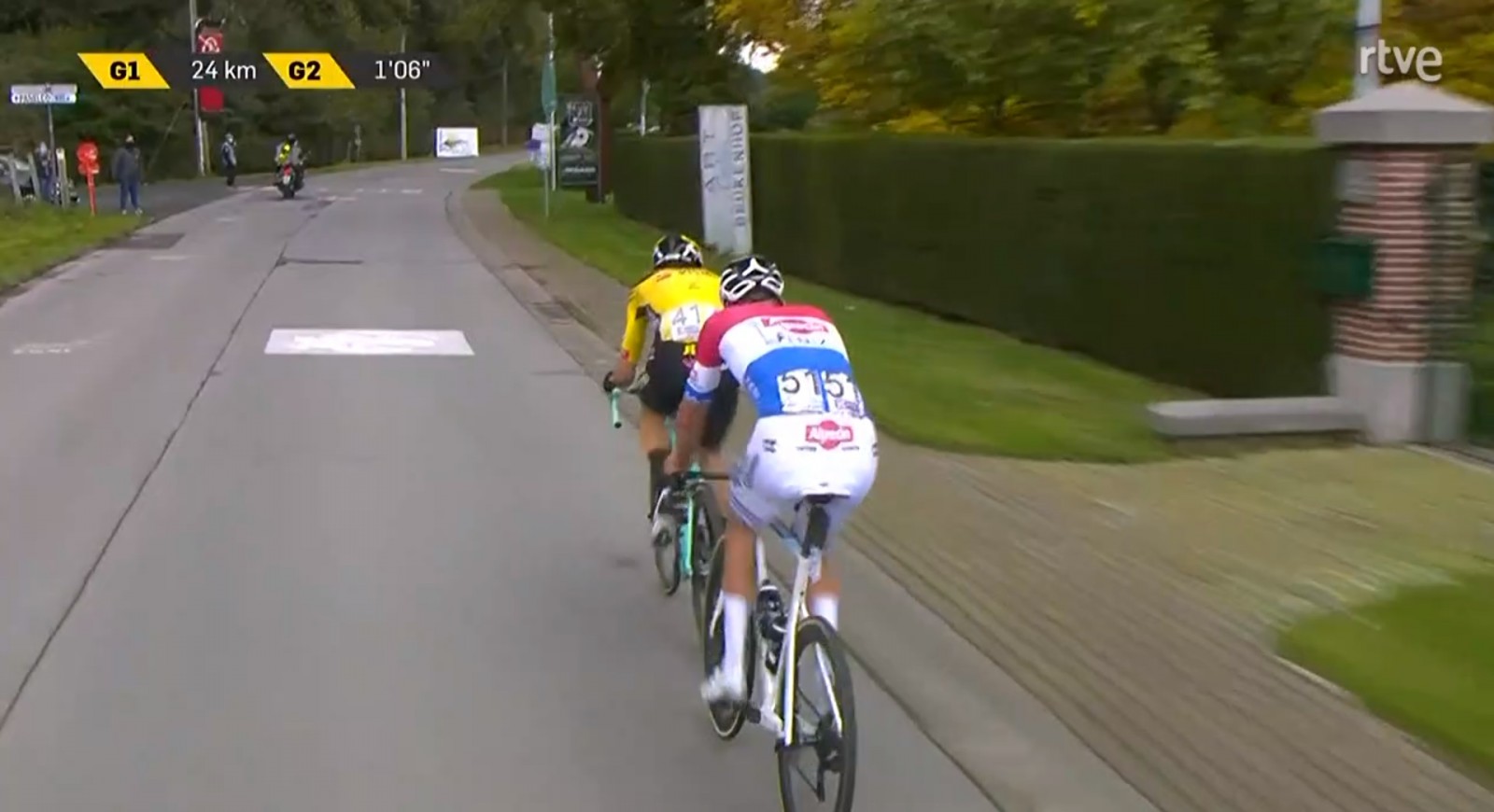 It is really a nonsense what happened to Alaphilippe. The Frenchman looked good, but he ate a motorbike from behind. Literally. He hit it when it seemed to be fitting his jersey and went to the ground. The season ends for him in a sad way, let's hope the damage is less than the fright. 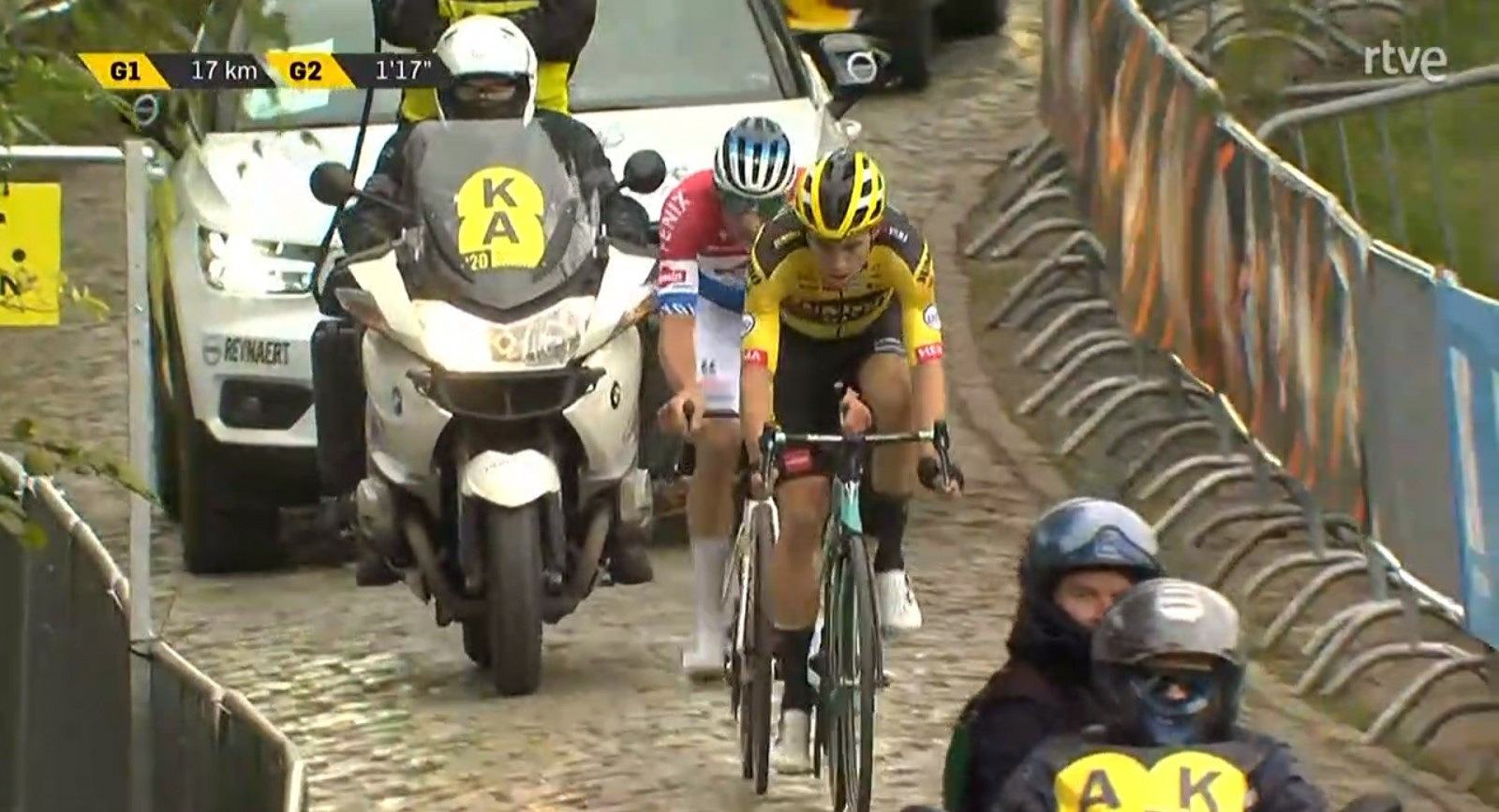 What is significant is that the two roosters were left alone, face to face. And they decided to collaborate. It is incredible what this sport provokes: two enemies and rivals collaborating with relays to increase their distance from the peloton. And they did it well and succeeded: with 15 minutes to go they had more than 1 minute with respect to the peloton. 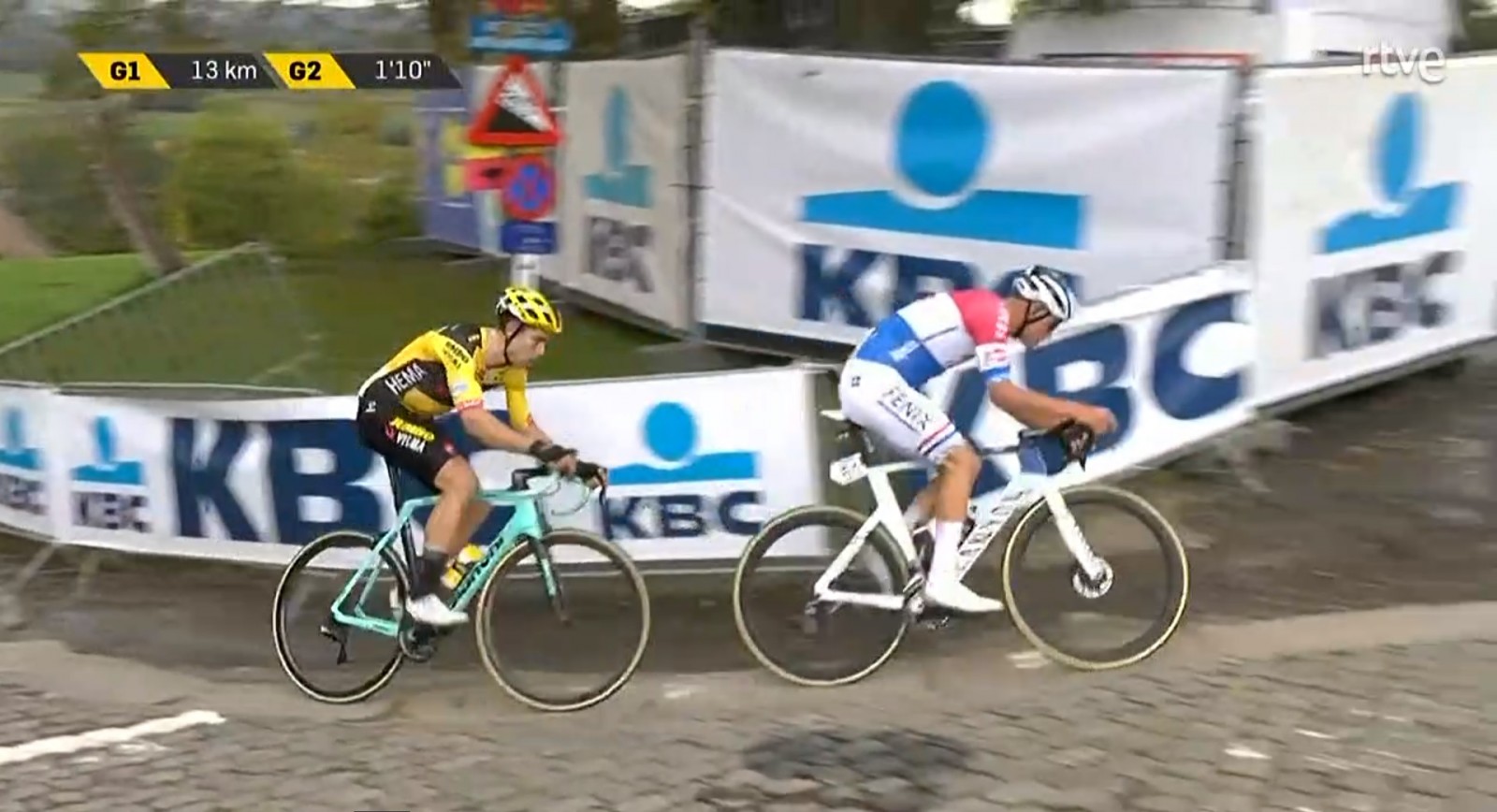 In the paved area the vibration was felt in the arms of the cyclists. Van der Poel stuck the wheel into a paving stone and brushed against the fence. His experience in cyclo-cross came in handy, because maintaining that balance is not typical of the road. 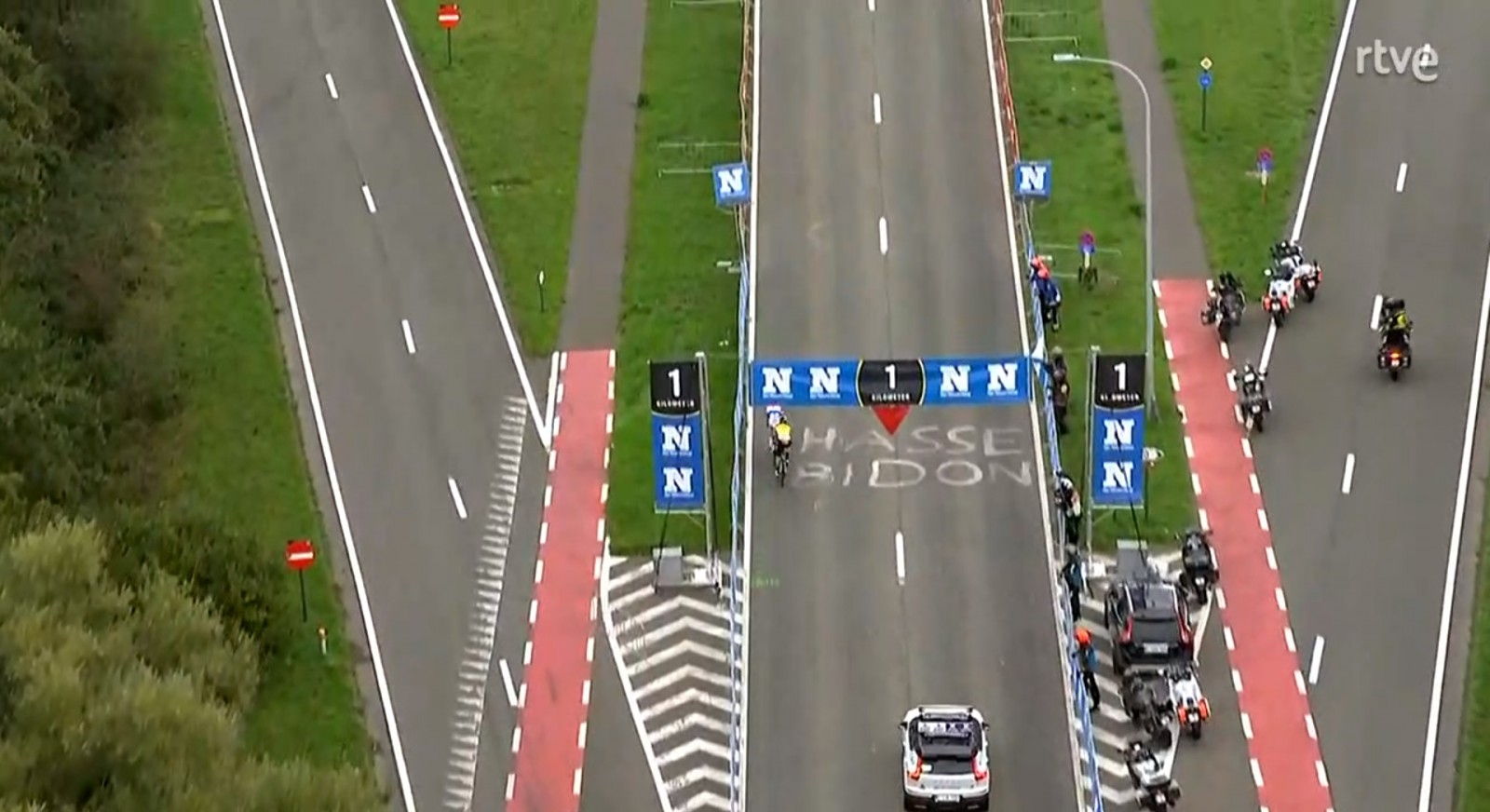 In summary: 15Km for the finish line and a double prize for Van Aert and Van der Poel. Win the 2020 Tour of Flanders and beat your arch-enemy. The runner-up at Imola against the Triple World and European Cyclocross Champion. Van der Poel was trying to get Van Aert off the last wall, but the Belgian was sticking to the wheel and not suffering from the Dutchman's pace. Everything was going to be solved in the sprint, a facet that clearly benefited Wout Van Aert. 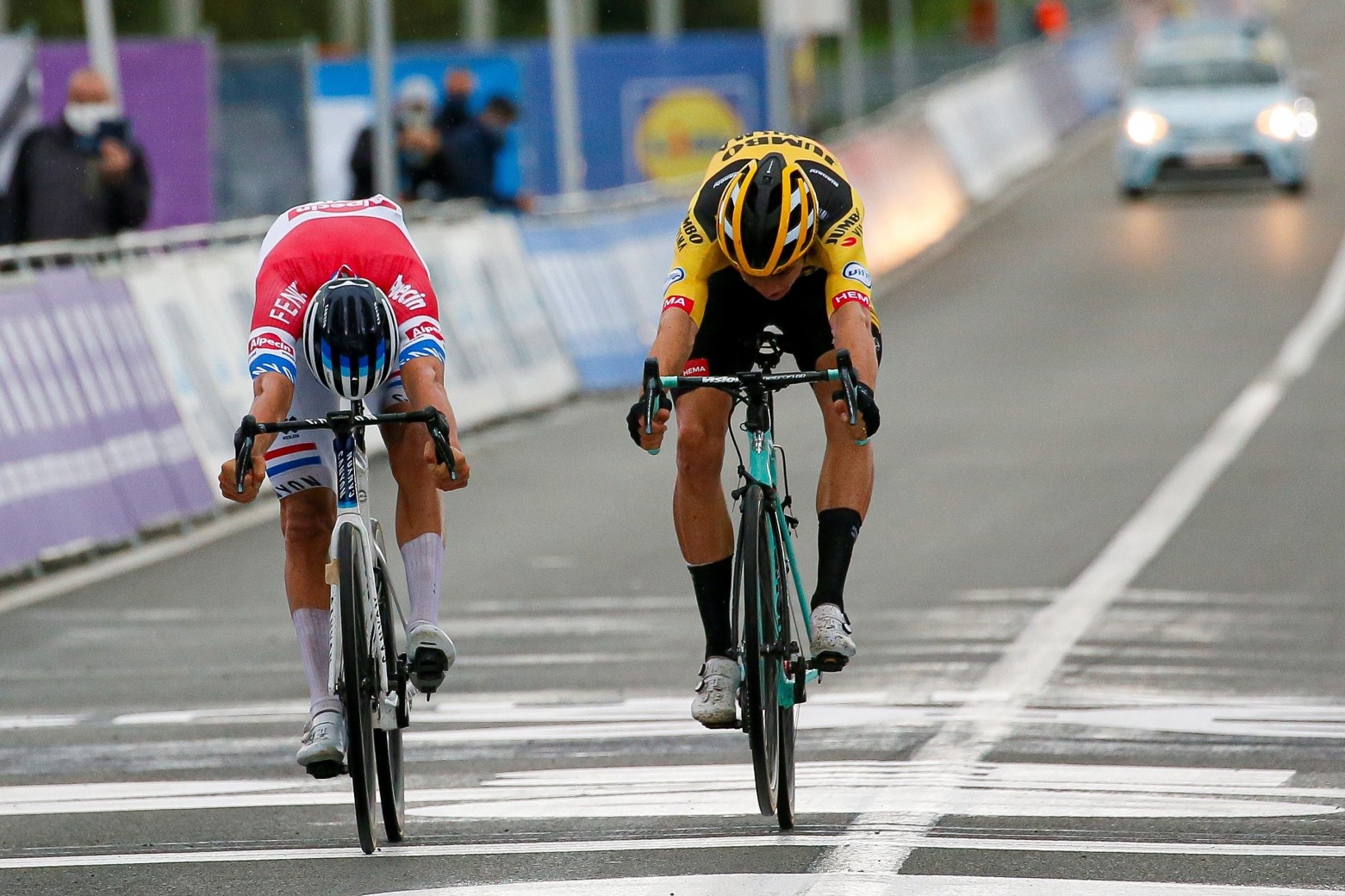 But Mathieu Van der Poul is a guy who never ceases to surprise us. If he already beats a specialist like Van Aert at sprinting, turn off and let's go. He proved to be more intelligent: he took the lead, kept control of it and hoped to reduce and narrow the distance to the finish. At 200m to the finish line Van Aert was starting but Van der Poul was doing it in time. Paired up, they entered the finish line stretching their bikes and the victory of the 2020 Tour of Flanders was for Van der Poel by just a handful. Unbelievable for a young cyclist who imitates his father. Where is Van der Poel's roof?