The day began unusually with the first losses before the race even started. The UCI's security protocol was working and they detected Lutsenko's positive. The cyclist from Astana remained in quarantine and did not take the start. 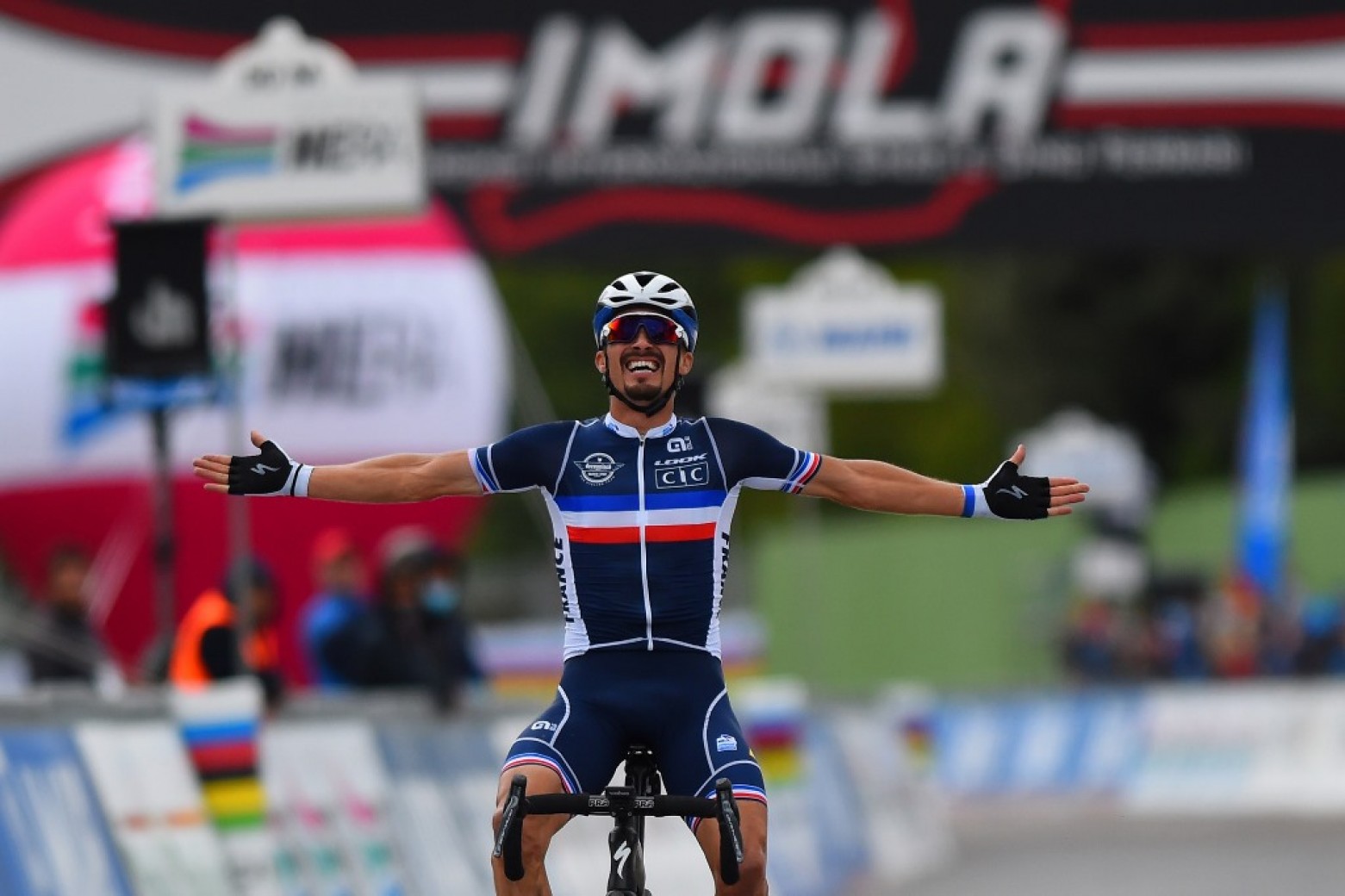 Summary of the World Championship 2020

After the first loss, due to the coronavirus, the day began with a couple of laps around the circuit with a few attempts to escape, but not much. Nothing scary. Passing by the Gallisterna Peak with the Switzerland national team at the head reducing any escape. Obviously, Switzerland trusted Hirschi, although he would end up deflating himself. That escape did not have much credibility and even little by little the cyclists were deflating and slowing down, falling off and being absorbed by the peloton.

Actually, until 100 kilometres to the finish line, things didn't get serious. The peloton set a hellish pace and little by little the less fine cyclists were losing positions. And who was hardening the race? Of course, the French team that was also protecting Alaphilippe.They were preparing the ideal race for Alaphilippe, something that would come out perfectly. At 70 kilometres from the finish line, this pace finally put an end to the escape. The rainbow pack was heading for the final stretch and the group had become quite small.

In the meantime, the cyclists managed to avoid complicated situations, such as the change of bike of Pogacar about 60 kilometres from the finish line, which caused him to lose contact with the leading group. But the Slovenian, the current winner of the Tour de France, showed his strength and re-engaged. In fact, he even attacked at about 40 kilometres to the finish. The Slovenian was one of the most combative, if there was a red jersey he would have taken it. 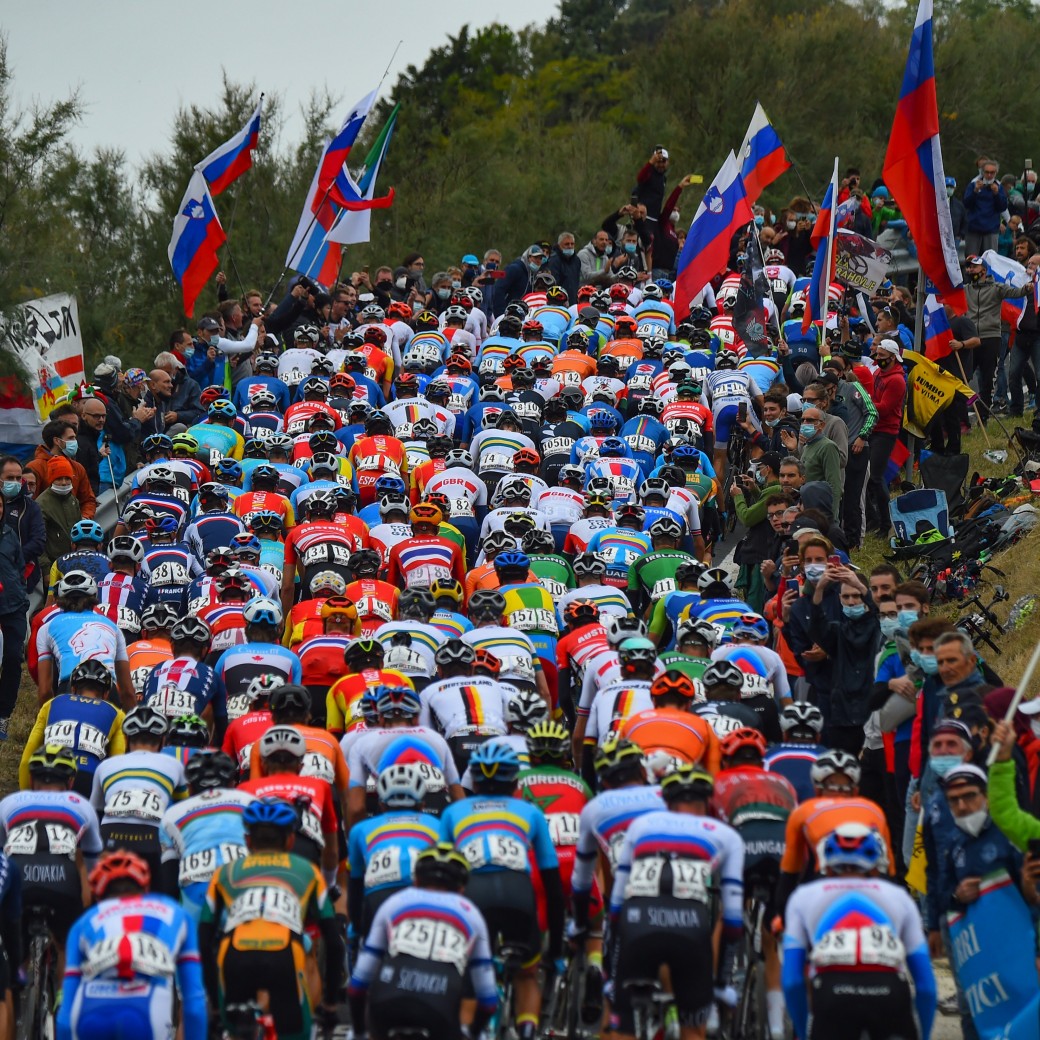 But Dumoulin and Landa managed to break down Pogacar's aspirations. Very well the Spaniard, who joined a strong group formed by Nibali, Landa, Van Aert and Urán. But among them, in the last uphill to the Gallisterna, the very great figure of Alaphilippe emerged. There were about 15 kilometres to go and there was still hope of catching him.

But we already know how Alaphilippe descends. He opened 4 more seconds downhill and planted himself in the last 10 kilometres with about 13 seconds advantage. The indecisions from behind presaged his victory as well.

And what was predicted in the last half hour became reality. Just like Alaphilippe's dreams. 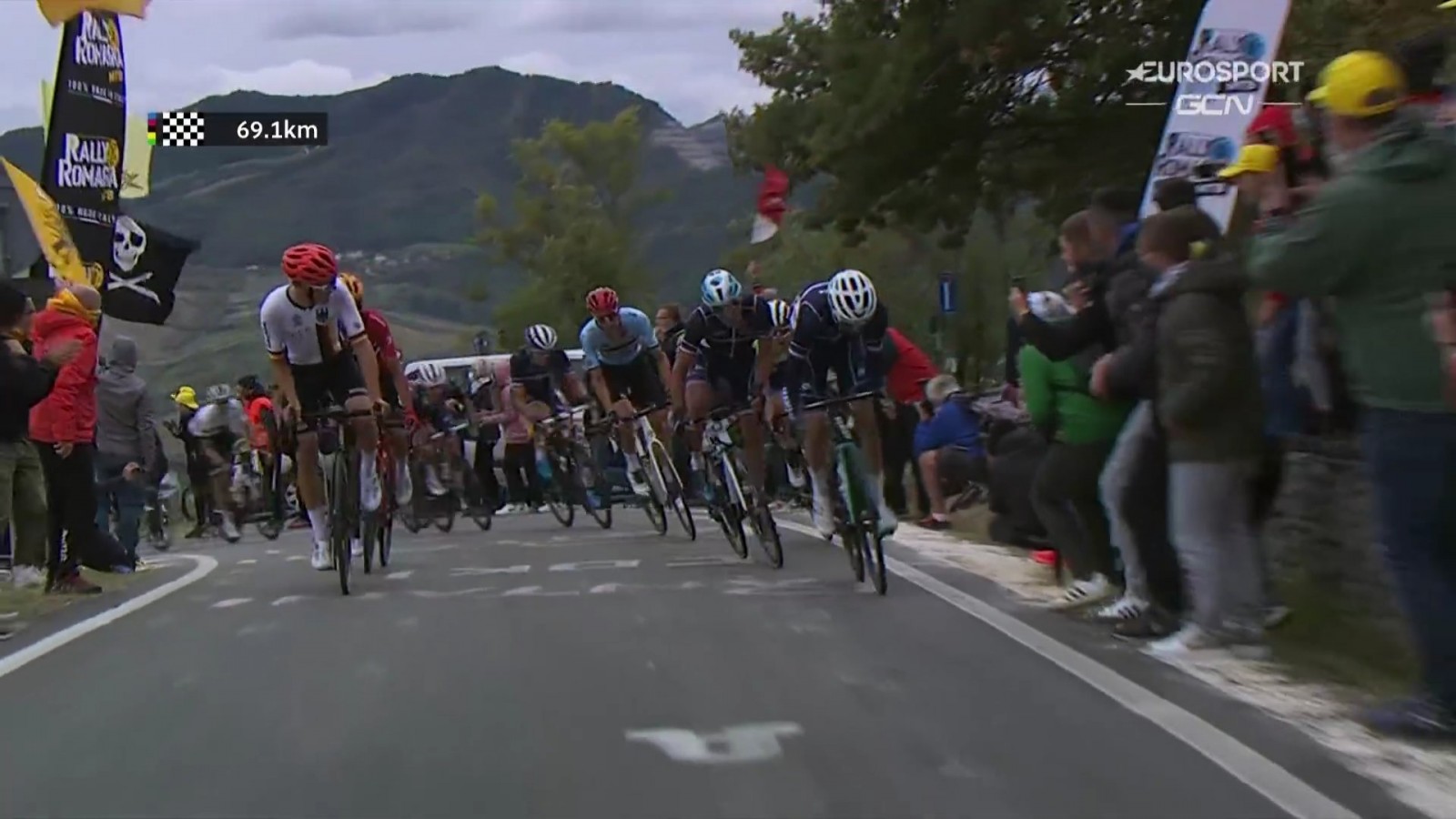 Alaphilippe is covered in gold at the Imola World Championship

It was impressive to see how Julian Alaphilippe entered the finish line. For many reasons. Because of the great cyclist he is. Because this circuit was for him, although last year he also started as a favourite and ended up being defeated. Because he has made history and because nobody doubts that he deserves it. But above all, to see him enter the finish line was exciting because he entered crying. 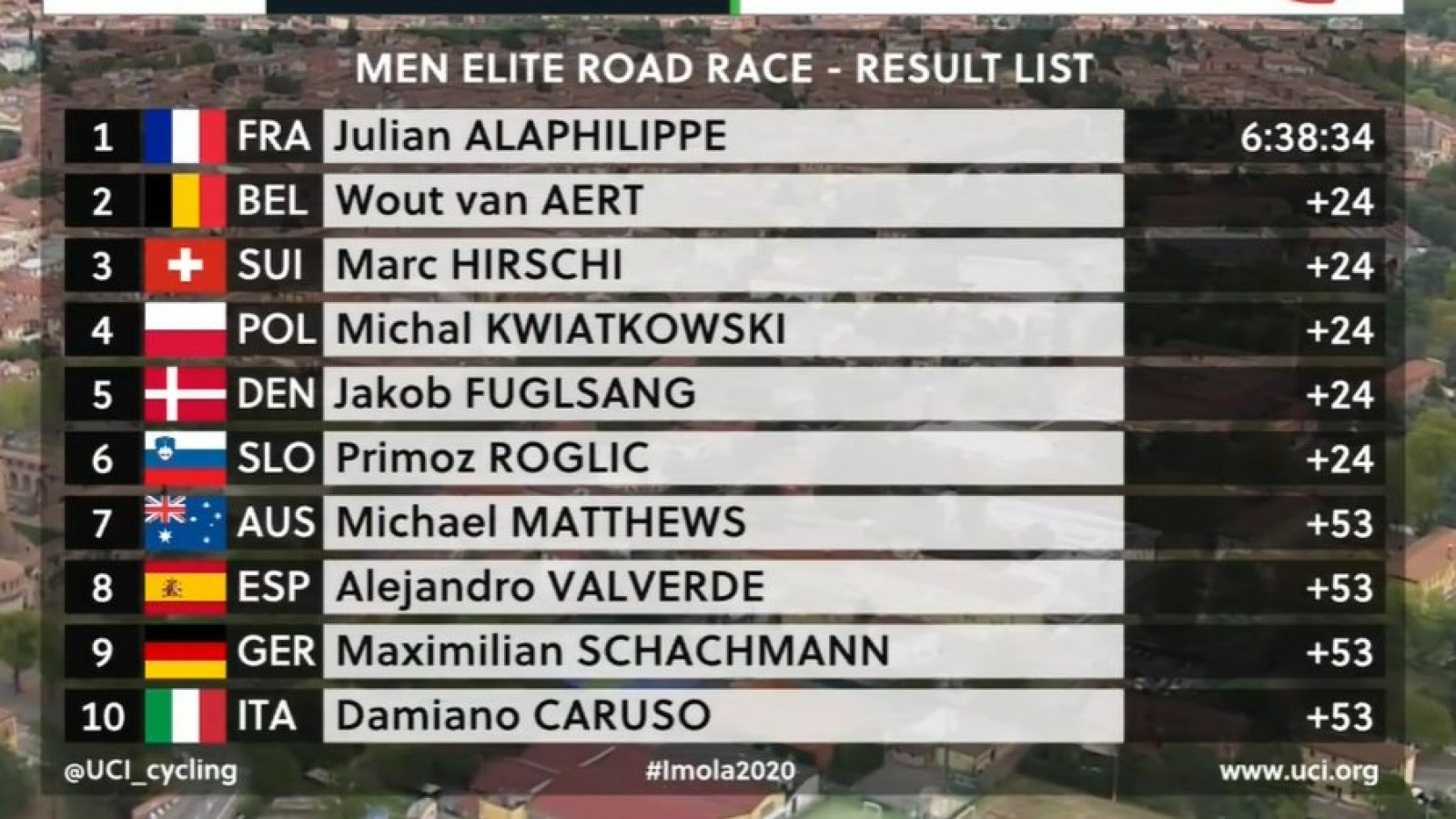 Rage gestures, hands to the head, punches in the air and tears on the Frenchman's face. Let us remember that his father died a few weeks ago during the Tour de France. Surely he had this in mind when he was taking the last corners of this circuit of Imola which was a stage at the height of the champion. 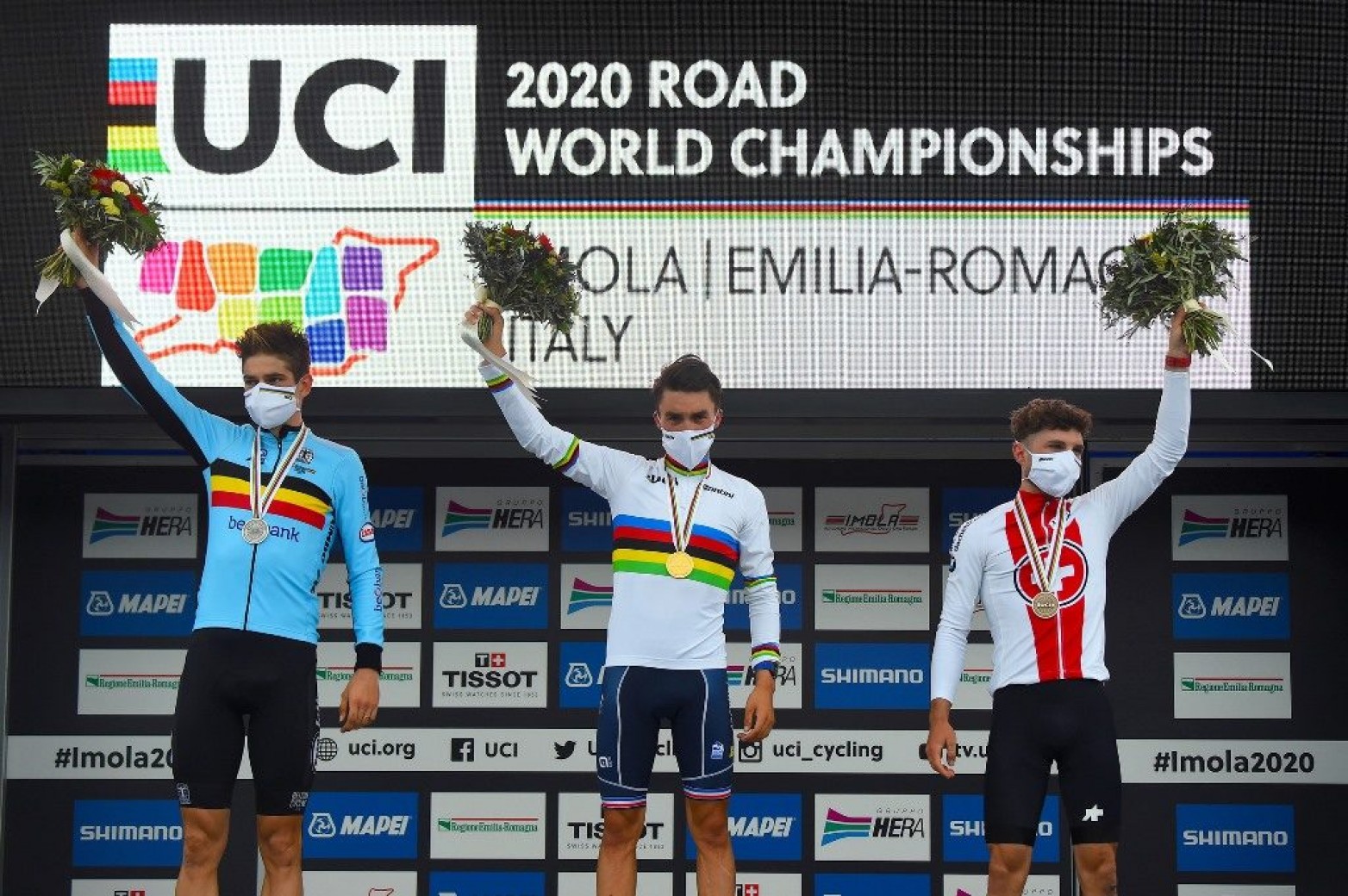 Brilliant Alaphilippe, which becomes part of the exclusive rainbow club.

Behind, in the chasing group, no one fought with Van Aert. He took the silver in the sprint. So the only thing left to do was to settle the bronze, which Hirschi took. The Swiss driver went from bad to worse in the sprint, but he managed to keep the metal in the face of the approaching mordant. They entered at 24 seconds finally.

Good performance from Spain, although as always, there is a lack of a cyclist with a winning profile. A champion. In fact, that champion aura was only kept by Valverde, who entered at 53 seconds and was the first Spaniard to cross the finish line.