Today we review one of the most revolutionary bikes of recent years, the Cannondale Topstone Neo Carbon. Gravel and electric in an excellent combination from which we expect a lot. Here's our verdict, the best and the aspects that could be improved. 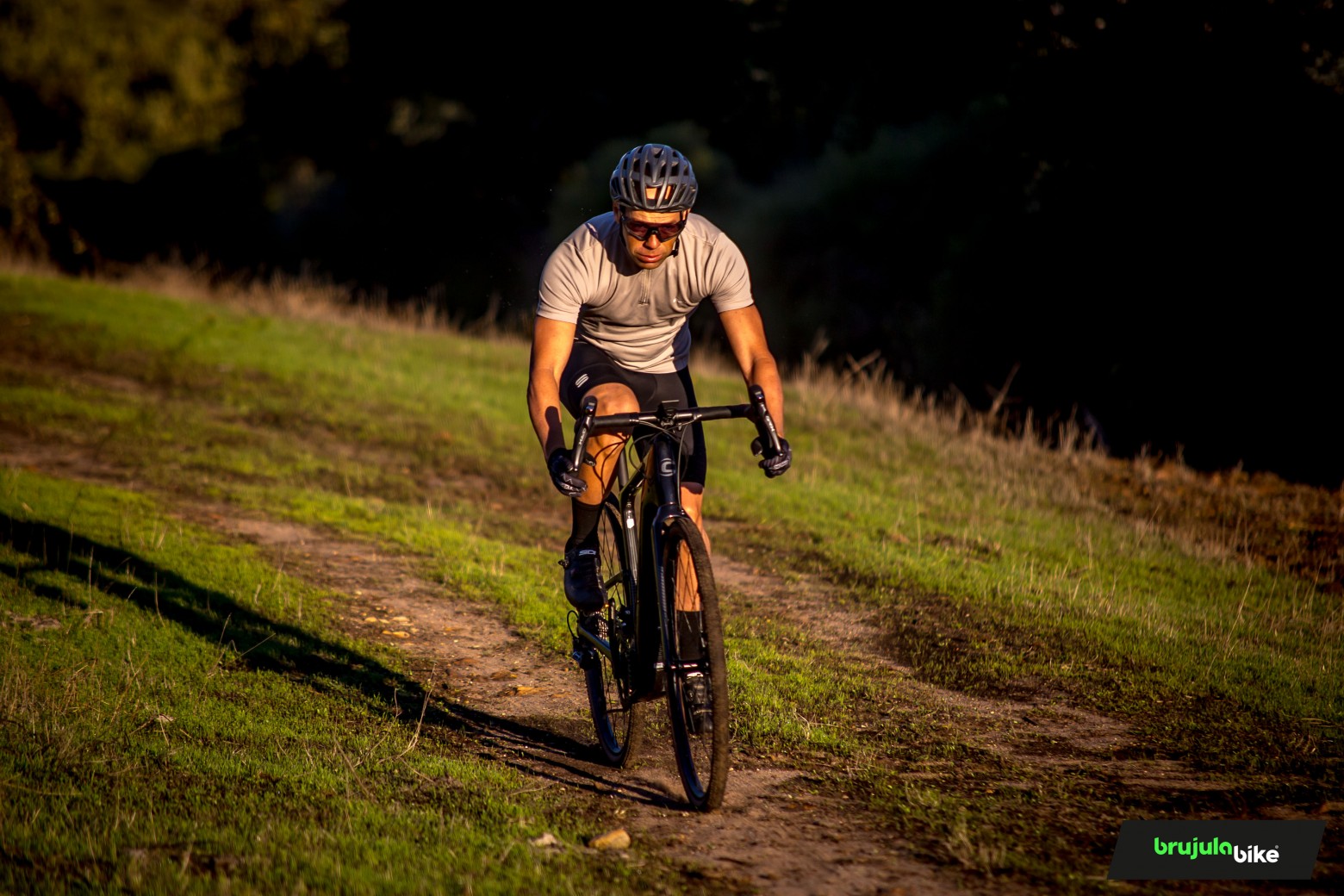 At first glance, even before we took a single pedal stroke, we could see that this was going to be something different. We had never tried such a novel combination of gravel and electric bike before. Both separately, dozens of times, but this cocktail was a real unknown for us.

We evaluated the Cannondale Topstone Neo Carbon on the first day and, at a glance, we saw that its construction is more than well conceived. This gravel bike is so well designed and packaged that, although you can tell it's an electric, it would go unnoticed in a rider's path. The frame's down tube is the only one that's noticeably thicker because of the 500Wh Bosch battery. 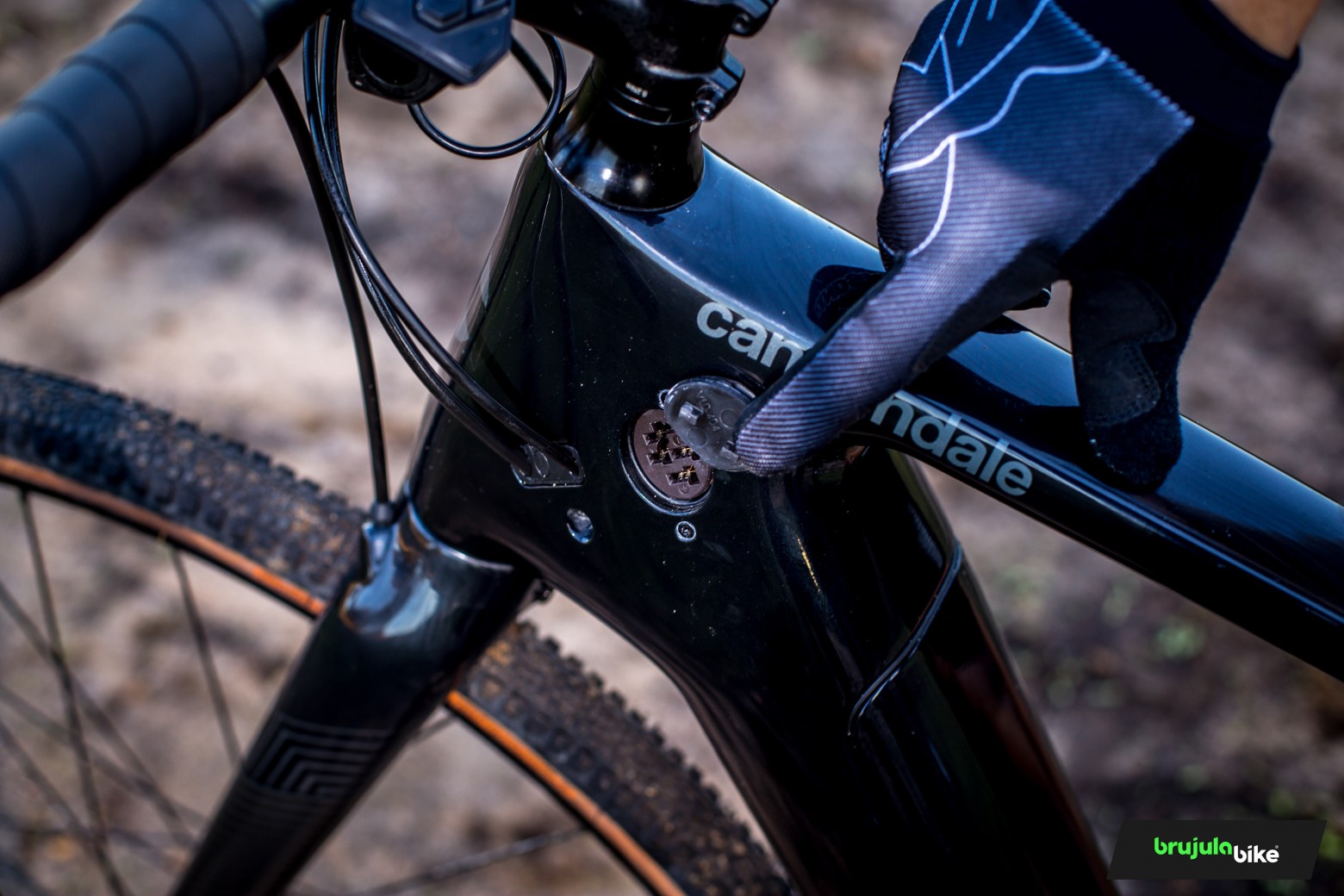 But it's even more than that, because very little is needed to move it. Its frame weighs less than 2 kilos, so the rest of the weight is provided by the components but, as we say, neither of these two factors has been fulfilled in any of our rides: we have not used the turbo mode except to test it and not because we needed to; and we have not run out of battery. We will comment on this later. 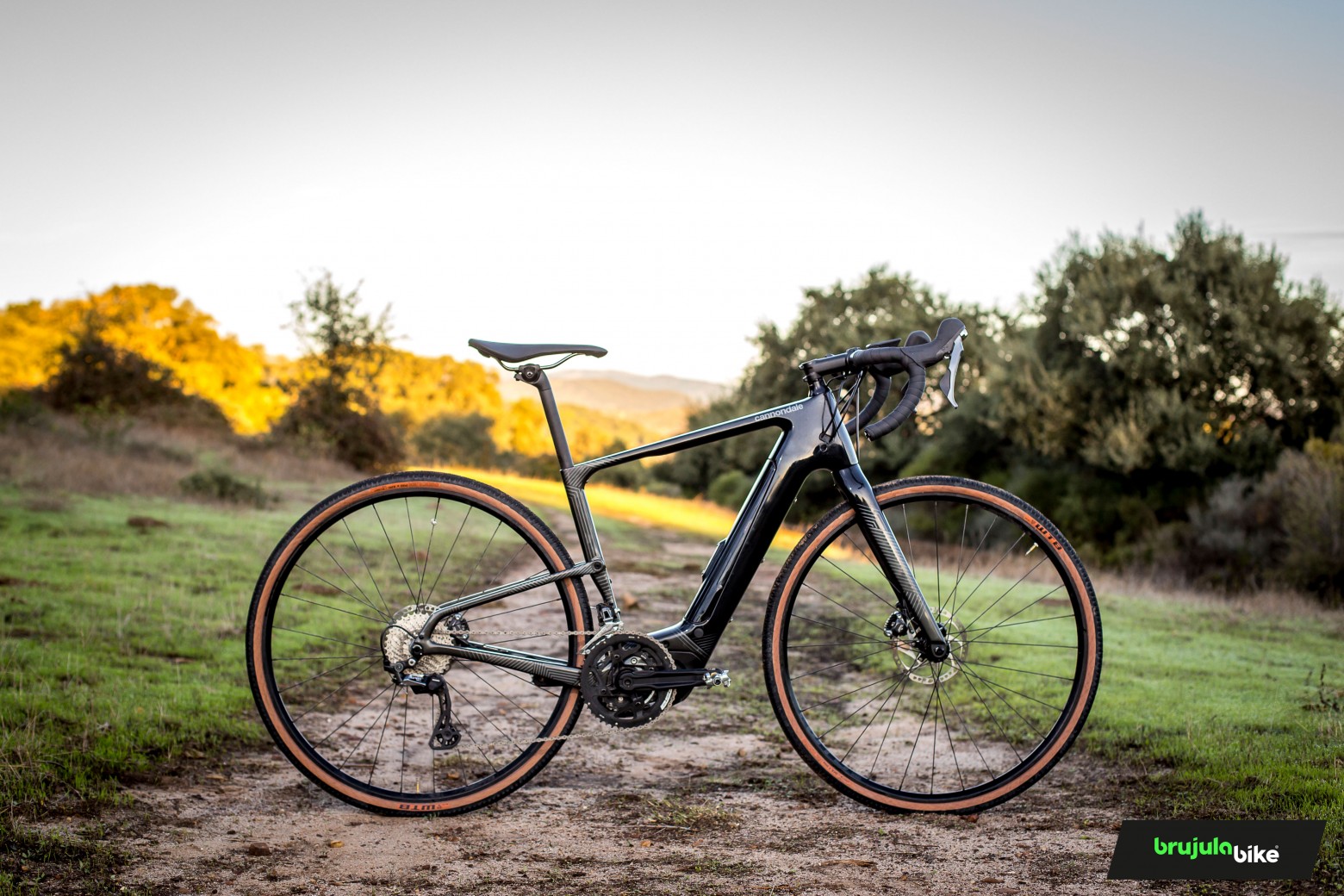 But to begin with, three details regarding its aesthetics. The first one that caught our eye is the on-board computer. It's excellent. So fixed that we thought it could not be removed. You have to pull it very hard to get its magnet system to let you take it out. And its fit is super-measured. So if you leave this device pointed at it, it goes in place; and there are no worries about it slipping out in the middle of the ride. It's great, because you can handle it without any problems but at the same time it's very safe. 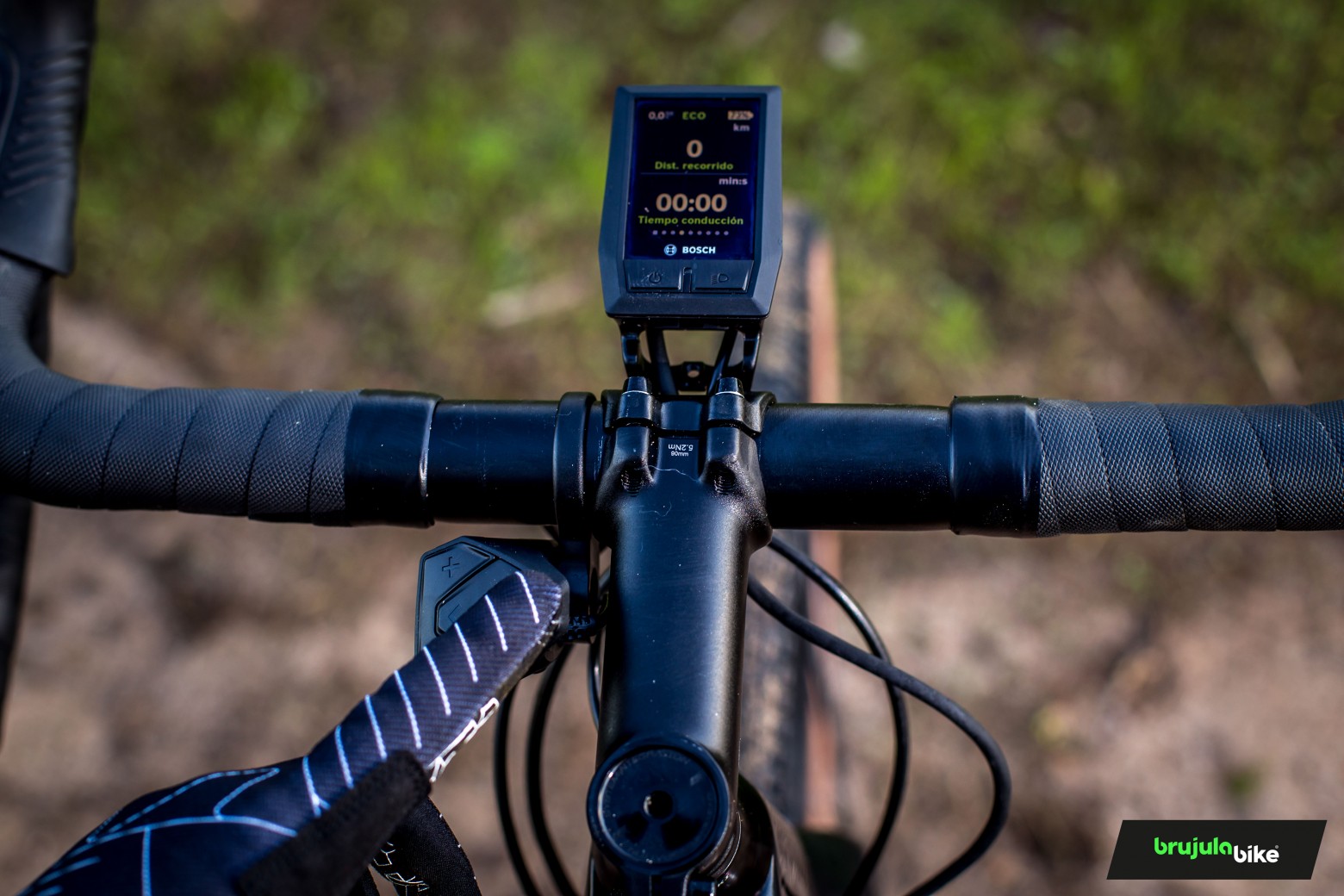 Secondly, the handlebars. The handlebars have an increasing opening at the bottom, so they make the handling much easier. It's very well designed, because we're not going to be riding on roads, where this handling is not so necessary, but on steeper terrain it gives an extra point of control. 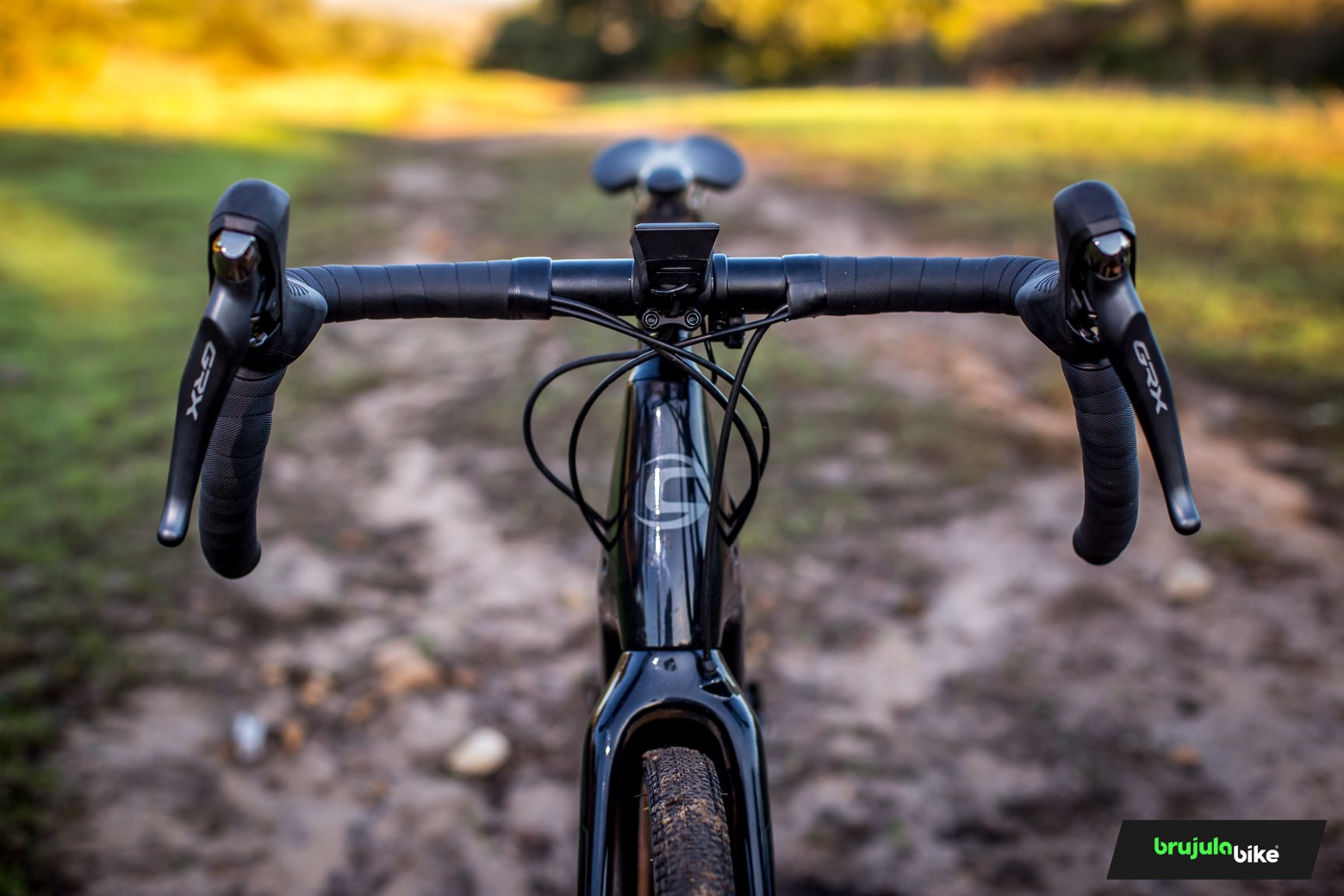 Finally, this one is minor, the seatpost was just the right size. In your case, if your size is tight, you'll have to cut it a bit, but, as we say, we didn't find it to be so tight. 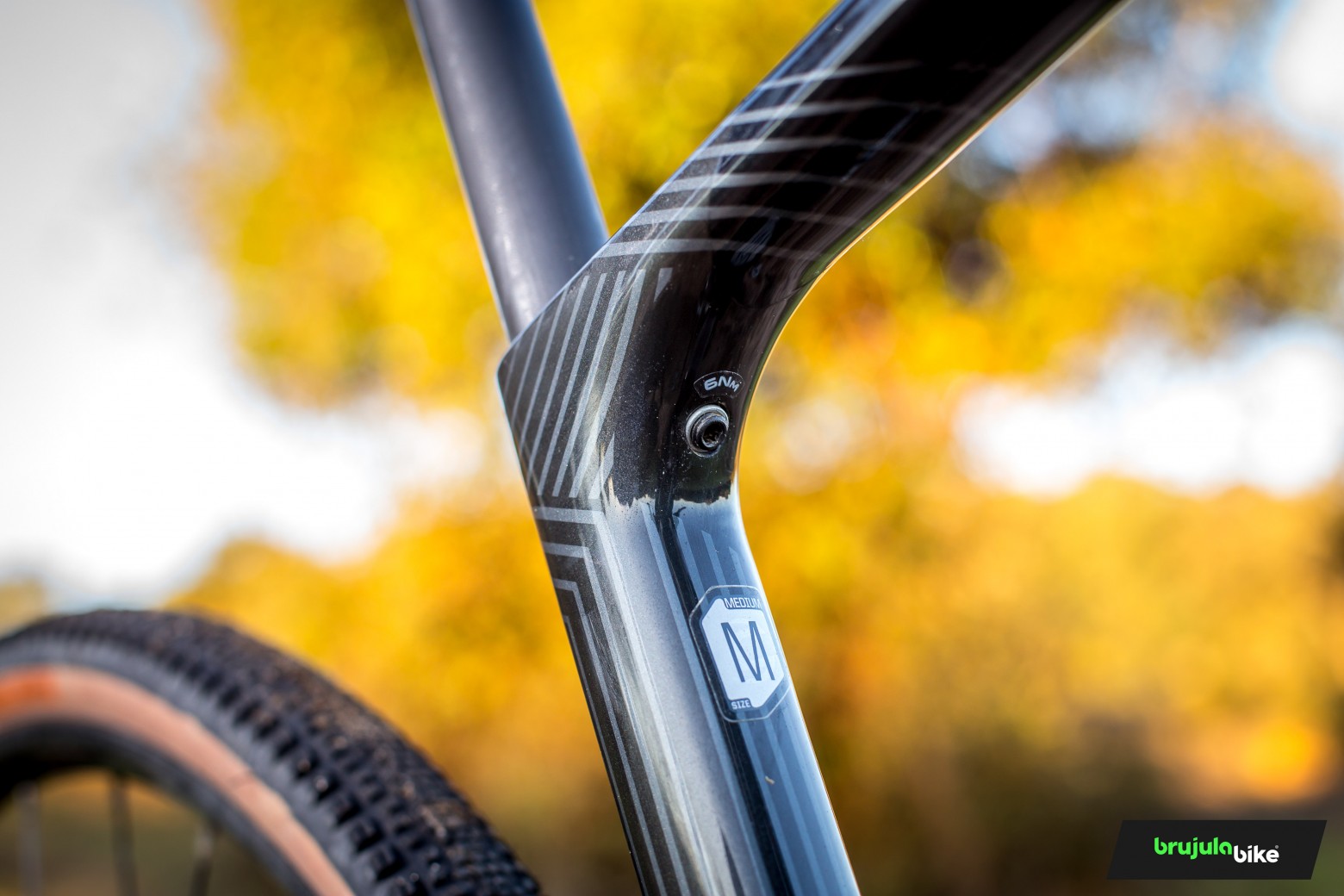 Electrical support and battery of the Cannondale Topstone Neo Carbon

Regarding the two questions we raised in this regard, here are the clarifications.

First of all, we didn't use the turbo for riding ( we did use it for testing), and not because we are very fit. We are passionate cyclists but not professionals. But even on the worst mountain passes, with slopes of around 20% and loose terrain more typical of a mountain bike, with level 2 or, at most, 3, any cyclist could go for a ride. One thing about this: the on-board computer control knob has been brilliantly embedded for left-handed operation, right next to the stem. A wise move, easy to operate even without taking your hands off the handlebars to change the level of assistance. 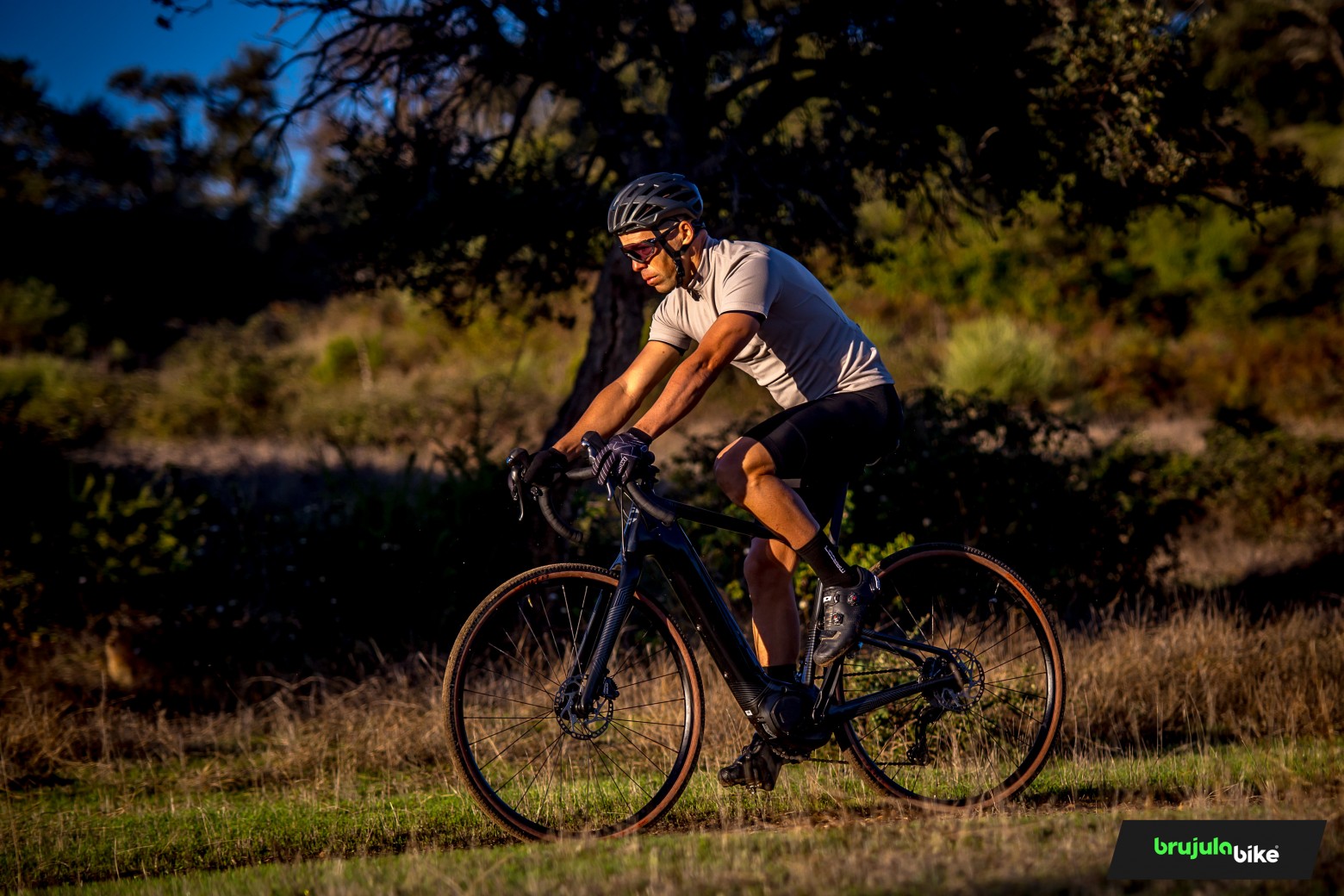 It is true that when you keep it on speed 3, the battery goes down faster, but it has staying power. Although it is noticeable if you squeeze it to those levels, you can rely on this battery. Secondly, in outings of less than 2 hours, we have barely stayed at 75%. This is because it's so light that when riding on the flat, most of the time you're going to turn off the electric assistance, because you won't need it because it's so light.

In short, this Bosch Performance Line CX 250W system with a 500Wh battery is more than enough to provide a sensational experience. We can confirm the 128 kilometres of range it claims, so if you don't use anything on some stretches, you can increase that figure without any problems. In our case, even uphill we didn't use the turbo out of necessity, as we say, which reduces the concern about the autonomy of the Cannondale Topstone Neo Carbon. 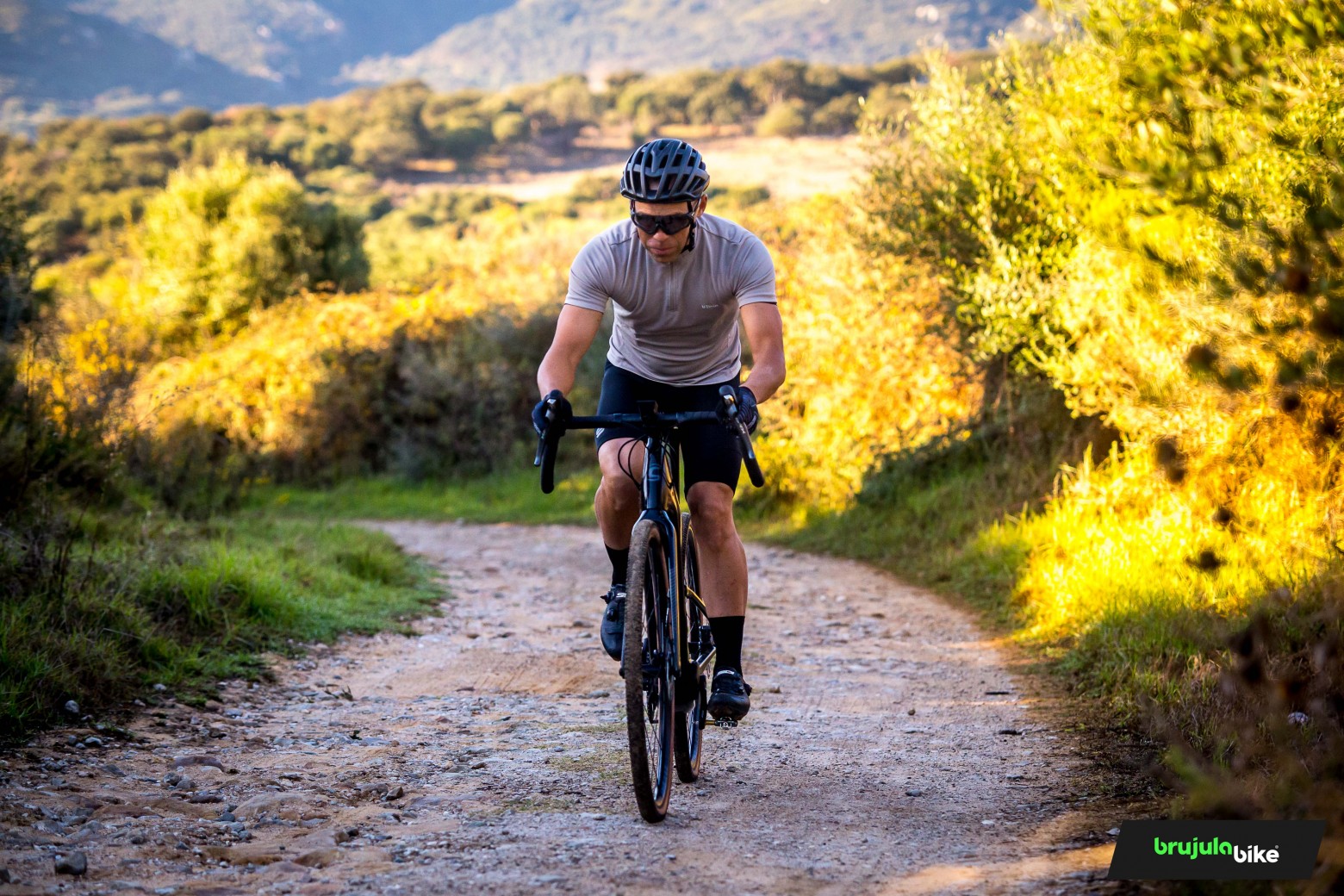 Finally, we were pleasantly surprised by the brakes. The Shimano GRX hydraulic brakes with 160mm discs perform brilliantly. Believe us when we say that we tried to squeeze them. In fact, we thought they would suffer a little at least, given the weight of the bike and the long and very steep downhills we've been looking to push them to the limit, but nothing. At no point did they show any signs of weakening. 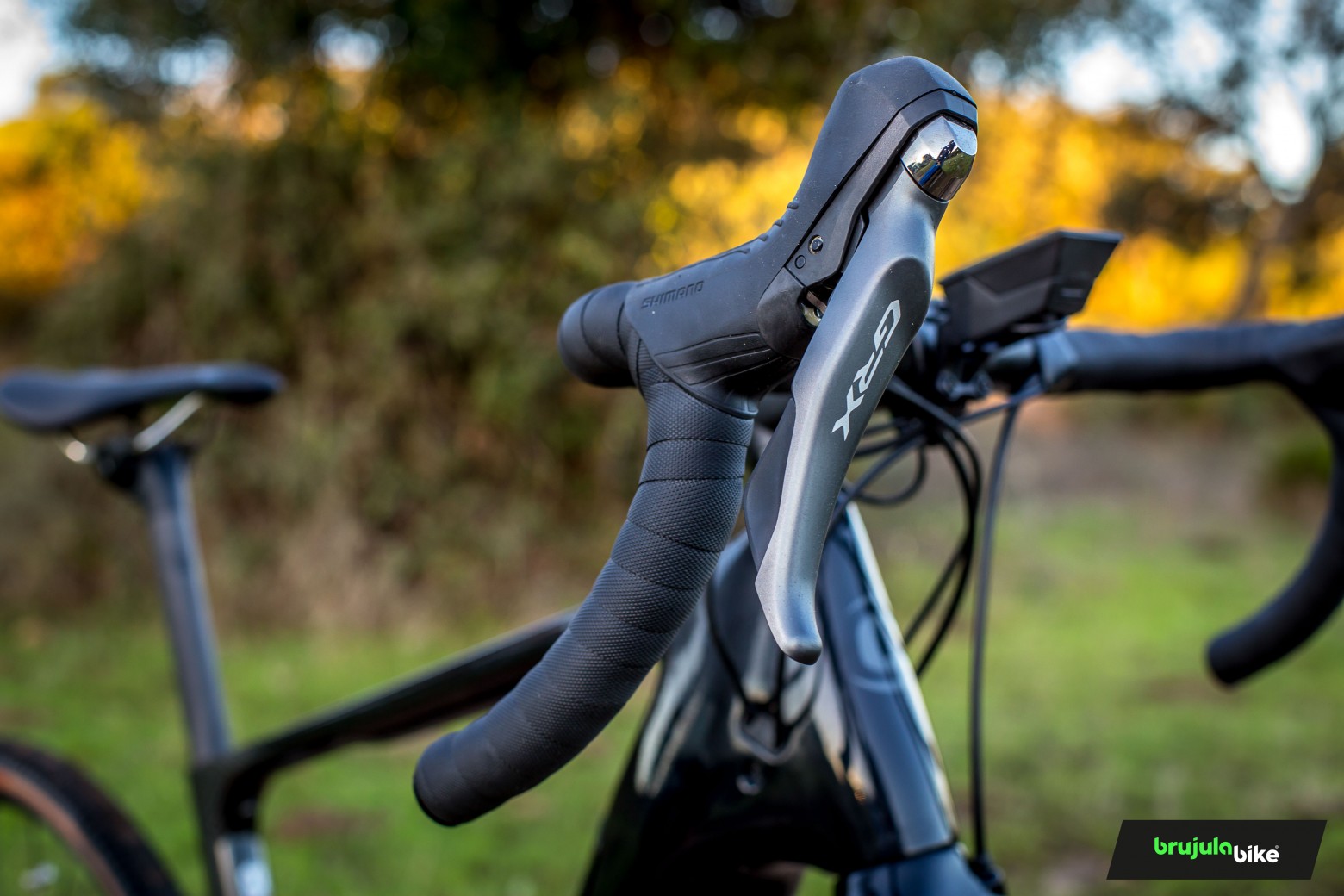 And neither does the Kingpin rear suspension system. It's true that it doesn't have the sensitivity of a shock absorber, as is logical, and that we haven't checked if it reaches the 30mm of travel that it offers, we don't ride with the metre in the middle of an outing. But we did make some tough use of it and it responded well. It gives that little bit of absorption needed on a gravel bike if you want to ride off-road. 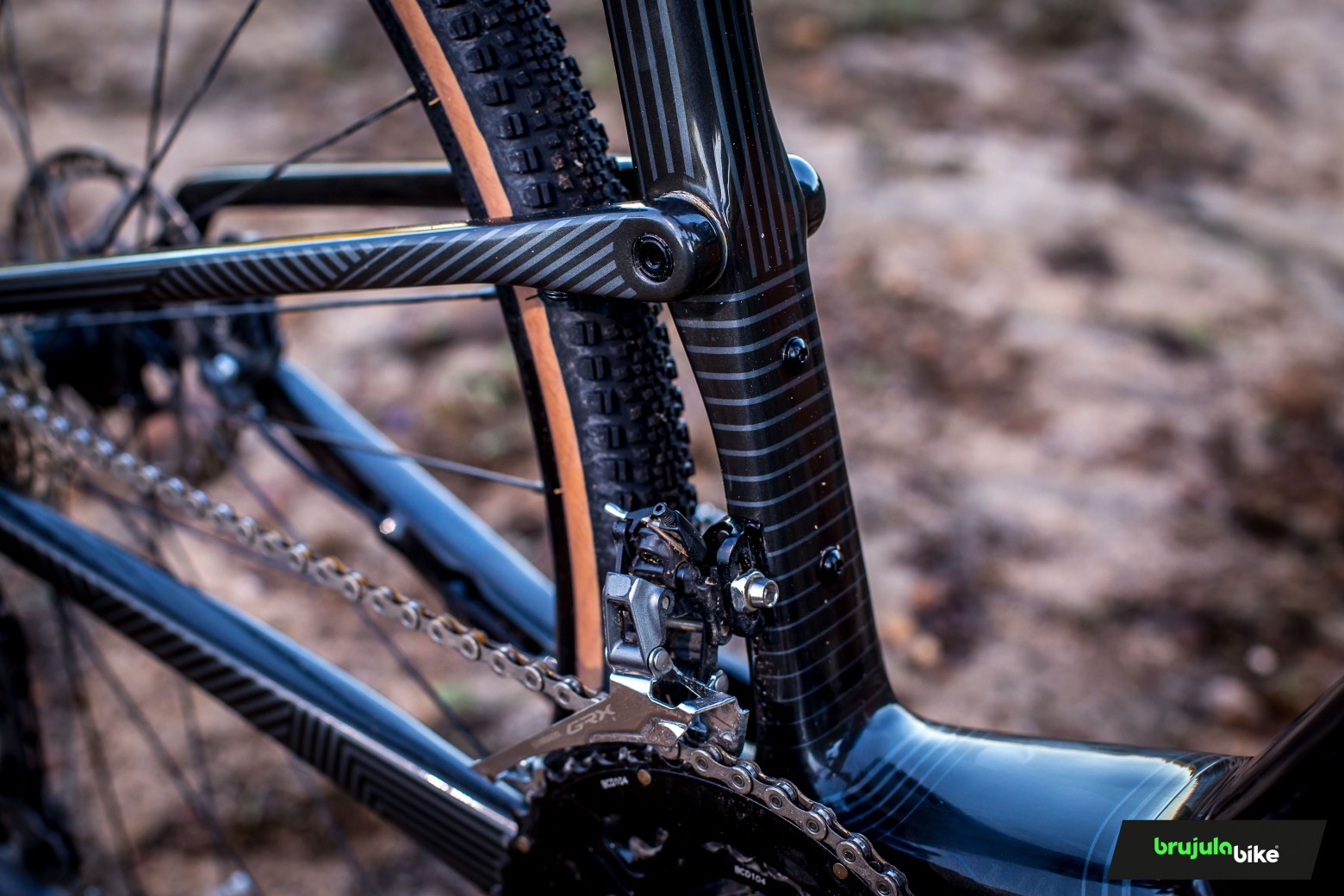 To conclude this review about the best of the Cannondale Topstone Neo Carbon, except for a couple of points for improvement that we'll discuss below, our verdict is a 10 out of 10. An electric gravel bike is a wonderful combination. Possibly the word that best defines this marriage is fun. You're going to be able to ride almost any terrain and you're going to have electric assistance to make it more fun and go further. The WTB Riddler tyres proved perfect for any type of terrain, so you've got no excuse to have fun and enjoy a canyon like this Cannondale Topstone Neo Carbon, a great gravel+electric experience.

Points to improve of the Cannondale Topstone Neo Carbon

But, as usual and as we have done with other models previously, here at Brújula Bike we always look for that slight detail, that small but improvable detail, which serves as constructive criticism and improvement for the future. Because everything can be improved, of course, and at least from our humble criteria, there are two very clear points in this Cannondale Topstone Neo Carbon 2 that make it more gravel than trial, and it is a factor that you should consider when choosing yours.

So, first of all, if we place it in the range, we find the first handicap. On this occasion, it's just that, a handicap. Let's say that this Cannondale Topstone Neo Carbon 2 wins and loses with the rigid fork. That's right, because that rigid fork gives you a lot on rough terrain, but if you're looking for something more off-road, we strongly advise you to go for one of the models that incorporate the Lefty.

For the first time, Cannondale added the Lefty to these electric gravel bikes, but the Cannondale Topstone Neo Carbon 2 comes with a fully rigid BallisTec Carbon fork. And that's the first detail: no matter what anyone says, if you want truly broken terrain, more mountain bike than any other bike, you need a Lefty.

But don't worry, there is good news here: you can opt for that model with Lefty by spending more or less. Yes, strange as it may seem. Of course, there is a superior version, the Topstone 1 Lefty, with 30mm travel Lefty Oliver Carbon fork, but you're already jumping to €7999. So you also have the option of the Topstone Neo Carbon 3 Lefty.

A few details on this point: yes, it costs 500 euros less and incorporates the 30mm Lefty Oliver. But in exchange, you sacrifice other things: the seat will still be Fabric Scoop, but instead of titanium it will have steel rails; the battery drops from 500 to 400Wh and it doesn't have the Bosch Kiox to control it that we've talked about so well, but a Bosch Purion. You also lose a little bit of quality in the hubs and put on slightly wider wheels. As you can see, it's a matter of choosing one or the other, and the decision is determined by the kilometres you're going to ride on tarmac and dirt. 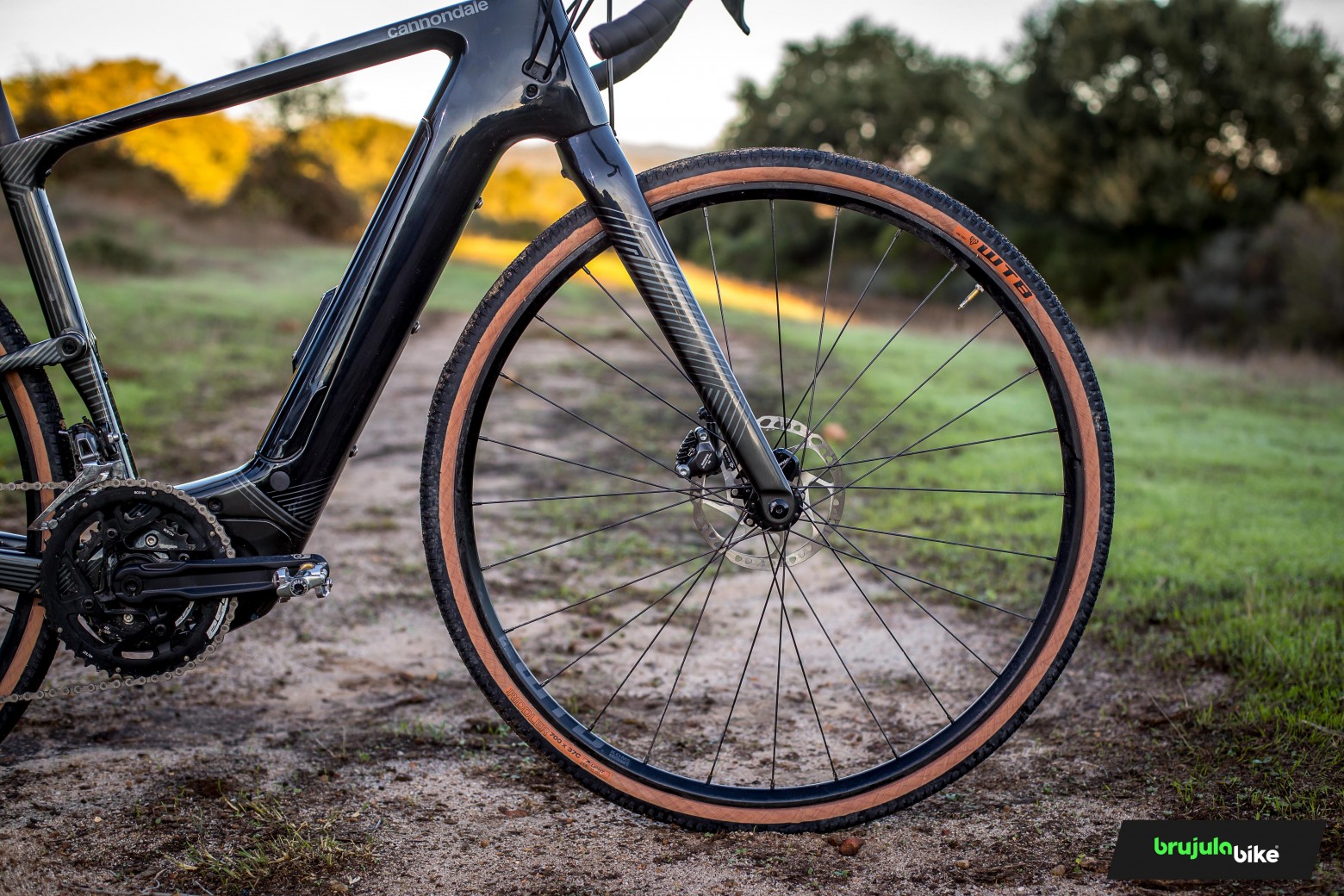 That's not to say that this Cannondale Topstone Neo Carbon 2 didn't get us into every heart-stopping trail, but you lose that point of control and relaxation when you have the Lefty up front that absorbs the unspeakable. On those stretches, it's inevitable that with a rigid fork the shudder will cause some numbness. But, as we say, we're also a bit rough, because for the rest of the terrain, as we said before, no matter how broken and loose it was, it responded optimally. The decision is yours.

Secondly, and this is again a caveat: a single chainring might be more than enough. This is our perception, that of cyclists who love to ride but also have time to eat a good hamburger. We would like to say that our level is medium, at best medium-high, and even so, we have not used the electric assistance because we have not needed it. Almost 90% of the time we used it, we used level 1 or 2. Consider that it has a 3 and a 4, turbo mode. The caveat, again, is with its twin sister, the Topstone Neo Carbon 3 with Lefty, which features this single chainring. 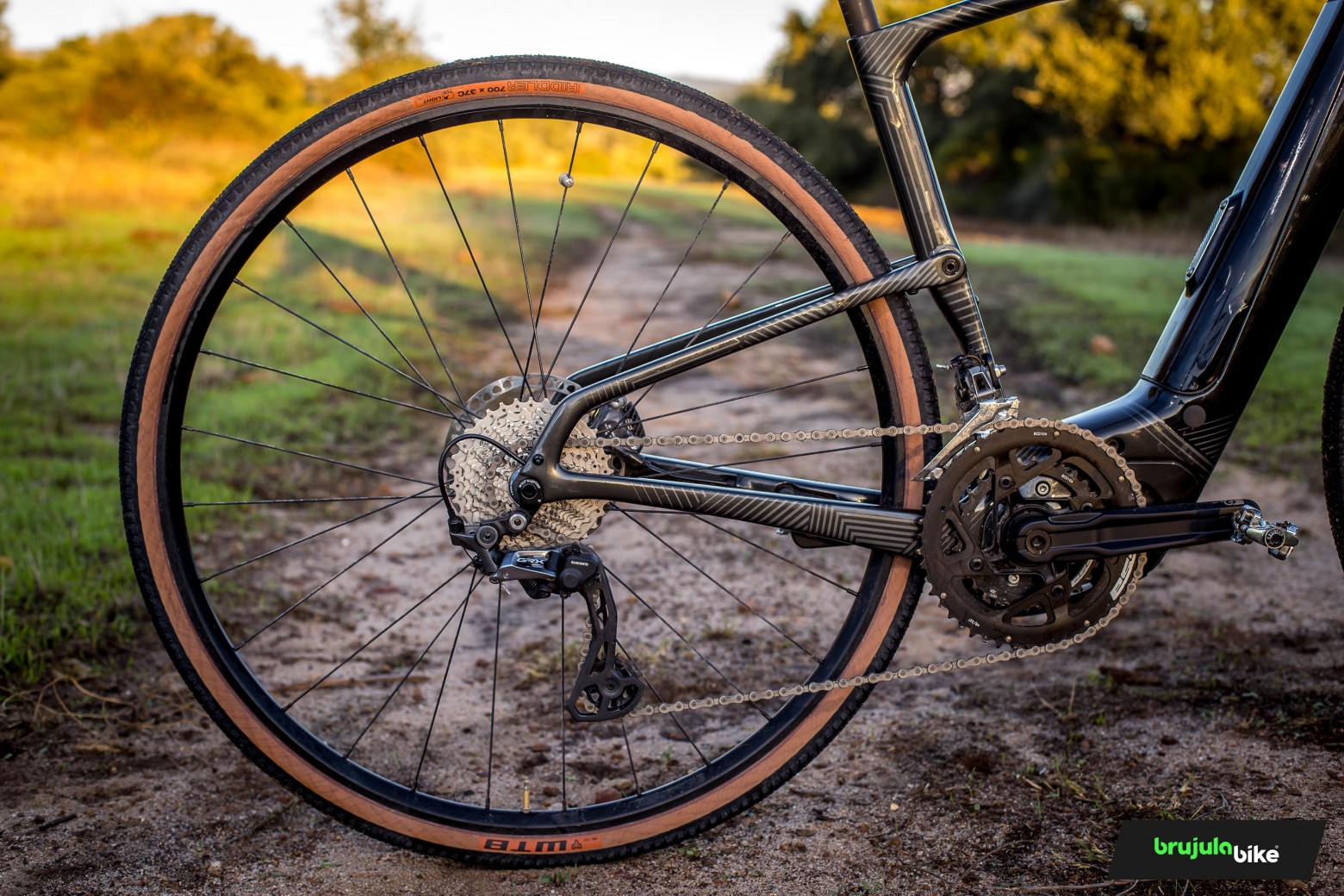 In our case, we think a single chainring would have been enough, because we didn't make the most of the two chainrings. There's a nuance here: maybe if you want to use it without assistance at some point on a climb, you do need a smaller chainring. But if you strictly use it as an electric gravel bike, the Cannondale Topstone Neo Carbon 3 will be great with a single chainring. The good thing about this is that if you buy one and then want the other, at least in the rollout it's enough to swap two chainrings for one or vice versa. This one costs 6599€ as standard, but the range is much more complete and they have considered them for all budgets. So if you want to have fun, there are few excuses left.