With excellent weather conditions, very different from those of Friday in the Short Track, the women's event of the World Cup in Val di Sole took place. Pauline Ferrand Prevot won a World Cup after doing it for the last time in 2015. 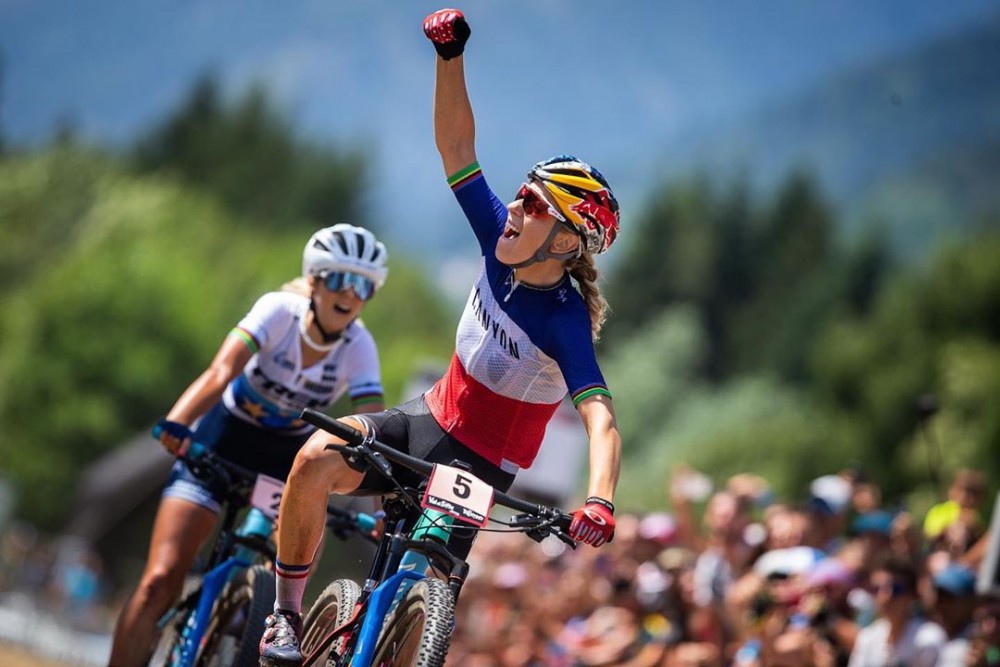 Unlike other occasions, Pauline Ferrand was in charge of leading the race from the start, followed by Jolanda Neff and Sina Frei. Kate Courtney remained a little behind in the first climb but before the end of the first lap was already in third position. And shortly after the beginning of lap 1, she launched a first attack with which she made a first career selection. 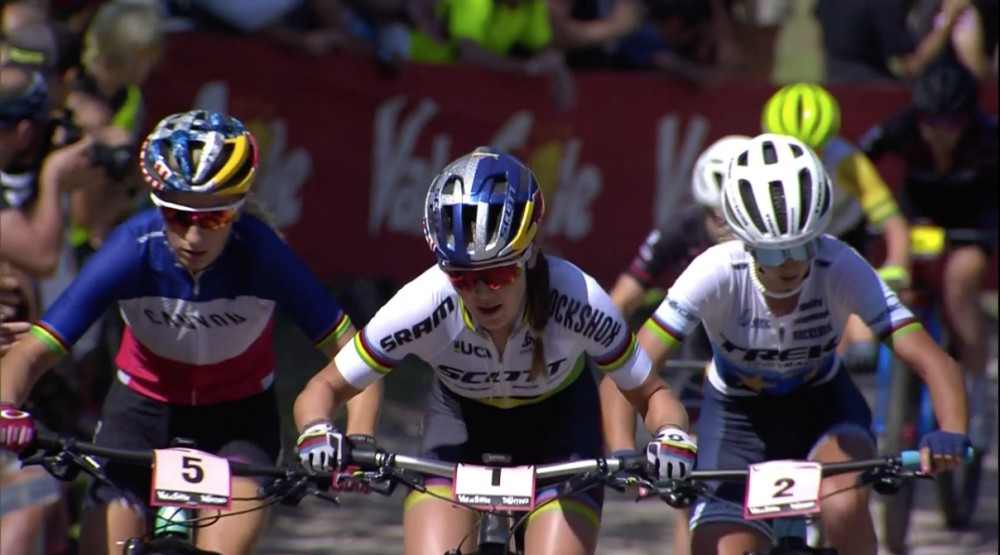 In the circuit of Val di Sole, most cyclists chose full suspension mountain bikes, but Courtney decided to ride with the Scott Scale, rigid, this could be a handicap for her in some areas of the track. 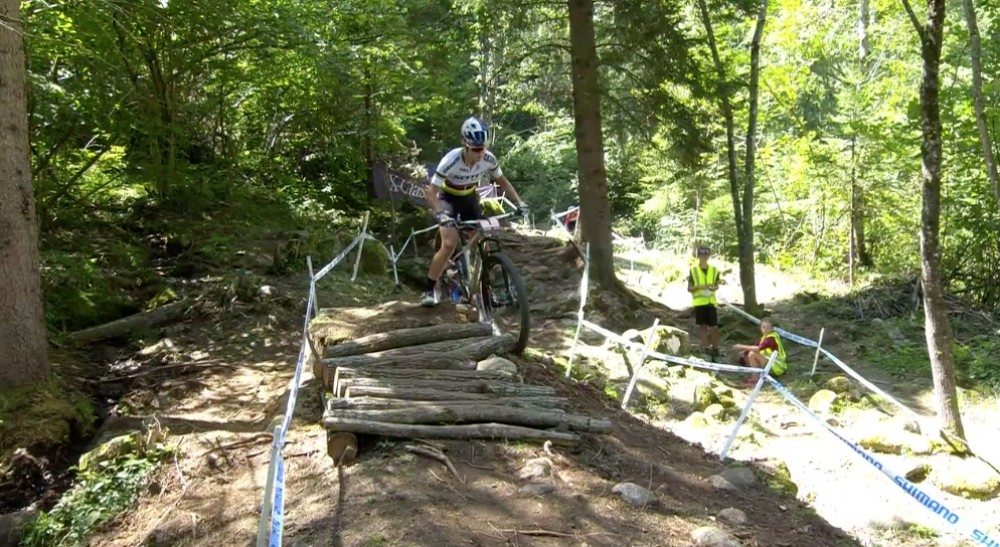 Before finishing lap 1, the race became very frantic with continuous attacks by Jolanda Neff and Pauline Ferrand Prevot, when they both rolled first alone. In the chasing group, at 23 seconds, were Tauber, Frei and MacConnel. Kate Courtney passed more than half a minute from the head at the beginning of lap 2. 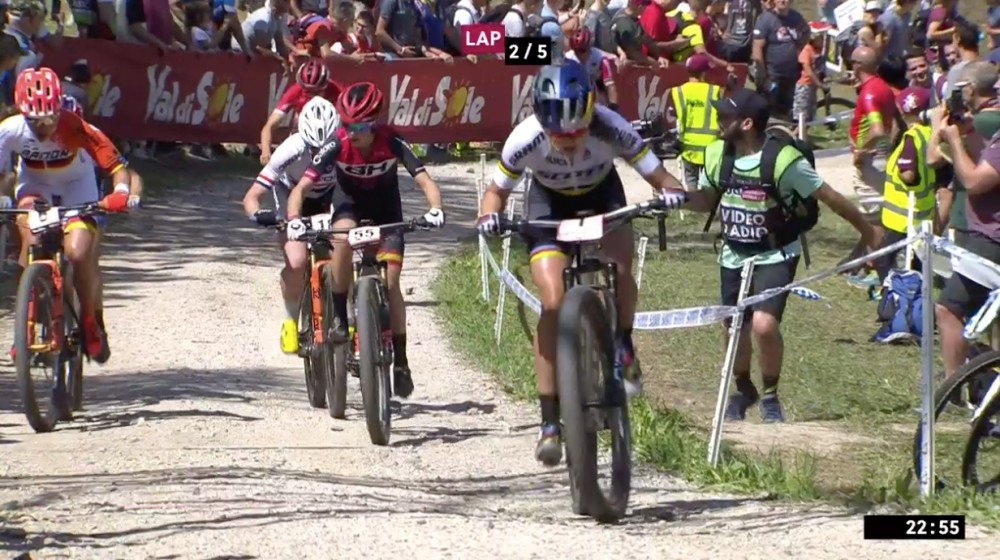 Finally on lap 2 Ferrand Prevot scored the fastest time and managed to open a gap of 18 seconds with Jolanda Neff. The race was very broken despite being 3 laps, Pauline looked very solid and Neff was approached from behind by McConnell. 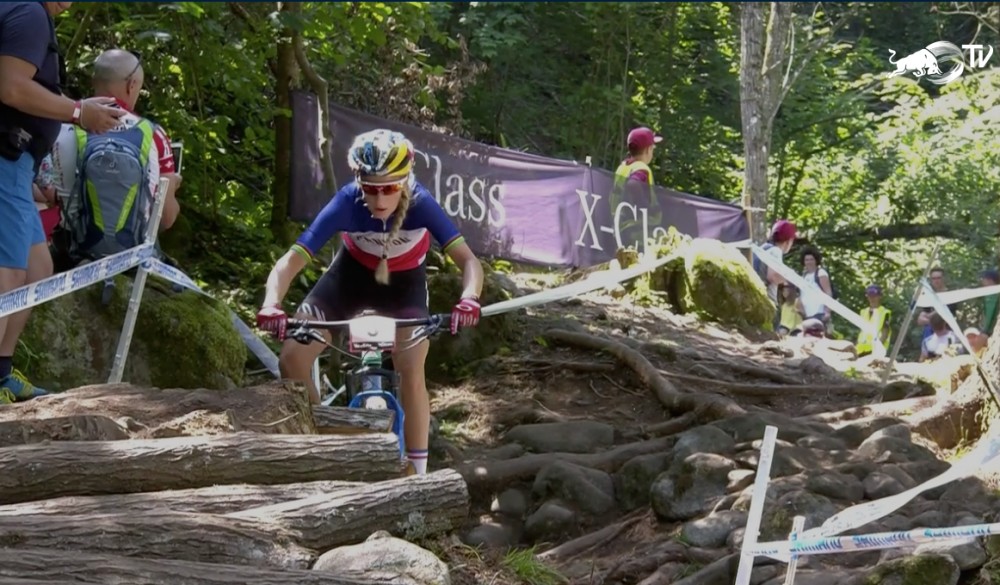 For her part, the Swedish Jenny Rissveds was starring in a great comeback and at the beginning of lap 3 was already third, 48 seconds behind from Pauline and 10 seconds from Jolanda Neff. Ferran Prevot remained first with an advantage of more than half a minute with Jolanda Neff. 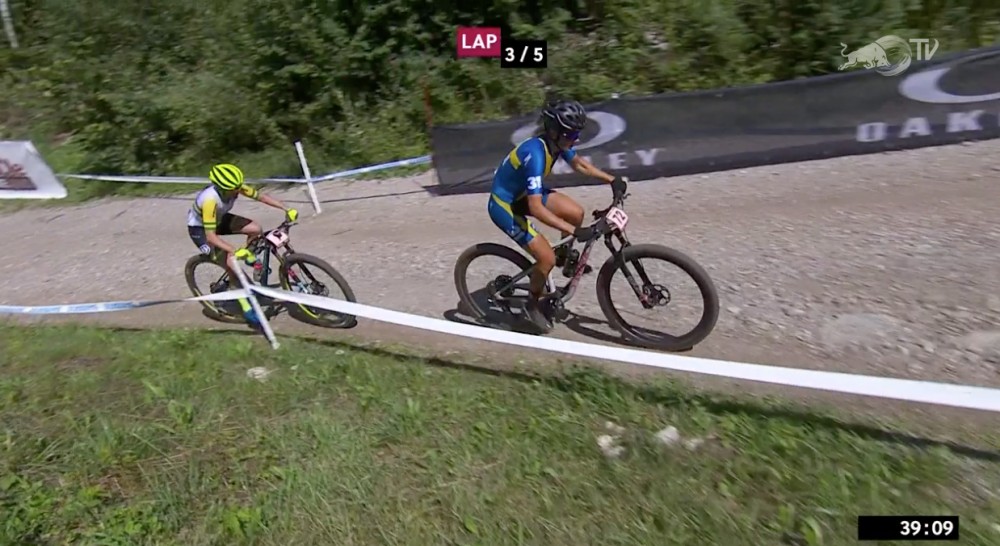 While Ferrand Prevot continued to increase her advantage, Jolanda Neff tried to take off Jenny Rissveds in the downhills, but the Swedish did not let go and in the uphills she put Neff in more and more troubles. 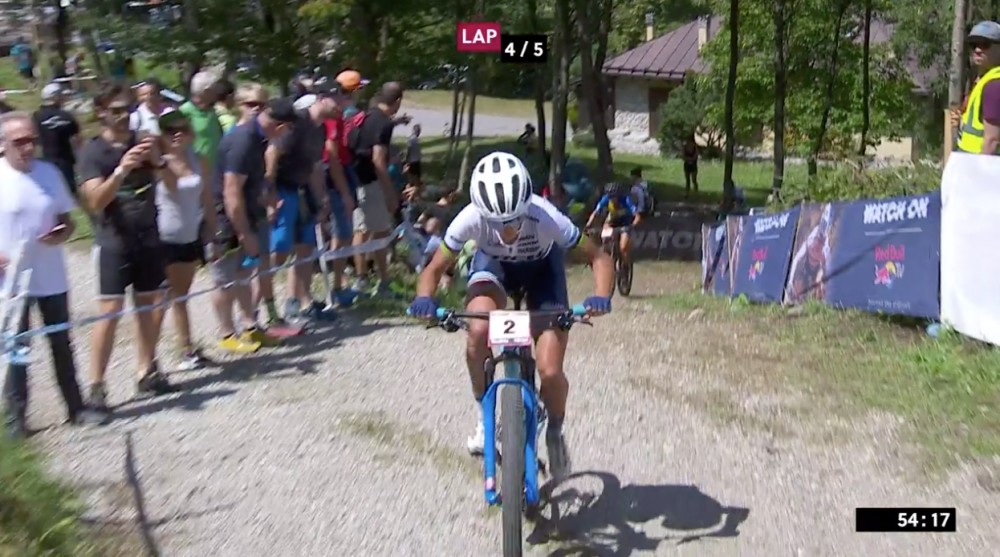 But as she has already accustomed us, Jolanda Neff had an incredible race final. After the ups and downs suffered during the previous laps, Neff recovered and began to mark, from second place, a very high pace. Jenny Rissveds was left behind and in less than a lap Neff cut more than 20 seconds with Pauline Ferrand Prevot. Another end of heart attack was served in Val di Sole. 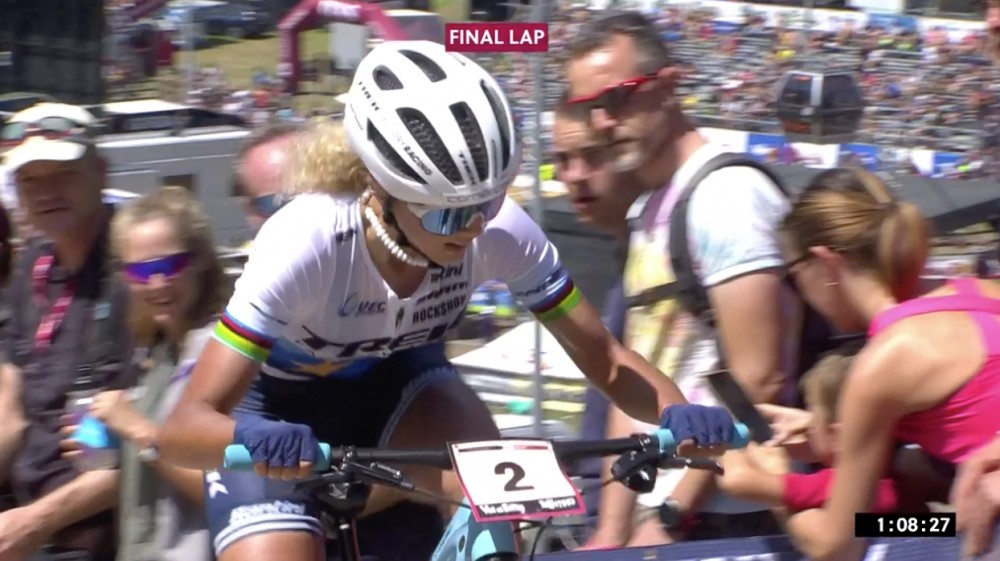 On the last lap the tension was very high, there was a real chase and despite of a couple of failures in technical climbs, Jolanda Neff kept cutting seconds with Pauline. Just behind, in the third position, Jenny Rissveds struggled to keep her place on the podium while Yana Belomonia increased the pace to reach her. 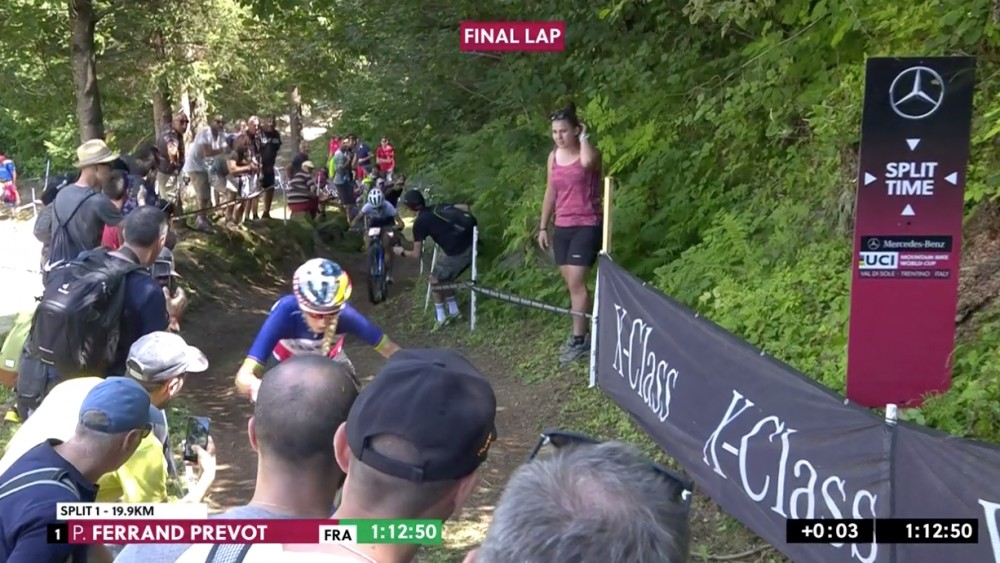 In one of the last downhills, Jolanda Neff reached Pauline and passed her just before the stretch of Pump Track, but the French recovered the position in the middle of a climb. Both came forward again and again in the last lap. But finally everything was resolved in the sprint. 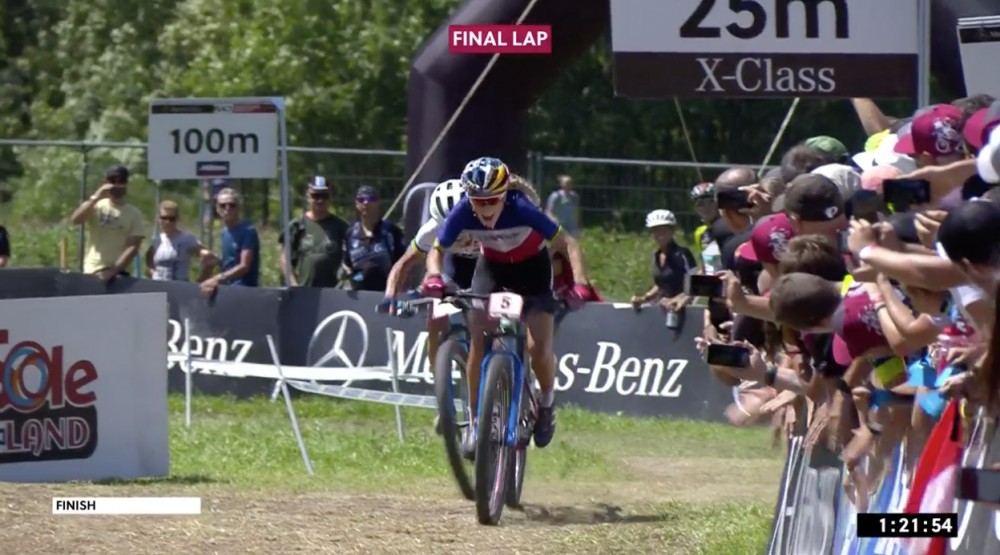 With this result Jolanda Neff takes the leadership of the World Cup after a bad day for Kate Courtney who finished in position 17. 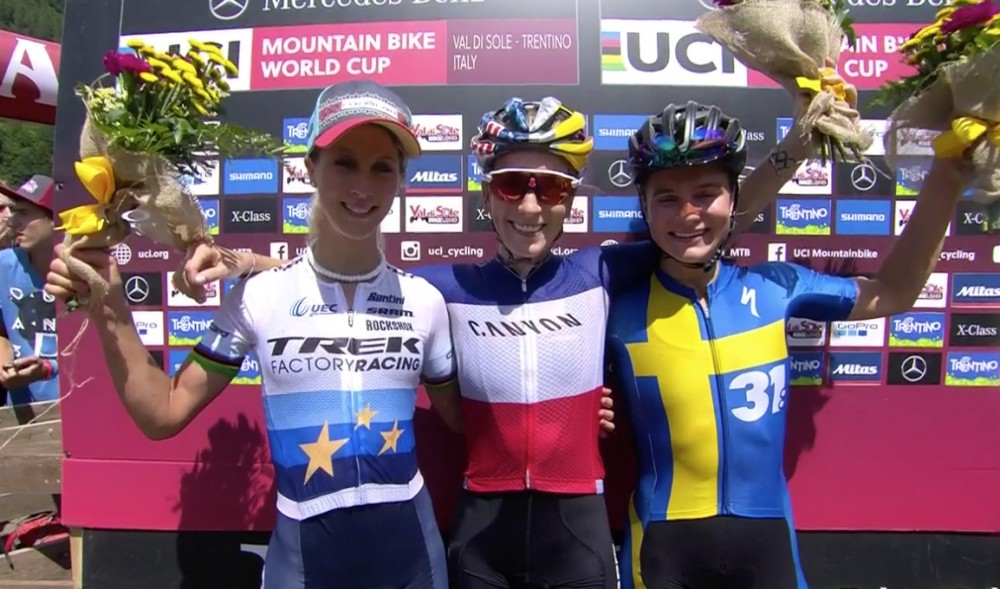 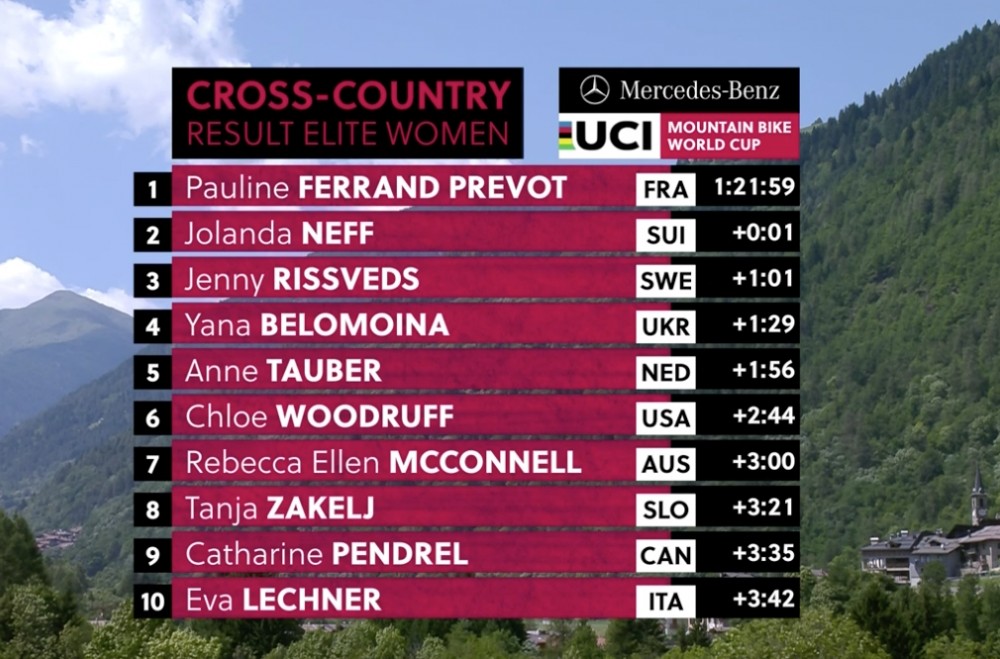